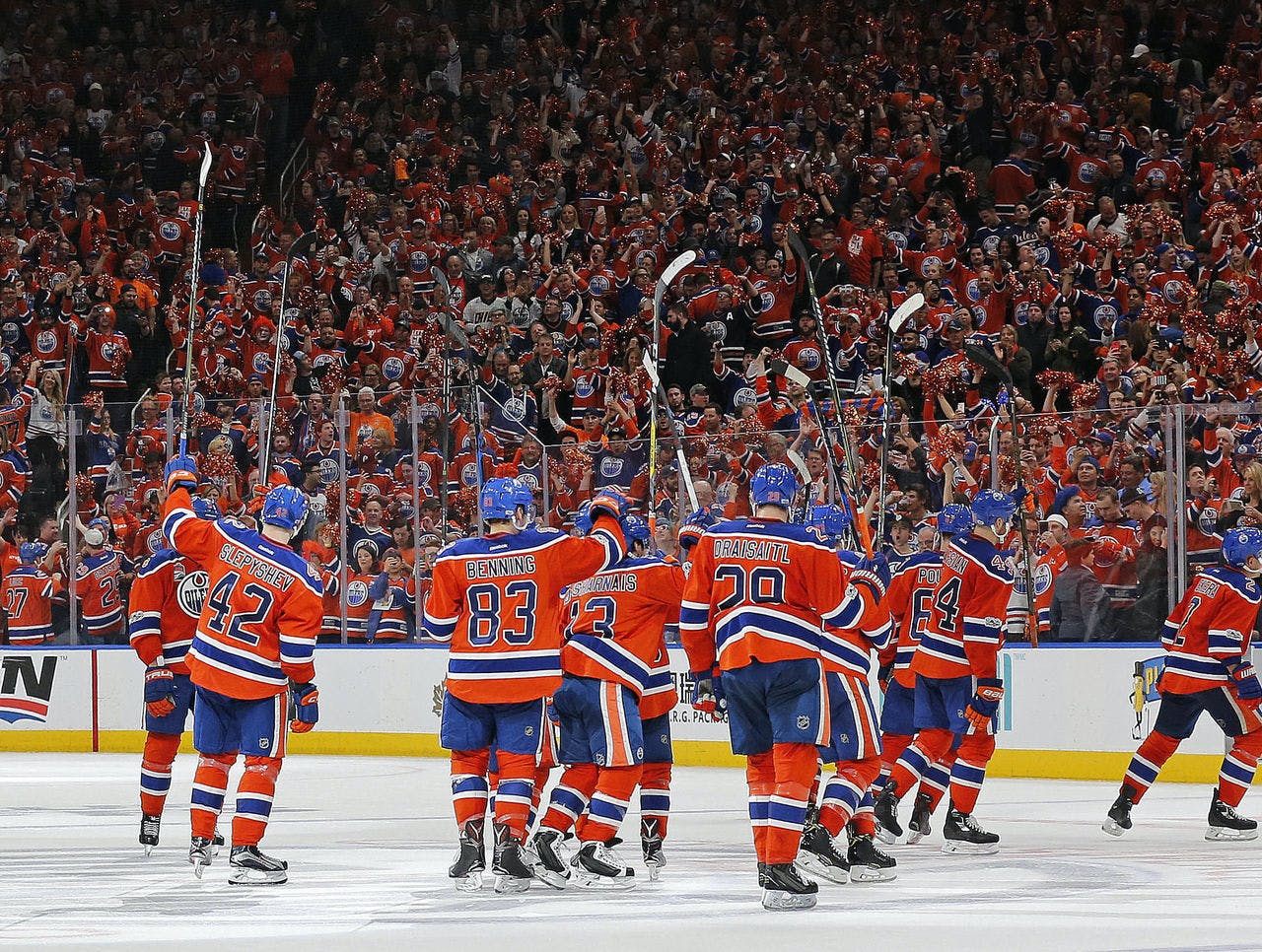 By Cam Lewis
9 months ago
The Edmonton Oilers have been playing some of their best hockey in years over the past few weeks.
Since a three-game lull back in early March, Jay Woodcroft’s Oilers have buckled down and have put together an 11-2-1 stretch that has the team in second place in the Pacific Division.
Edmonton’s win in San Jose Tuesday got me thinking about the 2016-17 Oilers, who, of course, beat the Sharks in the first round of the playoffs that season. If you had asked me two months ago which Oilers team was the best of the Connor McDavid era, I would have said that it was the 2016-17 squad and that it wasn’t even a contest. Now? I’m not so sure.
There are a lot of parallels to draw between this year’s team and the 2016-17 Oilers.
Both teams flew out of the gate and had five-game winning streaks in October. They also hit an ugly stretch as the weather got colder. As we know, this year’s Oilers had a miserable stretch in which they won two of 15 games between December and January. The 2016-17 team also had a poor stretch in which they won seven of 22 games in November and early December.
After 71 games, this year’s Oilers are slightly better than the 2016-17 team was. The current Oilers own a 41-25-5 record, good for 87 points, while the 2016-17 team had a 38-24-9 record, good for 85 points, at this point in their season.
The 2016-17 team was red-hot to finish the season, as they won 12 of their last 14 games en route to becoming the first Oilers team to hit the 100-point mark in a season for the first time since the 1980s. If this year’s team continues to play as they have been over the past few weeks, they’ll likely crack 100 points as well.
That brings us to this week’s What Would You Do Wednesday question! Which team is better? The 2021-22 Oilers or the 2016-17 Oilers? Is this year’s group the best of the Connor McDavid era?
To start, let’s go through the major statistics… 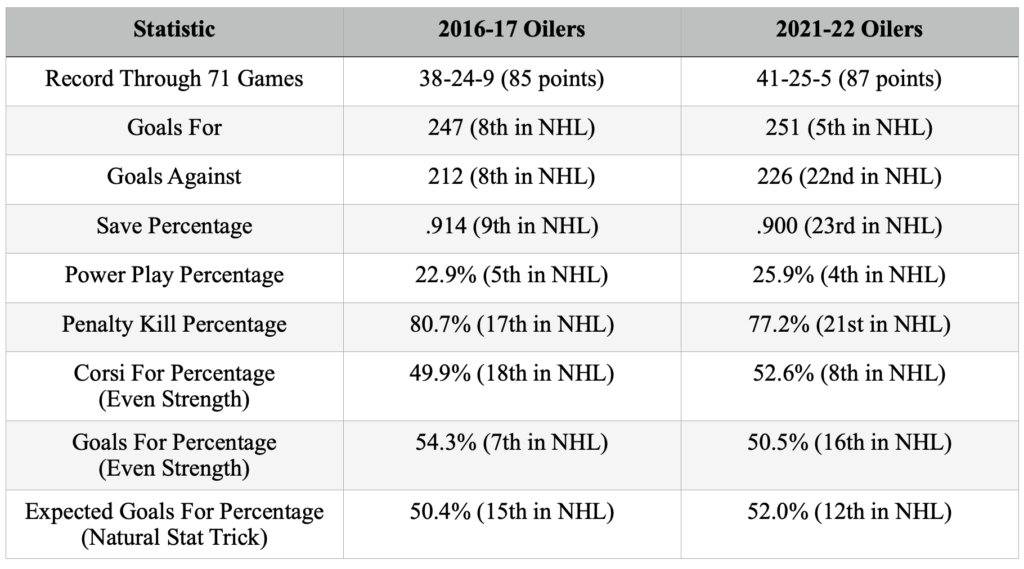 In terms of raw wins and losses, this year’s team is better through 71 games by three, but the 2016-17 team is only two points back because they lost more games in overtime. Regardless, both teams were in a very similar position in the standings at this stage of their respective seasons.
The 2021-22 team has already scored more goals through 71 games than the 2016-17 team did through the entirety of the 82-game schedule, but they’ve also allowed more goals already. Unsurprisingly, the 2016-17 team had a higher team save percentage than this year’s team does, as Cam Talbot was much better that year than any goalie the Oilers have currently.
The special teams numbers are remarkably similar, as both teams were towards the top of the league in terms of power play percentage and both teams were below league average on the penalty kill. The current team scores more on the power play but they also allow more goals on the penalty kill, which isn’t surprising because of the discrepancy with goaltending that I mentioned above.
And then we have the underlying numbers, in which this year’s team is clearly ahead. The 2016-17 team got criticized by outside observers for having poor shot metrics and overachieving at even-strength based on good shooting and good goaltending. This year’s team is actually underachieving their underlying numbers, as their actual goals for percentage is lower than the expected goals for percentage that Natural Stat Trick came up with based on shot volume and quality.
Next up, let’s go through the rosters on paper… 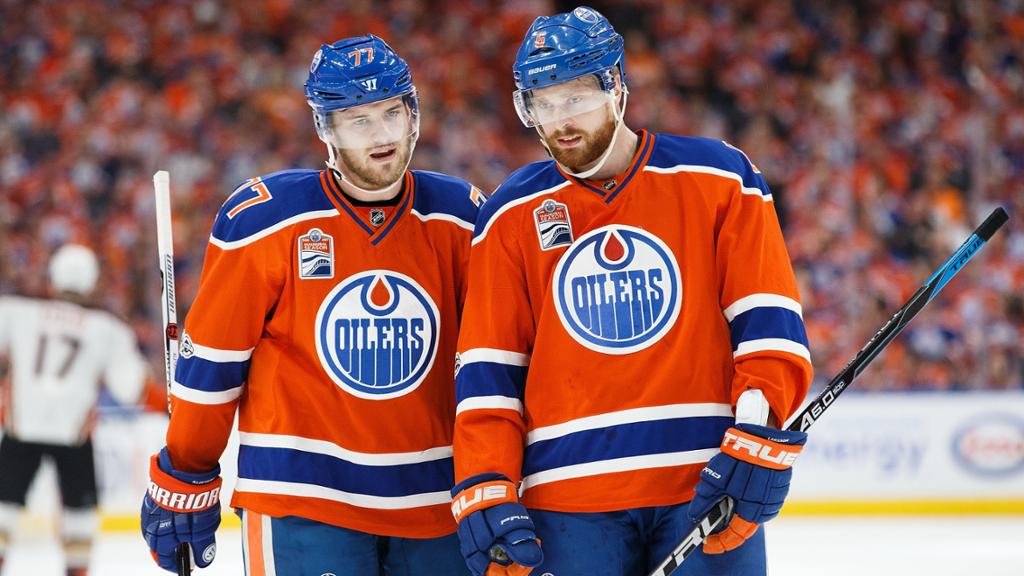 There are seven players who are still around from the 2016-17 team.
Connor McDavid and Leon Draisaitl broke out that year, as McDavid scored 100 points and won the Art Ross Trophy and Hart Trophy for the first time, while Draisaitl proved that he was the Evgeni Malkin to McDavid’s Sidney Crosby with a 77-point campaign of his own.
Ryan Nugent-Hopkins, the forever Oiler, scored 43 points, Darnell Nurse was in his second full season in the league but played in only 44 games due to injury, Kris Russell was manning the team’s second defensive pairing with Andrej Sekera, Zack Kassian was in his first full season with the club, and Jesse Puljujarvi played in 28 games as an 18-year-old rookie.
The 2016-17 team featured good scoring depth. McDavid led the way with 30 goals and Draisaitl was right behind him with 29, but three other players, Pat Maroon, Milan Lucic, and Jordan Eberle, cracked the 20-goal plateau, while Nugent-Hopkins and Mark Letestu were right behind them with 18 and 16 respectively. Seven forwards who could score goals? That’s a good mix.
As good as that team was at scoring goals, the offensive punch this year is better. McDavid and Draisaitl are veterans now who have 41 and 50 goals respectively, and Evander Kane has 16 goals in 32 games with the Oilers, which is a 50-goal pace. Zach Hyman has already broken the 20-goal mark and Kane and Kailer Yamamoto aren’t far behind. Puljuajrvi and Nugent-Hopkins are also solid contributors with 13 and 10 goals each.
So, ultimately, this year’s group has better versions of McDavid and Draisaitl along with depth that’s just as good, likely better.
We don’t have to get into the goaltending, as neither Mike Smith nor Mikko Koskinen is as solid of an option as the 2016-17 version of Cam Talbot, who put together an incredibly impressive .919 save percentage over the course of 73 games. That said, I would take the trio of Smith, Koskinen, and Stuart Skinner over the trio of Talbot, Laurent Brossoit, and Jonas Gustavsson.
The thing that’s up in the air for me is the defence. I’m not as comfortable with this year’s top-four of Darnell Nurse with Cody Ceci and Duncan Keith with Evan Bouchard as I was with 2016-17 top-four of Oscar Klefbom with Adam Larsson and Andrej Sekera and Kris Russell. I would take this year’s third pair of Brett Kulak and Tyson Barrie over 2016-17’s third pair of Nurse and Matt Benning, and I prefer the current depth options of Russell, Philip Broberg, and Markus Niemelainen to the likes of Eric Gryba and Griffin Reinhart.
When it’s all said and done, I think I lean towards the current team. The goaltending makes it a bit tricky, but this year’s group features a lot more firepower than the 2016-17 team did, partially due to McDavid and Draisaitl developing into elite veterans, but also because of the group that Ken Holland has assembled.
The 2016-17 team got shut down by Ryan Kesler and the gritty Anaheim Ducks in the second round of the playoffs that spring. I don’t think we’ll see this team get shut down like that. If they come undone, it’ll be because they can’t keep the puck out of the net.
What say you, Nation? Which team is better? The 2021-22 Oilers or the 2016-17 Oilers? Is this year’s group the best of the Connor McDavid era?

During this time of the pandemic, Oodle Noodle will be donating a portion of all takeout and curbside delivery sales will be donated to local charities on a weekly basis. To order pick up, call into the store directly or order at the till. If you’re staying in and practicing your social distancing, no-contact delivery is available at www.oodlenoodle.ca.