WWYDW(FE): Trading For A Veteran Defender 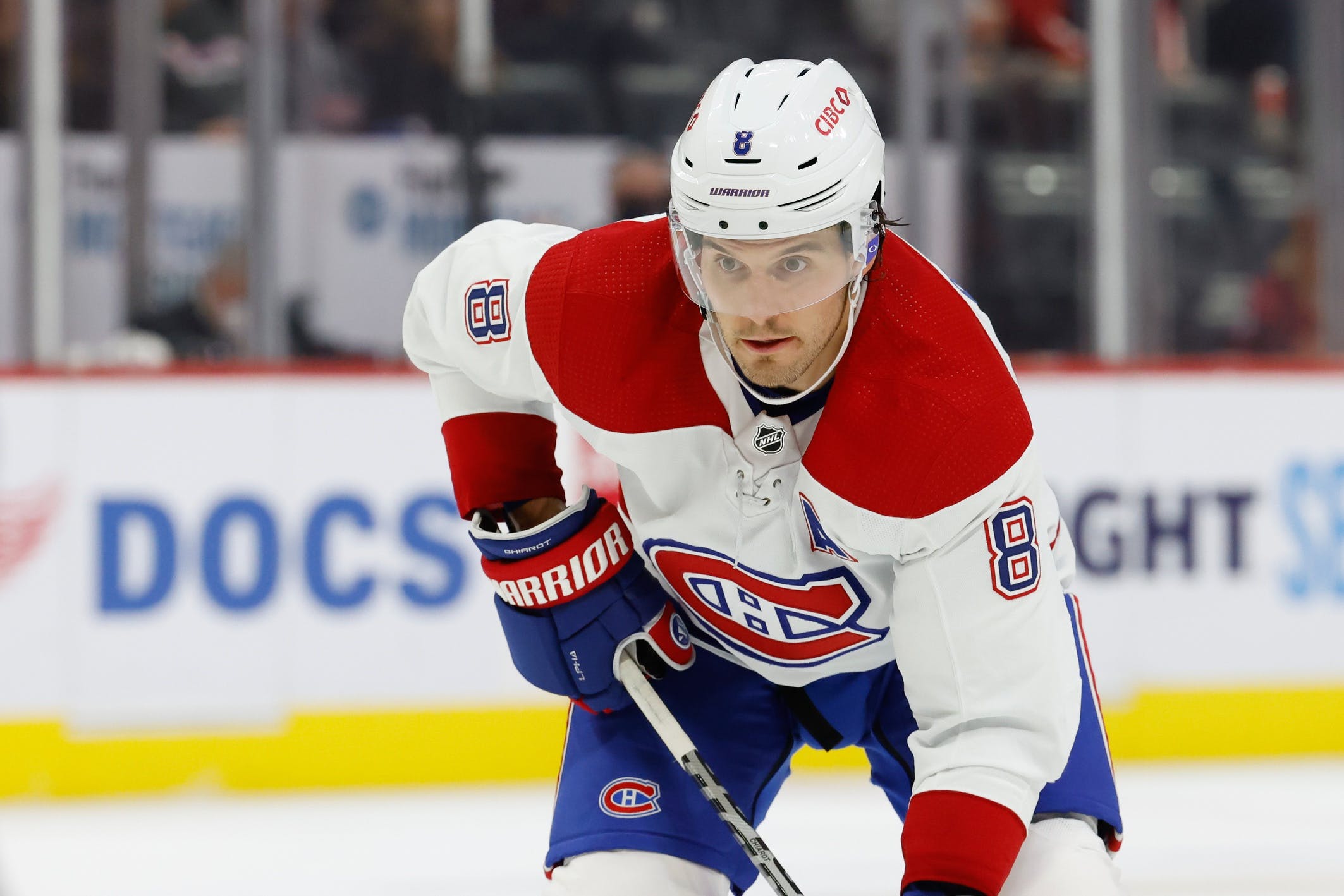 By Cam Lewis
1 year ago
The Oilers were dealt a big blow on Friday morning when word came out that both Darnell Nurse and Slater Koekkeok were headed to the Injured Reserve.
For a team with a blueline that’s already an enigma when fully healthy, this is going to be a difficult situation to navigate. That’s especially the case when it comes to Nurse, who’s logging 26:06 per night on Edmonton’s top pairing.
Edmonton’s right side of Evan Bouchard, Cody Ceci, and Tyson Barrie remains intact, but the left side becomes very thin without Nurse. Duncan Keith will have to take on more minutes, Kris Russell will be brought in from the press box, and rookie Philip Broberg might wind up being thrown into the deep end.
On Friday’s episode of The Jeff Marek Show, Elliotte Friedman talked about how he figured that Ken Holland will be willing to go all-in ahead of this year’s trade deadline. He specifically mentioned the left side of the blueline as a place that Holland would likely be looking to add…

Marek: If you’re Ken Holland, are you putting everything on the table for the team this year? The first-round draft picks, the high-level prospects, former first-rounders. All of it. If you’re Ken Holland, are they all available this year?
Friedman: Holland said earlier this year on the Oilers propaganda show with Bob Stauffer that if they’re in it, he’ll trade his first-round pick. They’re in the race. There’s no question. So yes, I do think that’s possible.
I look at their roster and I can see them adding someone like Ben Chiarot on the blueline. The other question for them is in goal. Mike Smith is competitive, he’s a better player at this stage of his career than any of us thought he would be, but the issue is can he stay healthy. Only Ken Holland and the Oilers know the answer to that.
… To me, the questions are left defence, goalie, and does he go for a depth forward, like another centre or something.

That brings us to this week’s What Would You Do Wednesday FRIDAY EDITION question. Given Edmonton’s recent injuries, should Holland look to bring in a veteran defender earlier than anticipated? Or are the Oilers better off seeing what Broberg can do before making such a move?
The name that Friedman brought up specifically was Ben Chiarot, a shutdown defender on the Montreal Canadiens. (Unrelated, but there’s something about his name that reminds me of the 2017-18 and 2018-19 Oilers.)
The Habs have fallen completely flat since their shocking run to the Stanley Cup Final last spring. They’re 4-13-2 and climbing out of that hole is going to be a huge task.
Chiarot is one of three Montreal defenders, Brett Kulak and Chris Wideman being the others, who are set to become unrestricted free agents at the end of the season. If things continue going they way they are for Montreal, the Habs will surely be sellers, and Chiarot is their most significant rental option to move.
Through 19 games this season, Chiarot is second to only Jeff Petry on the Habs in ice-time, logging 23:02 per game. He logged 21:47 per game for the team last year during the regular season and was leaned on heavily in the playoffs, logging 25:15 per game, the most of any Habs defender.
We don’t often see trades made in November but we could certainly see Holland pull the trigger on a deal well before the trade deadline, which is on March 21. For example, years ago, Kevin Lowe went out and added Jaroslav Spacek in late January, well before he acquired Dwayne Roloson and Sergei Samsonov for the team’s playoff run.
The challenge with making a deal this early in the season is that we don’t yet know which teams are going to be selling. Arizona is an obvious one as they’re 2-13-2 and never had any aspirations of winning games this season. Outside of them? Montreal seems likely. Seattle seems like a possibility after their ugly start. 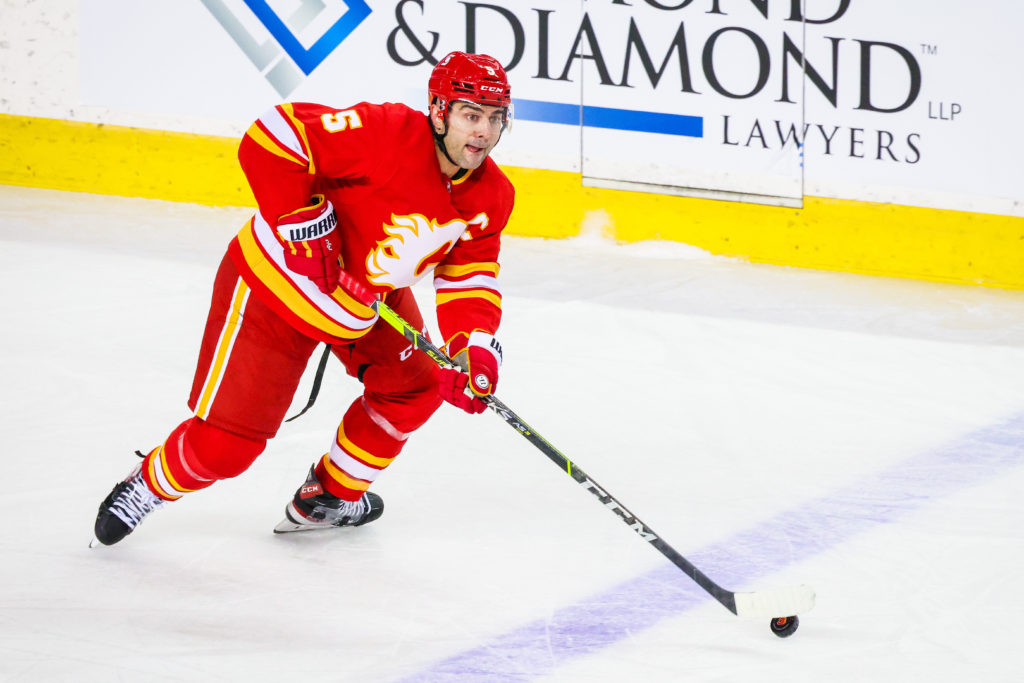 Apr 19, 2021; Calgary, Alberta, CAN; Calgary Flames defenseman Mark Giordano (5) controls the puck against the Ottawa Senators during the second period at Scotiabank Saddledome. Mandatory Credit: Sergei Belski-USA TODAY Sports
If the Kraken wind up being sellers, there’s one soon-to-be free agent name really stands out as a potential addition to boost Edmonton’s blueline — Mark Giordano.
Wouldn’t that be something? Imagine the long-time Flames captain playing in Edmonton? Reaching his 1,000th career game as a member of the Oilers? Edmonton and Calgary meeting in the playoffs with Giordano getting into it with Matt Tkachuk? Sounds like a blast.
Anyways! We won’t get too far ahead of ourselves here.
The Oilers will move forward and look to navigate Nurse’s injury by giving Keith more minutes and by seeing if Broberg is ready for NHL duty. It’s going to be a challenge but the hope is that the team can get by with internal options because making a trade right now won’t be easy for Holland. Everybody knows the situation he’s in with Nurse out and the asking prices would naturally be exorbitant as a result.
Eventually, though, it’s reasonable to assume Holland will need to make an upgrade on the blueline if the Oilers are going to go on a deep playoff run. Even when fully healthy, the team’s defence has been suspect and adding a high-quality veteran defender could be a game-changer.
What say you, Nation? Should Holland be looking to add a veteran defender well ahead of the trade deadline? Which defencemen do you think he should target? Can Broberg be the internal option the team is looking for? Let us know!