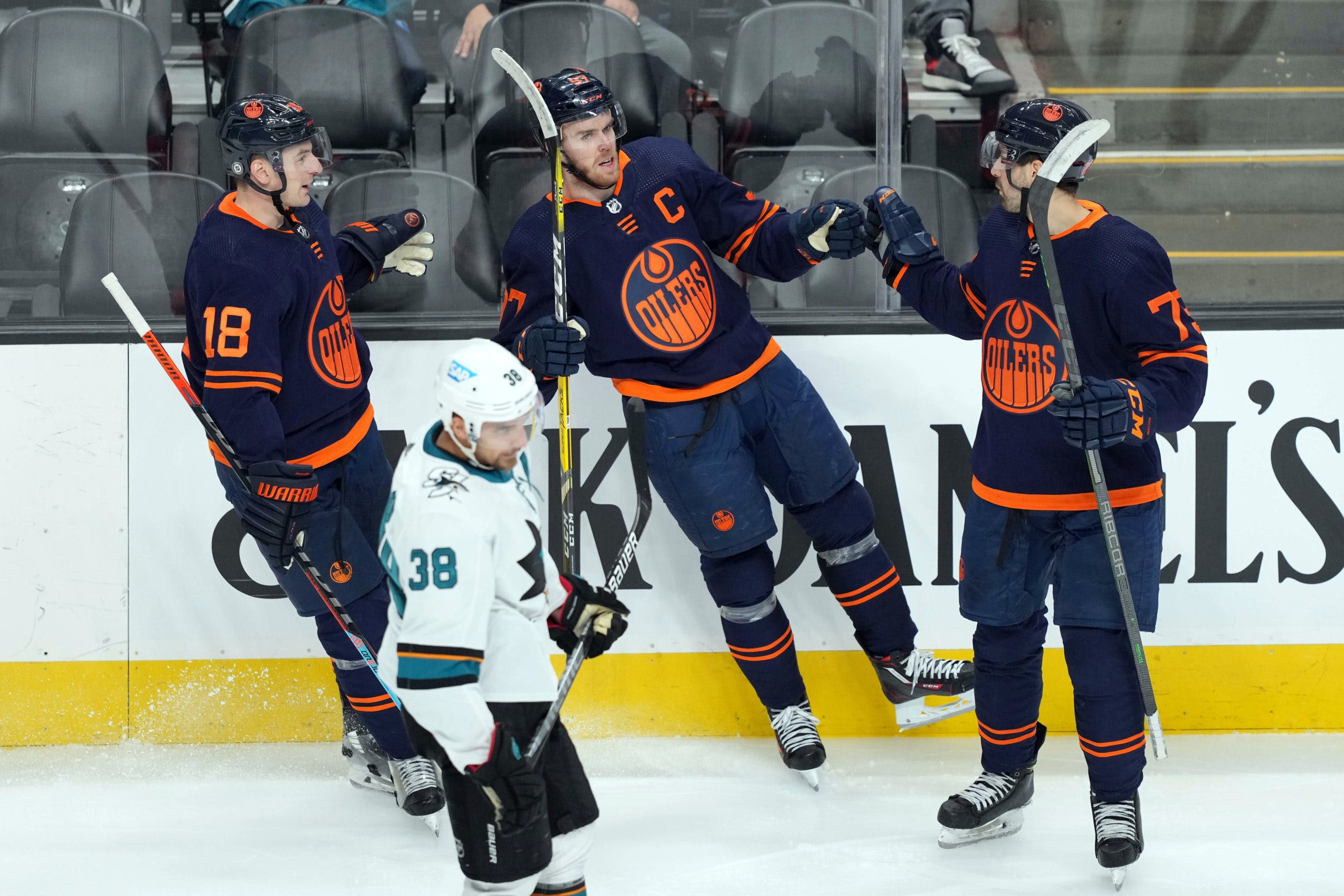 Photo credit: Darren Yamashita-USA TODAY Sports
By Zach Laing
11 months ago
Comments
Now that’s how you play a hockey game. Final score: Oilers 3-0.
Was that the most complete game the Oilers have played all year? Very well could be. BaggedMilk has the Wrap Up here.

another doink! this one’s deflected in by derek ryan. 2-0 oilers. pic.twitter.com/QzIQbvcFrU

i don’t think evander kane is getting a thank you video in his return to san jose pic.twitter.com/ugUughLXF4

i don’t think evander kane is getting a thank you video in his return to san jose pic.twitter.com/ugUughLXF4

the oilers have a three-on-one *on the penalty kill* but can’t score pic.twitter.com/i3ZFe17mze

timo meier just took a tripping and a slashing penalty in a five-second span. four minute powerplay for the oilers. pic.twitter.com/DQYuTdKDA9

timo meier just took a tripping and a slashing penalty in a five-second span. four minute powerplay for the oilers. pic.twitter.com/DQYuTdKDA9

Worth noting right off the top that both Darnell Nurse and Jay Woodcroft got questions about Evander Kane. Those game from the San Jose media, who asked similar questions of Kane and Woodcroft this morning.

“How awkward was it for Evander Kane to come back here to San Jose? Did you guys have his back?”
Nurse: “For sure we had his back. He’s part of our team now. Anytime you come back to a place you just played it can be awkward so to say. But yeah, we definitely have his back in the room. we’re always here for him.”
On the game: “Obviously there’s principles we want to have within our game, habits we have each and every night. Tonight, we had them. You got to continue to do that night after night and it was good to execute on the game plan.”
Advertisement
Ad
Advertisement
Ad
On Skinner: “He was unbelievable. Earned his first-ever shutout in the NHL which is a huge accomplishment. It’s something he’s worked hard for. There were some moments where they had clean looks and he came up huge. (He’s) a big reason we won that game.
“He’s an all-around great person. comes to the rink every day with a mindset to work. On top of that, he always has a smile on his face asking how you’re doing, asking about your kid, your fiance, everyone. He’s a guy who cares about the guys, then he comes out and plays the way he did, it’s fun to see.”
On getting a quick two-goal lead and not looking back: “For us, we haven’t played with a lead early in games lots this season, but when you find a way to get it and just stick to your game plan, I think it’s huge. As a team you just grow confidence as the game goes on because you’re not forcing anything and just sticking to what made you successful early on.”
Advertisement
Ad
Advertisement
Ad
On scoring his 50th NHL goal: “Yeah, I just found out right now. Jamie got the puck. So it’s a cool milestone to have. Hopefully, there’s a few more. It’s crazy I’ve been in this league for seven years now. It goes by in a flash.”

On Skinner’s play in the first few minutes of the game: “I thought Stuart stood tall when we needed him right off the bat. I think it’s a habit of this team in this building is they come out very, very hard. Stuart was ready and it’s a big feather in his cap to get his first NHL shutout.”
On Skinner’s growth: “I think he’s certainly physically matured and his game has matured, but just as a young man he’s matured. He’s married, just the way he carries himself off the ice. How he treats his body, his emphasis on recovery and mentally being able to handle a big workload down in the American Hockey League and find ways to win games at that level. To see him transitioning to beginning his NHL career, I’m proud of him because I do have that relationship going back four years with him.”
Advertisement
Ad
Advertisement
Ad
On what he was most pleased with in the Oilers win: “We felt we needed all 20 for a full 60 minutes. I thought we played a full 60 minutes. There were times where the other team had some chances, but we really, really liked the commitment to the defensive side of the puck, the commitment to working back to our side of the puck. It was impressive to see those players put in the work they put in. It’s not easy like that, but they did a good job for us tonight.”
On Kane’s return to San Jose: “I thought it was a very important game for Evander. We talked to him before the game and I thought he was a big factor in the game tonight. When I talked to Evander yesterday, he told me how much he just wanted to get the two points in the bank for the Edmonton Oilers and how that took precedent over everything else. I said it this morning I’m extremely impressed with him as an individual. I think he’s a good hockey player and he makes us a better team with him in the lineup.”
Advertisement
Ad
Advertisement
Ad
On Nurse hitting 50 goals, his importance to the team: “Darnell is money in the bank with being able to play big minutes on the back end against the best players in the world. He’s somebody who has really grown his game. I would use the term he burns with purpose. He comes to the rink every day with a purpose in mind to be the best he can be. He’s somebody who is serious about his craft and I really believe he’s only scratching the surface.”
On getting a win against a divisional opponent: “I think it was an important game for us. Every game is important as you’re coming down the stretch in the situation we’re in and how tight the division is. What we’ve really tried to emphasize over the last four days or so is take it one day at a time. To keep our picture small. To keep our focus on our daily process. We believe if you do that, results take care of themselves.”
Advertisement
Ad
Advertisement
Ad
Zach Laing is the Nation Network’s news director and senior columnist. He can be followed on Twitter at @zjlaing, or reached by email at [email protected]