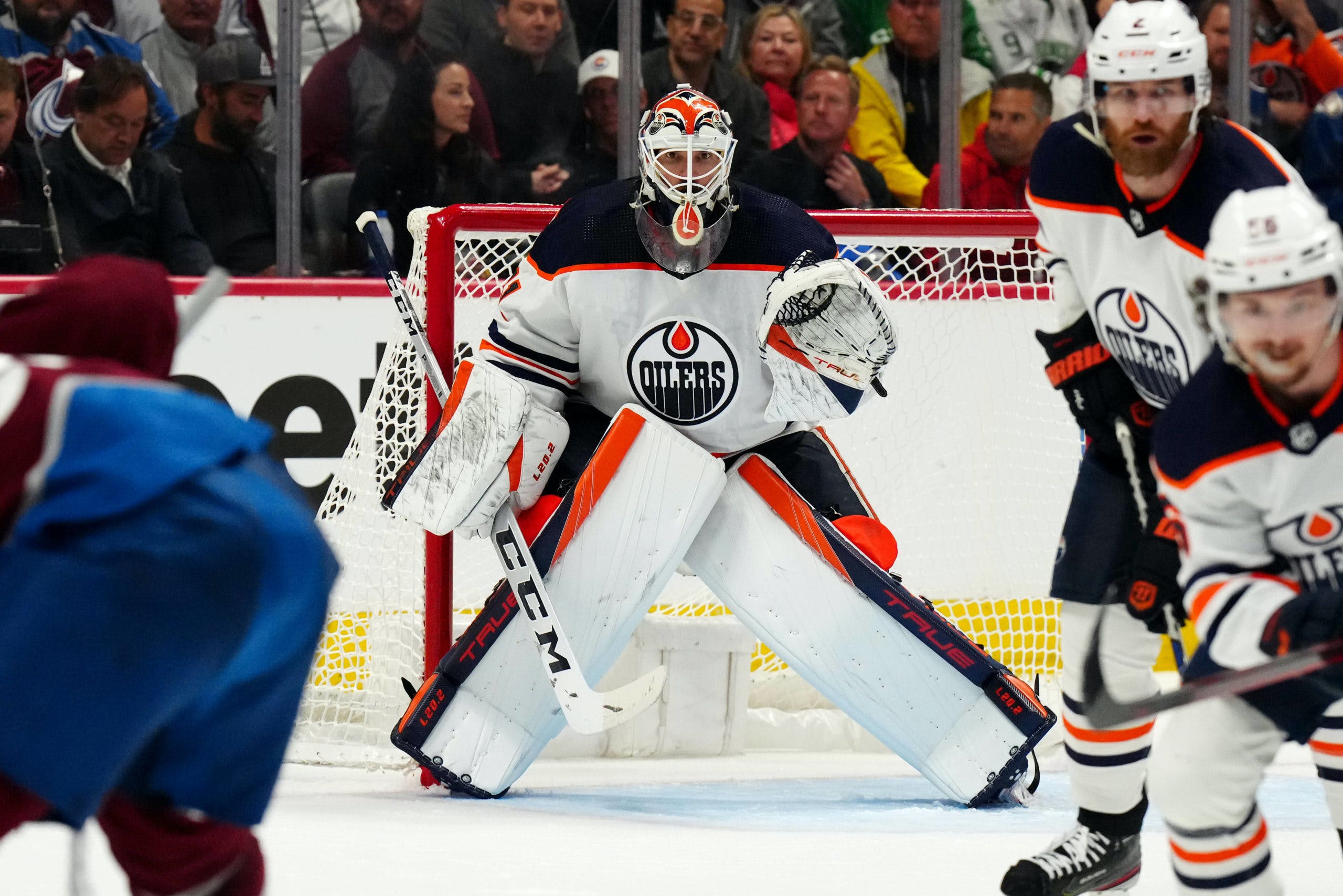 Photo credit: Ron Chenoy-USA TODAY Sports
By Zach Laing
7 months ago
Comments
Yes, that’s right. 8-6.
If there’s one thing these Edmonton Oilers love it’s playing in high scoring game ones. Now, will we see them turn it around and come back to win like they did against LA and Calgary?
Time will tell…

and then alex newhook gets one back for colorado 36 seconds later. pic.twitter.com/FJBjodmcp9

*This was JT Compher, not Alex Newhook.

blink and you miss him! nathan mackinnon arrives in the western conference finals blowing by darnell nurse before giving the avs a 2-1 lead. pic.twitter.com/knl2CdVKZE

zach hyman bangs away at a loose puck, but can't get it past kuemper. pic.twitter.com/t9UWiVxz3d

but the avs get it back again with another quick one! cale makar rips one home to make it 3-2. pic.twitter.com/dopCCZXyLZ

clouder! ryan mcleod drives to the net and bangs home a rebound to make it a 4-3 game. pic.twitter.com/7PH9NgSHhs

this game is drunk. it's jt compher with his second of the game and colorado extends their lead to 6-3. pic.twitter.com/cd2q0sPCiX

oilers sitting in the locker room after the first two periods against colorado pic.twitter.com/1OrMs4lP7O

the oilers are fighting back! ryan nugent-hopkins makes it a 7-6 game! pic.twitter.com/I1cv1vLRBI

On the first period: “Can’t get scored on three times, doesn’t matter what game it is. You’re obviously chasing it from there on. We’ll be better.”
On the Oilers being in these high-scoring games, if it’s a product of chasing games: “We obviously have to change something. We can’t be giving up that many goals and expect to win a western conference finals game. That’s the second time this has happened. We have to make sure we’re ready to go right off the bat and we’ll be better.”
Advertisement
Ad
Advertisement
Ad
On keeping up with Colorado’s speed: “I think it’s both. We know we can skate with them, we’re one of the fastest teams in the league. When we play to our strength and play to our quickness, then we’re a really hard team to handle. You saw spurts of it in the third period, but it’s obviously not good if you’re down 6-3 or whatever it is. You’re just chasing the game from thereon. We just got to come out a little sharper, little harder.”
On if the Oilers can take anything away from it still being a one-goal game: “I mean, it’s a positive that there’s no quit in our game. At this time of the year, we know that already. We’ve shown it again tonight, but we don’t want to be in these situations. That’s not how you win hockey games this time of year. Like I said, regroup, adjust a couple things and we’ll be better.”
Advertisement
Ad
Advertisement
Ad

On the Oilers coming back, staying in it: “We stuck with it, but we give up seven with an empty netter eight. It’s tough to win in this league this time of year if you’re giving up that many goals.”
On the Makar goal that went to review and was allowed: “It ended up being a goal. That’s all that matters.”
On how the Oilers can slow down Colorado’s speedy attack: “We just have to be over top of them, match their speed, and myself personally, I didn’t do that well enough. As a team, we can do that a lot better just being aware of the speed, where it’s coming from and reading the play. They’re a good team, they’re going to create a lot of offence. They have some special players. Like Leon said, we’re going to be better and that’s on us to be ready for the next
Advertisement
Ad
Advertisement
Ad
On Koskinen: “Yeah, he worked his tail off, made some huge saves to keep us in it there late in the second and throughout the third. We have two really good goaltenders we believe in and he came in and had a really good performance for us and gave us a chance to be there in the end of the third.”

On the game: “Similar start to our last series. Ultimately, just weren’t good enough from the start. Game gets away from us and obviously, we battle back and make it a hockey game, but it’s not good enough from the start.”
On Colorado’s speed, strong start: “They’re quick, they’re a real good team. We expected that. They had a good start, we didn’t have a good start. We got the first goal, but were a little on our heels right from the get-go. Real similar to our last series.”
Advertisement
Ad
Advertisement
Ad
On the Oilers being in these high-scoring games, if it’s a product of chasing games: “It’s a bit of both there. We’re down 7-3 and we got to open it up, we got to take some chances. It gives it that run and gun feel, but that’s obviously not the game we want to play. Just not good enough all over, but a lot of stuff we can clean up. A lot of stuff that was self-inflicted. Like I said, they’re a real good team. You give them chances, they’re going to bear down and score. We got to defend. At the same time, we found a way to get six. It was real similar to game one last series.”

On the Makar goal that was reviewed: “Honestly, I had no idea it was even close to be honest. I didn’t really get a good look at it. Not sure.”
Advertisement
Ad
Advertisement
Ad
On his game, getting pulled: “When you’re on the bench halfway through the game, it’s not a good sign. Saying that, it’s one game and we’ve been in this position before. You park it and move on. It’s a long series.”
Smith was asked to offer perspective on what he saw from the Oilers: “Obviously, we don’t like game ones. We’re a resilient group that doesn’t just roll over and die. That’s an encouraging part. When you’re giving up touchdowns in the last two series’ game ones, I think it’s not a good sign. I think it shows a lot about our team that when we’re down, we’re not out of the fight and we’ll continue to battle right to the very end and play for each other. That’s a good sign, but lots to clean up.”
Advertisement
Ad
Advertisement
Ad

On the game: “To a man, we weren’t good enough defensively. You score six goals in a game you should win the game. For us, we know we can be better and we will be as we move forward here.”
On how the Oilers handled colorado’s speed: “All of the games we played against them have been basically pretty close games. The other games in the regular season were a lot tighter defensively on both sides. We scored six goals on their goaltending tandem tonight in their building. That should be enough to win the game. For me, there’s things we have to do in terms of preventing. Sometimes I think it’s not about what you get, it’s about what you’re giving up. And tonight, we gave up far too much.”
Advertisement
Ad
Advertisement
Ad
On if he was satisfied with the explanation on the Makar goal review: “I didn’t really get an explanation. We looked at it, we felt the player had control of the puck, didn’t know that there was an offside player. We thought it was the right move to challenge that call. It didn’t go our way. Stuff happens, you got to live with it and move on. We made the decision to go with it and we still feel that player had control of the puck. As I said, things happen in hockey games. You got to move on. We didn’t get the kill, and that was disappointing for us. We found a way to chip away and get back in the game. I’m going to keep going back to it: we didn’t win or lose the game because of that call. We gave up too many goals against. We got some work to do to clean it up.”
Advertisement
Ad
Advertisement
Ad
On if he had ever seen something like that goal, the player establishing control: “I think control is a discretionary kind of thought process. It’s not as if the player knew someone was tagging up, lifted his stick up, waited for it, and then went back. He’s in full control… And anyone that’s carrying a puck over a blue line — whether your stick is on the puck or not, that’s debatable. In the end as I said, those things happen in hockey. You got to get over it. We talked about that. Ultimately, we didn’t get the kill. That’s not why we won or lost the game. We gave up way too much and we got some things we got to clean up.”
Advertisement
Ad
Advertisement
Ad
On his biggest takeaway: the start, or the fight back in the game: “I don’t know about the start, we scored the first goal. We were doing some things we were okay with. We didn’t like what we gave up. We score a goal, we give up a goal on the next shift. They go up, we find a way to claw back in the last minute of the period, we give up a goal immediately after off a faceoff win. Those are all things within our control. We can sharpen up, and we’re gonna have to as we move forward because that’s a dangerous hockey team over there. We understand that. Bottom line is, to a man, we can all be better.”
On Edmonton being 5-0 challenging, if losing the one tonight will have them reassess how they go about challenges: “No, not at all. We have complete faith in our process. We believe we’re making the right call. In the end, it didn’t go our way. As I said, you have to be able to weather that stuff.”
Advertisement
Ad
Advertisement
Ad
On the Oilers beating LA, Calgary after losing game one in both series: “I think Colorado is a different animal. We have that experience. The bottom line is we’re going to have to elevate our game a little bit and it’s on the defensive side of things but we’re a confident group. That game right there, that’s finished. We’ll go over it, we’re going to digest it, we’re going to give our players something to hang their hats on. In the end, our thoughts and our concentration is onto game number two now.”
On if the Oilers were maybe caught star watching after all the talk of the elite talents: “Not as much as they might’ve been watching our stars. I think the games in the regular season were tight-checking, defensive battles, but it was excellent hockey. I thought today defensively we were sloppy, but again, I’m going to go back to the six goals we scored on that team. I don’t know if they can be happy with that. That’s up to them to figure that out. For us, we just know we have a lot better. To a man, we can compete a lot harder defensively and if we do, we feel good about our chances.”
Advertisement
Ad
Advertisement
Ad
Zach Laing is the Nation Network’s news director and senior columnist. He can be followed on Twitter at @zjlaing, or reached by email at [email protected]