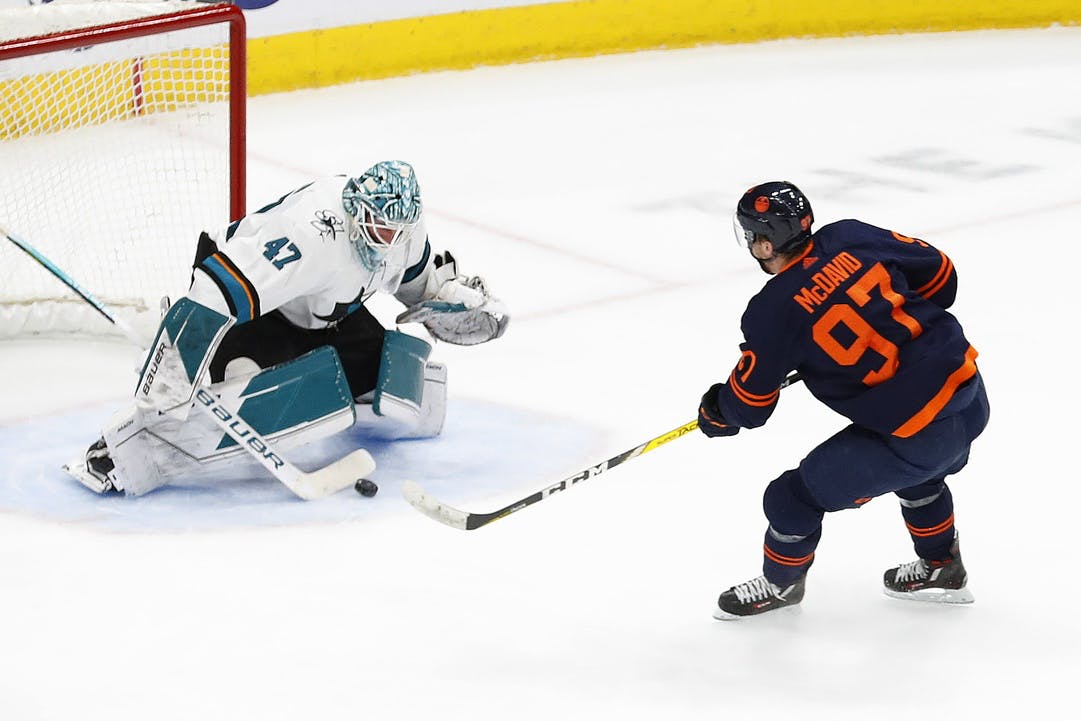 Photo credit: Perry Nelson-USA TODAY Sports
By Jason Gregor
13 days ago
Comments
Beating teams you should beat does not always happen in the NHL, otherwise the worst teams in the league would finish with fewer than 10 wins every year. However, recently the gap between the best and worst teams seems to be growing and winning those games “you should” becomes more likely.
— In 2018 four teams had fewer than 30 wins and Buffalo had the fewest at 25.
In 2019 only one team, Ottawa (29) had fewer than 30 wins.
In the COVID-shortened 2020 season only Detroit (17) and Ottawa (25) were trending to be under 30 wins.
But in 2021 there were five teams: Detroit (15), Anaheim (17), Columbus (18), New Jersey and Detroit (19) who were all on pace for 28 wins or fewer.
Last season six teams had fewer than 30 wins: Chicago (28), Seattle and New Jersey (27), Arizona and Philadelphia (25) and Montreal (22).
The past few seasons the bad teams are winning fewer games.
— The 2010 and 2011 Oilers were the only team, each year, to have fewer than 30 wins. In 2014-15 when the Oilers won the Connor McDavid draft lottery, they and Arizona won 24 games, while Buffalo won 23. The trend was usually 1-3 teams under 30 wins, but past few seasons the NHL has had five and six teams under 30 wins. And five teams are tracking to be there this season.
Advertisement
Ad
Advertisement
Ad
— Arizona, San Jose, Columbus, Anaheim and Chicago are all on pace to win fewer than 27 games. The bottom teams are winning less frequently, and the Oilers need to continue that trend tonight against a Sharks team that is terrible defensively at 5×5.
— San Jose has allowed the second-most 5×5 goals in the league at 112. Only Anaheim (119) is worse, and the Oilers scored five times against them on Wednesday. The key difference is the Sharks are very good scoring goals 5×5. They are third in the NHL with 97. The Ducks are 30th with 62.
— The Oilers have only allowed 12 goals at 5×5 since Christmas. That is tied for third fewest in the NHL. They’ve shown signs of improving their defensive play 5×5. That must continue.
Advertisement
Ad
Advertisement
Ad
— Erik Karlsson leads the NHL with 37 points at 5×5. He’s been unreal for San Jose in producing offence with 37 points 5×5. McDavid is tied for fifth with 29. The Sharks can bite you, pun intended, if you play run-and-gun with them. They give up a lot, but they can also score. The Oilers need another strong start like they had in Anaheim, and to continue to push, without getting lackadaisical defensively.
— The Oilers completely controlled Wednesday’s game from start to finish. When the Ducks made it 2-1, McDavid regained the two-goal lead 91 seconds later. The Oilers didn’t sit back. They didn’t give the Ducks any hope. They are the better team and they showed it. They need to play with the same determination, discipline and effectiveness tonight. Edmonton is better than San Jose, but they have to show it. No one wins games on paper. They have to win it on the ice.
Advertisement
Ad
Advertisement
Ad
— The Oilers have a very favourable schedule for the next month. The just beat the Ducks. They face the Sharks tonight. They play Vancouver, Columbus, Chicago, Detroit, Philadelphia, Ottawa, Montreal and Detroit before February 15th. The only playoff teams they face are Vegas, Seattle and Tampa Bay. Vegas is the toughest game, because it is the second half of a back-to-back and their third game in four nights. But next week they face Seattle after having two days off, and the Kraken will be playing their ninth game in nine different cities and on the second half of a back-to-back — essentially the final stop-of a nine-game road trip. Tampa plays in Vancouver the night before they face the Oilers. Edmonton has a schedule advantage v. Seattle and Tampa Bay and they have 10 games against non-playoff teams.
Advertisement
Ad
Advertisement
Ad
— Tonight represents another game they should win. I view it in the same vein I did Anaheim two days ago. This is a must-win game against a bottom-tier team as the Oilers are in a dog fight for a Wildcard spot. They played a very professional game on Wednesday and need the same approach tonight if they want to give McDavid a win on his 26th birthday.
— McDavid is 1-1 in games on his birthday. He celebrated his 21st birthday in Vegas with a 3-2 win, while his 24th b-day wasn’t as fun as the Oilers lost their season opener in 2021 5-3 to Vancouver.
— McDavid has amassed the fifth-most points in NHL by a player 25 years or younger.
Player                           Points
Advertisement
Ad
Advertisement
Ad
Pretty impressive company. He is also tied with Gretzky for the most game-winning goals (it should be game-deciding goals, but I digress) by a player 25 years of age or younger with 58. Jaromir Jagr (55), Alex Ovechkin (52) and Glenn Anderson (49) round out the top five.
— The Oilers won all four meetings v. the Sharks last season. That is the tied for the second-longest winning streak v. the Sharks in franchise history. The Oilers won six straight between 1991-92 and 1992-93. Edmonton is 58-53-12(T)-8 (OTL) all-time v. the Sharks.
— San Jose is the worst home team in the NHL. They’ve won four of 21 home games (4-11-6) and have been outscored 84-62. The Oilers are 12-7-1 on the road and have the ninth-most road wins.
— After struggling to score first early in the season, the Oilers have started much better since December 1st. They have scored first in 12 of their 20 games, but the problem is they are only 5-5-2 in those games. That is the second-worst winning% when scoring first in the NHL since December 1st. They led start to finish on Wednesday and need to build on that tonight.
Advertisement
Ad
Advertisement
Ad
—  Edmonton has outscored teams 28-13 in the first period in previous 20 games. They have the most first period goals in that span and only Carolina, LA, Vegas and Tampa are allowing fewer first period goals. To start that well, but only go 9-8-3 is disappointing. The Oilers have vastly improved being prepared to play. Now they need to maintain that level of focus throughout the game.