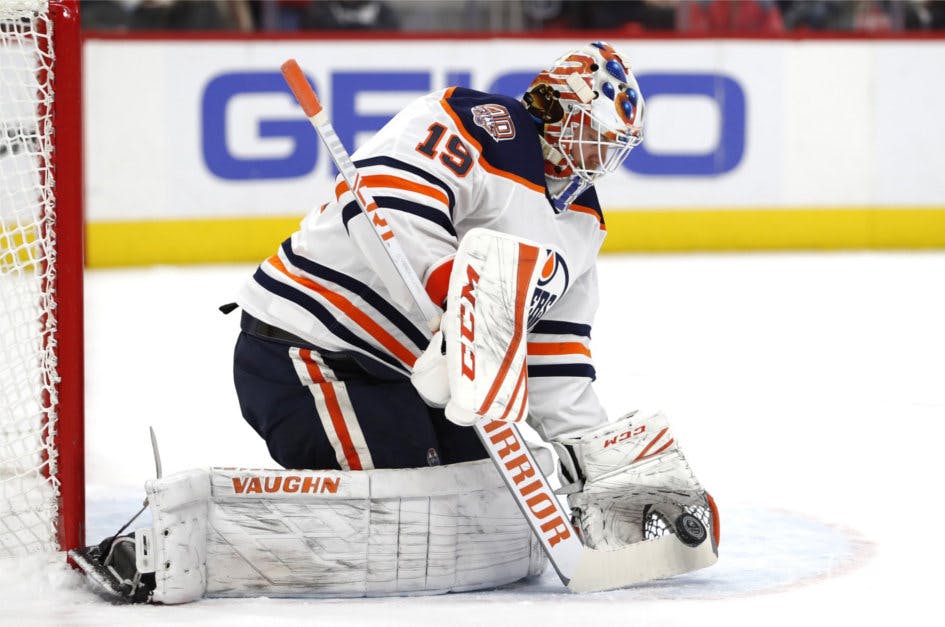 Draisaitl-McDavid-Kassian
Gambardella-RNH-Chiasson
Rieder-Cave-Gagner
Lucic-Brodziak-Currie
Klefbom-Larsson
Nurse-Russell
Sekera-Benning
Koskinen
Joe Gambardella has a modest two-game point streak, but he has looked more comfortable lately and Ken Hitchcock decided to give him a look in the top-six. He explained the improvements he has seen in Gambardella’s game over the past few weeks. “Quickness of thought. It takes time to adjust and to adapt to the speed of the NHL and the last few games he and Currie are processing the game better and we will give him a chance up the lineup,” said Hitchcock.
According to our friends at OddsShark, Los Angeles is 1-7 SU in its last eight games on the road

Iafallo-Kopitar-Brown|
Grundstrom-Kempe-Toffoli
Clifford-Carter-Lewis
Wagner-Brodzinski-MacDermid
Forbort-Doughty
Martinez-Roy
Walker-Phaneuf
Quick
Ilya Kovalchuk is back in LA skating with their skills coach. He and head coach Willie Desjardins are not on the same page. The Kings are in a tough spot with him. If he retires, his contract still counts against the cap because he signed it when he was 35. Maybe he gets a mysterious injury, and he goes on IR for two years, or maybe a new coach will connect with him better. Either way his signing has not worked out well for him or the Kings.
Advertisement
Ad
Advertisement
Ad

Willie Desjardins, on defending well and the overall performance:
Well, I thought they got lots of chances. I thought we played well the first half of the first period. They didn’t have a lot. They didn’t have a lot. They got some power plays, and then they generated some stuff off their plays. Overall, I thought our guys played smart. They’re a good team, a real good team, and I think we were on our heels a little bit but we didn’t break.
Desjardins, on whether quotes like Drew Doughty’s today tangibly ramp up emotion and intensity:
I think there’s always dislike between players, like every game you have it. It’s not just that game, it’s every game you get that. So that wasn’t unusual. You can see that in every game, there are certain things. But yeah, it does bring a little bit more emotion to it, and it was probably good for both sides.

Photoshop: Tom Kostiuk
GAME DAY PREDICTION: Some Kings fans, and their amateur scouts might be yelling right now. After winning two of 18 games between February 9th and March 18th, the Kings have suddenly won three games in a row and now Ottawa trails them by six points. The Kings are why I believe you can never completely tank, because players will always try to win. Oilers end Kings modest winning streak with a 3-2 victory.
OBVIOUS GAME DAY PREDICTION: Draisaitl picks up his 96th point and inches closer to 100. When he does the Oilers will become the 64th team to have a pair of players with 100+ points. Sixty-one of those teams made the playoffs. Only the 1988 Quebec Nordiques (Peter Stastny/Michel Goulet) and the 1990 Pittsburgh Penguins (Mario Lemieux/Paul Coffey) missed. The Oilers could become the third to miss the postseason.
Advertisement
Ad
Advertisement
Ad
NOT-SO-OBVIOUS GAME DAY PREDICTION: The broadcast microphones pick up a conversation between Doughty and McDavid.
McDavid: “Your comments about Tkachuk made me laugh. You know how to stir it up.”
Doughty: “I can’t stand that kid. Good player though.”
McDavid: “Didn’t you stick guys early in your career?”
Doughty: “Yes, but never in a cheap way (laughs). Now shut up and get back to the game. It doesn’t look good us being friendly. Get ready for a stick next shift.”
McDavid: “Try catching me first. You defend like Burns (laughs).
Doughty: “You can chirp when you make the playoffs two years in a row.”
McDavid: “You are the verbal equivalent of Tkachuk. Cheap.”