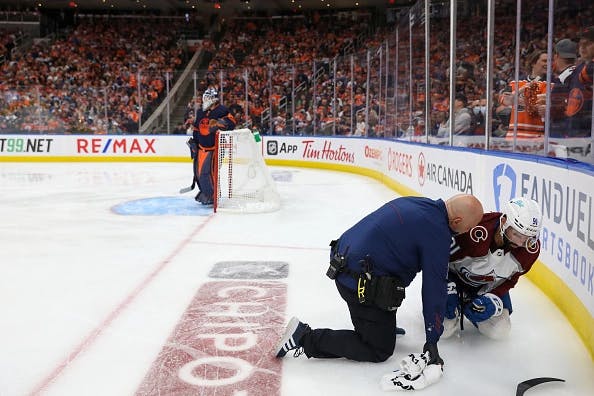 Photo credit: Getty Images
By Zach Laing
7 months ago
Comments
Evander Kane isn’t going to be in the Edmonton Oilers lineup for game four.
The league has come down on him with a one-game suspension for his hit on Nazem Kadri in game three. Minutes into the game, Kane caught Kadri with a stick in the back feet away from the boards sending the latter careening hard into the corner.

Kadri stayed down on the ice for some time, missed the remainder of the game and is believed to have suffered an injury serious enough that will keep him out of the Western Conference Finals, at least.
With Kane being suspended for the hit, it’s just another example of what is wildly inconsistent disciplinary actions from the NHL’s department of player safety.
Let’s take a look at some of the thing they’ve handed out discipline for in these playoffs alone.
Look back to Minnesota Wild defenceman Jared Spurgeon’s cross-check to the ankles of St. Louis Blues forward Pavel Buchnevich. There’s clear intent to injure on the play with the former coming down hard on the back of the latter’s ankles with a vicious blow. A $5,000 fine was levied, the maximum allowable under the CBA.
Advertisement
Ad
Advertisement
Ad

look at this TRASH pic.twitter.com/LB6qjXlMBi

Fast forward a week later, and Calgary Flames defenceman Nikita Zadorov delivers a high, hard hit to the head of Dallas Stars forward Luke Glendening. A hearing was called, but the league said “Zadorov took a proper angle of approach, did not extend outward or upward, and hit through Glendening’s core.” No discipline, no fine.

A day later, Carolina Hurricanes defenceman Brendan Smith lands a jumping elbow on David Pastrnak’s head. He comes into the boards hard, leaves hit feet and lands a clear elbow to the head of Pastrnak. A $2,000 fine, the maximum allowable under the CBA. These are just from the 2022 playoffs.
Want a few more? Here’s Tampa Bay Lightning forward Brandon Hagel boarding Florida’s Eetu Luostarinen. $3,750 fine.

Hagel gets a major penalty, but after review it's reduced to a minor for crosschecking Luostarinen pic.twitter.com/mK00ubQQmX

And here’s a side-by-side of Pittsburgh Penguins forward Sidney Crosby delivering the same hit Kane did on Kadri to the back of New York Rangers defenceman Ryan Lindgren. No discipline on this one.
Advertisement
Ad
Advertisement
Ad

Jump ahead to game three between the Colorado Avalanche. Kailer Yamamoto is streaking through the neutral zone and receives a pass just short of the Avs’ blue line. Immediately, Gabriel Landeskog takes a path right to Yamamoto as the latter tries to corral a bouncing puck. Landeskog lays a hit with the point of contact being his shoulder directly to the head of Yamamoto.
Size difference or not, it’s on Landeskog to take the initiative to lay a clean hit, not one directly to the head of Yamamoto. There was no penalty on the play, and not a wink from the league’s player safety department.
While Yamamoto continued playing through the second period, but eventually left the game due to what was called an upper-body injury.

Come game four, the Kane hit happens on Kadri minutes into the game. Kane sits for five, Kadri is out. Now, Kane is set to miss game four.
Advertisement
Ad
Advertisement
Ad
As the game went on, more questionable calls were missed, namely Nathan MacKinnon’s slew foot on Leon Draisaitl. The pair battle for a puck bouncing off the boards in front of the Oilers bench. MacKinnon places his left leg behind Draisaitl’s right leg continuing with his stride. His upper body entangles with Draisaitl’s pushing the latter backwards.
Draisaitl hits the ice hard, and hobbled down the tunnel to the Oilers locker room, but returned a short time later. There’s no supplemental discipline expected to come for either MacKinnon, or Landeskog.

nathan mackinnon takes out leon draisaitl in front of the benches. the latter hobbled to the room, as seen in this clip, but was quick to return. pic.twitter.com/Tpe7JS2Ovc

My issue isn’t so much with Evander Kane being suspended. It’s a dirty play that frankly doesn’t have a place in the game. But neither does a cross-check to the back of the ankles, a blatant hit to the head, a jumping elbow, a blindside hit to the head, nor does a slew foot.
Advertisement
Ad
Advertisement
Ad
And let’s not even talk about Crosby getting away with the same hit, nor Hagel only being fined.
The issue is that there seems to be more subjectivity rather than objectivity from the NHL department of player safety, let alone the referees that take the ice every night. That’s why it’s time for the league to take a deep dive into its refereeing and the way the player safety department operates.
If the league truly wants to create safety for all of its players, it’s time for a revamp of the entire process front-to-back.
Zach Laing is the Nation Network’s news director and senior columnist. He can be followed on Twitter at @zjlaing, or reached by email at [email protected]