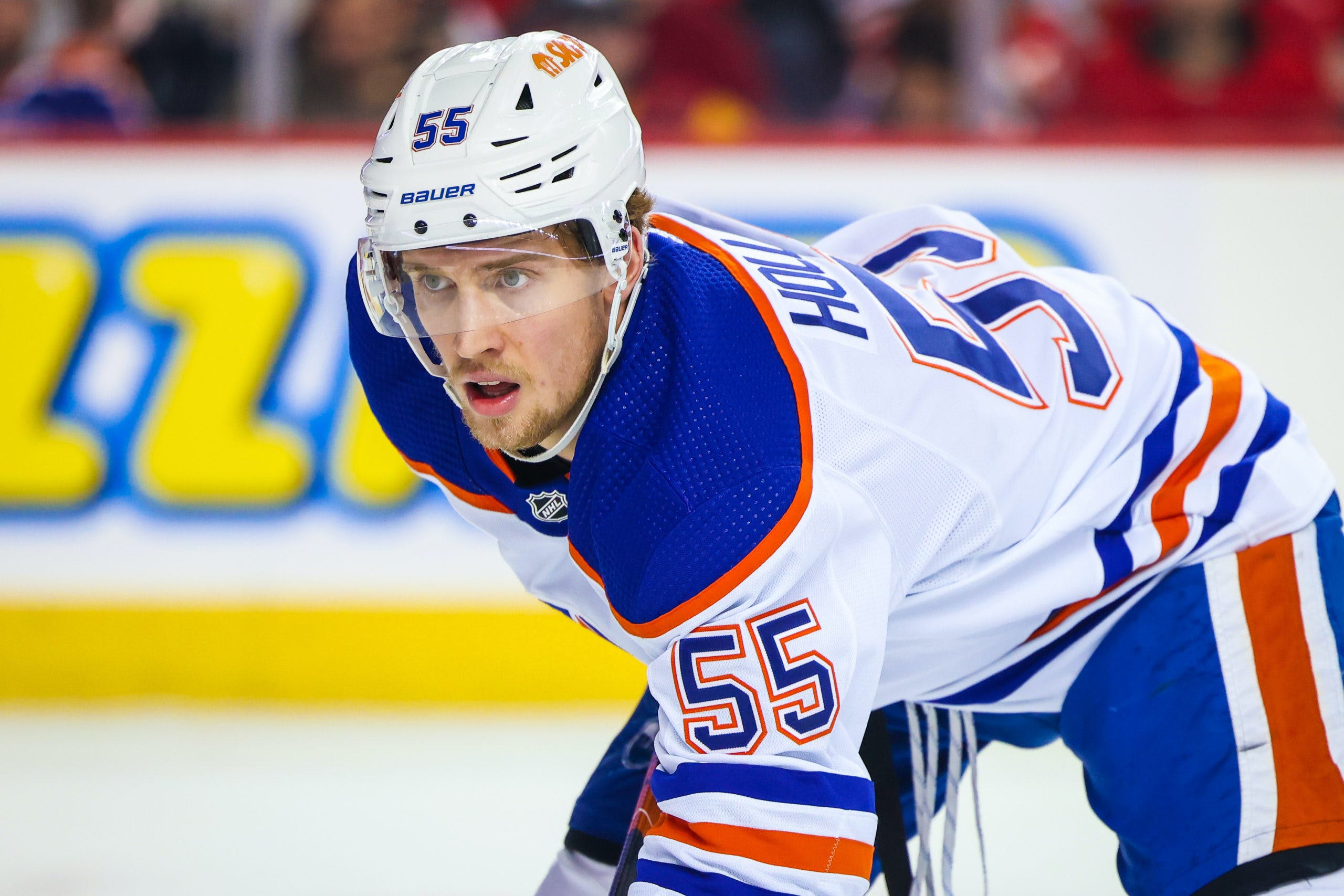 Photo credit: Sergei Belski-USA TODAY Sports
By Brennan Delaney
12 days ago
Comments
The NHL trade deadline is quickly approaching, so the rumour mill is churning.
We’ll look to answer which prospects may be moved at the deadline (and which are untouchable) and a defenceman the Oilers could be targeting…

Per Daniel Nugent-Bowman of The Athletic, the Oilers’ brass considers forward Dylan Holloway and defenceman Philip Broberg “off the table” in trade discussions…

Daniel Nugent-Bowman writes that Philip Broberg and Dylan Holloway are both pretty much considered untouchable. He notes that there are some people in the organization who thinks Broberg could be as good as Jakob Chychrun by the end of the season.

In fairness, it’s not hard to see why. Broberg’s play in recent weeks has ticked in the right direction once he was paired with a fellow young defenceman, Evan Bouchard. The two have played 216:33 minutes on the ice together, and have a goal share of 56.5%, and an even better-expected goal share of 61.1%, according to Natural Stat Trick.
Holloway has been up and down the lineup in his 44 games played with the Oilers, but he’s chipped in with three goals and nine points. As of now, he looks to be a good middle-six player, but the 21-year-old still has a ton of room to get better, while barely impacting the Oilers’ cap situation.
Advertisement
Ad
Advertisement
Ad
That leaves Reid Schaefer and Xavier Bourgault as the only two top-tier prospects they may be willing to part with.

The Oilers have checked on Gavrikov:

Per the same report, Nugent-Bowman notes that Columbus Blue Jackets’ defender Vladislav Gavrikov. The same sentiment was shared by Elliot Friedman and Jeff Marek’s 32 Thoughts podcast, where Friedman noted that both Edmonton and Toronto are two teams looking into Gavrikov. Friedman also said that Columbus is allowing other teams to discuss a contract with the pending unrestricted free agent.

Elliotte Friedman on 32 Thoughts segment: “I think EDM & TOR are among the teams who have looked into Gavrikov.”

Friedman also says CBJ is allowing teams to talk to Gavrikov for a potential contract extension.

The 27-year-old is a pending UFA.#LeafsForever

The 27-year-old left-shot defenceman has three goals and 10 points for the season, with below-average advanced statistics. However, it’s worth noting that the Blue Jackets absolutely suck, and if he were an Oiler, he’d likely be a second-pair defenceman. That means he wouldn’t face as difficult competition as he did on Columbus’ first pairing.
Advertisement
Ad
Advertisement
Ad

The asking prices are too darn high!

According to the 32 Thoughts podcast, the Blue Jackets want a first-round pick in return for Gavrikov. As you may know, the Oilers need to be in win-now mode with McDavid’s eight-year contract already half over.
The first doesn’t necessarily need to be moved for Gavirkov, especially if there is no extension in place (the Florida Panthers learned that the hard way with Ben Chariot last deadline), but Ken Holland can’t continue to not trade that pick. It’s time for the Oilers to trade the pick (along with prospects) for an impact player who has some years remaining on his contract.

It’s also worth noting that the Chicago Blackhawks could be open to trading both Jonathan Toews and Patrick Kane, the latter being a free agent at the end of the season. Furthermore, the asking price for the Vancouver Canucks’ Bo Horvat is three players, including a top prospect. Although the Oilers don’t necessarily need another centre, Horvat is on pace for 55 goals. If there’s an opportunity to trade for him, the Oilers need to be all over that.
Advertisement
Ad
Advertisement
Ad