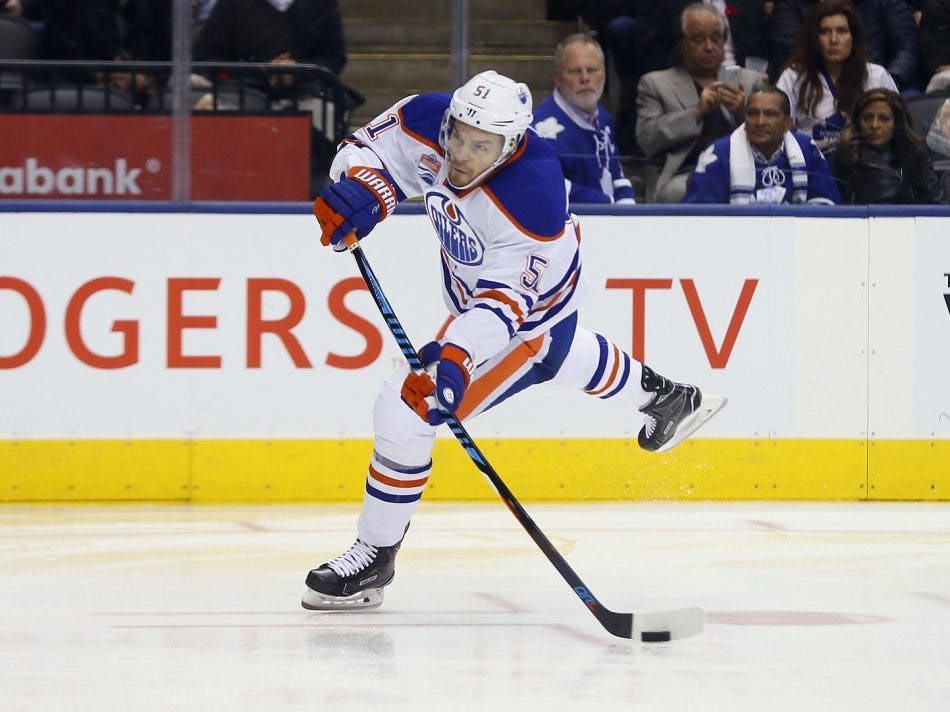 By Zach Laing
1 year ago
A total of 13 former Edmonton Oilers players will be representing their countries at the Olympic Games.
Let’s take a look at each player, when they were with the Oilers, and what they’ve been up to since.

Adam Cracknell and David Desharnais will be heading to the Olympic’s on the Canadian roster.
Cracknell, 36, is currently playing for the Oilers AHL affiliate Bakersfield Condors. During the 2015-16 season, he had an eight-game stint with the Oilers in which he scored no points.
After bouncing around some NHL and AHL teams, he signed with the Bakersfield Condors ahead of the 2020-21 season. Since then, he’s been looked to as a major leader for the young Condors. In 67 games with the club, he’s scored 20 goals and 53 points.
Desharnais, meanwhile, spent part of the 2016-17 season with the Oilers. He was acquired at the trade deadline and appeared in 18 regular season games scoring two goals and as many assists.
In the playoffs, he appeared in 13 games scoring one goal and four points. His lone goal was a big one as a game-five overtime winner in the first round against the San Jose Sharks.
Now 35, he has spent the last three seasons with HC Fribourg-Gottéron in the Swiss National A League. There, he’s played in134 games scoring 41 goals and 112 points.

Two ex-Oilers will be representing Germany in Dominik Kahun and Tobias Rieder.
The former joined the Oilers as a free agent ahead of the 2020-21 season and played in 48 games. The 26-year-old scored nine goals and 15 points.
Kahun’s contract was never renewed, and this year he has been playing for SC Bern in the Swiss National A League. In 34 games this year he’s scored 12 goals and 38 points.
Rieder, meanwhile, was drafted by the Oilers in the fourth round of the 2011 draft. The team never signed him and subsequently traded him to the Arizona Coyotes in 2013 in exchange for Kale Kessy.
He bounced between teams before signing with the Oilers in 2018-19. While he scored no goals, he put up 11 assists in 67 games.
He played stints in Calgary and Buffalo, and this year has played for the Växjö Lakers HC in the SHL scoring eight goals and 15 points in 23 games.

It’s Gaetan hot in here!
Haas will be representing the Swiss team at the Olympics. The 29-year-old spent the 2019-20 and 2020-21 seasons with the Oilers appearing in 92 games scoring seven goals and 13 points.
This year, he signed with EHC Biel-Bienne in the Swiss National A League where he has scored five goals and 20 points in 32 games.

Representing the Czech team will be Tomas Jurco and Martin Marincin.
Jurco had signed with the Oilers ahead of the 2019-20 season playing in 12 games in Edmonton scoring two points. He had been assigned to the Bakersfield Condors, but played in only eight games before undergoing hip surgery.
He spent last year with the Vegas Golden Knights organization, and this year has appeared in 17 games with Barys Nur-Sultan in the KHL scoring 11 points.
Marincin, 29, was drafted by the Oilers in the second round of the 2010 draft and played two seasons and played in 85 games. The Oilers traded him to the Toronto Maple Leafs for Brad Ross and a fourth-round pick.
He became a cult fan favourite in Toronto and this year, has played for HC Ocelari Trinec in the Czechia league. He’s appeared in 34 games this year scoring four goals and 13 points.

The lone ex-Oilers Dane representing their county will be 29-year-old Patrick Russell.
Signed as a free agent out of the NCAA in 2016, he spent three years playing for the Bakersfield Condors before joining Edmonton full-time in 2019-20 and 2020-21. He appeared in just 59 games with the Oilers scoring seven points.
This year he’s played for Linköping HC in the SHL scoring 11 goals and 18 points in 29 games.

Three Finns who spent time in Edmonton will be representing Finland in Markus Granlund, Iiro Pakarinen and Teemu Hartikainen.
Granlund, 28, joined the Oilers organization in 2019-20 — his lone year with the team. He appeared in 34 games in Edmonton scoring three goals and four points, and 20 games with the Condors scoring six goals and 15 points.
He’s spent the last two years with Salavat Yulaev Ufa in the KHL scoring 31 goals and 91 points in 91 games.
Pakarinen, 30, was drafted by the Florida Panthers in the 7th round of the 2011 draft but never played for the team. He signed as a free agent with the Oilers in 2014 and spent four years in the organization.
In Edmonton, he played in 134 games scoring 10 goals and 23 points. In 66 AHL games, he scored 27 goals and 45 points.
Lastly, Hartikainen, now 31, was drafted by Edmonton in the 6th round of the 2008 draft. He joined the organization in 2010 and spent three years with the Oilers. He played in 52 NHL games scoring six goals and 13 points. In the AHL, he appeared in 152 games scoring 45 goals and 111 points.

Lastly, Anton Slepyshev, 27, will be representing Russia.
He was drafted in the third round of the 2013 draft and joined the club two years later. He split time between the Edmonton Oilers and Bakersfield Condors over the course of three years.
In the NHL, he scored 10 goals and 23 points in 102 games. He played in 12 playoff games in Edmonton during the 2016-17 season, he scored three goals.
In the AHL, he scored 16 goals and 31 points in 59 games.
Zach Laing is the Nation Network’s news director and senior columnist. He can be followed on Twitter at @zjlaing, or reached by email at zach@oilersnation.com.
Nation Takes
News
Oilers Talk
Recent articles from Zach Laing