A Deep Dive into Edmonton’s Bottom-Six 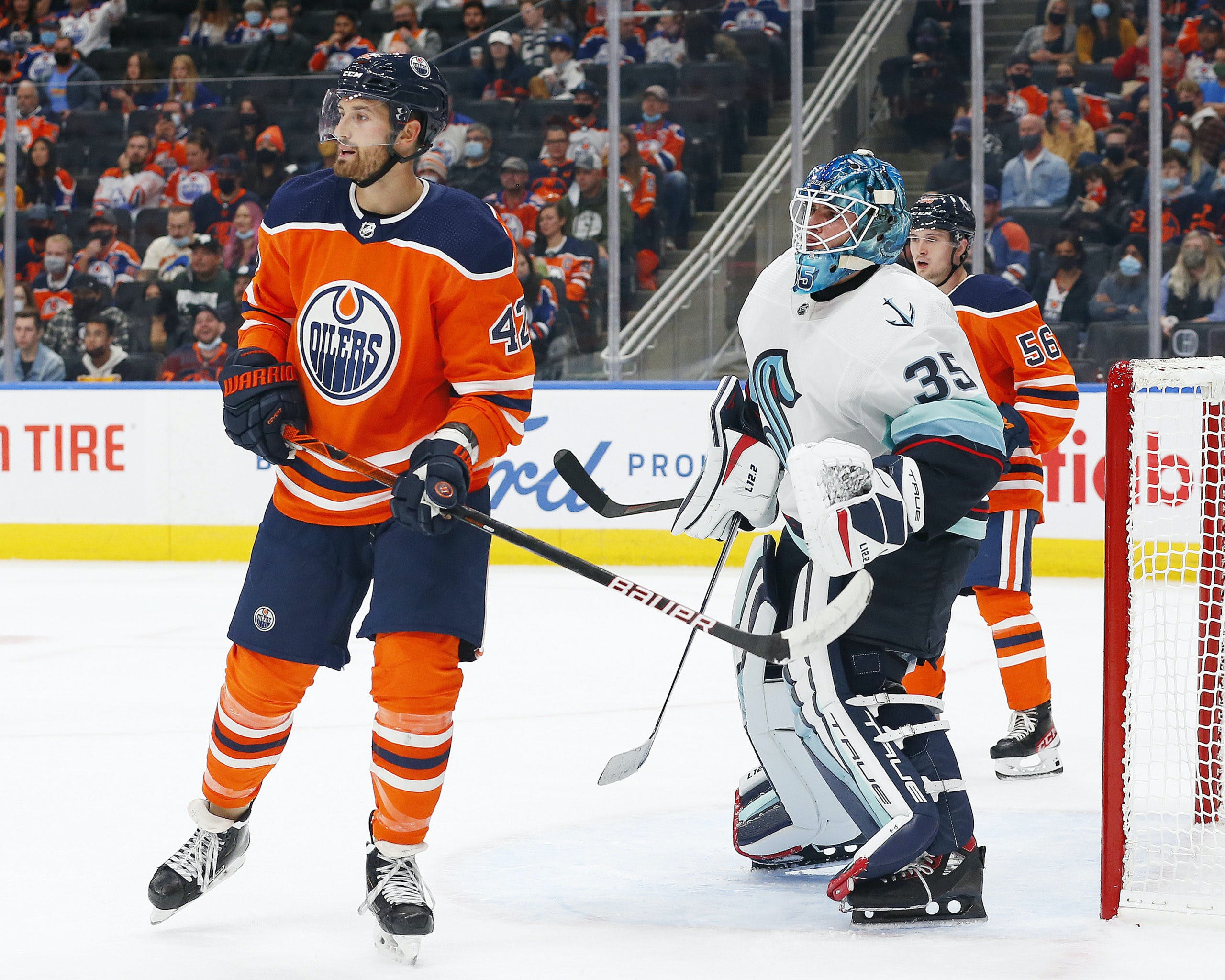 By NHL_Sid
1 year ago
With less than two weeks left until the season-opener against Vancouver, the Edmonton Oilers are slowly coming close to finalizing their roster.
The majority of the team is already set in stone, with the top line most likely consisting of Connor McDavid centering Zach Hyman and Jesse Puljujarvi, while Leon Draisaitl will most likely center Ryan Nugent-Hopkins and Kailer Yamamoto on the 2nd line. But one part of the team that’s wide open and remains a big question mark is their bottom 6.
One of the largest issues with Edmonton in the past has always been their lack of forward depth behind their two superstars. Last year, with McDavid, Draisaitl, and RNH off the ice, the Oilers were outscored 24-45 at 5v5 (a goal differential of just 34.8%). But, with the additions of forwards such as Zach Hyman, Derek Ryan, Warren Foegele, etc, it seems like this problem is gradually coming to an end, as Edmonton currently has one of the deepest forward cores they’ve ever had in a long time. So, that begs the question; how good are their current options to build their 3rd and 4th lines?
*Unless stated otherwise, all stats in this article are via EvolvingHockey

Starting off with (arguably) Edmonton’s best depth forward, the Derek Ryan signing was among Holland’s best moves this offseason.
Playing with Calgary in each of the last three seasons, not only are Ryan’s even-strength production rates surprisingly high for a bottom 6 forward, but a lot of his value comes from his stellar two-way play. He’s put up excellent shot suppression results in each of the past 3 years and is a reliable penalty-killer. He checks a lot of boxes for a responsible two-way 3C, something the Oilers have been after for quite some time.

Foegele is a very good but unique player to me. He’s a solid 5v5 producer, but his finishing results have been near the bottom of the league. He creates a lot of scoring chances, but he doesn’t always capitalize or finish on those chances.
Additionally, while his offensive scoring chance play-driving does seem outstanding, public stat models may be overrating Carolina’s ability to generate chances (like suggested here, private stat models that NHL teams use like SportLogIQ have the Hurricanes generating fewer chances than public models state). In simpler terms, this could mean many of their players’ play-driving results are higher than they should be, and Foegele could be one of them.
Nonetheless, he’s still a very strong offensive player, largely due to his tenacious forechecking abilities and speed. His solid defensive results at both even-strength and in the limited amount of time he’s spent penalty killing is also an encouraging sign. He should start the season as the 3rd line left-wing, but if he can figure out his finishing issues, I think giving him a shot in the top 6 could even be a good idea.

Perlini is a player I’m somewhat unsure about. He’s had a strong pre-season thus far, with 4 goals, 1 assist and a beautiful shootout goal in 4 games.
Perlini didn’t play in the NHL last year, as he put up nine goals and seven assists in 21 games with HC Ambrì-Piotta of the Swiss league (via HockeyDB). In the year prior, Perlini’s results with the Coyotes were dreadful all-around. He’s never managed to have a positive impact at 5v5 in the NHL in any facet, but one encouraging thing about him is that he’s had above average finishing results in each of the three years before 19-20 (Perlini has scored more goals than expected in each of the 16-17, 17-18 and 18-19 seasons). He may have a bit of upside when it comes to goal-scoring.
What’s the worst-case scenario for Perlini? He only has a $750K cap-hit, so they could send him down to Bakersfield with no harm done at any point in the season. What’s the best-case scenario? He produces well at 5v5 and compliments Ryan and Foegele well, as those two could benefit quite a lot from a good finisher.

Signed on a PTO, Sceviour is also a pretty low-risk player like Perlini. One difference between the two of them is that Sceviour’s 5v5 results are much more encouraging.
His production stats have been OK and he’s been pretty low-event in pre-season so far. But he’s been an above-average player in driving scoring chances and possession in a limited role in Pittsburgh. Sceviour would be a pretty solid option for the 4th line and I would be fine with him replacing Archibald.

I don’t think Devin Shore should be a regular player on this deep forward core.
He’s a pretty average penalty killer, and his possession results in 20-21 were near the worst of all time for Oilers players since 07-08 (Shore’s CF% of 39.7% is 8th last for all Oilers players since 07-08). He doesn’t produce much at 5v5 either and doesn’t really provide a lot to any facet of the game in my opinion. He’s perfectly fine as a 14th forward and is getting paid the appropriate money for that role.

The topic of Zack Kassian is pretty interesting to me, as opinions on him are mixed throughout the Oilers fanbase. He had a rough year last season, and his play last year was very similar to his play before he started to spend significant time with Connor McDavid and Leon Draisaitl. He went on a SH% heater playing with those two from October-December of 2019 (20.9% SH% during that span, the league-average SH% is usually around 9-10%), and has cooled off quite a bit since.
The totals he posted in 19-20 were not sustainable, and it is a bit alarming that he’s been outproduced by Kris Russell at 5v5 since his extension.
I don’t have a lot of problems with Kassian playing in a 4th line role, as he’s always been a solid bottom 6 grinder before playing with two superstars in 19-20. But until he proves otherwise, he shouldn’t be getting a lot of time on ice in the top 9 over the current options available in my opinion. Oilers Now radio host Bob Stauffer has said that Kassian will spend a lot of time in the top 9 and could even get some top 6 minutes, and although I don’t think he has earned them yet, I hope he proves me wrong.

After struggling to play as the 3C in 20-21, the role he was initially signed for, Turris is currently competing to play as a 4th line winger. Turris was an excellent offensive player in Ottawa, possessing a great shot and strong transition abilities, but he regressed quite a bit in Nashville and hasn’t shown any flashes of his former self in Edmonton so far.
Dave Tippett deployed Turris in a fairly defensive role (he was 9th on the Oilers in Defensive Zone Starts/60), and it was clear he was not fit for that. Largely due to poor defensive instincts and how he struggles at covering his man, Turris has always posted weak defensive results throughout his career. But, there is a chance he could play somewhat well in an offensive 12-13F role.

Ryan McLeod was called up to the NHL late in 20-21 and only played in 10 games, but it was already pretty evident that he was one of Edmonton’s best depth forwards. In those 10 games, McLeod proved to be a very defensively sound player and a strong skater. He didn’t produce much, but with McLeod on the ice at 5v5, the Oilers controlled 52% of the shot attempts and 53% of the expected goals.
Although he hasn’t been eye-popping in pre-season so far, I think he should be a lock for a roster spot, most likely as the 4th line center.

Tyler Benson has not played much in the NHL, as he played 7 games with Edmonton in 19-20 and has spent the rest of his time in Bakersfield. It’s an extremely small sample, but he had OK possession metrics in those 7 NHL games (49 CF%). As for his play with Bakersfield, via Pick224, the Condors controlled 60.3% of the goals (a ratio of 41:27) with Benson on-ice at even strength last year.
From the games I’ve watched of him, Benson is a sneaky good playmaker as his biggest strength is his passing ability (Benson was 3rd in the AHL in assists last year), and I feel that his skating is not as poor as others say. Benson seems to have improved in that regard based in the pre-season so far, as he definitely looks a lot faster.
I really feel that he deserves more of a chance in the NHL. He primarily played together with Ryan McLeod and Cooper Marody (who is now on waivers) on the top line in Bakersfield last year, and that line was arguably the best line in the AHL. So, deploying Benson alongside McLeod on the 4th line with less responsibility could turn out to be a very good idea.

So, there you have it. There’s a variety of good options and possible line combinations this year. My preferred lines (not a prediction/projection) would be a 3rd line of Ryan centering Foegele and Perlini, while the 4th line has McLeod centering Benson and Sceviour.
Ryan would be the main two-way presence on the 3rd line, while Foegele adds speed and aggressive forechecking, and hopefully, Perlini can turn out to be the primary finisher on that line. Meanwhile, Benson and McLeod could rekindle their chemistry in a sheltered role. Sceviour’s solid play-driving could be a valuable trait to fit alongside those two, or Kassian could play in that role if he can bounce back from 20-21. I feel that these combinations can assist in fully maximizing Edmonton’s skill and talent.
Whatever combination they go with, I think it’s pretty safe to say that Edmonton’s depth forwards will see a significant improvement this year. What are your thoughts on how the bottom 6 should be shaped?
Find me on Twitter (@NHL_Sid)
Nation Takes
Oilers Talk
Recent articles from NHL_Sid