A Look Into Potential Left-Defenceman Targets for the Oilers 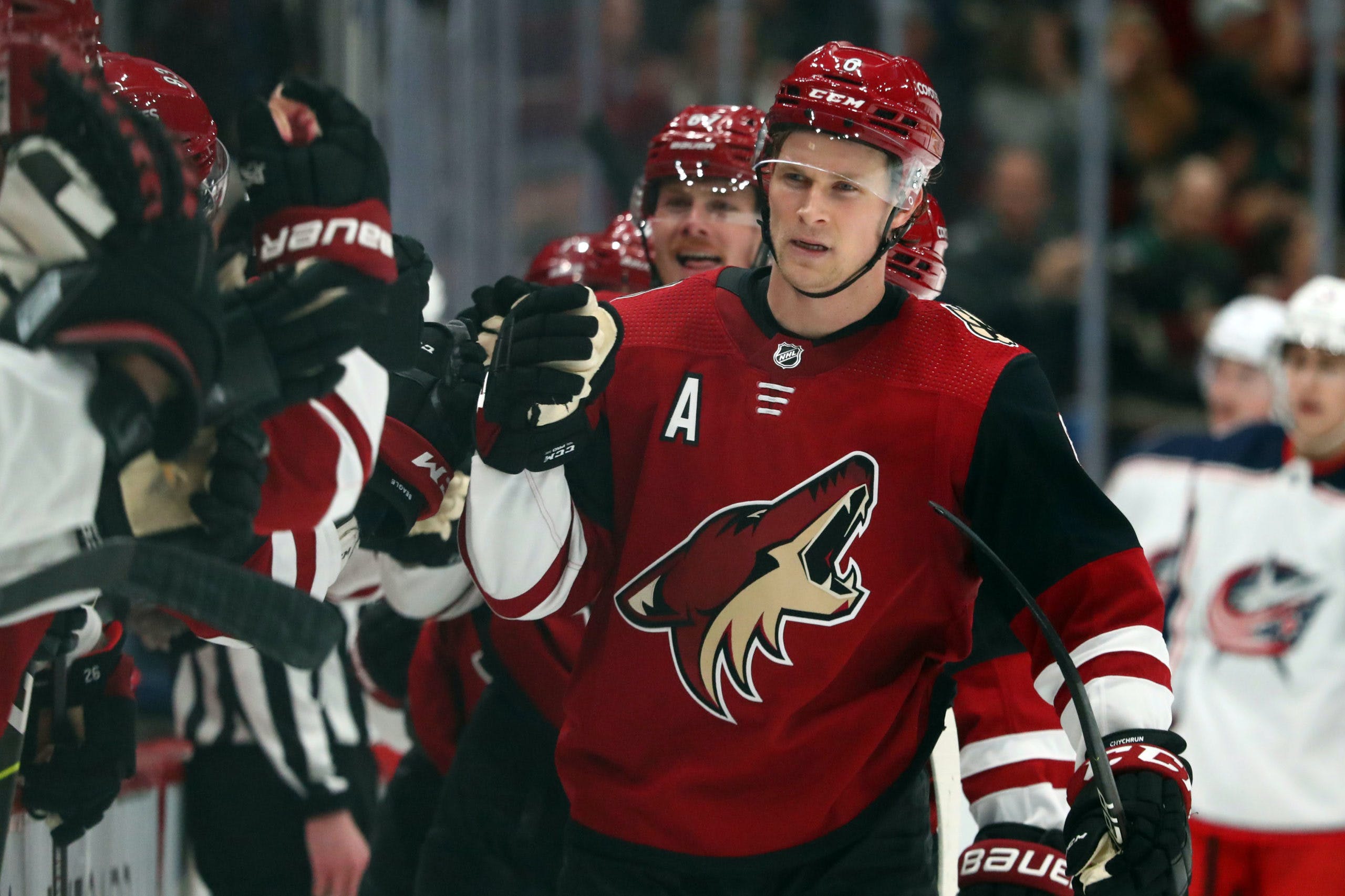 By NHL_Sid
11 months ago
The Edmonton Oilers are coming off of a win against the Seattle Kraken, a game in which they had one of their strongest 5v5 performances of the season. In spite of this, they still rank 24th in the league in 5v5 goal share, alongside a 2-6 record in their last 8 games. They’ve gradually begun trending up again after their recent losing skid, but it’s still pretty evident there are still several holes in their current roster.
Elliotte Friedman has speculated that the Oilers could be looking for a 3rd line center, a left-defenceman, and a goalie.
Ken Holland spent a combined (roughly) $15M on two left-defencemen this off-season ($9.25M for Nurse, $5.5M for Keith), so it is frustrating that Edmonton’s LD depth still isn’t adequate.
It’s even more unfortunate considering the fact that Edmonton didn’t re-sign Dmitry Kulikov, who’s currently enjoying an excellent year in Minnesota.
While Duncan Keith had a good start to the season, he’s declined in his most recent games before his injury and prior to heading into COVID protocol. Overall, the pair of Keith – Ceci hasn’t been strong, especially as of late.
The duo has been out-scored 12/17 and out-chanced 117/134 in the 289 minutes they’ve played together at even strength. I think it would be best for the Oilers, Keith, and even Ceci if he was deployed on the third pair. It’s a limited sample, but Ceci did post exceptional numbers away from Keith when he was paired alongside Philip Broberg. Ceci could definitely thrive alongside a LD other than Keith.
In this piece, I’ll be diving into the several left-defencemen that Edmonton may realistically target, and assess whether they check several, key boxes for the Oilers:

A) Can they generate and prevent scoring chances at a high rate at 5v5?
B) Can they play against tough opposition and succeed?
C) Will their cap-hit cause an issue?
D) How significant is the asking price for this player?
*All stats via EvolvingHockey and all contract-related info via PuckPedia unless stated otherwise

There’s been plenty of speculation regarding the Oilers and if they should be targeting defenceman Jakob Chychrun. Elliotte Friedman reported that Arizona’s ask for him is “massive,” and has also reported that the Oilers are indeed interested in him.
Personally, I really like Chychrun as a player. He’s an excellent top-four defenceman. Although Chychrun went on an unsustainable shooting% heater last year, similar to Darnell Nurse, Chychrun’s underlying numbers have been exceptional. He can drive and suppress scoring chances at a high rate.
I feel that Chychrun’s plus/minus is very misleading. The +/- stat in general is exceedingly flawed, as it doesn’t account for teammates or goaltending. The Coyotes have an 86.7 SV% with Chychrun on-ice; that’s not entirely his fault.
He also plays against tough competition at a high rate on a poor team. If the Oilers acquired him, they would have the flexibility to deploy him in either an offensive role or in a defensive shutdown role. Per PuckIQ, Chychrun has positive relative metrics when deployed against elite competition.
Chychrun’s cap-hit is excellent for a player of his caliber.  $4.6M for four more years is a wonderful deal. Of course, as a result, and as stated before, Arizona’s asking price is reportedly “massive,” which is an issue.
At the same time, the Oilers are in Year 7 of Connor McDavid and Year 8 of Leon Draisaitl. The time to win for the Oilers is now. As much as I like Philip Broberg and his potential, he should definitely be on the table in a potential deal, and so should just about any other blueline prospect. Chychrun is only 23 himself, so it isn’t as though you are giving up many years anyway.
Chychrun is the best defenceman available on the trade market right now, and should definitely be on Edmonton’s radar.

At the same time as Friedman mentioned Chychrun, Jeff Marek speculated that the Oilers could perhaps go after a different Coyotes defenceman in Shayne Gostisbehere.
Gostisbehere used to be a prominent two-way defenceman at 5v5 in Philadelphia from 2015-2018. However, at this stage of his career, he seems like a player that excels primarily at special teams, which is really not the type of player that Edmonton needs.
The Coyotes generate scoring chances at a lower rate with Gostisbehere on-ice, and allow chances against at a higher rate. His even-strength production isn’t anything spectacular either. In addition, Gostisbehere plays sheltered minutes. He’s only played elite competition at a superior rate than 16% of the league.
He’s signed for two more years at $4.5M, which isn’t much of a bargain, especially relative to Chychrun and his contract.
In my opinion, the Oilers shouldn’t pursue Gostisbehere. He doesn’t fit the needs of this team, and arguably might even make the team worse at 5v5.

Montreal defenceman Ben Chiarot has reportedly drawn interest from several teams. Friedman and Marek have speculated that he could net Montreal a first-round pick, or perhaps even more.
He’s certainly an intriguing player. His unique combination of age, size, experience, physicality, and “intangibles” is a dream for many general managers, but there are multiple red flags that the Oilers should consider.
Chiarot does play tough minutes, but per PuckIQ, out of the seven defencemen in Montreal that have played a minimum of 200 TOI against elite competition in the past two seasons, Chiarot ranks dead last in both goal and scoring chance share. I’d say he’s more suited for an offensively-inclined third pairing role, as opposed to a top-four role on a contender.
His overall scoring chance results are OK at best, and he doesn’t excel defensively in his own end. Per Corey Szjadner (@ShutdownLine on Twitter, he manually tracks individual microstats), Chiarot’s zone denial rates rank in the 20-30th percentiles among defencemen. To make matters even worse, he takes a lot of penalties.
Given these red flags, Ben Chiarot should not be a player Ken Holland should target.

The Columbus Blue Jackets are currently 5th in their division and don’t seem poised to contend. Consequently, they’ll most likely be sellers at the deadline, and the Oilers could pursue one of their defencemen: Vladislav Gavrikov.
Gavrikov is a fairly average offensive defenceman, but he is excellent defensively at suppressing both goals and chances against. Per Corey Szjadner, his zone denial rates rank in the 70-80th percentiles among defencemen. In addition, his rate of playing time against difficuly competition is roughly at the level of the average 2nd pair defenceman.
His asking price is probably not too high, and his cap-hit is affordable as well. He’s under contract for two more years at $2.8M.
Gavrikov wouldn’t be at the top of my list in terms of potential LD options, but he would be a very solid target for Edmonton to pursue. There’s lots to like about him.

Jake McCabe is a superb defensive defenceman. I advocated for signing him in the off-season, and I still feel he’d be a good addition.
Playing at a high rate against elite competition on poor teams like Buffalo and Chicago, and posting these defensive results is an impressive feat. He’s under contract at $4M for four more years, which is a pretty decent deal.
I wouldn’t expect his trade value to be high, but it is worth noting that Chicago only signed him this past off-season to his four-year value. It seems unlikely that they would deal him now. However, Chicago was expecting to do much better than they have and the GM who signed him has been replaced.  It’s very possible there will be a new plan in Chicago and that may mean McCabe is available.
If that’s the case, the Oilers should consider pursuing him. He checks a lot of boxes for what the Oilers need for their 2nd pair. A duo of McCabe – Ceci could be the kind of shutdown pair that Dave Tippett would love.

Assuming the cap ceiling will be raised next season, per PuckPedia, Edmonton has roughly $7.2M in cap space to:
Consequently, there are several questions about what Edmonton can and will do next summer. In my mind, this only amplifies the need for the Oilers to address their issues and contend now, as it may be difficult to improve from here with this cap situation in mind (unless Keith retires, although the odds of that are currently unknown).
As stated before, this is the seventh year of Connor McDavid and Leon Draisaitl’s eighth.
The Oilers need to win. Now.
Jakob Chychrun should be at the top of Ken Holland’s list of LD targets, but Vladislav Gavrikov and Jake McCabe are also solid options if he can’t acquire Chychrun. They should stay away from Gostisbehere and Chiarot.
Of course, these players aren’t the only left-defenceman available. Mark Giordano and Nick Leddy, for example, were on the TSN Trade Bait Board on December 8. However, Giordano is having a poor season in Seattle, and a significant factor for that is most likely his age. He’s gradually declining, and the Oilers shouldn’t consider him for a top-four role at all.
As for Leddy, he’s been largely below average in terms of goal and expected goal share in the past three seasons on Long Island and in Detroit. Combined with his dreadful $5.5M cap-hit, there’s no reason why Edmonton should pursue him.
Oilers Now host Bob Stauffer had also brought up Carson Soucy in the past. Soucy’s possession results have been dreadful, while his high-quality chance results are fairly average. He’s also relatively sheltered, placing in the 36th percentile in quality of competition. I see him as more of a solid 3LD, rather than a top-four defenceman.
As the deadline approaches, the market may change but already there are numerous options the Edmonton Oilers could pursue for their 2LD role. It’ll be interesting to see what Ken Holland does.
What are your thoughts? Do you think it’s worth trading for Jakob Chychrun? Do any of the other names on this list interest you, and who do you think the Oilers should target for a 2LD role?
Find me on Twitter (@NHL_Sid)
Nation Takes
Oilers Talk
Recent articles from NHL_Sid