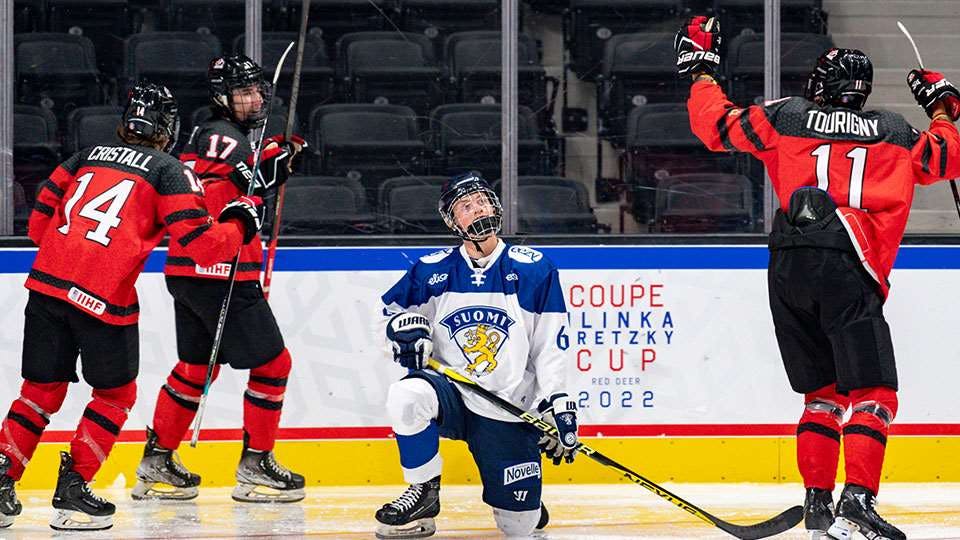 By Liam Horrobin
5 months ago
Team Canada is heading back to the Hlinka Gretzky Cup final for the first time since 2018 after beating Finland 4-1.
If it weren’t for Scott Ratzlaff, Team Canada would’ve found themselves down for the first time at the Hlinka Gretzky in the first period. Ratzlaff stopped seven shots in the opening frame, with most of them being grade-a chances. The Canadians left it late but took the lead into the intermission. Ethan Gauthier forced his way to the front of the net through traffic and beat the Finnish netminder with a filthy backhand attempt. It’s a goal that will challenge Riley Heidt for Team Canada’s goal of the tournament.
Like the first, Canada relied heavily upon Ratzlaff to keep them in the game. They struggled to produce much offence, however, thankfully for them, the Finnish goaltender helped them out. Callum Ritchie’s initial shot was stopped by Eemil Vinni and pushed behind the net. Unfortunately for Vinni, the puck hit his skate and deflected into the net, giving Canada a 2-0 lead.
Canada managed to break away from the Finns scoring twice in the third period. Matthew Wood scored the third when the puck found him wide open in front of Vinne’s net; then the second came from Denver Barkey only 19 seconds later. Unfortunately for Ratzlaff, his shutout streak came to an undeserving end with 17 seconds to play in the third period. The Irma, Alberta, native went 179 minutes and 42 seconds without conceding in the tournament. An incredibly impressive streak for the Seattle Thunderbirds netminder.

*quotes from the Hockey Canada Website
“We came out a bit nervous tonight, but as the game went on, we got our legs under us and got going. I thought we got a lot cleaner in the second period and then in the third period, we were back to our game. We got stronger as the game went on, but we have to clean up a few things for tomorrow,” said Assistant Coach Al Letang.
“We showed tonight that we can battle through any adversity. It wasn’t easy, Finland gave us a real challenge and I thought we got better as the game went on. We need a better start tomorrow, but I know these guys will be ready to go,” said Matthew Wood
“I felt really comfortable tonight. The team played extremely hard in front of me. Our guys keep everything to the outside and it makes my life easy. We knew this was going to be a tough game, but our guys competed, and I think we raised the bar and know what we need to do tomorrow,” said Scott Ratzlaff

The Canadians now face Sweden in the final tonight after the Swedes beat Czechia 6-2. Canada played Sweden in their last group stage game and beat them 3-0. The puck drops at 4:00 p.m down in Red Deer.