Canada runaway with the game against Slovakia 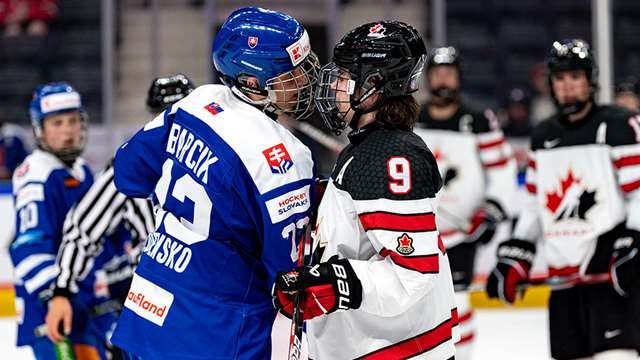 By Liam Horrobin
4 months ago
Another day, another win for Team Canada at the Hlinka Gretzky Cup, however, this time around, it didn’t come as easy as their 14-0 win over Switzerland on Sunday. Yes, they beat Slovakia 9-1, but for the first half of the game, their opponents seemed to find the Canadian’s weakness.
Slovakia clearly came into this contest with a game plan to try and knock Canada off their game by being aggressive and getting under their opponent’s skin and it worked to an extent. Canada wasn’t able to get much of a rhythm in the opening 10 minutes and conceded two penalties. With that said, the 22-time gold medalists found a way to break the deadlock soon after. Brayden Yeager fired on the powerplay, beating the Slovakian goaltender short side for his second of the tournament. Late in the period, Zach Benson doubled the Canadian’s lead with an elite one-timer off-a-faceoff set play.
Dylan MacKinnon gave some of that aggression right back to the Slovakians but mistimed his hit as hit shoulder connected with the head of the Slovakian defender. He was fortunate not to receive more than a two-minute minor on the ice.
Canada took over the game in the second period and a big reason why was their discipline. In the first, they allowed Slovakia to dictate the narrative of the game with their aggression and it drew Canada to send them to the box. In the second, Canada settled down and played their game then simply out-skilled them. The hosts scored four goals in the second from Yager, Tanner Howe, Riley Heidt, and Cameron Allen making four 6-0 after 40 minutes.
The scoring continued in the second with Canada adding three more goals. The spirit of the Slovakians had been sucked out of them at this point and Canada started to skate circles around them. However, goaltender Samuel Urban never stopped battling for his team and was unfortunate to allow nine goals in spite of his best efforts. Without him, this game could have hit the teens again. Heidt added his second of the game and was followed by Gauthier and Tanner Moldendyk. The scoring wasn’t finished though as Slovakia got themselves on the board with a fantastic goal. Peter Cisar dragged the puck around the sliding Canadian defenceman and went top shelf on Carson Bjarnason, ending the shutout bid.
Canada struggled to start, but after a conversation with the coaches in the first intermission, they calmed down in the second and ran away with the game. The further they advance the more disciplined they’ll need to be because now their weakness has been revealed. If you can get under the Canadian’s skin there’s a chance to win, and if you’re the USA, Sweden, or another contender you’re going to test that theory, again.

*quotes from the Hockey Canada Website
“Coming off the game vs the Swiss, it’s a bit scary for a coach as you aren’t sure what to expect from, your guys, but we came out tonight with the right mindset. Our puck pressure was non-stop. We were stopping and starting, forcing turnovers and we really used all our guys. Everyone was working hard and deserved the win,” said Head coach Stéphane Julien
“I thought Slovakia had some push back early and that was good for us. I’m proud of the guys, we stood our ground and we had to work. This was a good test; we need to make sure we are sharp heading into the game vs Sweden,” said Carson Bjarnason
“I thought as a group, we played well. Credit to my linemates, they were putting pucks in good places and if I get the chance I’m going to shoot. Luckily tonight, they dropped for me,” said Brayden Yager.

Canada closes their group stage games with a matchup against Team Sweden tonight. Sweden is also undefeated with wins over Switzerland and Slovakia, who they outscored 13 to 4. The Canadians will need to be wary of Otto Stenberg who leads the tournament with seven points.