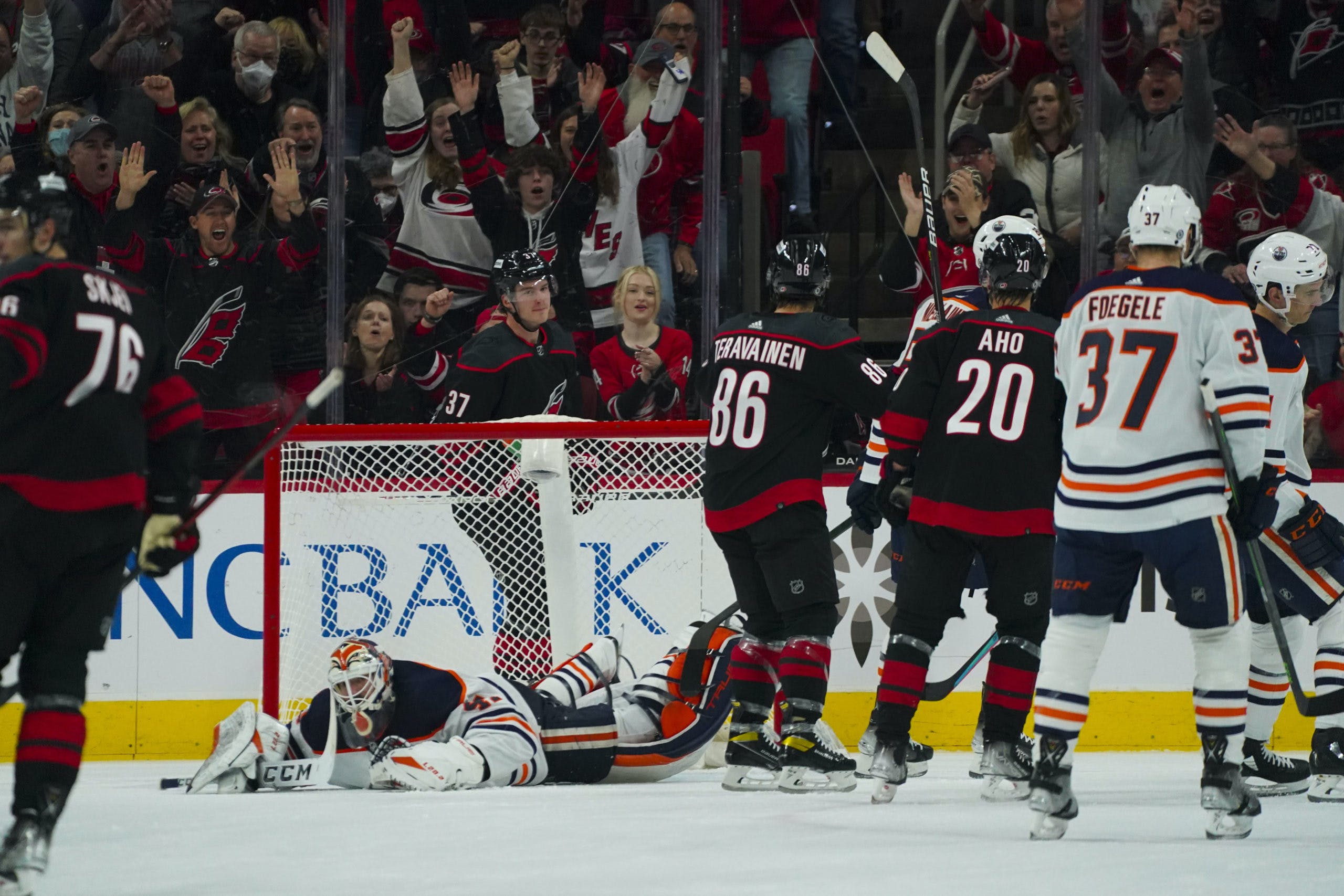 By Zach Laing
11 months ago
You can’t be upset with that performance. Final score: 2-1.
All in all, an impressive game against an elite Carolina team. The Oilers hung in all afternoon and deserved a better fate. BaggedMilk has the Wrap Up.

On the game: “I think we lost the special teams battle there. 1-1 game at even strength. I think we were pushing, we just ran out of time there at the end. It was a competitive game. They’re a really good team and we showed up, just fell short.”
On going 0/4 on the powerplay: “Yeah, it’s not fun. I think they have a good penalty kill, but we’re a confident powerplay. Just one of those nights you couldn’t get it set up and get going. I thought our five-on-five was really strong.”
On the three-game stretch and details winning/losing games: “For sure. I think that it’s encouraging for our group to go play these three games with a back-to-back for us against three really good teams. We came out with one out of three. We wanted more, but I thought we played well in all those games. Later on when it gets to the nitty-gritty of the playoffs and whatnot — games are tight, teams are good and this is a big learning experience for us. We’ll be better moving forward.”
On the Oilers slow start: “It was tough. We scored the first one, but it was offside obviously which is unfortunate. You don’t want to go down 2-0, but I thought our group battled back. There’s two things you can do: you can lay over and let them run over you, or you can battle back and play hard. I thought we did that. we got one, but fell short.”

On the game: “I thought we came out and we competed all night. They’re a good team and we were coming off a back-to-back. I thought we showed up, played well. We’re in the business of winning though, so we’re a little frustrated.”
On details winning/losing games: “Yeah, I mean we played some of the best teams in the league the last three games and we showed up every single night. Definitely a step in the right direction. Frustrated with the results a little bit, but we got to build off it.”
On the Oilers’ pushback: “I think we’re a pretty confident group with the way we’re playing. We believe in the systems and each other, so if we’re down by a couple it seems that everyone is there to pick each other up and push in the right direction. I thought we did a great job tonight of not letting the game get out of hand and fight back.”

On going 0/4 on the powerplay: “Yeah, not ideal. We had a couple looks and it didn’t go in for us. Credit the other team, they’re one of the best kills in the National Hockey League. But we didn’t find a way on our powerplay, and our penalty kill gave one up. I think that’s an area we can continue to clean up. There was a mistake here or there and it led to their goal. But we can be better for sure. When you’re playing a game against a team as talented as this team is, as hard-working as the Carolina Hurricanes, those are the small moments with the game you have to find a way to win. Tonight, we didn’t. That said, I thought our compete was off the charts. I thought they pushed us, we pushed them. It was a heckuva hockey game with lots of good in it.”
On the first period: “I think a few things happened in that first period. Number one, we had a goal called back. I thought we had a pretty decent start in the first five minutes. We did some things, breakout-wise, that allowed us to play with pace and negate one of the best forechecking teams in the league. We scored a goal, it got called back on an offside. That’s an unfortunate thing that happened. I thought we got the four-minute powerplay and our captain, our leader wasn’t on the ice for that. That affects things. In the end, there was a few mistakes we made that ended up in the back of our net. We can clean those up, as I said. Those are growth moments as we move forward. Like I said, I believe that there’s a lot of good in that game. Our team showed me a lot in this game, in a tough environment in a back-to-back situation. We’re going to go through that game, try to clean up some of the things that need to get cleaned up, and we’re gonna accentuate the good things we did.”
On McDavid/Yamamoto: “McDavid took one to the jibs there and there was a laceration and some dental work and that type of thing. For Yamamoto, he was banged up. I don’t think it’s anything major going forward, so he’s day to day dealing with some bumps and bruises.”
On the Tampa Bay-Florida-Carolina swing: “I thought we had a chance to win every game we played on this road trip. For me, the competitiveness in our team has impressed me through these three games. The level of opponent has been excellent and each one of those opponents presented different issues for us as we went into that game. I thought we tried to do some things through the first three games that I saw positive responses with our team. We had a chance to win each one of those games. Just like we don’t overly get high, we’re not going to do anything more than process this game. We’re going to work on some things in practice and get ready for a very game Philadelphia Flyers team Tuesday.”
On details winning/losing games: “I would say there were moments in this game that maybe didn’t go the way we wanted them to, but there were a lot of really good moments, and a lot of really good details in our game. I would go there first. Is there things we can get better at? Yes, there are. But we’re going to stick with it, we’re going to keep growing our game, and look forward to Tuesday night.”
Nation Takes
News
Oilers Talk
Post Game
Recent articles from Zach Laing