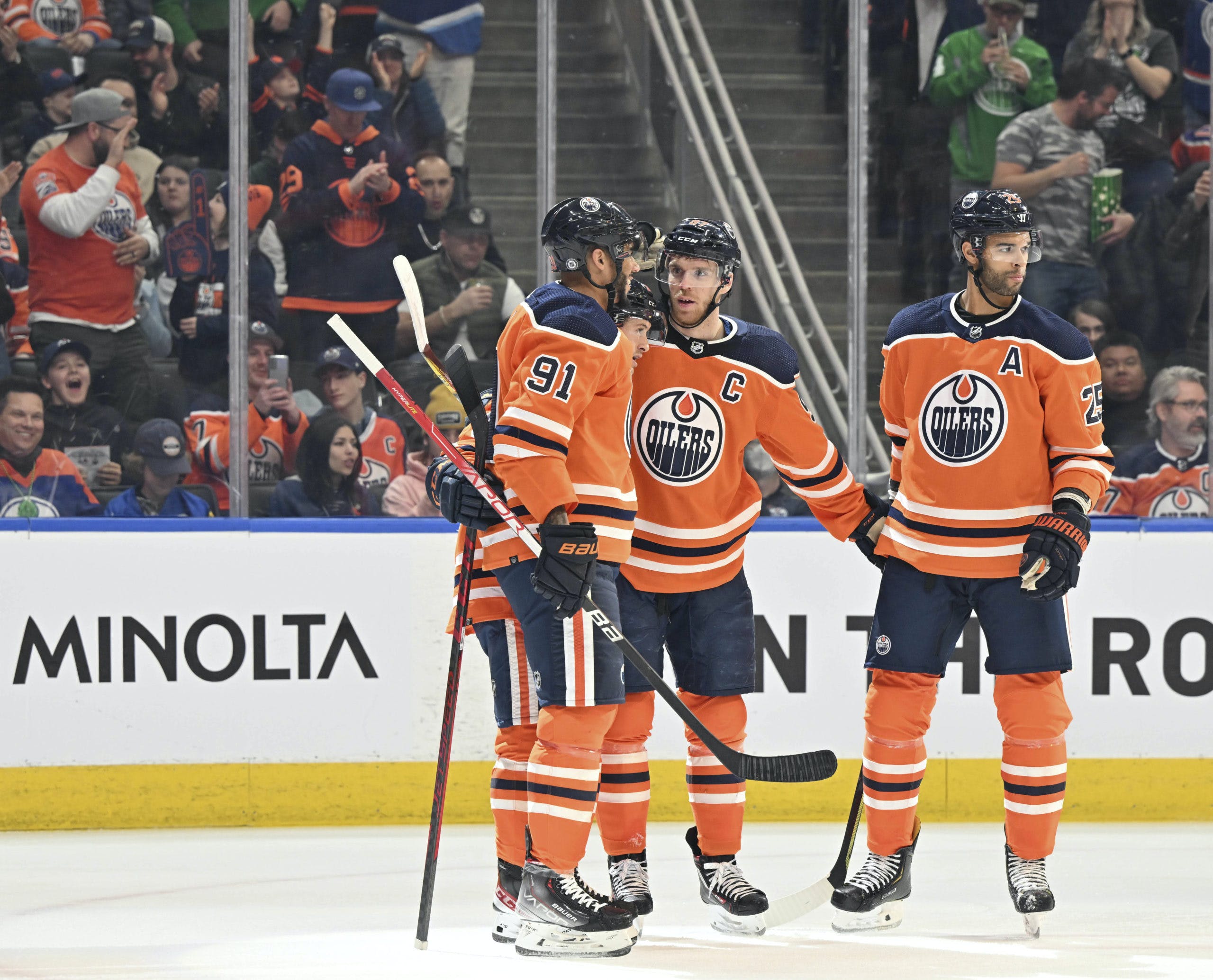 By Zach Laing
8 months ago
Well, that was easy. Final Score: 6-1.
I took care of tonight’s Wrap Up so you can get more of my thoughts here, but that was an impressive effort all around from the Oilers.

Barrie on controlling the game: “Yeah, I think it was exactly that. It was a full 60 minutes and I think maybe as good of a game as we played all year. After two periods, we realized we played a pretty solid game up to that point and we made a point of coming out and drilling home that last 20 to show us what it feels like to play the full game.”
Hyman on his line dominating play: “Yeah, I got robbed on the one, the breakaway, the puck was bouncing a bit. I got a field goal on it. I thought we played well off the cycle. That’s something we’ve been harping on a bit. Playing off the cycle, being a bit more heavy. I thought we had a lot of possession and a bunch of chances off it.”
Hyman on Ryan Nugent-Hopkins being close to returning, soon playing with a full lineup: “Nuge is a huge piece. Every part of the game he plays. He’s a huge player for us, we’re excited to get him back when he’s ready. It’s definitely exciting to have everybody back. I don’t think we’ve had everybody back since Kaner has been here. It’s nice to get close to it and be playing well when it’s happening.”
Barrie on if it’s important for the Oilers to learn how to shut down games like these: “Yeah, I think you saw what can transpire there against Detroit the other night there. You’re playing teams that are not really in the race. They’re playing loose, they’ve got some good young speed and talent. It can definitely be tough when they’re playing loose to shut it right now. You don’t want to just sit back either. I think the Detroit game was a nice lesson for us and then it was nice to learn from that and put it to the test tonight. I thought we were great all the way through. Schmiddy was great too.”
Hyman on Mike Smith, if it was in the teams’ forethought to give him an easy night: “I think that’s always the goal, to make sure that you help your goalie out as much as you can. In the first, I think there was a half-breakaway and a drive to the net he made both saves. He played steady all night and I thought his ability to move the puck when they were tired, they dump it in and he breaks it out for us. We’re transitioning and we’re back in their end. I thought he was great, I thought it was great to get him the win and he earned it. It’s awesome.”
Barrie on if this was “the Zach Hyman game” in terms of his style of play: “Well when there’s three guys on him he finds a way to outwork him all. That’s why he was so coveted and why guys wanted him. We were lucky to get him. The thing about Hyms is he’s playing the same way every night. You can rely on him and he’s a guy you can count on. He’s been great this year and he’s been a big part of the year.”
Hyman on if there’s a trap element to these games against bottom teams: “Sometimes, but I think where we are in the standings, every game for us it motivation. We’re not safe by any means. We’re in the position where we can’t take anyone lightly, I would say. But definitely, when you’re playing against teams who have nothing to lose and are playing loose, they’re playing to score, they’re playing for a back and forth game. Obviously, like Tys said, we saw in Detroit we got up early and we kinda played into that type of game. I thought tonight, we just played the same way from start to finish and didn’t give them much. It was nice to see”
Barrie was asked about if Devin Shore has gotten the “dad bump” by playing well after the birth of his first kid: “Yeah it’s great. Maybe with the lack of sleep, you just don’t get time to think or worry about anything else, you just go out there and play. It’s great for Shoresy and nice to see him tucking a few here.”
Hyman on Yamamoto’s goal: “Big time, Yamo’s been playing great. That line has been playing really well and I think he’s elevated his game. He’s shooting the puck and he’s shooting to score. It’s great to see. He has an undercover good shot, I don’t think people realize that.”

On the game: “I thought we got contributions from everyone, all four lines, three d-pairs, mike smith was excellent, penalty kill was good. We had a shorthanded goal, we scored a powerplay goal. All facets of the game seemed to be firing on all cylinders. Because we had everybody going, we were able to spread the minutes out nicely tonight.”
On the McDavid-Kane-Yamamoto line: “Well, you have the speed element and the puck handling element with Connor coming through the neutral zone and what he can do in the offensive zone. I don’t think he’s getting enough credit for what he’s doing defensively. He makes a lot of really good subtle plays in his own zone. he stops on pucks, he had some really good box-outs tonight as well. You have someone with a ‘dog on a bone’ mindset in Yamamoto, someone who wins pucks and 50/50 battles all over the rink. Then you add the size and skill of an Evander Kane, I think it has the elements or the recipe of a good line. They’ve been playing well together. a few weeks ago, we flipped the centres. we’ve gotten some good responses from everybody involved. That lines been a heckuva line for us and they continue to pace us.”
On what he said to make sure another 3-0 lead didn’t escape them: “That got taken care of yesterday. Most importantly, a coach’s job is to call attention to some things and provide an environment for learning from different situations. That game against Detroit, in the end, our players found a way to win that game. We weren’t perfect, we’ll be the first people to admit that. But I think yesterday, we addressed the situations that led to how close that game was and we talked about what we wanted to do going forward when we found ourselves in a similar position. It just so happened that it happened tonight. I thought it was a really mature game from our group. We played hard, we played fast, we got pucks in behind the other teams d-core so they had to turn and solve problems. You asked me what I said on the bench: I think the players did the talking.”
On Mike Smith, looking for a game to build off of: “We have full confidence in Mike Smith. He’s somebody who after he recovered from the flu bug, he had some time to work on his game and he put a lot of work into it. He earned the right to feel confident. I think if someone just picked up that stat sheet and it said 6-1, you don’t think there might’ve been some good scoring chances against us — there were. When we broke down at times, Mike Smith was there. That inspires confidence in his teammates as well.”
On Connor McDavid getting high-sticked toward the end of the game: “Stitches. Sutures and he got zipped up. He’s just fine.”
On Zach Hyman, if this is the type of game that endears him to coaches: “Yeah, I think every game he kind of endears himself to his teammates and his coaches. You never have to worry about his effort level. I think he had a couple assists tonight and helped set up some goals, but he did a lot of other good things on the forecheck, on the cycle. He had numerous chances to score, he just seemed a little snakebit tonight. He’s a solid player that plays in all situations — powerplay, penalty kill, 5×5. that line with Leon and Jesse has all the makings of a big, tough line that can really grind a team down in their own end.”
On Puljujarvi, Russell and their first games back: “I thought Jesse got some good minutes in. He had some good moments. getting that big body up and running again. For him, I thought it was positive and he feels good, so I was happy with his game. Russell made a lot of really good defensive plays. he was in shooting lanes, he had a tight gap, he made good plays with the puck. big factors in our team win tonight.”
On if he goes to Smith against new jersey: “We got a plan. We’re going to digest this and enjoy this win for the next 10 minutes or so, then we’re going to rest up and refuel. We will have a skate tomorrow and we’ll sleep on it and make our decision tomorrow.”
Zach Laing is the Nation Network’s news director and senior columnist. He can be followed on Twitter at @zjlaing, or reached by email at zach@oilersnation.com.
Nation Takes
News
Oilers Talk
Recent articles from Zach Laing