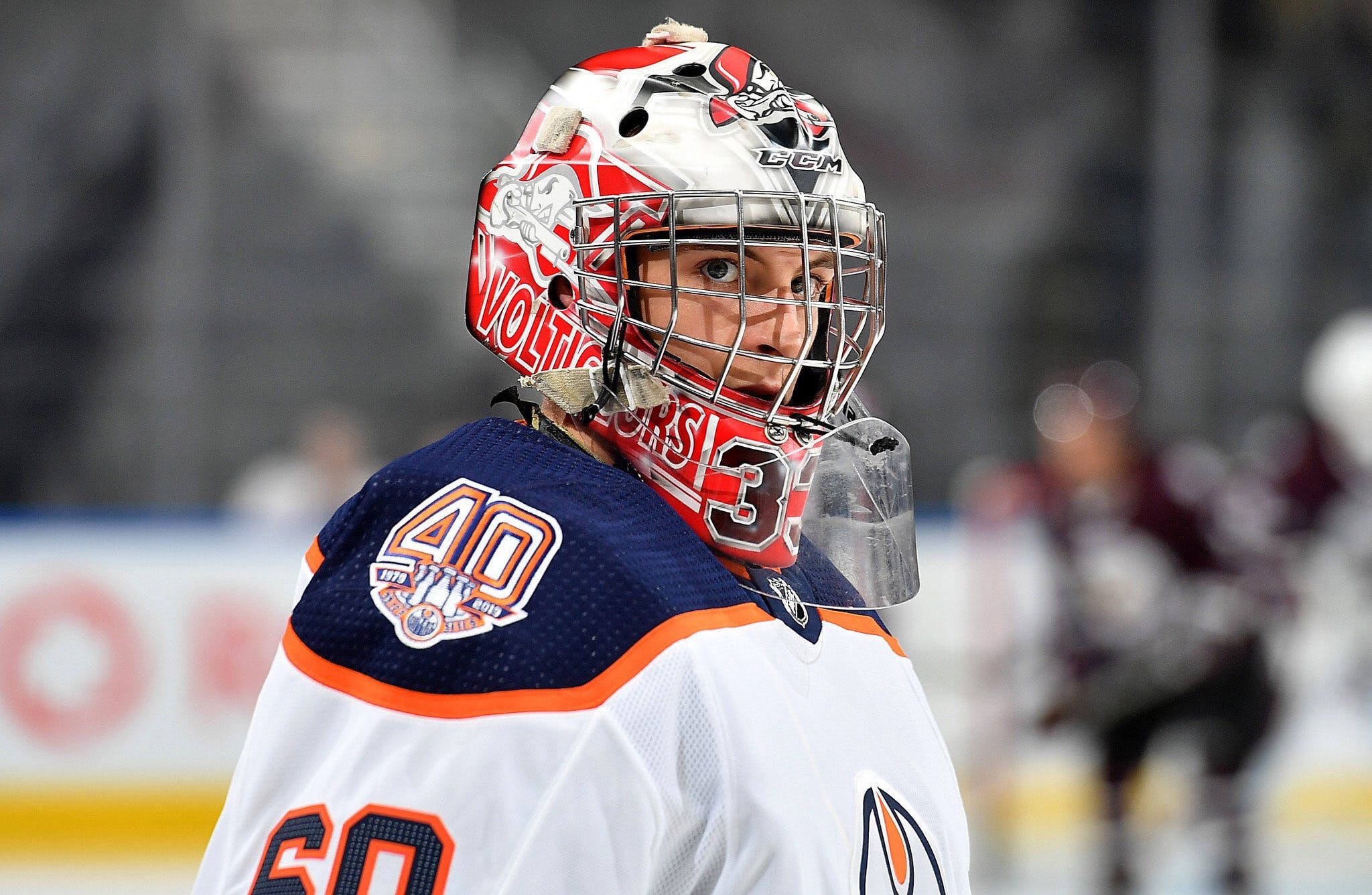 By Liam Horrobin
2 months ago
In late August, we spoke about Olivier Rodrigue. The Edmonton Oilers drafted Rodrigue in the 2018 NHL draft, 62nd overall, from the Drummondville Voltigeurs in the QMJHL. He had an excellent junior career split between Drummondville and the Moncton Wildcatswhilst also representing Hockey Canada at the World Juniors in 2020.
What we spoke about previously with him was his consistency. It has been a thorn in Rodrigue’s side since turning pro three years ago. During that span, Rodrigue has dressed for three different teams and was also part of the black aces for the Oilers during last season’s playoff run.
The point here is that he has not been able to unpack his bags. He has been bouncing around from team to team, which can be uncomfortable for anyone, and then you mix in the COVID-19 factor, it’s been a ride for the young goaltender.
“The past couple of years have been hard with COVID,” Rodrigue admitted on OilersTV a few months ago. “Travelling back and forth between the ECHL, AHL, and even being on the taxi squad too, hasn’t given me time to settle.”
However, all of this travel and bouncing around feels like it is in the past for the former Voltigeurs. Rodrigue is calling Bakersfield home and has finally found a stable home with the Condors after beating out NCAA free agent signing Ryan Fanti for a spot on the roster. It was never carved in stone that Rodrigue would play in the AHL this season, especially since he was in rookie camp and then sent off early in the main camp. He earned his role and now has earned the opportunity to stay.
He has only played seven games in the American Hockey League this season; however, his numbers are impressive. He has only had two games in which he allowed more than two goals and a save percentage lower than .900. Right now, Rodrigue is sitting nicely with a 2.60 GAA and a 0.918 save percentage. In comparison, his partner, and NHL veteran, Cal Pickard, is sitting with a 3.12 GAA and 0.899 save percentage in eight games.
A player with a similar path to Rodrigue was Stuart Skinner. Skinner spent his first two years bouncing between the AHL and ECHL, struggling to find his game consistently. Then in year three, his game elevated to another level, playing in 31 games for the Condors and finishing with a 2.38 GAA, a 0.914 SV%, and 20 wins to his name. The following season, he played 13 games for the Oilers, and everyone in the city was begging Ken Holland to keep him around for the season.
Could this be the path Rodrigue is on? Only time will tell, but the Oilers might have another promising goaltender on their hands for now. All it took was to find him a stable home, and now we are seeing the best from their former 2nd round pick, Olivier Rodrigue.
Oilers Talk
Recent articles from Liam Horrobin