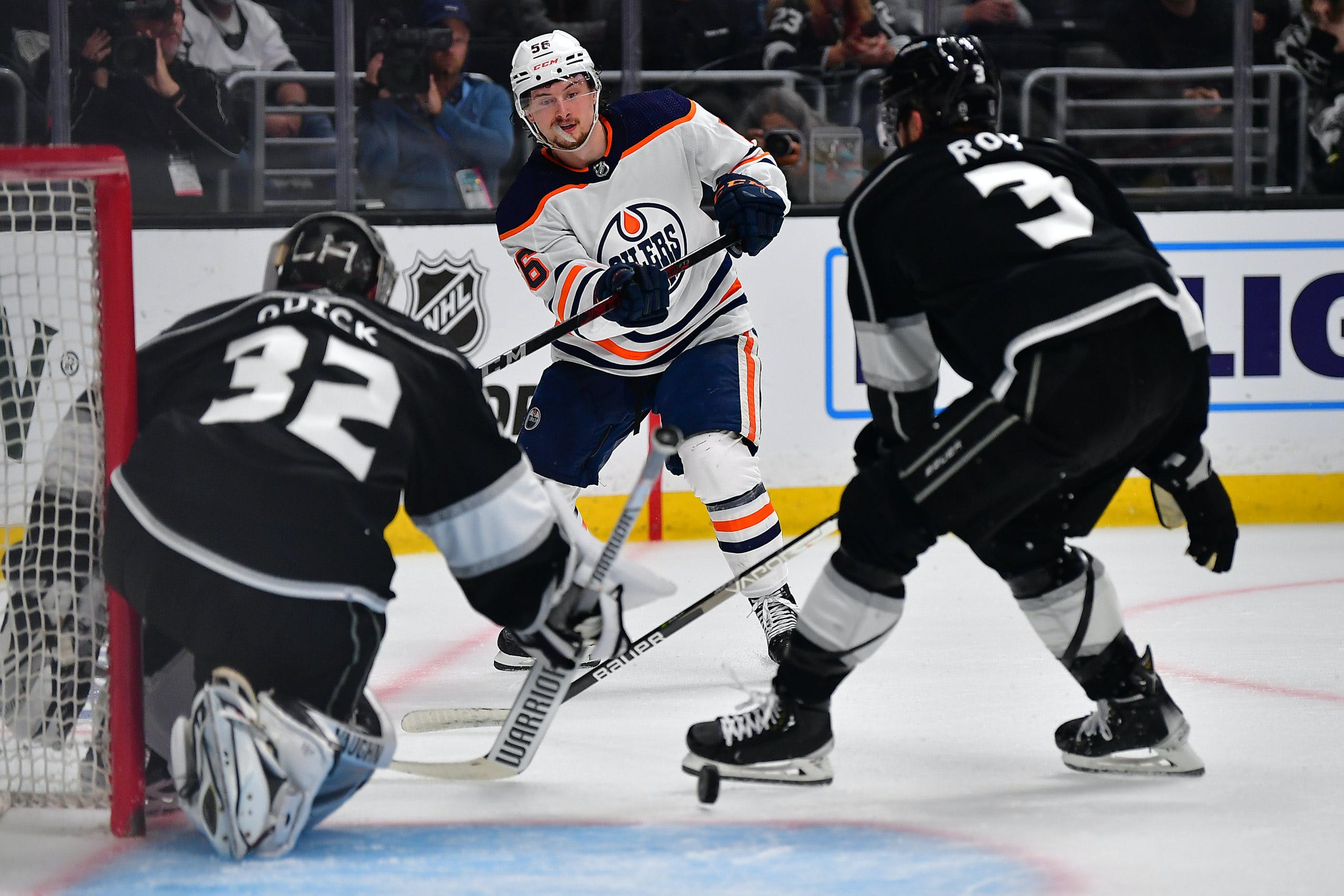 Yamamoto produced 20-21-41 in 81 games (0.51 PPG) while Puljujarvi scored 14-22-36 in 65 games (0.55 PPG). I was told by the NHL management type that goals carry a bit more weight.  They were very close this season and even over the past two years. Puljujarvi has 29-32-61 in 120 games (0.51 PPG) and Yamamoto scored 28-34-62 in 133 games (0.47 PPG).
This season Yamamoto averaged 16:52 TOI/game while Puljujarvi was at 16:14.
What is interesting is when you compare their production and usage under Jay Woodcroft and Dave Tippett.
Under Tippett:
Puljujarvi: 10-15-25 in 42 games (0.59 PPG) and averaged 16:58/game.
Yamamoto: 8-8-16 in 44 games (0.36 PPG) averaging 16:23/game.
With Woodcroft:
Puljujarvi: 4-7-11 in 23 games (0.48 PPG) averaging 14:54/game.
Yamamoto: 12-13-25 in 37 games (0.68 PPG) averaging 17:27/game.
Puljujarvi had a better start to the season, while Yamamoto had a better second half. Puljujarvi also got injured and had COVID in the second half and he never looked as comfortable when he returned.
The Oilers need to be careful of recency bias. Puljujarvi had a strong start and weaker finish, while Yamamoto struggled early, but finished very well. Puljujarvi turned 24 years old in May, while Yamamoto turns 24 in September. They are the same age, but have very different styles and different strengths and weaknesses.
Puljujarvi is big and still doesn’t know how strong he is. He’s a solid forechecker and uses his reach to knock down pucks and keep plays alive. He gets many good looks, but has yet to show an ability to finish consistently. Yamamoto is a very tenacious and cerebral player, likely because he had to be due to his lack of size. Woodcroft, and Tippett before him, mentioned how teammates, specifically Connor McDavid and Leon Draisaitl, like playing with him. It is because he’s predictable. He reads the ice well and knows how to use his linemates.
Puljujarvi has more upside, in my opinion, but he needs to improve his puck skills and his edge work/balance. Both are those are things he can work on, and should be a focal point of his off-season training. Yamamoto is more versatile in the eyes of his coaches. He is used on the penalty kill, and he had 166 offensive zone starts and 148 defensive zone starts at 5×5, while Puljujarvi had 183 offensive zone starts and 105 defensive zone starts.
I don’t agree with the notion Puljujarvi is a great defensive player because of his on-ice GA or XGF%. He had the highest on-ice Sv% on the Oilers at .941. As Mike Kelly outlined earlier this week in our discussion about GF% and xGF%, a goalie’s Sv% can drastically alter those two stats for a forward. Puljujarvi has yet to be used on the PK, and had way more offensive zone to defensive starts, so based on usage neither Tippett or Woodcroft viewed him as a dominant defensive player. At least not to this point.
When you look at recent signings for players who filed for arbitration, it is realistic to expect Puljujarvi and Yamamoto to land a salary between $2.6m-$3.2m. Andrew Mangiapane got $2.45m and he’d played 1.5 season and averaged 0.47 points/game. He’s similar in size to Yamamoto. Chris Tierney averaged 0.52 points/game the season when he filed for arbitration, but he’d also scored 48 points the previous year. Ottawa signed him for $3.5m, but they were also a team with loads of cap space and in a rebuild. Teams with more cap space, and in rebuilds will often pay a bit more than teams who are contending, and that’s why the Oilers could play hardball a bit more.
Yamamoto and Puljujarvi are not foundation pieces. They are both, solid complementary forwards, and if they want to land a contract similar to Tierney they might price themselves out of Edmonton. The challenge for the Oilers is they signed Warren Foegele at $2.75m when he was 25 years of age and hadn’t produced like Yamamoto and Puljujarvi. I’m sure Yamamoto and Puljujarvi’s camp will look at that deal and say we deserve more. It is all part of the negotiating process.
If the Oilers can sign them for a combined $6m then Edmonton should get good value on their investment. The challenge is in order to do that, some other pieces need to be moved out.