Early Goals Against A Concern? 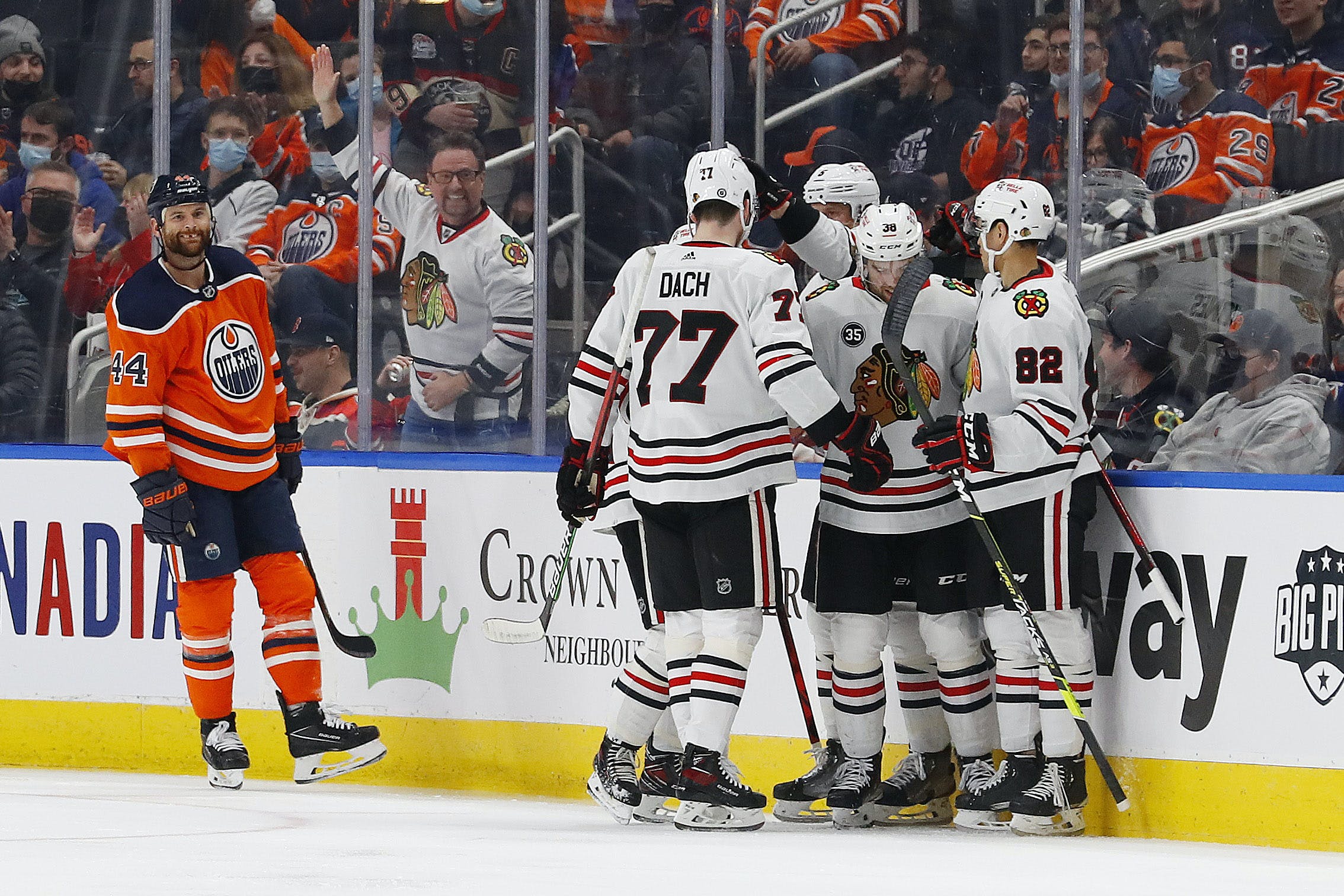 By Jason Gregor
9 months ago
Edmonton just finished a gruelling five-games-in-seven-day stretch. They weren’t nearly as effective or structured as the previous five games under Jay Woodcroft and it was evident in a 7-3 loss. The Oilers had won five in a row prior to the loss and today in Tampa Bay Woodcroft was able to conduct his second practice since being hired. Sunday’s loss wasn’t a huge surprise to me. Fatigue is a factor, especially when you consider they played two games in the Pacific time zone, then one in Mountain, one in Central, and back again in Edmonton. Add they were playing a very good Minnesota team, so the result wasn’t shocking. However, that doesn’t excuse the result. The entire team wasn’t sharp, and I’m sure Woodcroft will focus on some defensive zone coverages today.
What shouldn’t be expected, however, is the number of goals Edmonton has allowed early in games when @Mike Smith is starting.
Smith has played nine games since December 29th. He was off for a few months before playing in St. Louis, and then missed another month with a thumb injury, so we note the return from injuries as a possible factor.
In his nine starts since December 29th, Smith has allowed 12 goals within the first five shots of the game.
Let’s establish not every goal is the goalie’s fault. If you are giving up 2-on-0 rushes or breakaways, or great looks in the slot, I’d never just blame the goalie and that occurred v. St. Louis and Minnesota. But when I notice this many goals early in games it does raise an eyebrow.
Not playing in a month will be a factor in the St. Louis and Vegas games. Smith admitted the game felt like “it was going 100 miles an hour,” early against Vegas. He looked better as the game wore on against Chicago and then he had very solid performances against the Islanders and Kings. He was fine against the Ducks, and got a lot of offensive support, which every goalie will welcome now and again.
The Oilers as a group have struggled allowing the first goal. It happened with Smith was injured in November and December, so it clearly isn’t solely on him. He’s started nine of the previous 20 games since, and I looked at the other 11.
In those 11 games, the goalies allowed a total of four goals within the first five shots. Smith had four games where he allowed multiple goals within the first five shots, so I think it is accurate to suggest he needs to sharpen up his game early on. Again, I’m not blaming him for the loss to the Wild. At best he might have saved one of the first three goals. That game was over regardless of who was in goal as the Oilers gave up far too many quality chances in the first period. The Wild had seven shots from the slot and three scoring chances off the rush in the first period.
You don’t want to give up quality shots early, but sometimes, as @Stuart Skinner did in San Jose, you need your goalie to make some key saves early while the skaters find their groove. Smith did that against the Islanders and was the main reason they won. But that needs to happen more often than allowing early goals.
Smith and the Oilers might view the Minnesota game as an outlier, and focus on his performances against the Islanders, King and Ducks, but it is a fine line. Again, early goals aren’t solely on the goalie, but there has been a stark contrast to early goals over the past 20 games when Smith is in net compared to Koskinen or Skinner.
It needs to improve when Smith starts. 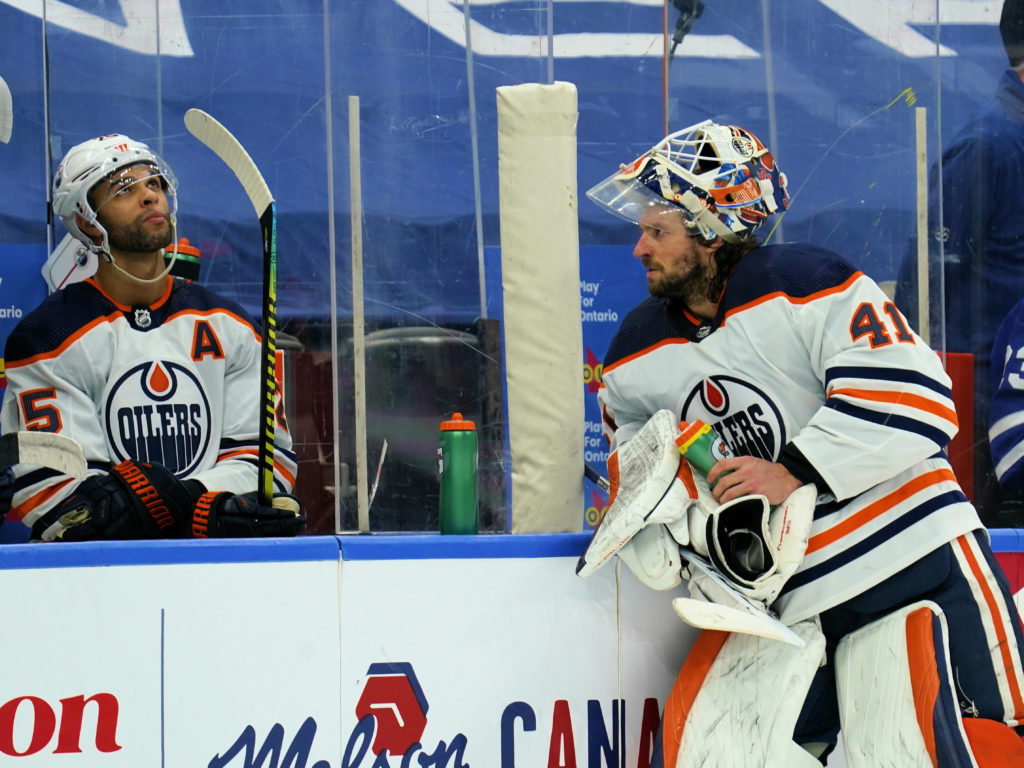 Jan 5, 2022; Toronto, Ontario, CAN; Edmonton Oilers defenseman Darnell Nurse (25) and goaltender Mike Smith (41) during a break in the action against the Toronto Maple Leafs during the third period at Scotiabank Arena. Mandatory Credit: John E. Sokolowski-USA TODAY Sports
Many fans have been asking why Mike Smith is playing so deep. I’m no goalie expert, so I asked Kevin Woodley from In Goal Magazine if it is an issue.
“Mike’s played deep since resurrecting his career in Arizona after adapting the same inside-out philosophy from Sean Burke, who resurrected his own career with it after learning it from Benoit Allaire, who then went to the Rangers and taught it to some guy named Lundqvist,” said Woodley. “Playing deep works for some goalies. I thought Smith started taking more ice situationally more often last season, but it would be human nature to return to what you know coming back from injuries and time off like he is this season. I think it is also often oversimplifying to say a goalie is too deep, too — the first goal for example, he’s deep cause it comes from low to high, so maybe you’d like a push out there, but not many are getting out fast on a play like that.”
“I have noticed a few goals that went in short side between body and the post on lateral plays to quick shots or one-timers, but that goes back to something we talked about when he first got hurt: recovering into posts and getting that rotation back to those posts is a good thing, but as he’s improved his range of motion appears to have widened his butterfly. It’s made it harder to seal that short side when he hits that post because that extra butterfly width means his leg is further out beside him then it used to be, which is what had me worried about because of how he was hitting those posts and having to lean over more.
“Ideally you’d like him to take a little more ice from a deeper starting position when he reads an open look in certain areas, and not stay on the goal line which he was doing last season,” added Woodley.
I enjoy Woodley’s explanation on why goalies play certain ways, and his explanation on why the odd goal goes in short-side was easy to visualize.

Edmonton plays in Tampa tomorrow, then they have early games in Florida (10:30 a.m. MT Saturday) and Carolina (11 a.m. MT Sunday), before they play Philadelphia and Chicago next Tuesday and Thursday.
Winning three games would be a great trip, but the Oilers have to at least go 2-2-1. The Oilers started 7-1 under Dave Tippett before going 10-9-3 in their next 22 games. They were 8-2-1 in their first 11 games under Ken Hitchcock (when he replaced Todd McLellan in November, 2018), but then went 6-13-3 in their next 22.
Edmonton has had a great start under Woodcroft, but they need to continue their solid play, rather than repeat what occurred after the initial excitement of a new coach wore off.