By Robin Brownlee
7 months ago
More than once last night, my usually trusty old gut told me that the Edmonton Oilers going four games deep against the Colorado Avalanche in the Western Conference final was probably the end of the line for a team that hadn’t been as far along in the post-season since getting to the Stanley Cup final in 2006.
Like when Cale Makar sifted a puck through traffic past Mike Smith to open the scoring. Like when Devon Toews narrowed Edmonton’s lead to 3-2 just 31 seconds into the third period after the Oilers had ignited bedlam inside Rogers Place and jumped ahead 3-1 on goals by Zach Hyman, Ryan Nugent-Hopkins and Connor McDavid.
And after all that, it surely had to be curtains when Mikko Rantanen put the Avs up 5-4 with less than six minutes to play, no? Well, not so fast, Bub. Zack Kassian, who wouldn’t even be in the lineup if his critics had their way, tied it with less than four minutes to play, forcing overtime.
When all of the back and forth was done after Artturi Lehkonen settled it 6-5 with a deflection 1:19 into overtime, the Avs had their date in the Stanley Cup final and the Oilers had a front-row seat for a look at what it takes to play for all the marbles. Cold consolation for a team I thought had a chance to win the series – that I picked to win the series – but this was a meaningful post-season run nonetheless. 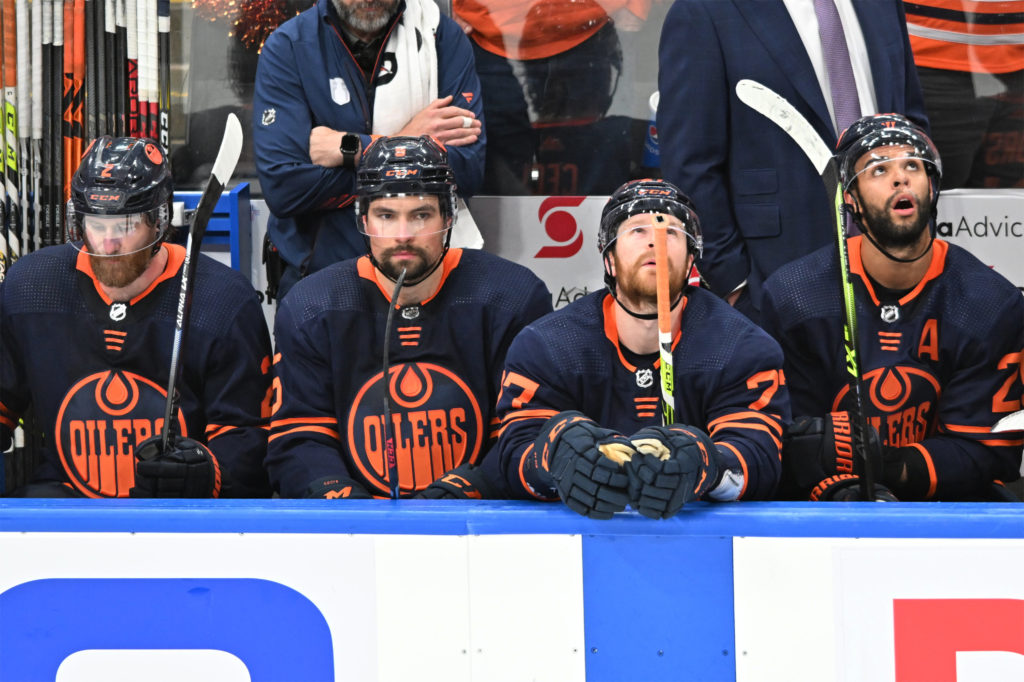 Jun 4, 2022; Edmonton, Alberta, CAN; Edmonton Oilers react after be defeated by Colorado Avalanche in game three of the Western Conference Final of the 2022 Stanley Cup Playoffs at Rogers Place.
Fans around here had something to yell about for three rounds, and it’s been a long, long time since we’ve been able to say that. As for the players, appreciating any progress made will come later when the disappointment of being swept 4-0 subsides. With the grind it takes to get three rounds deep, that could take some time. It always does.
“There’s no participation medal,” said Smith, who stood in behind a team that allowed 40 or more shots in every game of the series. “It’s very disappointing. It’s hard to get to this point. You look over the course of a season, exhibition games, training camp, 82 regular season games, the grind of playoffs to get in the conference finals. There’s definitely a loss when you don’t make it to the opening goal. That’s the feeling right now obviously.”
The Oilers were without Evander Kane, suspended one game for this hit on Nazem Kadri, last night. They were without injured Kailer Yamamoto. Leon Draisaitl played the series clearly hobbled by a lower-leg injury and blueliner Darnell Nurse played the entire post-season with a torn hip-flexor. Fans throughout the post-season wanted to know what was wrong with Nurse, why he struggled to get around. Well, now we know.
“A resilient group,” Nurse said. “We started off the year great. We go through a stretch where we go from (being) the top team in our division and conference to six points out of the playoffs. A group easily could have quit on each other. I’ve seen it before. I’ve seen us get into January and February, you know, things aren’t going our way and it just piles on.
“You make a coaching change. It showed the maturity in our group we were able to turn it around. Now, we’re sitting in the final four. You don’t get to the final four by accident. Our group, we earned it and we got here, but like Mike said, there’s no participation medal. We’re all competitors so when you lose it stings. Our ultimate goal is to win a Stanley Cup and we didn’t get it done this year, so it hurts.”

Yes, the coaching change. With Jay Woodcroft summoned from Bakersfield to take over from Dave Tippet, the Oilers went 26-9-3 after his arrival during the regular season. Factor in the addition of Kane and the impact of Hyman, who was red hot in the playoffs, and you get the team that pushed Colorado to OT last night without winning a game. MacDavid was out of this world at times, as was Draisaitl. There was much to like. There is much still to do.
“We’re a hungry group, but with all that said you get to the conference finals there is a long road to get back into the playoffs and then the grind begins,” Nurse said. “There is a grind to get through that 82, and a grind to get through the next series and the next series. It sucks and it stings. We didn’t get the job done that we wanted to get done. We have a hungry group that knows that you can take steps, but you have to follow it up.”