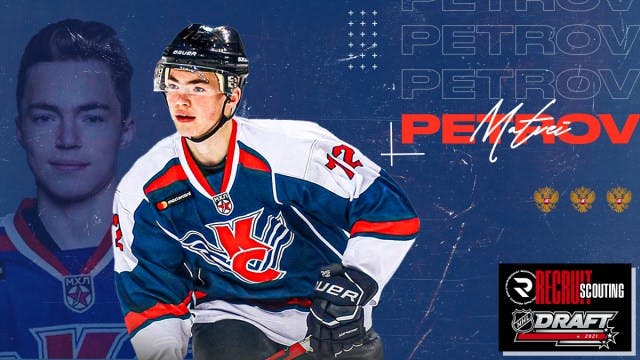 By Zach Laing
1 year ago
The Edmonton Oilers have taken two forwards in the sixth round: Matvei Petrov 180th overall and Shane Lachance 186th overall.
Petrov is a 6’2, 181 lb. winger who spent last season with MHK Krylia Sovetov Moskva in the MHL, Russias second league, where he put up some solid offensive numbers. In 58 games played, he scored 22 goals and 42 points.
He was selected 1st overall in the 2020 CHL import draft by the OHL’s North Bay Battalion but didn’t come to North America as the league didn’t have a season. Petrov was highly ranked by some scouting services.
FC Hockey had him the highest, ranked at #57 overall, while TSN’s Bob McKenzie has him ranked 92nd overall and his colleague Craig Button had him ranked 70th overall. The Athletic’s consensus board had him ranked 91st overall.
Here are scouting reports from Elite Prospects and FC Hockey, respectively:

He has the mechanics of a wrist shot down: distance between feet, downward pressure with forward force through the shot, top hand out, and keeping his chest up. Petrov can move the puck under stick, saucer it above stick, and deceive with lookoffs. – EliteProspects
A strong-skating forward who isn’t shy to throw his body around. He loves being a thorn in the side of his opponents. – FC Hockey
Matvei Petrov is a very promising player who has evident gaps in his game but he has also a lethal weapon like his shot and ability to score goals. Because he’s playing only in the MHL, he seems to be a long-term project who is a few years away from NHL. It’s tough to project his career at this stage, but he has all the tools to make it into the NHL one day. – Recruit Scouting

Lachance, meanwhile, is a big 6’4 190 lbs. winger who played for the Boston Junior Bruins last year. There, he scored six goals and 15 points in 25 games in the NCDC. He’s off to Boston University this year, where his grandfather, the legendary Jack Parker, coached the team from 1969 through 2012.
Shane’s father Scott played 819 NHL games with the New York Islanders, Montreal Canadiens, Vancouver Canucks and Columbus Blue Jackets after being drafted fourth overall in 1981.
Shane Lachance was selected in the second round of the QMJHL draft in 2020 by the Rimouski Océanic, but hasn’t played there. He’s a young birthday, being born Aug. 30, 2003, so there’s a ton of room for Lachance to continue to grow as a player.

“Big, hulking two-way winger… a very heavy shot but not much creativity with the puck… main area of concern is in the skating department… Effort, effort, effort is what you can expect with Lachance.” -DraftPro
“Shane is a massive, yet sushi-raw project… hits hard and often… His lack of offensive production, even in the NCDC, is troubling.” – McKeen’s