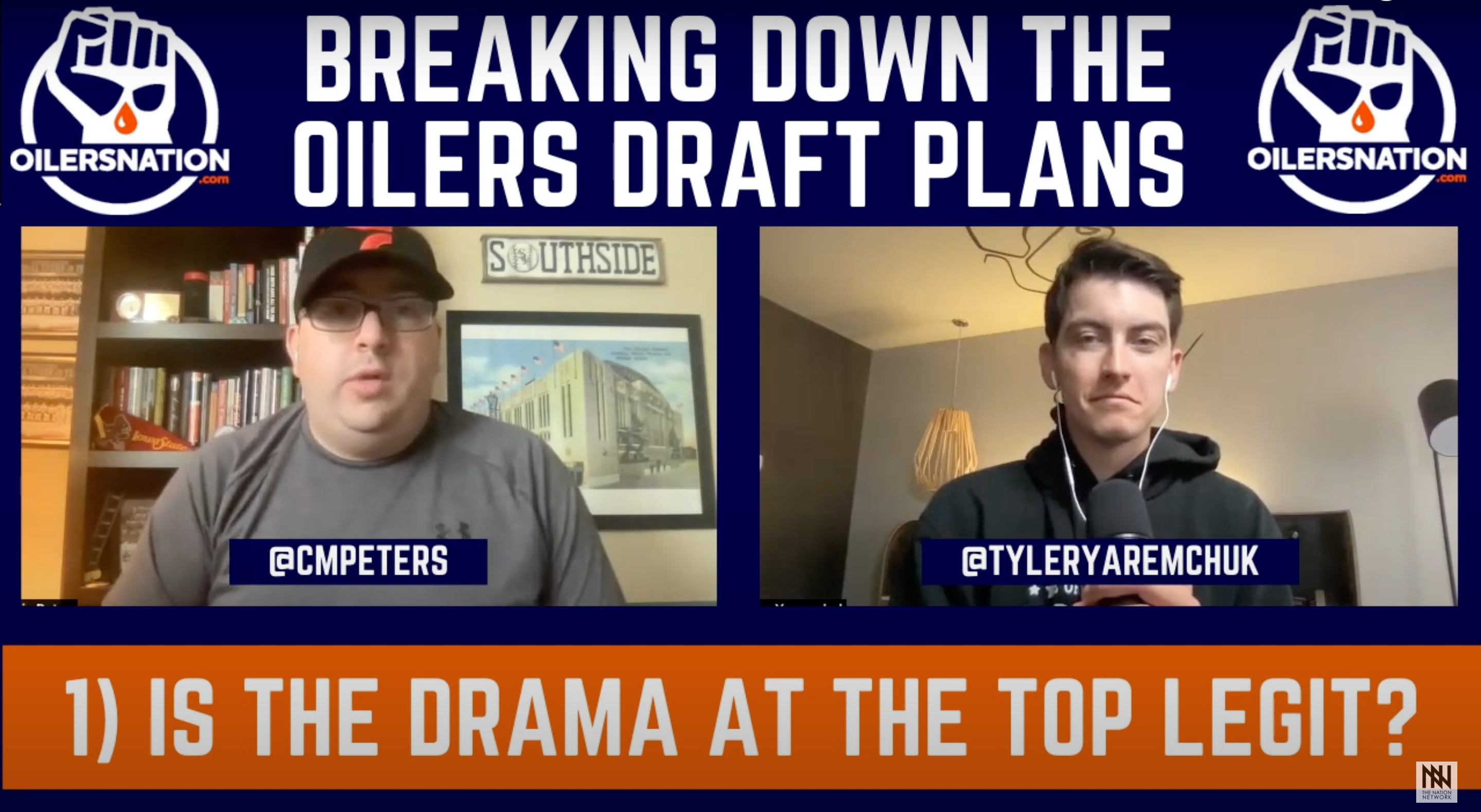 By Tyler Yaremchuk
6 months ago
To get you totally set for tonight’s NHL Draft, I sat down with Chris Peters, an analyst with Flo Hockey. We talked about the drama surrounding the first overall pick, how the rest of the top five could play out, and we dug into what the Edmonton Oilers could do with the 29th overall pick.
If you want to watch the video, it’s up on our YouTube, I also broke down what Chris had to say below.

Is the drama at the top real or fabricated?

Chris Peters: I think it’s very real. The Habs have done a great job of keeping a lid on who they’re going to pick at number one. Throughout the week, you talk to scout sources and a lot of scouts that I talked to said that there’s a real chance they take Slafkovsky. I think there’s a real chance that he’s off the board.
If that happens, it really creates an interesting cascade of events that could slip Shane Wright further down the board. Kent Hughes has said that they’re making the decision between Wright, Slafkovsky, and Cooley. I do think they’re not just throwing Cooley in there as a lark. I think there’s a reason for them to consider him at number one, obviously, he’s been number one on my board for a long time now.
It’s really tough to say. I think everything you hear on draft day, there’s a nugget of truth to some of it and there’s a lot that’s just not at all true. To see various reports of it’s Slafkovsky or it’s Wright, the fans seem to want Wright.
The short answer is yes. There is validity to the uncertainty.

A defenseman at #2 if the Devils keep it?

CP: If Slafkovsky ends up going number one, it creates an opportunity for the Devils to potentially go a different direction. Maybe trade down. See if there’s anybody that desperately wants one of Wright or Cooley to use that pick and get some more assets. That’s a distinct possibility.
I don’t think they’ll take either of the two centres if the pick comes down to them. It could be one of the top two defensemen: David Jiricek or Simon Nemec, who are both right shots. Their top defensive prospect is LOuke Hughes, who shoots left but plays the right side when you need him to. If you get a right-shot guy like Jiricek or Nemec, you’re getting a guy that projects to b in your top four in the next three or four years. So that’s another option for them.
I just don’t think with Hack Hughes, Nico Hischier, and even Dawson Mercer, who’s probably their third-line centre long-term, I just don’t see a fit for Wright or Cooley unless you want to make one of them a winger.
There are a lot of opportunities there.

You had Maverick Lamorioux to the Oilers at #29…

CP: I think when you’re drafting late in the first round, you want to take some swings and I think Lamorioux has a really high ceiling. He’s got a long way to go to get there. He’s a total project pick.
He’s big, he’s 6’6, he’s athletic, and he was one of the top performers at the combine. The thing that gives me pause is the hockey sense. I don’t like the decisions he makes with the puck. But, he has the physical tools to be a guy that could really do some damage and he can be physical and he can have some offensive ability. I just think it’s going to take him a lot longer to get there.
Especially with the Oilers, it’s obviously a speed-focused team for the most part, but then you still have that need to get bigger to get through some of those tough teams in the west. I think it can go a lot of different ways and I felt like Lamorioux is one of those guys you maybe take a swing on with a late first.

Among the forwards in that range, who are some good targets?

CP: The thing about the late first-round in this draft is that it’s going to be so unpredictable. I think there’s a number of guys that could be there in that range. If you’re lucky maybe it’s a guy like Nathan Gauthier, who is kind of that first-round, second-round tweener who’s gotten some love recently to go higher, like in the top 20 even. He might slip and be there. He’s a big centre, two-way guy, got good capability.
Noah Oslund is a real wild card in this draft. He’s a highly-skilled centre, he’s not the biggest guy, but he’s highly dynamic and makes a lot of plays. So that’s another interesting guy that could be there late in the first.
There are a lot of other guys like Rieger Lorenz and Reid Schaeffer. Lawrence played in the AJHL this year but Schaeffer is probably the guy that’s most likely to be there and be a reasonable pick late in the first.
He’s a power forward with good goal-scoring ability. He played for the Seattle Thunderbirds this year and has been a late riser. He basically ended up slotted in the early second round for me but I think a lot of those guys can make a really solid case for being a late first-round pick, I just don’t think here’s a lot of separation between say, 23 or 24 and even going as far as 50 or 60 in this draft. I don’t think there’s a ton of separation between those players.

Could Brad Lambert fall to #29 and why is he falling?

CP: Lambert has played centre and played the wing., I think he’s a winger at the NHL level I don’t think he has the defensive detail to be a centre in the league. He needs a little more time in order for that to clear out.
If he’s there at 29, I think there’s a very reasonable case to be made to take him,. You go into that pick eyes wide open. There are some red flags there. He’s been on three different teams over the last three years, there’s some doubt about his hockey sense, why are his numbers not translating to this elite skill that he has? Then there’s also this lack of consistency at getting to the interior and getting inside and making better plays. That’s why some people think that the numbers didn’t come because he was far too perimeter and he wasn’t getting to the hard areas to create offence.
The thing is if you’re a team like the Oilers and you see a guy with these elite tools, you know there’s something there to work with. There’s a ceiling there. He can get to a higher level.
There was a reason why we all believed he could be a top player. Now he hasn’t progressed at the same rate, similar to Shane Wright, but is there a way to get him back on track? If you can come at him with a development plan and also support him with whatever he needs to kind of unlock those other elements of his game, he does have that significant elite trait that you’re looking for and if you can get that in the late first round, that’s a high-value pick.
Now, he was 25th in my final rankings for Daily Faceoff so 29th is not far away from there. It’s a good opportunity. I think it would make sense and it would make the Oilers a fast team that gets faster with him.
Interviews/Pressers
Oilers Talk
Recent articles from Tyler Yaremchuk