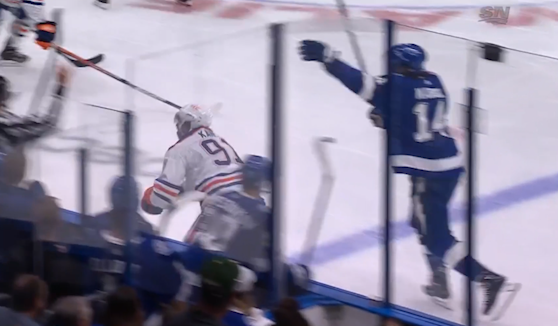 By Zach Laing
13 days ago
UPDATE: 7:20 p.m.
Oilers GM Ken Holland tells Sportsnet’s Gene Principe that Evander Kane has been taken to hospital in stable condition with a “deep cut on his wrist.” Kane is expected to undergo surgery tonight.
————
ORIGINAL:
Edmonton Oilers forward Evander Kane left a Tuesday game against the Tampa Bay Lightning after his wrist was accidentally cut.
Kane fell to the ice four minutes into the second period and as he was trying to get his footing a number of players came near to try and play a loose puck.
Lightning forward Patrick Maroon’s skate accidentally cut Kane on his left wrist. Kane remained on the ice for a brief moment, before jumping up and quickly skating to the ice. On the ice, a pool of blood remained.
Maroon, as well as players on the ice and from both benches, immediately signaled towards the Oilers training staff. The play was blown dead and paramedics joined Kane and the Oilers’ staff down the tunnel.
On the broadcast, Sportsnet’s Gene Principe said he was down the tunnel 15 feet away from where Kane came in and said the player was yelling “Help! Help! Help!”
Then playing for the Toronto Maple Leafs, Ilya Mikheyev suffered a similar injury on the ice and missed three months of play as he recovered.
Our thoughts are with Evander Kane in what is undoubtedly a scary moment.
Zach Laing is the Nation Network’s news director and senior columnist. He can be followed on Twitter at @zjlaing, or reached by email at zach@oilersnation.com.
Featured
Oilers Talk
Recent articles from Zach Laing