Oilers Have Some COVID Complications By Jason Gregor
1 year ago
Last week  NHL Deputy Commissioner Bill Daly said he expects 98% of NHL players to be fully vaccinated by the start of the season. He added it would be 15 or fewer players who wouldn’t be vaccinated. Duncan Keith got vaccinated last week. He flew to the USA to get the Johnson and Johnson vaccine, because it is only one dose, and then he returned to Canada and is quarantining until next Friday. He will miss the first week of training camp while he is in quarantine, but will return next Friday and will likely play in the Oilers final three preseason games.
I’m not big on focusing on the past or re-living “what if” scenarios in my personal life, so I won’t on why Keith didn’t get vaccinated earlier. Whatever his reasons, I’m glad he, or any person who was on the fence, finally opted to get the vaccine. Belittling those who don’t have it won’t make them get it. It isn’t ideal he misses the first week of training camp, but it also isn’t devastating that he won’t be there. He isn’t a raw rookie.
I’m sure Jim Playfair and Dave Tippett would have liked him to pair up with Cody Ceci as soon as possible, but both are veterans and they should be able to figure out each other’s on-ice tendencies quickly. With Keith gone, it will mean more playing time in the preseason for William Lagesson, Philip Broberg and Slater Koekkoek.
If Broberg makes the team it will be because of what the coaches see in preseason, not because of where he was drafted a few seasons ago.
“I don’t put a player on the team because he has potential,” said Holland when I asked about Broberg. “I’d put him on the team because he beat someone out for the spot. If we were in a rebuild I might have a different approach. If Broberg can beat someone for a job, that is great.”
I agree completely with Holland. The NHL is not a developmental league. It is about winning and Connor McDavid and Leon Draisaitl and the entire organization want players in games who give them the best chance to win now. It isn’t about developing a young player. 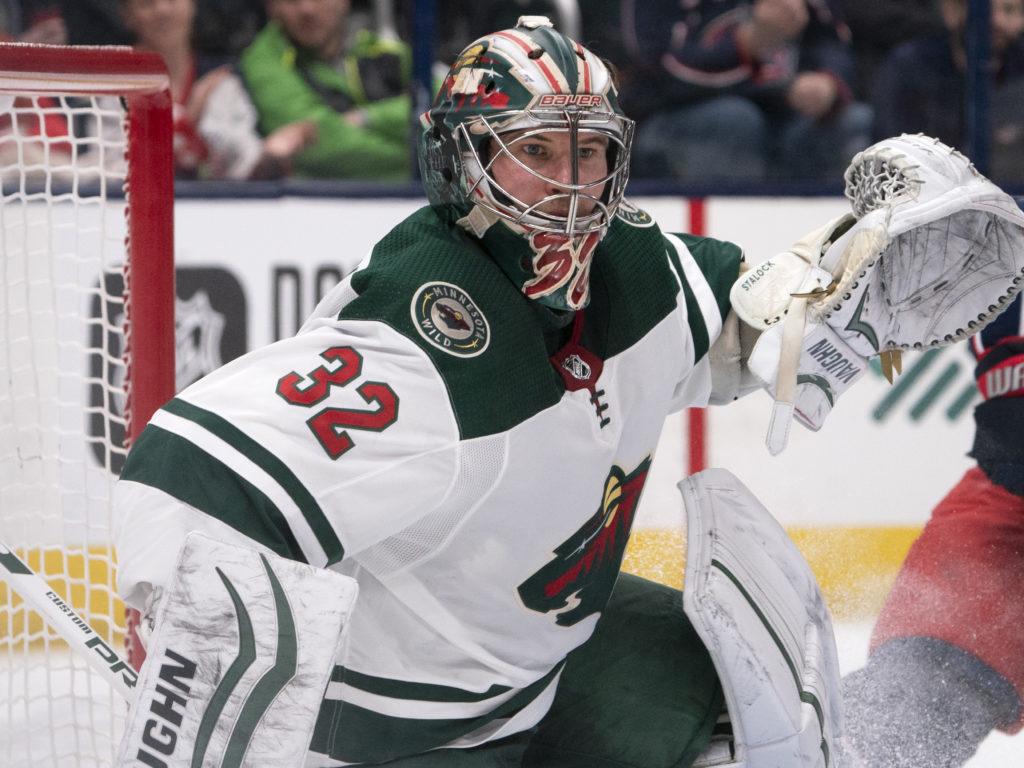 Feb 28, 2020; Columbus, Ohio, USA; Minnesota Wild goaltender Alex Stalock (32) tends net during the second period of the game against the Columbus Blue Jackets at Nationwide Arena.
— Alex Stalock likely won’t play this season according to Holland. Stalock did skate in the “Beauty league” this summer, but he met with doctors in the past two weeks and the information he received led him to opting not to play. Last November, Stalock was diagnosed with myocarditis — an inflammation of the heart muscle — after he had received a positive COVID-19 diagnosis. He practiced with the Oilers last season, but was never an option to play. And unless something changes he likely won’t play this season either. Just a reminder of why you don’t want to get COVID. Even healthy people can have long-lasting negative side effects.
— Kris Russell will not be on the ice tomorrow due to soreness in his neck. This will give Lagesson, Broberg and even Phil Kemp more opportunity to grab the coaching staff’s attention. Kemp will start in the AHL, but a strong showing in the preseason could help him down the road. Lagesson needs to play with the same urgency he had at the start of last year prior to getting injured. When he returned from injury, he didn’t have the same desperation and intensity in practice.
— With Keith in quarantine, Russell and Dmitri Samorukov injured, Edmonton will open camp with 15 D-men, and that includes Filip Berglund, Vincent Desharnais, Yanni Kaldis, Phil Kemp, Michael Kesselring, Simon Kubicek, Markus Niemelainen and Max Wanner. The first few preseason games will likely have quite a few non-NHL D-men playing for Edmonton.
— Colton Sceviour in camp on a PTO and will wear #70 in camp. With a lack of right shot wingers, I think he has a very good chance of earning himself a contract this season.