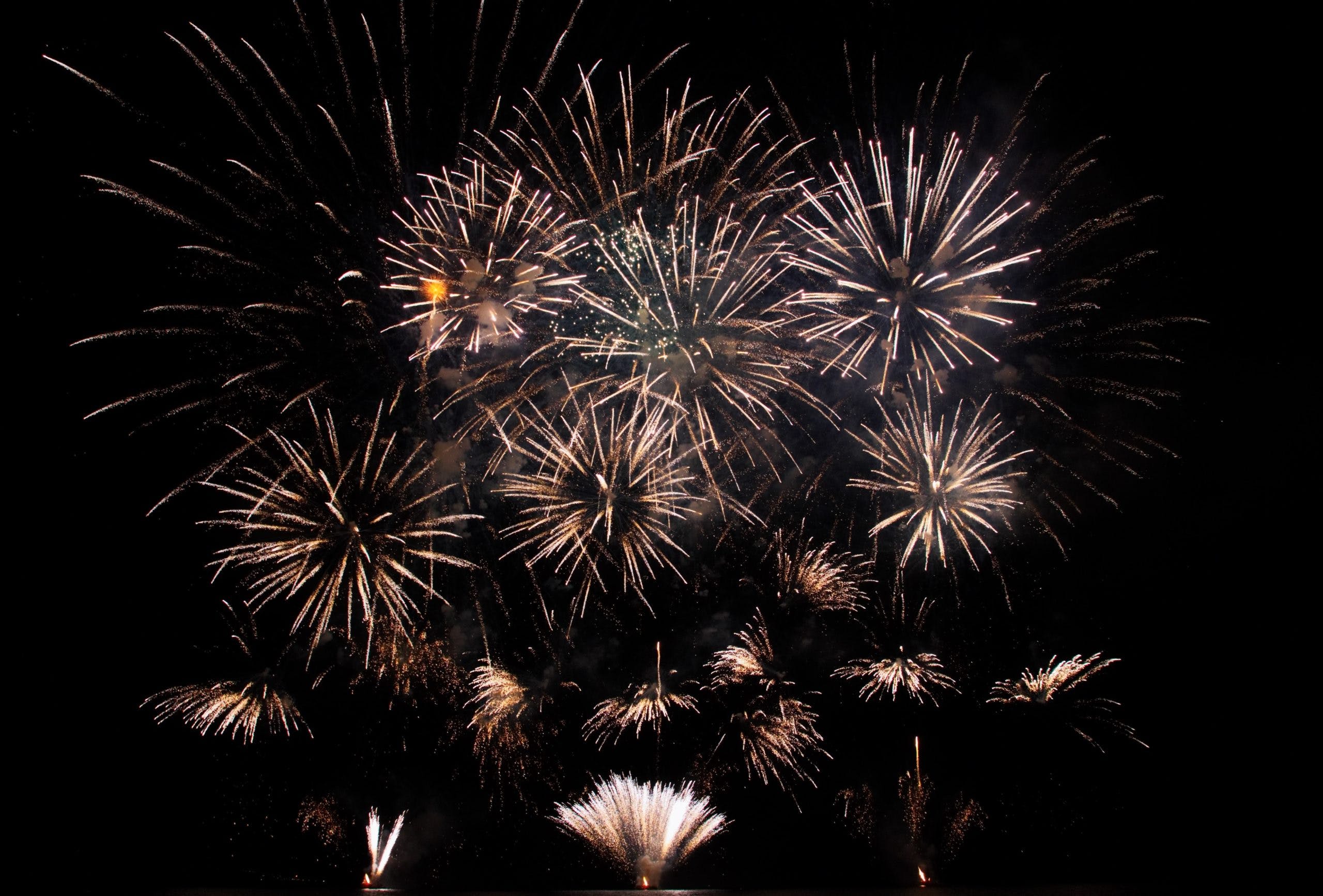 By Woz
26 days ago
New Year’s Resolutions, for the most part, we all have one going into the New Year. How about when it comes to the Edmonton Oilers?! For this article, I gathered a few comments from Oilersnation socials (Facebook, Twitter, and Instagram) Let’s see what resolutions you gave the Oilers!

The first resolution comes from Jan on Facebook. Honestly, the responses on Facebook were really interesting to read through. Jan says the Oilers should focus on the positives and notice a great team developing. Love this from him, can’t agree more. Often than not if you pay too much attention to the negatives then eventually they just keep on growing.

Fantastic comment from Dylan! “Build an actual brotherhood” While I believe that there is a brotherhood with this team, I will agree they need to stand up for each other more. Fighting for each other, fighting for that puck. We need to see more out of that from the Oilers in general, especially after that Mackenzie Weegar hit on Connor McDavid in the last rendition of the Battle of Alberta. Regardless if a hit is clean or not, stand up for your teammates, and your captain. Doesn’t matter who it is. 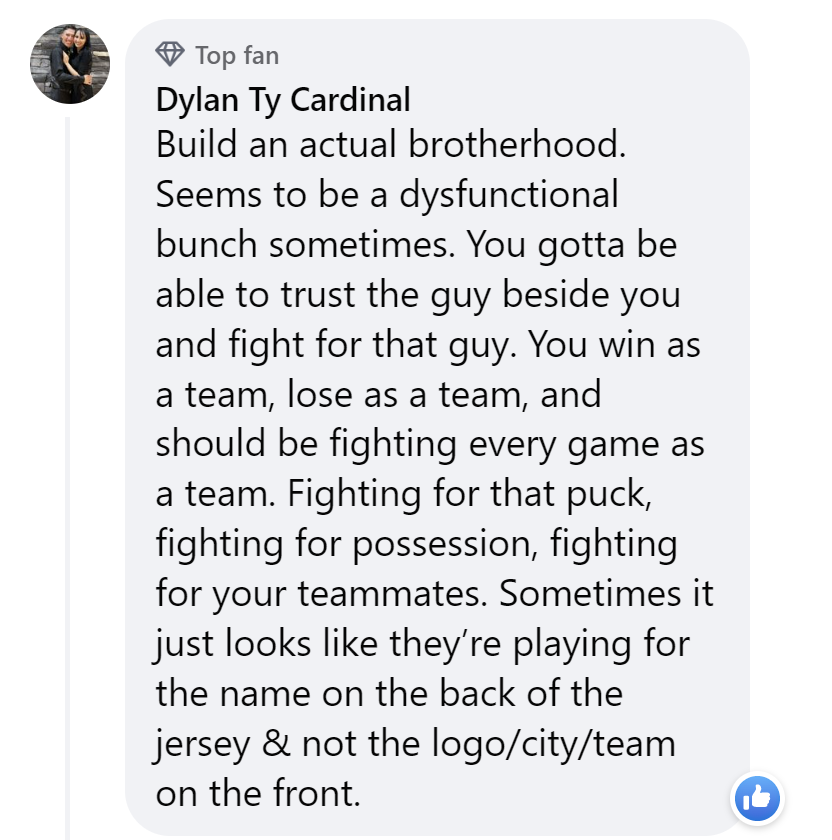 “A solid left D” says Jeff. The name on the market right now seems to be Vladislav Gavrikov. Tyler Yaremchuk has mentioned his name numerous times on Oilersnation Everyday and other podcasts. I like the addition of also improving or playing a more defensive system. The Oilers have been known to be run and gun, heavy offense but lack team defense at times. Now I wonder if that’s a product of the league as a whole becoming more offensive with goalscoring increased. However, it wouldn’t hurt to be more defensively sound. 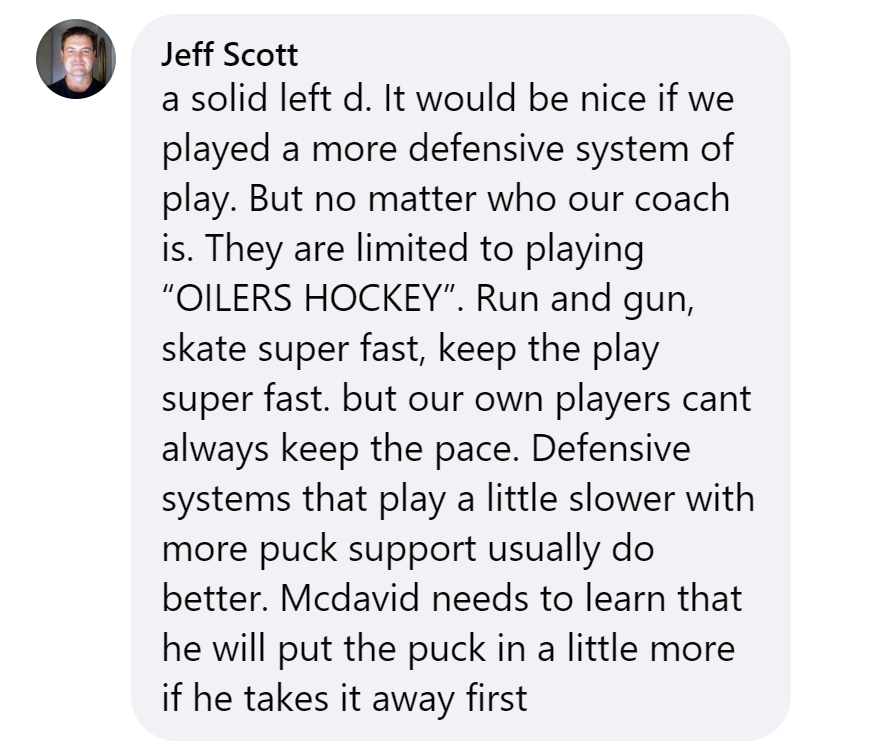 We move over to Twitter now, where we had a response from Flamesnation?! “Stand up for your Captain” and as much as we don’t want to agree with the enemy, they do make a good point! After that Weegar hit on McDavid many Oilers fans were frustrated with the lack of response from the Oilers. It makes you wonder if Evander Kane would’ve done anything but I believe you need more out of everyone in a situation like that.
Adrian wants the Oilers to be better defensively and you can say that a thousand times. That’s a resolution we’d love to witness and see the Oilers stay with that resolution. I especially love the take of taking pressure off number 25. Nurse has been under a massive microscope. If Edmonton can lessen his workload, how beneficial could that be for the blue line and honestly, his confidence and mental health?
Den Polland would love to work as a five-man unit. I can see where he’s coming from, the Oilers need to improve at 5v5 and simply control the game in their favour rather than being passengers on the ride. Add a little bit of consistency in there maybe?!

Craig on Instagram would like the Oilers to have more shots on net. This needs to happen. The Oilers have had a habit of consistently being outshot. With all the firepower, they shouldn’t limit themselves to under 30 shots a game. Make life difficult for the opponent’s goaltender. Now, do we want more shots or quality shots?! I believe that’s why we don’t see a ton of shots from Edmonton as they always look for quality scoring chances.

We can’t forget Jack Campbell. If he can improve and be around a .915% then the Oilers are golden. Who wouldn’t want Soup and Stu to both be hot at the same time?! Leave 2022 behind Jack Campbell and conquer 2023.

My resolution for the Edmonton Oilers is simple. Just stay consistent and get into the playoffs at this rate. Or even better, play a full 60 minutes more consistently! Enough of this win one lose one, or lose two and win one. It’s a headache to deal with as a fan, let’s string together a few more five-game winning streaks! Thank you to everyone who commented and let us know your New Years’ Resolutions for the Edmonton Oilers!
Oilers Talk
Social Corner
Recent articles from Woz