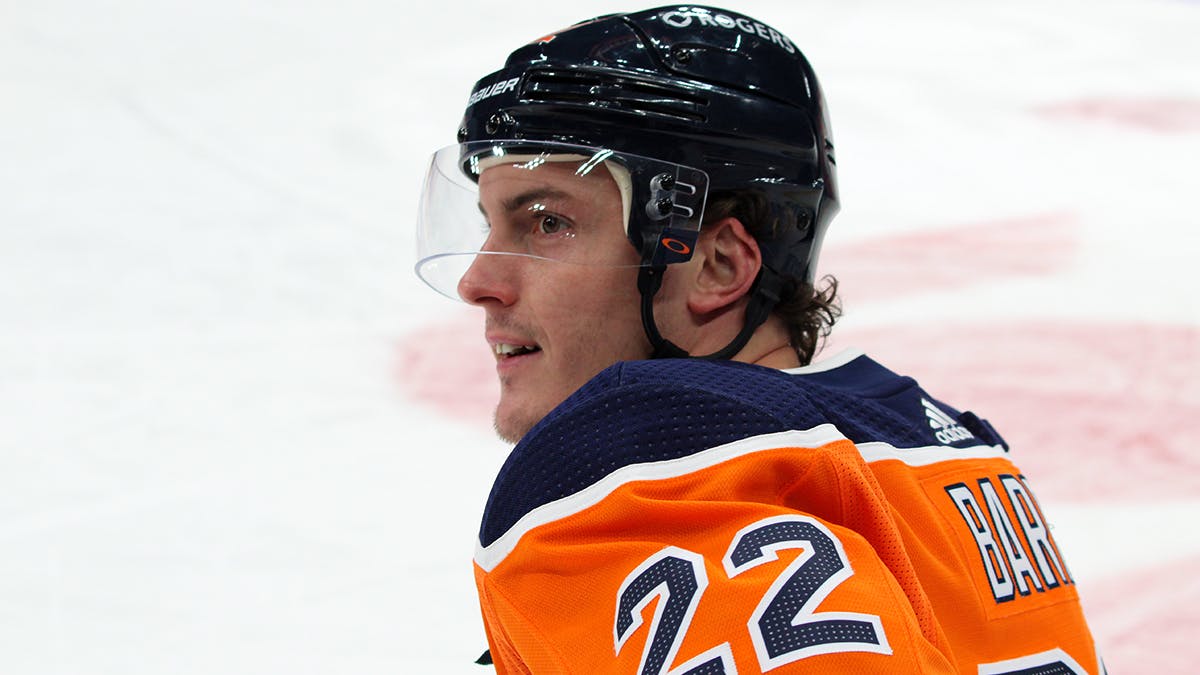 By Zach Laing
1 year ago
Welcome to the 2020-21 season review and 2021-22 season preview player-by-player! In this, and other articles, I’ll be, well, reviewing the Edmonton Oilers 2020-21 season and previewing the 2021-22 season. You can read about the analytics behind my analysis here.
Ah, Tyson Barrie. Easily one of the most enigmatic Oilers players last season.
Drafted in the 3rd round of the 2009 draft, Barrie’s game took some time to develop before he got his first true taste of NHL action in the lockout-shortened 2013 campaign with the Colorado Avalanche. He stuck there for eight seasons, before joining the Leafs in a massive trade in 2019, but he struggled mightily and many questions arose of him.
And last year, he came into Edmonton on a one-year, $3.75-million prove-it deal and had a strong offensive season for the Oilers. He led the league in points by defencemen scoring eight goals and 48 points, but his game still had plenty of warts. So much so, that Norris Trophy voters left him completely off their boards. It marked the first time in the history of the award that the league’s top-scoring rearguard didn’t get a single Norris vote.
So what’s the big deal with his season?
According to hockeyviz.com, his impacts at even-strength are… bad. Offensively he contributes at a one percent rate below league average while defensively, he contributes at a 14 percent rate below league average. A reminder: these isolated impacts account for everything on the ice: his teammates, his competition, and the coaching.
Sure, he’s never been known for stout defensive play, but that split is pretty staggering.
At 5×5, the Oilers controlled 50.1 percent of the shot attempts, 52.43 percent of the goals, and 48.48 percent of the expected goals — this, all the while with an on-ice shooting percentage of 10.13 percent, up roughly two percent from average. Barrie played very high-event hockey last year and these numbers aren’t great in and of themselves.
But how did he score all those points? That’s largely in thanks to the McDavid effect. Of his 40 total assists this season, 27 of them were secondary assists with the large majority of them including another assist, or a goal, from Darnell Nurse, Connor McDavid, or Leon Draisaitl — his three most common linemates at 5×5 by a pretty significant amount.
His 5×5 WOWY numbers show that he was actually a drag on those around him. Here are a few examples looking at those aforementioned three players with and without Barrie on the ice:
Barrie’s largest drag was on McDavid. Edmonton was a much stronger defensive team with McDavid on the ice without Barrie than with Barrie. Barrie didn’t do anything to help McDavid’s offensive game as 97 scored at the same rate without Barrie on the ice.
Barrie helped prop up the offensive games of both Draisaitl and Nurse as their goals for rate with Barrie was significantly higher, but the expected goal numbers were the exact opposite. On top of that, PDO was heavily inflated for both Draisaitl and Nurse with Barrie on the ice. What do we know about these things? Well, it’s that expected goals are a predictor of future goals, and inflated PDO’s don’t last. While the goals were there last year, it’s safe to assume that won’t carry over very well into the future.
So before all you commenters foam at the mouth at me pointing out Barrie’s deficiencies, what’s Barrie good at? Barrie’s strengths are running the powerplay, setting up primary point scorers, transitioning the puck. As a right-shot defenceman who isn’t afraid to shoot the puck, Barrie brought a different dynamic to the Oilers power-play than what’s been there for years.
His ability to move the puck up the ice is valuable, too, as is that shoot-first mentality. There’s no denying his offensive abilities.
He proved it to the Oilers, and they gave him a three-year, $4.5-million deal keeping him locked in as a top-pairing defenceman for the Oilers.
So what can we expect from Barrie this season? As long as he’s stapled to Darnell Nurse and Connor McDavid, much like he was last year, he should have success in putting up points. No matter how they come, those are valuable. He’ll be back on the powerplay, although I wonder if we see some Evan Bouchard there, too.
Expect high-event hockey with him on the ice. Both ways there’s going to be lots of action.