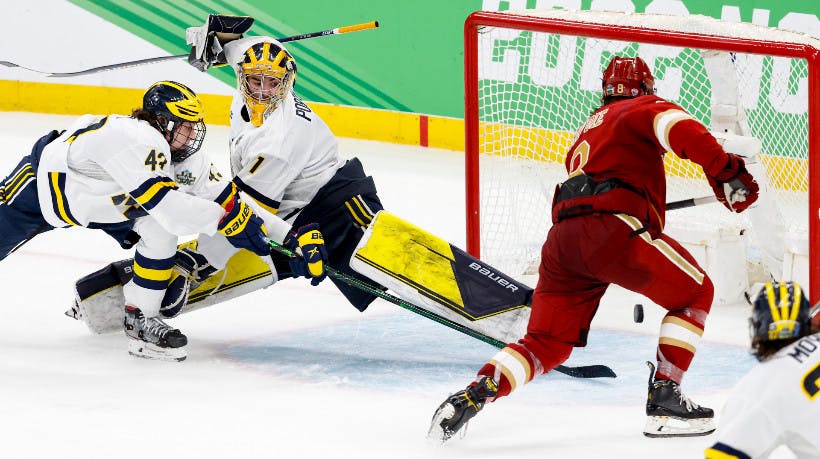 By Liam Horrobin
7 months ago
It’s been an eventful week in the Oilers prospect world.
Ken Holland was busy signing a couple of players, and one college star sent his team to the Championship game.
Before we get into that, in other news, the Bakersfield Condors clinched a playoff spot. However, they had tough breaks losing Raphael Lavoie, Phillip Broberg, and Dmitri Samorukov
Matvey Petrov had another great week scoring four points and helping his team clinch a playoff spot.
Not much other minor news to report this week, and, with that, let’s dive into what else went on this week.

Carter Savoie did it, again!
The Oilers’ prospect scored the game-winner yesterday for the University of Denver in their Frozen Four matchup against the University of Michigan. Michigan was a loaded team this year too, with seven first-round picks in their lineup.
However, that didn’t phase Savoie and his Denver teammates who now moved on to the NCAA Championship game to take on Minnesota State.
This season, Savoie has 23 goals. If he can score one more, he’d be the first Pioneer to score 24 goals in a season since James Patterson in 1999.

Ken Holland locked up his first round pick last Thursday, signing Xavier Bourgault to a three-year entry level deal.
Bourgault went 22nd overall in last year’s draft after the Oilers traded back to select him. He’s had a couple of injuries this season; however, they haven’t affected his stats at all.
In 34 games with the Shawinigan Caterarces (QMJHL), Bourgault has 30 goals and 54 points. Despite missing so many games, he’s still second on the team in scoring.
Fans should likely expect to see Bourgault playing in Bakersfield next season.

Bourgault wasn’t the only player the Oilers signed this week.
They announced the signing of the University of Alberta Golden Bears forward Noah Philp,  on Tuesday. It’s a one-year deal that begins next season; however, Philip joins the Condors right away on an amateur tryout.
Philip was away from the Golden Bears for the first part of the season. Once he returned, he made an immediate impact scoring eight goals and 11 points in eight games. In the postseason, Philip played a big role in their Canada West championship run contributing three goals and ten points.
Before committing to the University of Alberta, Philip spent four years in the WHL with the Kootenay Ice and Seattle Thunderbirds playing in 259 games.
Nation Takes
Oilers Talk
Recent articles from Liam Horrobin