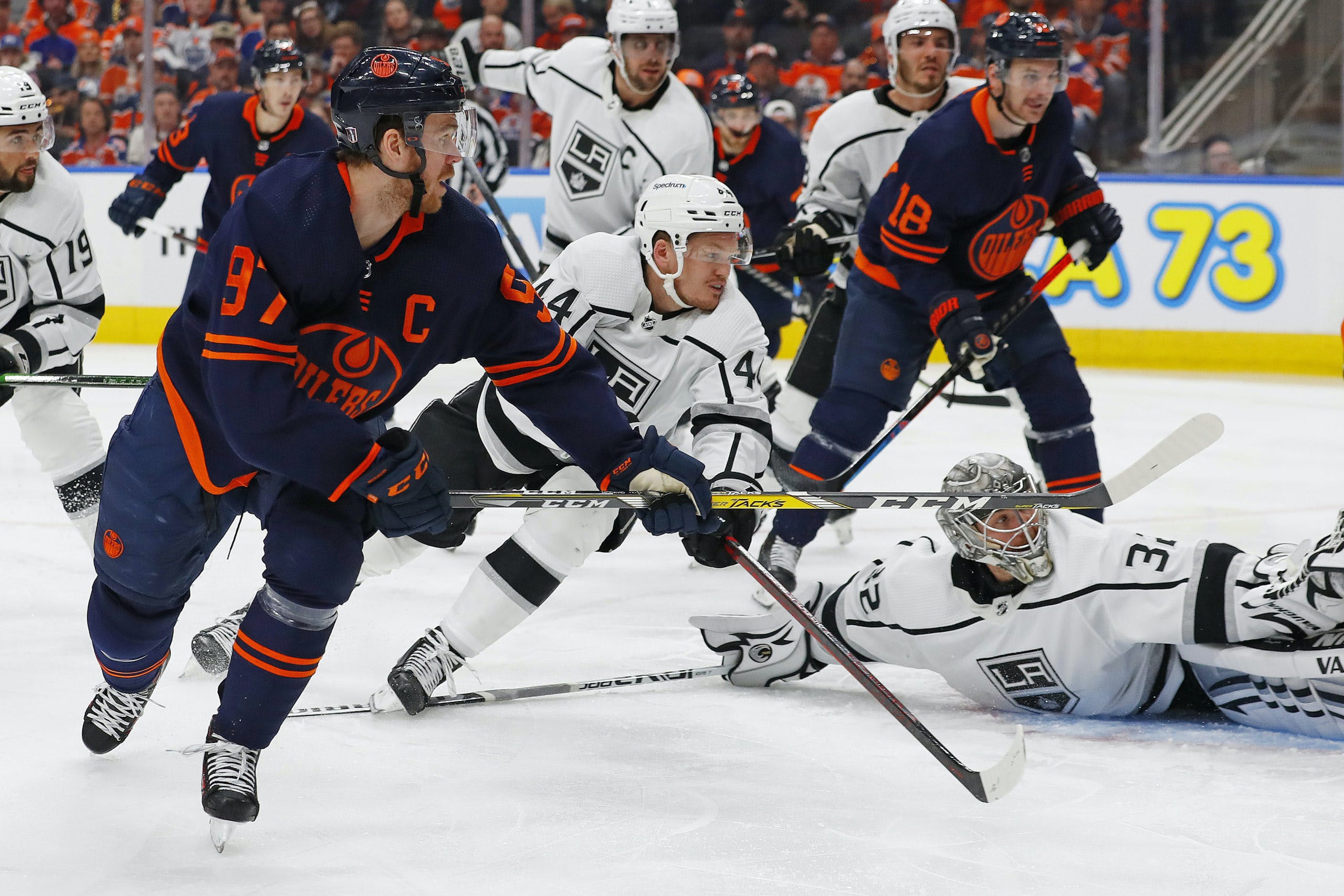 By NHL_Sid
6 months ago
Tonight, the Edmonton Oilers will host the Los Angeles Kings in a do-or-die Game 7 of their first-round 2022 playoff series.
After a disappointing OT loss in Game 5, the Oilers forced a Game 7 with a 4-2 victory on Thursday night.
Here are some of my quick thoughts, as Edmonton looks for their first playoff series win since 2017 against the San Jose Sharks, and their first series win under GM Ken Holland.
*All stats via EvolvingHockey and Natural Stat Trick unless stated otherwise

To start off with the obvious, McDavid was nothing short of absolutely brilliant and phenomenal in Game 6. When the team needed him most, he delivered.
“I can’t say enough about Connor McDavid,” said coach Jay Woodcroft, “his play speaks for itself; he’s otherworldly.”
“He was a leader in us doing what we needed to do in that little bit of the first period.”
Here’s a statistical overview of McDavid’s game on Thursday night, and where he ranked among the team;
An unreal and stellar performance with the season on the line. McDavid played with a variety of different line combinations this game, and posted an xGF% above 55% alongside every forward he shared at least 2 TOI with. Undoubtedly impressive.
Overall in these playoffs, McDavid has twelve points in six games, alongside a 69% goal differential, and a 68% expected goal differential, ranking near the top of the league in each facet.
McDavid has been excellent defensively as well, and is dispelling the narrative that he’s “one-dimensional.” The team allows fewer goals and scoring chances with McDavid on-ice, both in the regular season and the playoffs, and he’s much more involved with puck battles deep in the DZ. During these playoffs, McDavid has also begun getting involved physically.
“‘He sets the tone for us again early. You can see the battle level, he’s involved in every battle, he’s up on every check,” said Tyson Barrie. “He’s doing everything right, and you can just tell how bad he wants this.”

A potential injury for @Jesse Puljujarvi?

One of the most frequently debated topics among the Oilers fanbase and media is Jesse Puljujarvi, and the value he provides.
Puljujarvi’s TOI has seen a considerable decrease in the playoffs. In this series, he’s averaged merely 9:55 TOI per game, a considerable drop from his regular-season average of 16:22.
I highly suspect that Puljujarvi is playing with some sort of injury. His average shift length was merely 26 seconds in Game 6, and it seems incredibly odd to go from Connor McDavid’s primary right-wing, to not even averaging 10 minutes per game. He didn’t play a single shift in the 3rd period of Game 5 either.
In spite of this, Puljujarvi’s numbers remain strong. He ranks 4th on the team in 5v5 xGF%, and his actual goal differential is still at a fine rate of 56%.  His skating noticeably looks off, and he isn’t as aggressive of a forechecker as he was in the regular season. I suspect some sort of lower-body / leg issue, but I still observe him winning puck battles in the DZ, forcing turnovers, and efficiently exiting the zone.
Even from a production standpoint, Puljujarvi is tied alongside Draisaitl and Hyman in 5v5 playoff points (2), and ahead of Yamamoto (0), in spite of low playing time and a potential injury. I still believe Puljuarvi is a top-five forward on this team, at worst. I hope his limited deployment isn’t due to a lack of trust by Woodcroft, and hopefully, he can become healthy soon if he’s sustained some sort of injury.

Keeping and limiting shots to the outside 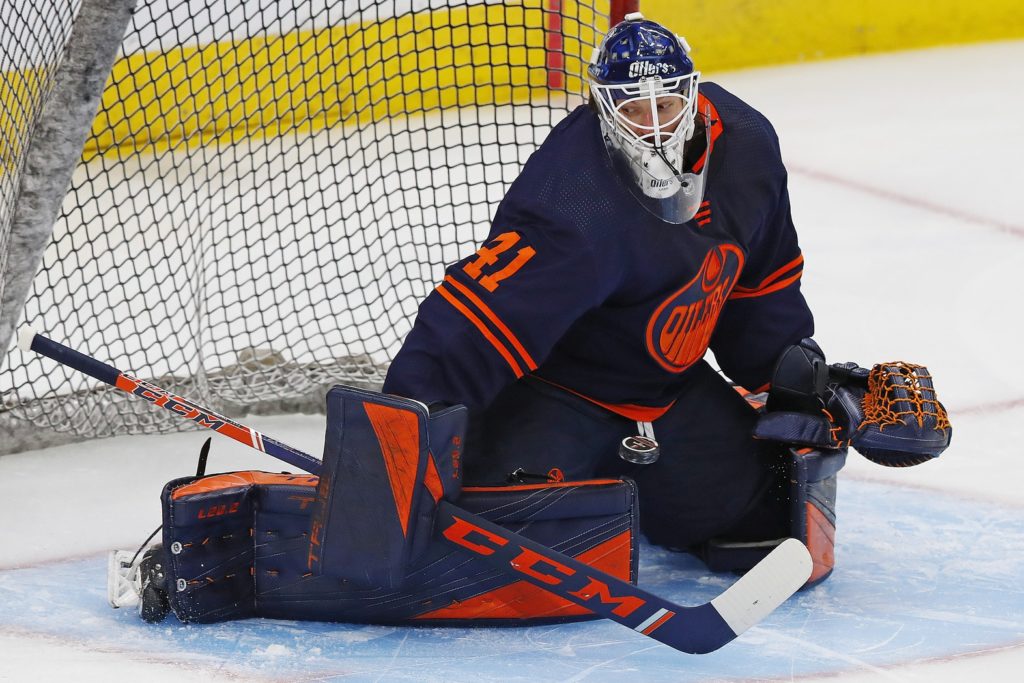 May 2, 2022; Edmonton, Alberta, CAN; Edmonton Oilers goaltender Mike Smith (41) makes a save during warmup against the Los Angeles Kings in game one of the first round of the 2022 Stanley Cup Playoffs at Rogers Place. Mandatory Credit: Perry Nelson-USA TODAY Sports
About two weeks ago, I took a deep dive into the Los Angeles Kings, and their play-style. One noteworthy aspect of their game is their excessive rate of low-quality shots from the outside.
Los Angeles ranked 6th in the league in EV shot attempts in the regular season, but 21st in EV Goals, and 20th in average shot quality per shot attempt. They’re superb at generating chances off the rush, but their in-zone offensive system is much more reliant on outside/point shots, rather than the slot/house area. This is a frequent trend for teams coached by Todd McLellan, and it was evident in Games 3 and 6.
In Game 6, the shot attempts were fairly even, as they were 64 – 62 in favour of Edmonton, but Edmonton had a more lopsided high danger chance differential of 58%.
It’s more impressive upon considering that these raw metrics aren’t adjusted for score effects, as Edmonton’s score and venue adjusted HDCF% was at 67%. Additionally, Los Angeles had five power plays, while Edmonton had just one (which is certainly undeserved in my humble opinion), so a 58 HDCF% at all-strengths is impressive.
It’s a challenging task to shut down LA’s excellent transitional system, especially with the current defensive core. Consequently, the primary key to suppressing their offence is to protect the slot and force them to shoot from the outside. They were quite poor at doing so in Game 5, as Los Angeles generated a plethora of high-quality chances off the rush and off of in-zone play, but Edmonton’s slot coverage was a key component of their victory on Thursday night. This must continue in Game 7.

The inconsistency of the Keith/Bouchard duo

The performance of Edmonton’s 2nd pair of Keith/Bouchard has been quite interesting thus far.
In Edmonton’s Game 1 loss, the pair’s possession stats were decent (55 CF%), but high-danger chances were 2 – 6 in favour of Los Angeles with that duo on-ice.
They rebounded the following two games in Edmonton’s blowout victories, with a 61% shot attempt share, 63% expected goal share, and a 100% (!!) goal and high danger chance differential. Of course, the entire team was excellent in those games, but that pair certainly played a considerable role.
However, they struggled in Game 4, and were exceptionally poor in Game 5. Bouchard was on-ice for two goals against, Keith was on-ice for three goals against, and they posted a dreadful xGF% of 31% together in G5.
In the regular season, Los Angeles ranked 2nd in the league in Controlled Zone Entries, 2nd in Successful Zone Exits, and 5th in Entries with Chances. As mentioned previously, they’re a marvellous team at generating offence off of transitional and neutral zone play.
Here’s a glance at how well Keith and Bouchard defend the entry. 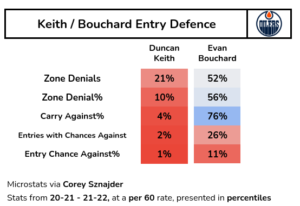 Bouchard’s results are fascinating; he does a fine job at preventing controlled entries against, and is above-average at denying the blue-line, but he’s prone to allowing a high amount of rush chances against. Meanwhile, Keith is likely a bottom-five defenceman in the league at defending the rush, in regards to both denying the blue-line and preventing rush chances against.
Keith still remains an intelligent player in my opinion. Barring those occasional turnovers and errors, he’s typically OK in the DZ, but his rapidly declining foot speed causes him to be consistently burned off the rush. Bouchard’s Denials and Carry Against% is certainly not enough to make up for it.
They rebounded once again on Thursday night, and were fine defensively, but they’ll need to maintain this performance into Game 7. 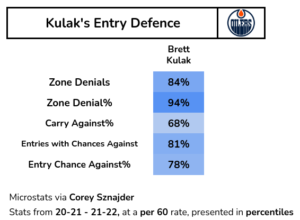 What a fresh breath of air.
Kulak’s most valuable facets are his smooth skating abilities and his entry defence. He consistently steps up at the blue-line at an exceedingly high rate, and also excels at suppressing rush chances.
After Nurse was suspended one game for headbutting, Kulak was deployed as the 1LD in his absence in Game 6, and he certainly rose to the occasion with a splendid performance.
Kulak finished 2nd among defencemen in TOI, at 21:19. With Kulak on-ice at 5v5, scoring chances were 15 – 8 in favour of Edmonton, and high danger chances were 7 – 3. By my eye, he was aggressive at the blue-line all game long, including one notable zone denial mid-way through the first period. He and Ceci were a very reliable pair, and if it wasn’t for the fact that Nurse’s best defensive results come alongside Ceci, I would have liked to see more of the Kulak – Ceci duo.
In this series, Kulak leads all Oilers D-men in xGF%, at 57%, and it isn’t too shocking either; he’s an excellent fit against Los Angeles’ transition-heavy system from a defensive standpoint.
The Oilers should strongly consider extending him this off-season, and he should be relatively cheap.

It seems like Draisaitl has been hampered with some sort of injury for a while now. It got worse in Game 6, with a cheap play by Mikey Anderson (seems like a slew-foot in my eyes) that resulted in Draisaitl temporarily heading to the dressing room, but he did return. He wound up having the primary helper on the eventual game-winning goal by Tyson Barrie.
His line has mightily struggled at 5v5. Los Angeles has out-scored the opposition 3 – 7 at 5v5 with Draisaitl on-ice, and his xGF% is merely at 43%. His metrics without McDavid are even worse, and besides Game 2, Danault’s line has crushed his line at 5v5.
It’s just not the play we’ve expected from him, but of course, it’s evident that he isn’t 100% healthy. He obviously has some sort of ankle/leg issue, and Mark Spector also mentioned after that game that he might be dealing with a back problem as well. Hopefully, he recovers soon, as Edmonton will undoubtedly need him to.
I thought he was especially poor in Game 5, and yet he still ended that game with two goals and an assist.
One thing I’ve come to love about Draisaitl is that even when he does struggle, he always seems to finish the night with a couple of points on the scoresheet, and it’s an indicator of just how talented he truly is.
“That’s what he does, he makes those plays in his sleep,” said Barrie. “He’s a talented guy, and one of the best passers you’ll ever see.”
“He’s a warrior,” said Woodcroft. “I don’t worry about him.”

It doesn’t need to be said, but tonight is an absolute must-win

I’ve mentioned this numerous times in prior articles, but this is the seventh year that the Oilers have had Connor McDavid on their roster. It’s the eighth year they’ve had Leon Draisaitl. Draisaitl will turn 27 in a couple of months, while McDavid turns 26 in less than a year.
With LA’s top defencemen (Drew Doughty) out of their lineup, alongside another top-six forward (Viktor Arvidsson), this is a series that Edmonton just can’t lose. Three first-round exits to teams considered the underdog in three consecutive years, would be unacceptable. I would predict that an Oilers loss tonight would result in major organizational changes.
Consequently, I think it’s fair to set the bar for success very high, especially considering their immense lack of success in the past decade.
Furthermore, the objective this season shouldn’t be merely making the playoffs or winning just one round, as they almost feel like false accomplishments in the grand scheme of things; the primary goal should be the Stanley Cup.
In several years, most people won’t look back at the 2021-22 campaign with satisfaction that Connor McDavid and the Oilers won a first-round series against a 99 point team. However, they certainly will appreciate this roster if they make a deep playoff run into the finals, and potentially win the cup.
I expect Rogers Place to be electric tonight, and hopefully, the urgency is high for the Edmonton Oilers.
It has to be.
Find me on Twitter (@NHL_Sid) 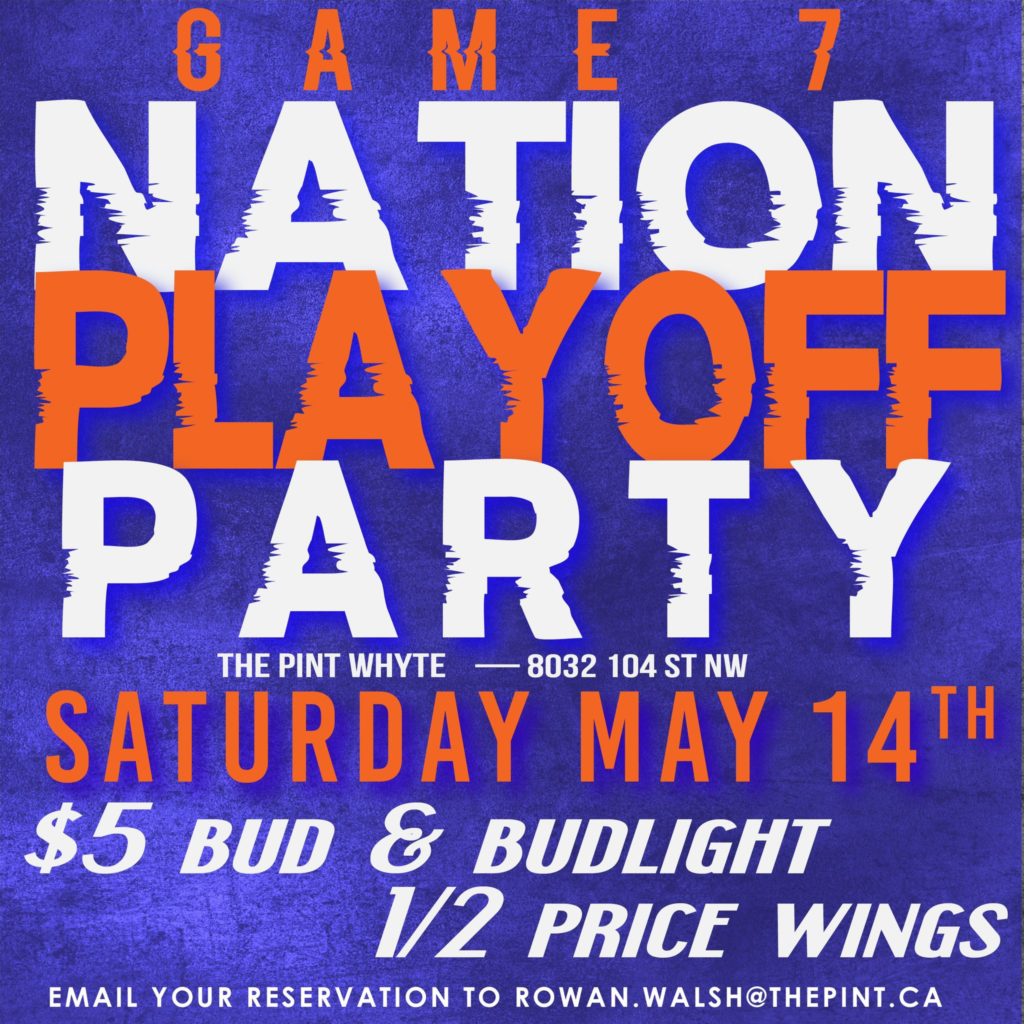