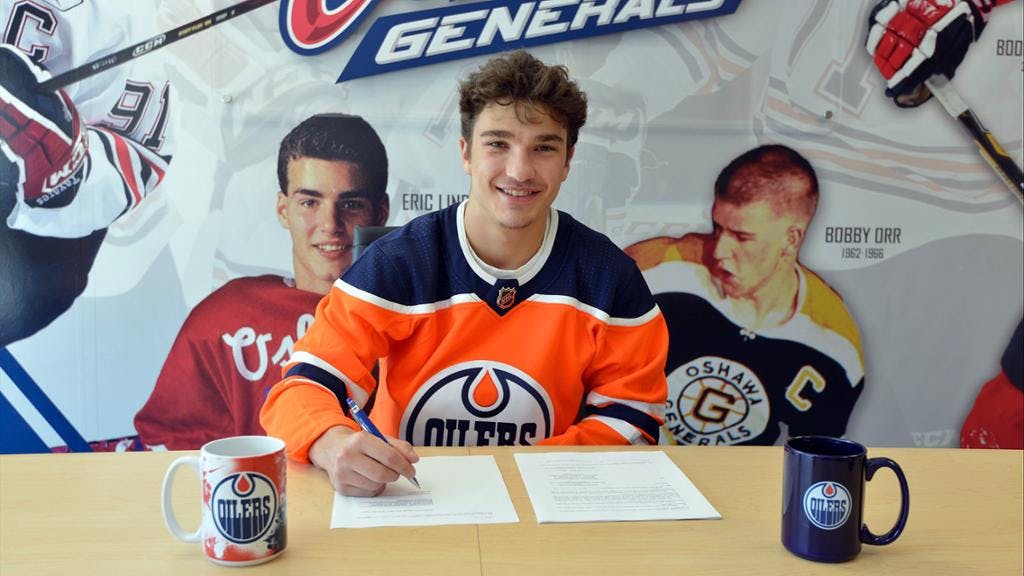 By Zach Laing
1 year ago
The Edmonton Oilers have signed forward Tyler Tullio to an entry-level contract, the club announced Monday.
Tullio, 19, was drafted by the Oilers in the 5th round of the 2020 draft. He’s spent two years playing for the Generals where in 102 games he’s scored 42 goals and 108 points.
With the OHL not playing a season last year due to the pandemic, the 5’11”, 181-pound forward spent the season playing for HK 32 Liptovsky Mikulas of the Slovakia league where he scored four goals and 13 points in 19 games played.
When he came back to North America, he spent time with the AHL’s Bakersfield Condors on an amateur tryout.
Just last week he was named captain of the OHL’s Oshawa Generals and was ranked the 14th best Oilers prospect by OilersNation.
According to PuckPedia, Tullio will earn a $750,000 salary in the NHL and a $75,000 salary in the AHL in year one of the deal that also includes an $85,000 signing bonus, and a $15,000 games played bonus.
In years two and three, the salary and signing bonus stays the same.
Zach Laing is the Nation Network’s news director and senior columnist. He can be followed on Twitter at @zjlaing, or reached by email at zach@oilersnation.com.
Nation Takes
News
Oilers Talk
Recent articles from Zach Laing