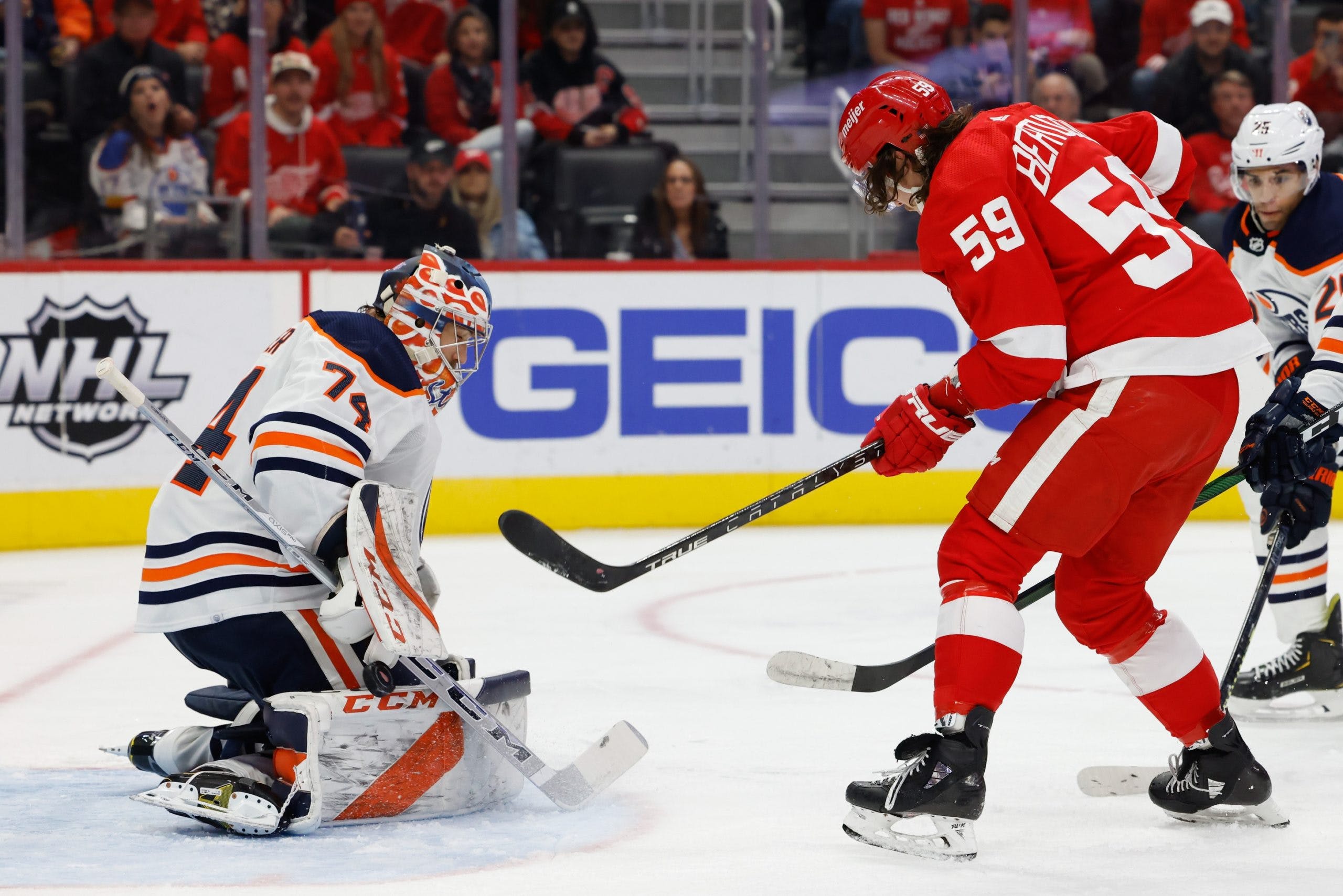 By Robin Brownlee
1 year ago
Playing from behind is more often than not a loser’s game even with the best two players in the NHL in your line-up and a power play that’s scoring goals at a historic clip. Even so, the Edmonton Oilers thought they’d give it a go against the Detroit Red Wings to open a five-game road trip Tuesday.
Fresh from running their record to 9-1-0 at home Friday, spotting the New York Rangers a 4-1 lead, then roaring back for a 6-5 OT decision on the goal of the year by Connor McDavid and Leon Draisaitl’s winner on a night the team retired Kevin Lowe’s No. 4, the Oilers trotted out an ill-advised encore in the Motor City.
Outplayed and outshot early, the Oilers played catch-up again, this time falling behind 3-0 in a 4-2 loss on a night they stood around far too often in the opening 40 minutes. In the process, they wasted a really good start by Stuart Skinner — save for his ham-handed handling of the puck on the 3-0 goal — and stumbled into this five-game swing that continues Thursday in Boston.
While none of the above qualifies as any kind of news flash to anybody paying attention, coach Dave Tippett thought it was worth a mention before jumping a jet to Beantown. Some nights, even the likes of McDavid, Draisaitl and a smoking-hot power play can’t mitigate a three-goal deficit. This was one of them. 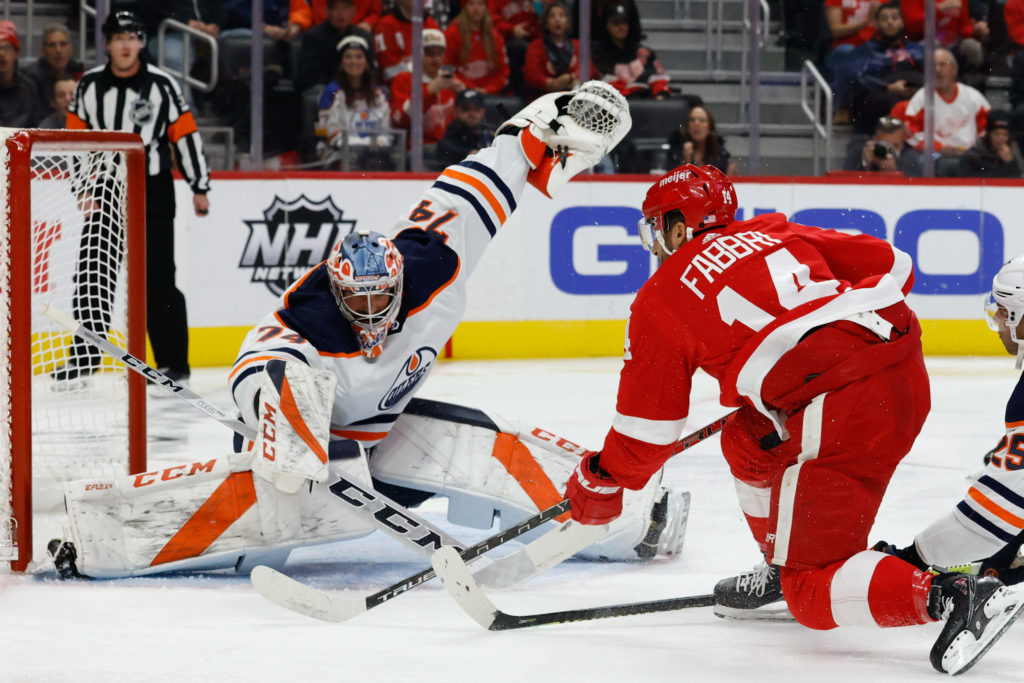 Nov 9, 2021; Detroit, Michigan, USA; Edmonton Oilers goaltender Stuart Skinner (74) makes a save
on Detroit Red Wings center Robby Fabbri (14) in the second period at Little Caesars Arena. Mandatory Credit: Rick Osentoski-USA TODAY Sports
“He gave us a chance to win,” Tippett said of Skinner, who stopped 35 of 38 shots. “He made enough saves to give us a chance to win . . . we just didn’t play well enough. Not enough urgency. Not enough execution. They came out and played a desperate first period and we didn’t match that level and we got behind.”
For a guy who sat around for seven games after being recalled from Bakersfield Oct. 20, Skinner looked very sharp early, but he didn’t get much help. When Vladislav Namestnikov made it 2-0 for the Red Wings early in the second period, the shots were 23-9. The lone hiccup from Skinner, making just his second NHL start, came when he fumbled the puck behind the net on the 3-0 goal by Dylan Larkin.
“Honestly, I just fanned on it,” said Skinner, whose only previous start with the Oilers came last season after another long stretch playing behind Mikko Koskinen with Mike Smith injured.  “Hard fan, bad timing . . . it happens. Move forward and make sure it doesn’t happen again.
“Believe it or not, I’ve made a worse play before in my career and we ended up winning the game. I just looked back to that, and there’s always a chance to come back in a game. We almost got it.”
When Jesse Puljujarvi cut it to 3-1 late in the second period and McDavid made it 3-2 just 38 seconds into the third, the response by many on Twitter, me included, was “game on.” Why not a repeat of what we saw against the Rangers? Well, no. Skinner shut the door the rest of the way, keeping the Oilers’ power play off the board (0-for-2) for the first time this season.
“I didn’t love it. I didn’t love the start,” said McDavid, whose goal gives him points (9-14-23) in all 11 games this season. “We dug ourselves a hole again. I liked our response. I liked our third period. We definitely had enough chances top tie the game, but you can’t keep digging yourself that type of hole.”
Duly noted. Again.