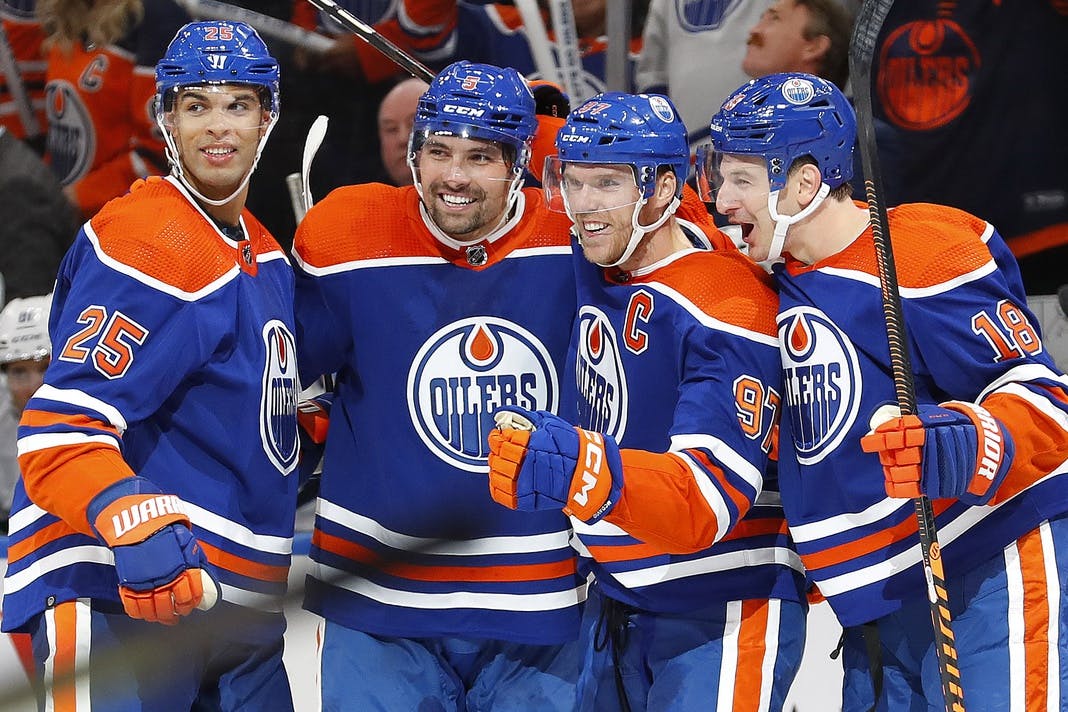 By baggedmilk
1 month ago
82-0 here we come! Final Score: 5-3 Oilers
I love opening night of a new NHL season. No matter what happened the year before, the first game of a new campaign gives us all a dose of hope that this will be the year that our favourite team finally has what it takes to win the Stanley Cup. And after drinking the sweet, sweet pre-season Kool-Aid for months on end, it was finally go-time on a very important season for the Edmonton Oilers. So when the boys kicked things off by allowing two goals on the first four shots, it was not quite what I had in mind for the first few minutes of this hockey game but, at the same time, it oddly felt like home. How many times have we watched the Oilers fall behind by a pair in the opening minutes before rallying with a comeback in the back half of the game? Can an Oilers season even really begin without this kind of shitacular start? I might be onto something here.
In a hole and backing themselves into a corner, the Oilers had plenty of work to do to get back in this game and it was going to take a much higher level of execution and effort if they were going to get the job done. So when the Canucks added a third straight goal to start off the second period, a lot of us were wondering what it was going to take for the Oilers to wake up and get their legs moving. Then, just when I was ready to check for a pulse, the boys got themselves on the board with a controversial power play goal (sorry, Quinn) by Leon Draisaitl and the tides began to turn. From there, Edmonton took over the play and started generating chances at the rate we were expecting from the jump, and when that started to happen, the Canucks found themselves in a world of trouble. By the time Darnell Nurse scored to tie the game at three apiece in the dying seconds of the frame, Vancouver was lucky to have the buzzer go because they could have easily found themselves down if the Oilers had another few minutes.
Heading into the third period with the score knotted at three, the Oilers had a very good chance to steal a win provided that they could stay out of the damned penalty box. Yeah, the PK had been pretty good all night but having to rely on it this much was not part of the plan. I don’t know what their deal was or why the boys were feeling so generous, but the endless supply of Vancouver power plays definitely had to stop. And even though you’d think that plan would be simple enough, the Oilers just could not stop taking penalties. It doesn’t take a rocket surgeon to figure out that being shorthanded for almost an entire period makes it pretty tough to win hockey games, and the fact that the Oilers had a chance to win this game despite their lack of discipline was almost incredible. The fact that they won the game is a miracle.
The wrap. 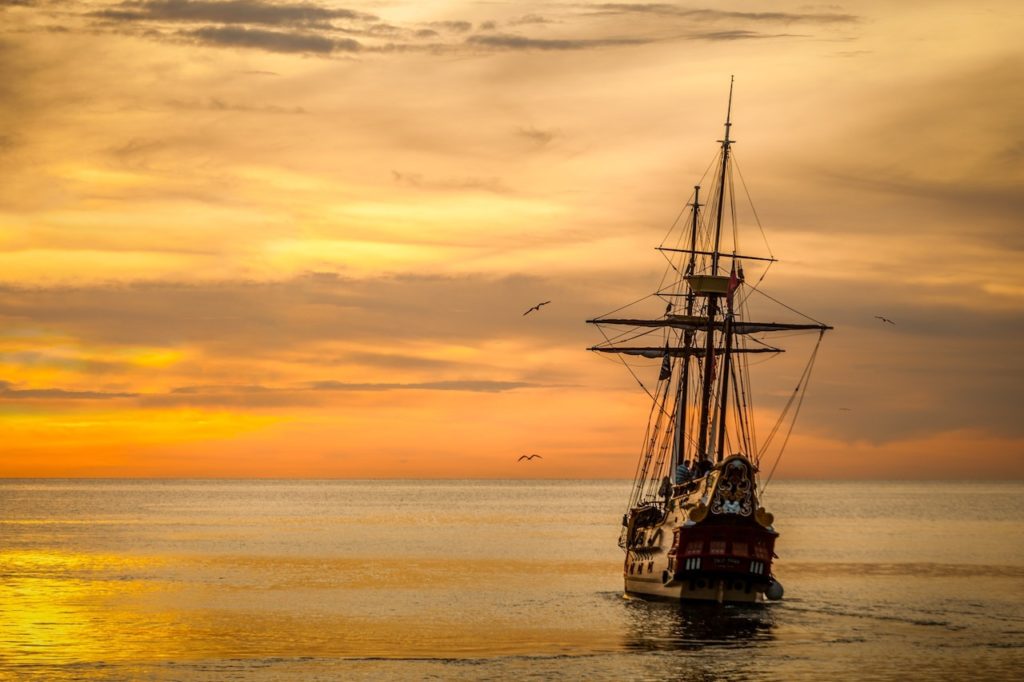 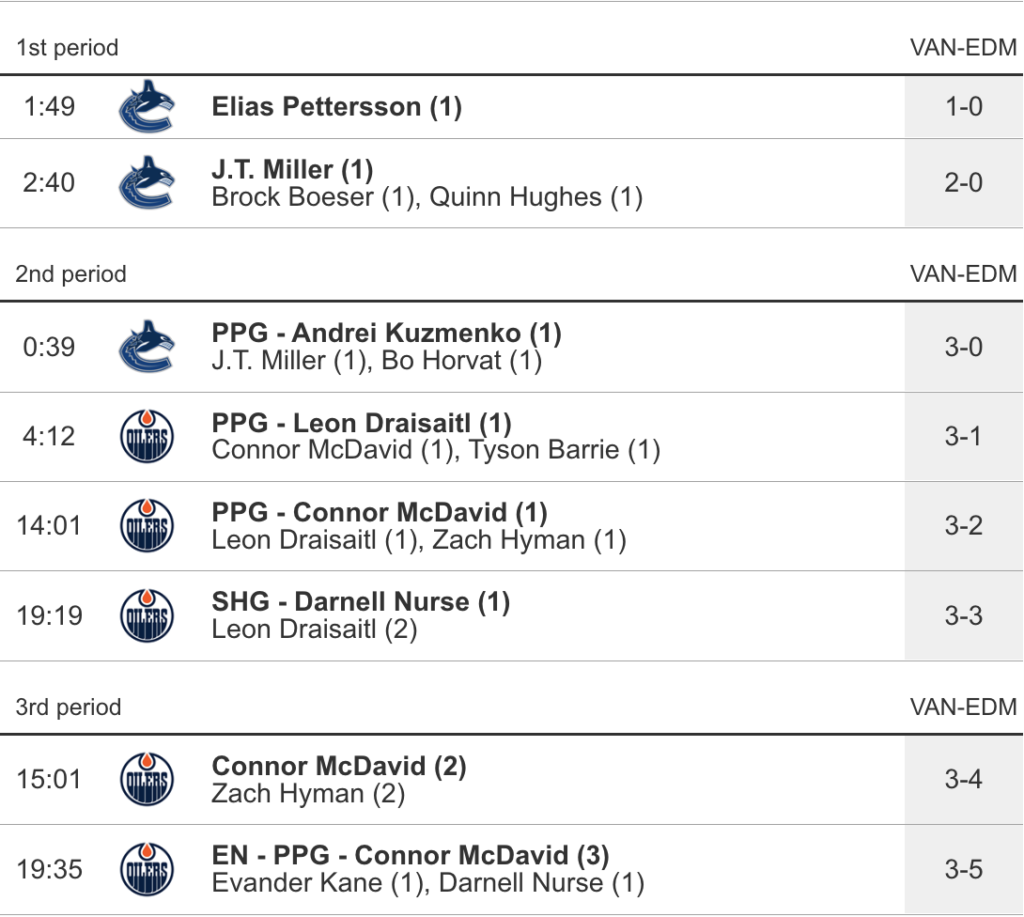 For the first time in three seasons, we’re throwing a Season Launch Party at SOHO and you’re all invited to join us! What’s going on? I’m glad you asked.
As always, we will also be including a charity component with the event where a portion of all ticket sales will be donated directly to Sport Central to help with their mission of providing equipment and bicycles to children in need.
Featured
Oilers Talk
Post Game
Recent articles from baggedmilk