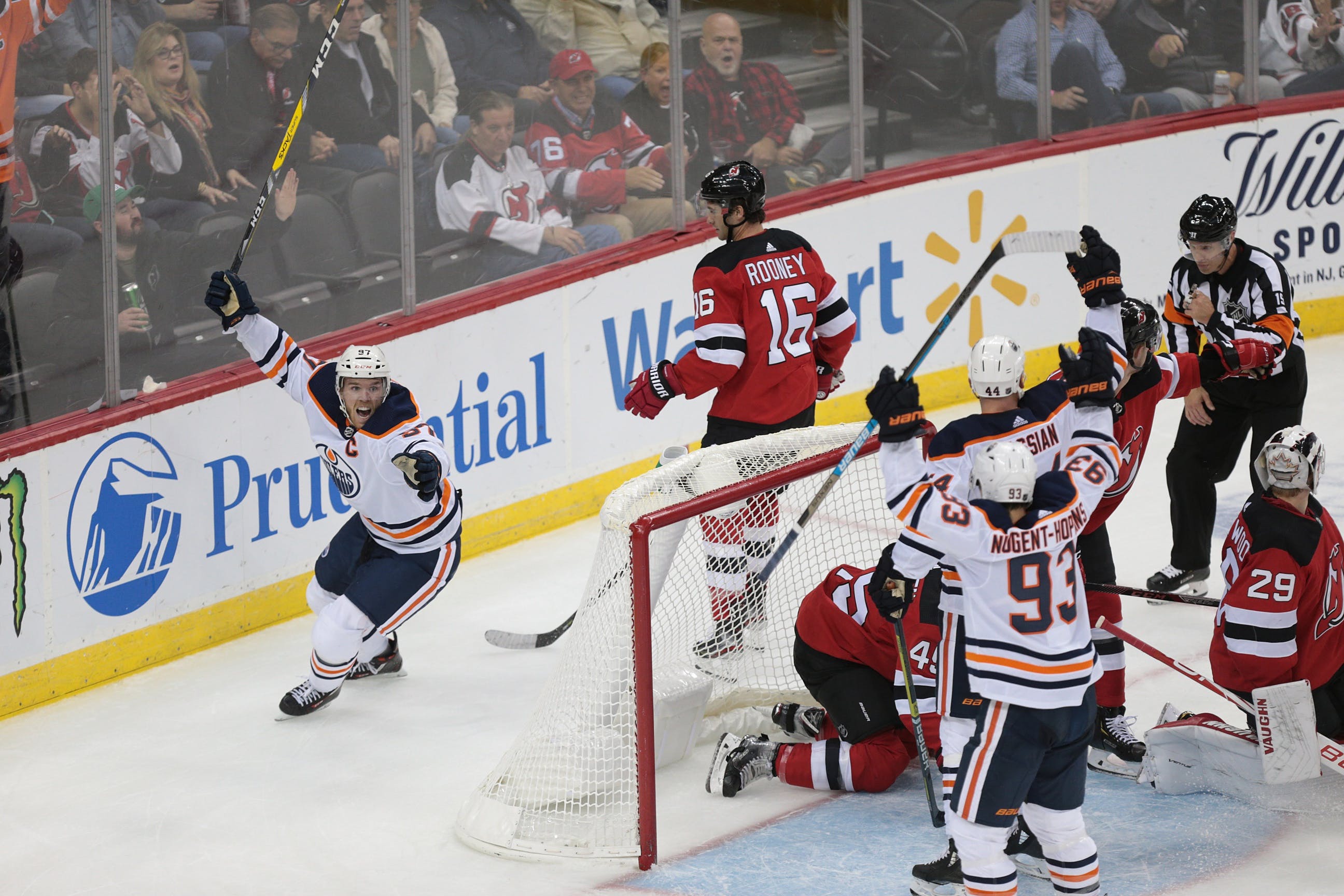 By baggedmilk
3 months ago
Two winning streaks coming in, two teams that can score, and I’m not sure anyone would have expected that a November date between the Oilers and Devils could be so exciting.
Welcome to our game day content brought to you by NHL Odds site Betway!
On Monday night, the Edmonton Oilers steamrolled through the Nashville Predators like they were nothing. Yeah, there were mistakes and lessons to be learned — the PK has allowed goals in nine of 10 games — but overall, it was the Oilers’ best 60-minute effort by a longshot. Right from the jump, everyone was on the same page. It was the kind of game that had us all feeling like this team is really moving in the right direction, and it’s been fun to watch the Oilers put their game together after spinning their wheels a little bit early on. And what I love most about this winning streak is that the boys won five straight games in five different ways, and I think working that adaptability muscle will pay dividends down the line when the stakes go up. Even tonight against the Devils, the Oilers are facing a flavour of opponent that they haven’t seen yet this year, and I’m eager to see how they handle another new challenge from a young New Jersey group that will surely be a handful.
Winners of their last four games, the New Jersey Devils are not only beating teams but they’re doing it in style. Over this win streak, the Devils have outscored their opponents by a 19-5 margin with all but one of those wins — a 1-0 victory over the Colorado Avalanche — being by three goals or more. Right now this is a team that’s pumping pucks into the net and if the Oilers are going to be the ones extending their winning streak, they’re going to have to find a way of shutting the Devils down offensively. That means the number of giveaways has to come down, there can’t be any freebies in the slot, the goaltending has to be strong, and if I’m being greedy, the Oilers can’t be too cute with the puck or risk having it go back the other way and end up in the back of their net. At the other end of the ice, New Jersey is allowing an average of only 21.8 shots against per game. While they haven’t faced McDavid and Draisaitl yet, the Oilers will still need to take advantage of the opportunities they do get because there may not be a lot of them.
Let’s see what the numbers say.

Nugent-Hopkins – McDavid – Hyman
Kane – Draisaitl – Yamamoto
Foegele – McLeod – Puljujarvi
Holloway – Shore – Ryan
Nurse – Ceci
Kulak – Bouchard
Niemelainen – Barrie
Skinner
While I absolutely believe that the Oilers are starting to gel in the way we hoped they would, this New Jersey team is going to be a real challenge for a team that has bled offensive chances at times over the first 10 games. If the boys are going to be the ones to extend their winning streak then they’ll have to avoid giving the Devils any additional chances that they won’t already create for themselves. The Oilers will probably need to play a simpler game without trying to force passes through or get too cute offensively. If they can do that, we’ll be fine. If not, we could end up as another victim on the growing list of teams that the Devils are embarrassing lately.

Tatar – Hischier – Zetterlund
Haula – Hughes – Bratt
Sharangovich – Mercer – Boqvist
Wood – McLeod – Bastian
Siegenthaler – Hamilton
Graves – Marino
Smith – Severson
Blackwood
The first thing that comes to mind when I look at the Devils’ lineup is that they’re young and don’t have anything to lose, and that can be a dangerous opponent when they’re feeling good and having some success. Even though we’re still in the early days, the Devils are showing themselves to be a legitimate threat in the east and what will be most interesting is seeing if they can keep it going through the inevitable ebbs and flows that come in an 82-game campaign.

From All About the Jersey:

(Yesterday), the New Jersey Devils announced that Ondrej Palat underwent groin surgery, and that a timeline for recovery would “be provided as it becomes available.” Presumably, Ondrej Palat will be placed on Long-Term Injured Reserve, allowing Andreas Johnsson to stay on the roster – at least until Jonathan Bernier is ready to come off of LTIR. You can read more about Palat’s situation and the effects on the team here.
Nico Hischier became the first on the Devils to reach the 5-goal mark for the team this season with his first period power play goal. Reaching this mark in just nine games played and 10 team games, I hope this is a sign of a broader goal scoring breakout year for Nico Hischier. I also hope that he did not injure his leg in the third period. With the Devils’ centers scoring four of the five goals tonight, this team continues to thrive under the recent leadership-by-example from Nico. Hughes and Mercer had great nights as well, and I look at this game, yet again, as a template for winning. 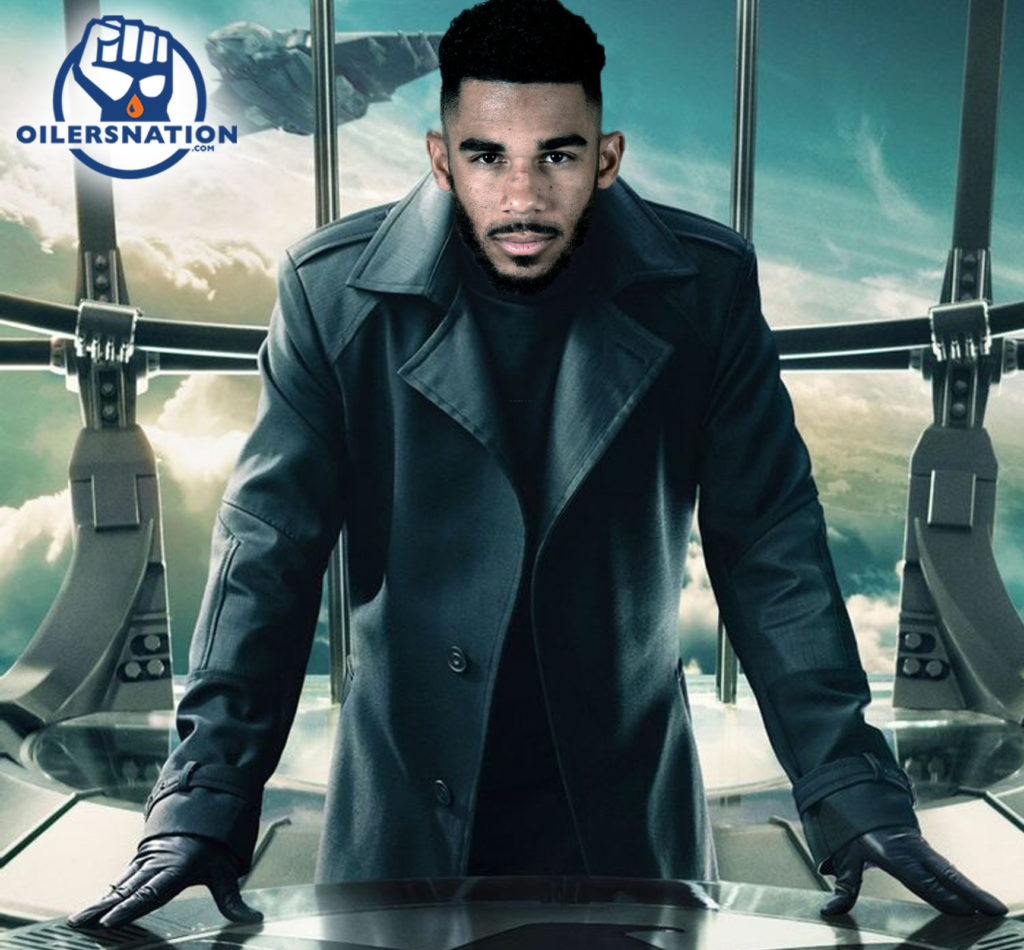 Photoshop: Tom Kostiuk
Game Day Prediction: The Oilers come up with a big 4-2 win for Smytty and Lee Fogolin’s hall of fame night.
Obvious Game Day Prediction: Gene treats us to a wonderful intermission piece on the McLeod brothers and how their parents switch hats and jerseys in the intermission to ensure fairness. Oh, and I’ll also add another point for McDavid and Draisaitl too.
Not-So-Obvious Game Day Prediction: The Oilers’ PK shuts the Devils out, making it the second time in 11 games that the penalty kill has been perfect.
Editorials
Featured
Gameday Previews
Oilers Talk
Recent articles from baggedmilk