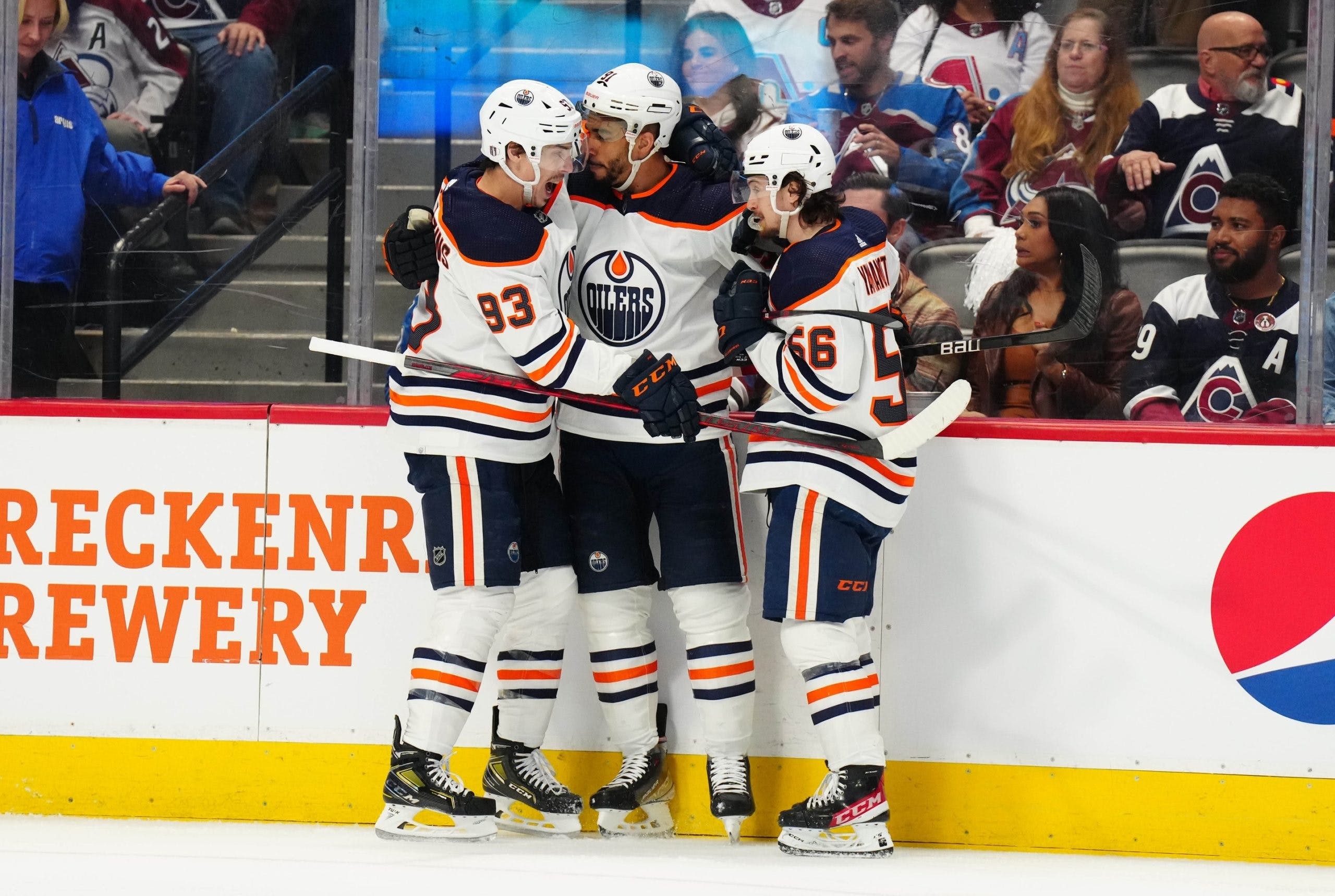 By Jason Gregor
8 months ago
Colorado starting goaltender Darcy Kuemper will not play tonight. He left game one, reportedly due to blurred vision, so backup Pavel Francouz will get the start in goal for Colorado. Francouz is an NHL goalie, and is capable of playing well, but his career numbers don’t matchup to Kuemper’s. Edmonton scored three goals on 16 shots on Kuemper in game one and then scored three on Francouz (21 shots). They should feel confident that if they play well they can continue their high-end scoring.
Kuemper’s injury presents an opportunity, and Edmonton needs to take advantage of it.
Last month in round one of the Pittsburgh/New York Series, the Penguins controlled the first four games and led the series 3-1. The Rangers didn’t have a response for Sidney Crosby. He dominated the first four games, but then he got injured and missed games five and six. The Rangers used that injury to their advantage, won both games, and even when Crosby returned for game seven the Rangers still won.
Untimely injuries can crush a team in the playoffs, and they can leave fans and organizations playing the what-if game.
If Dwayne Roloson doesn’t get injured in game one of the 2006 Stanley Cup Final, does Carolina still win?
If Kevin Durant and Klay Thompson aren’t injured in the 2019 NBA Final, do the Raptors win?
If @Victor Hedman isn’t injured in round one (he was actually hurt late in regular season and played two games, but wasn’t close to ready) in 2019, would the Blue Jackets still be looking for their first playoff series win?
What if the 2020 Avalanche didn’t lose their top-two goalies? Could they have gone deeper, possibly all the way to the Cup final?
Injuries can be devastating, because they are unpredictable and unexpected, and in many cases difficult to overcome, especially when the injured player(s) is one of the star players on a team.
But, the Oilers shouldn’t, and won’t, feel sorry for the Avalanche. Like the Rangers, Hurricanes, Raptors, Blue Jackets and countless other teams, Edmonton must turn the Avalanche’s misfortune into a positive for Edmonton.
It won’t be easy. Colorado did a great job of limiting the Oilers’ scoring chances off the rush, but also limited their controlled entries into the offensive zone. The Oilers only had 27 controlled zone entries, their lowest total of any playoff game this year. Against Calgary, the Oilers had 43, 43, 37, 47 and 36 controlled zone entries. The Avalanche did an excellent job of not allowing the Oilers to enter the zone with speed. That is one of Edmonton’s biggest strengths, and they need to counter the Avalanche’s neutral zone play. But Edmonton also needs to limit the time they spent defending.
It is difficult to attack when you don’t have the puck. The one benefit for the Oilers is, despite not playing to their best offensive strength, they still scored six goals. They aren’t lacking in offensive confidence. They need to work harder, but also smarter. They have shown they can rebound from a subpar effort, and I expect they will play better.
The Oilers have scored 4+ goals in 10 of their 13 playoff games. Scoring hasn’t been an issue, and it shouldn’t be tonight, but while the Oilers are focused on offence, they need to be better defensively. They gave up 47 shots in game one. They gave up too many rush chances and cycle chances. They have to match the speed and desperation of the Avalanche.
If they do, then the offence will come and if they create enough quality chances history suggests they will score on Francouz. He has a career .891Sv% in nine playoff appearances.

Kane – McDavid – Draisaitl
Hyman – RNH – Yamamoto
Foegele – McLeod – Puljujarvi
Archibald – Ryan – Kassian
Nurse – Ceci
Keith – Bouchard
Kulak – Barrie
Smith
Jay Woodcroft switched Kane and Hyman. He’s shown he isn’t afraid to switch things up if some individuals aren’t going, or if he doesn’t like how a line or D pair is playing. Kane-McDavid-Draisaitl were dominant in round two and Woodcroft is hoping that continues tonight.
Edmonton isn’t facing elimination tonight, however, if they go down 2-0 to the Avalanche the road to winning the series is daunting. In the previous 98 Conference Final series the team with a 2-0 series lead is 91-7.
A team trailing 2-0 hasn’t won the series since the 1991 Pittsburgh Penguins. It has only happened twice in the last 57 years.
Pittsburgh in 1991
Islanders in 1984
Chicago 1965
Detroit 1963
Chicago 1962
Toronto 1959
Detroit 1945
Only the 1991 Penguins went on to win the Stanley Cup.

Landeskog – MacKinnon – Nichushkin
Lehkonen – Kadri – Rantanen
Aube-Kubel – Compher – Newhook
Cogliano –  Helm – O’Connor
Toews – Makar
Byram – E. Johnson
J. Johnson – Manson
Francouz
Francouz starts in place of Kuemper and they will also be without Andre Burakovsky. He took a Bouchard slapper off the foot in game one.  Losing Kuemper and Burakovsky, who had 61 points this season, are significant losses. Jared Bednar was happy with how they checked in game one, despite allowing six goals, and liked his team’s speed and offensive finish. The Avalanche will be focused without their starting goalie, and I wonder if they try to lock it down defensively even more. 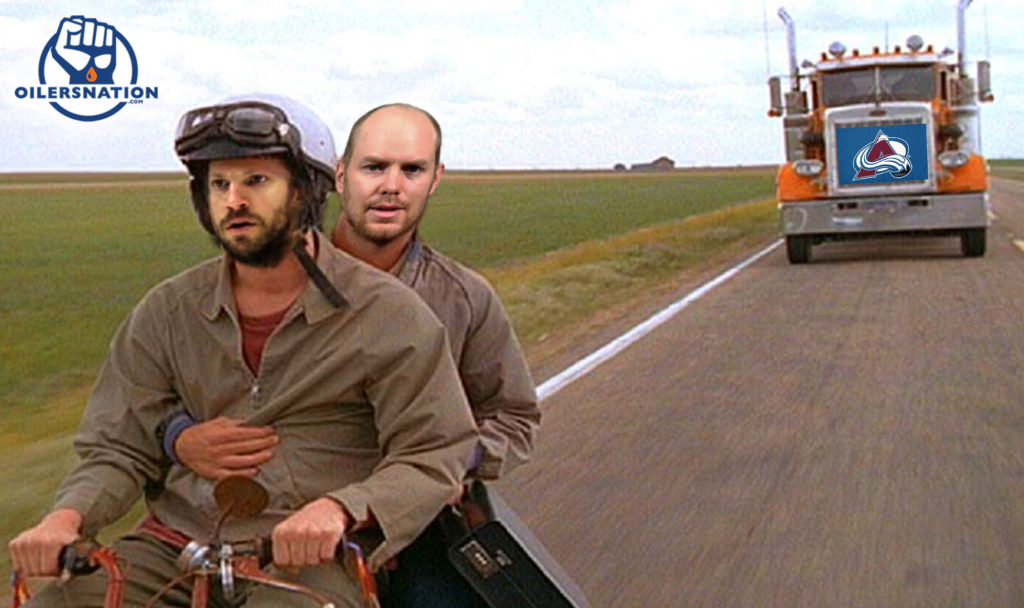