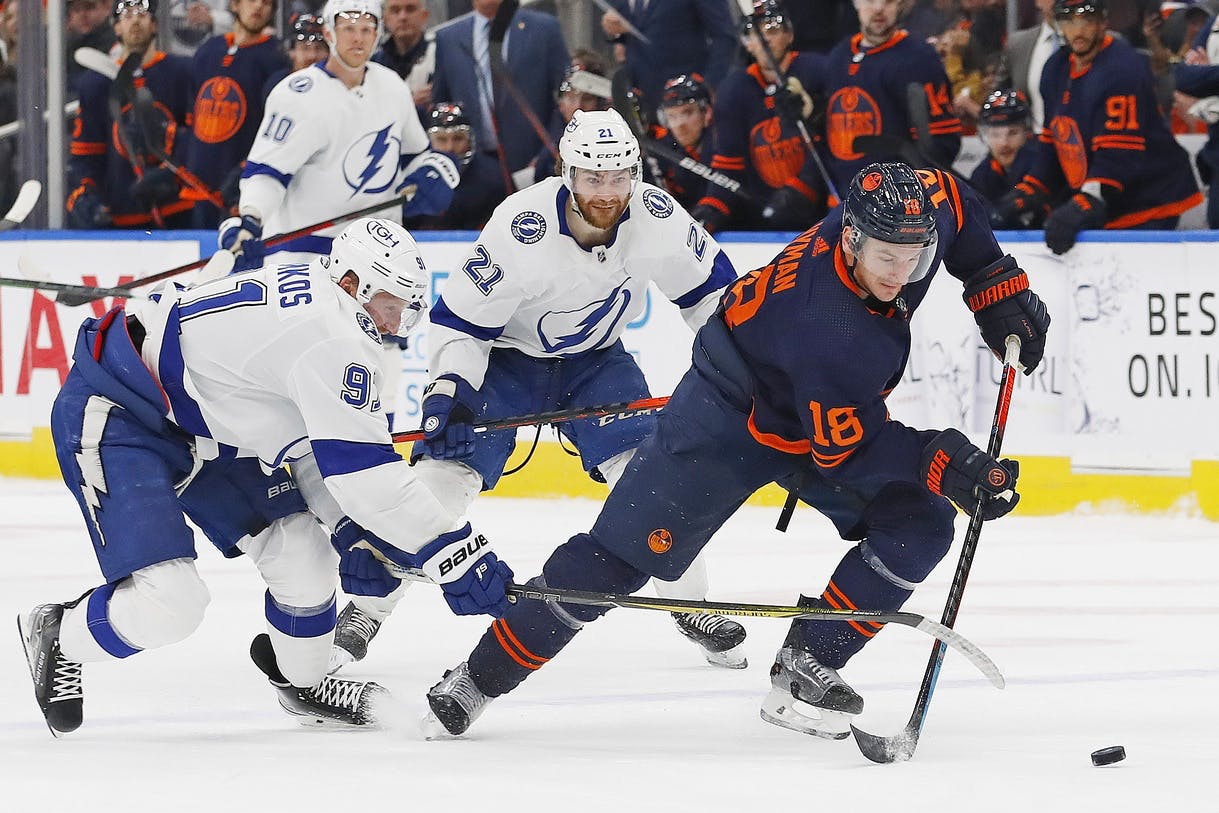 By Jason Gregor
2 months ago
Welcome to our game day content presented by NHL Odds site Betway!
Edmonton might be better off playing with eggs in their pants tonight and avoiding any type of physical or stick contact. They can’t afford to take a penalty, because right now their penalty kill is more inviting than a new puppy.
The Oilers’ PK has allowed 18 goals on 56 kills. They are 30th in penalty kill efficiency at 67.9%. Last night an injury-riddled Washington power play, without four of its regular first-unit players, still scored four goals on five opportunities. Edmonton is averaging 1.38 power play goals against per game thus far. They have the league’s second-best power play at 31.3%, but they are only scoring 1.15 goals/game on the PP.
Even the second-best PP in the NHL can’t break even with the team’s woeful penalty kill. And the problem is there isn’t one easy fix. It likely would help if they’d stop taking so many penalties. They’ve been on the PK 4.31 times/game in 13 games. Only Dallas is worse at 4.33. The Oilers are averaging more than one more time shorthanded/game than 15 other teams. They need to be more disciplined.
That is a start, but they will still take penalties. Every team does, so their PK must improve.
It starts in goal. Jack Campbell (.786sv%) and Stuart Skinner (.800Sv%) need to stop more pucks. It isn’t good enough. Between 2020-2022 Mike Smith had a .901Sv% on the PK, while Mikko Koskinen was at .882. Among goalies who made at least 80 starts over those three seasons, Smith had the best PK Sv% and Koskinen was sixth best. A good PK starts in goal. Campbell and Skinner need to make more stops.
The penalty killers need to make better reads, get more sticks in lanes, get their bodies in shooting lanes more, clear pucks out when they have the chance and battle harder to win faceoffs. Edmonton has been a good penalty killing team for the past three seasons. They had an ugly stretch from December 1st to January 1st last year where they struggled at 66%, but in 2020 and 2021 and the first 20 games last year and the final 38 this team has been top four in penalty killing.
They shouldn’t just forget how to do it. The need to be more committed as a group. More determined. More dedicated. Confidence plays a role, no doubt, but to regain their confidence they need to start with working smarter and harder. They’ve allowed way too many slot passes. It has been an issue from the start. It is easy to say don’t do it, but with the PK struggling so much I wonder how much a lack of confidence plays a role now. Players are hesitating a split second, not just reacting, and it is killing them.
There isn’t one simple solution, but it is Jay Woodcroft and his player’s problem to fix. It will take a long time for their PK to get back to 80% on the season, so they simply have to start tonight and try to be 80% moving forward. Focus on that number. Right now, 80% would put them 14th in the NHL. Not great, but not horrific. It would make a massive difference if they could be 80% over the next 13 games. That would be seven fewer PP goals against (assuming they continue taking penalties at the same rate). That would reduce their GA/game by 0.53 — a major improvement.

RNH – McDavid – Puljujarvi
Kane – Draisaitl – Hyman
Foegele – McLeod – Ryan
Shore – Holloway – Yamamoto
Nurse – Ceci
Kulak – Bouchard
Murray – Barrie
Campbell
We expect Jack Campbell to play. Markus Niemelainen could draw back in, but Ryan Murray was fine. He wasn’t on for a goal against. Woodcroft played the four aforementioned lines together last game, outside of loading up McDavid and Draisaitl at times, and the Oilers won the 5×5 battle. I’d expect similar lines to start tonight.
Lightning…
Hagel – Point – Kucherov
Stamkos – Paul – Killorn
Koepke – Namestnikov – Colton
Maroon – Bellemare – PerryHedman – Cernak
Sergachev – Perbix
Cole – Foote
Vasilevskiy
The Bolts are still very good and its star players are all still very dangerous. They do miss Anthony Cirelli, but they have enough depth to overcome his absence. Their top line has been very dangerous recently as Nikita Kucherov has found his groove with goals in six straight games and 19 points on his current 10-game point streak. Their bottom six has been outscored 12-5 so far at 5×5. Edmonton will need to exploit that tonight. 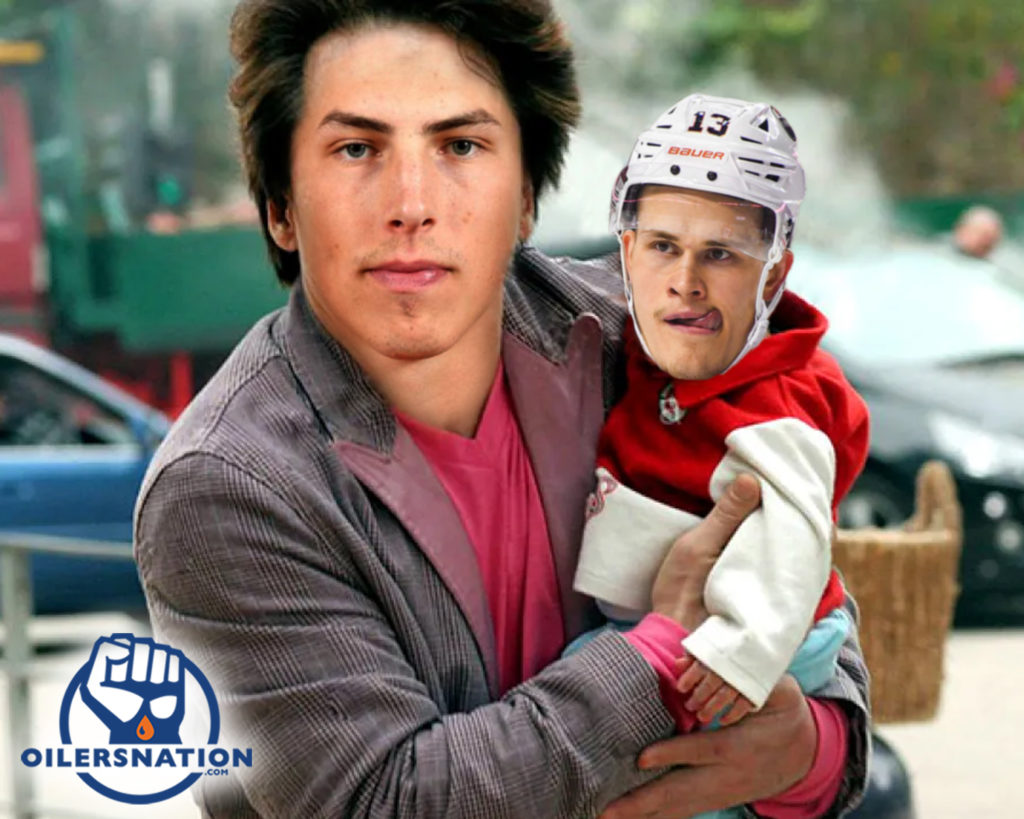 Photoshop: Tom Kostiuk
GAME DAY PREDICTION: Edmonton has lost nine consecutive games in Tampa Bay. They haven’t won there since December 9th, 2009, when Zack Stortini put them ahead 3-2 midway through the second period. They held on to win 3-2. McDavid and Draisaitl win for the first time in Tampa as the Oilers surprise us and win 4-3.
OBVIOUS GAME DAY PREDICTION: Tampa scores a power play goal.
NOT-SO-OBVIOUS GAME DAY PREDICTION: Edmonton outscores Tampa in the first period. Oilers had been outscored 16-11 in the first prior to tonight.
Editorials
Featured
Gameday Previews
Oilers Talk
Recent articles from Jason Gregor