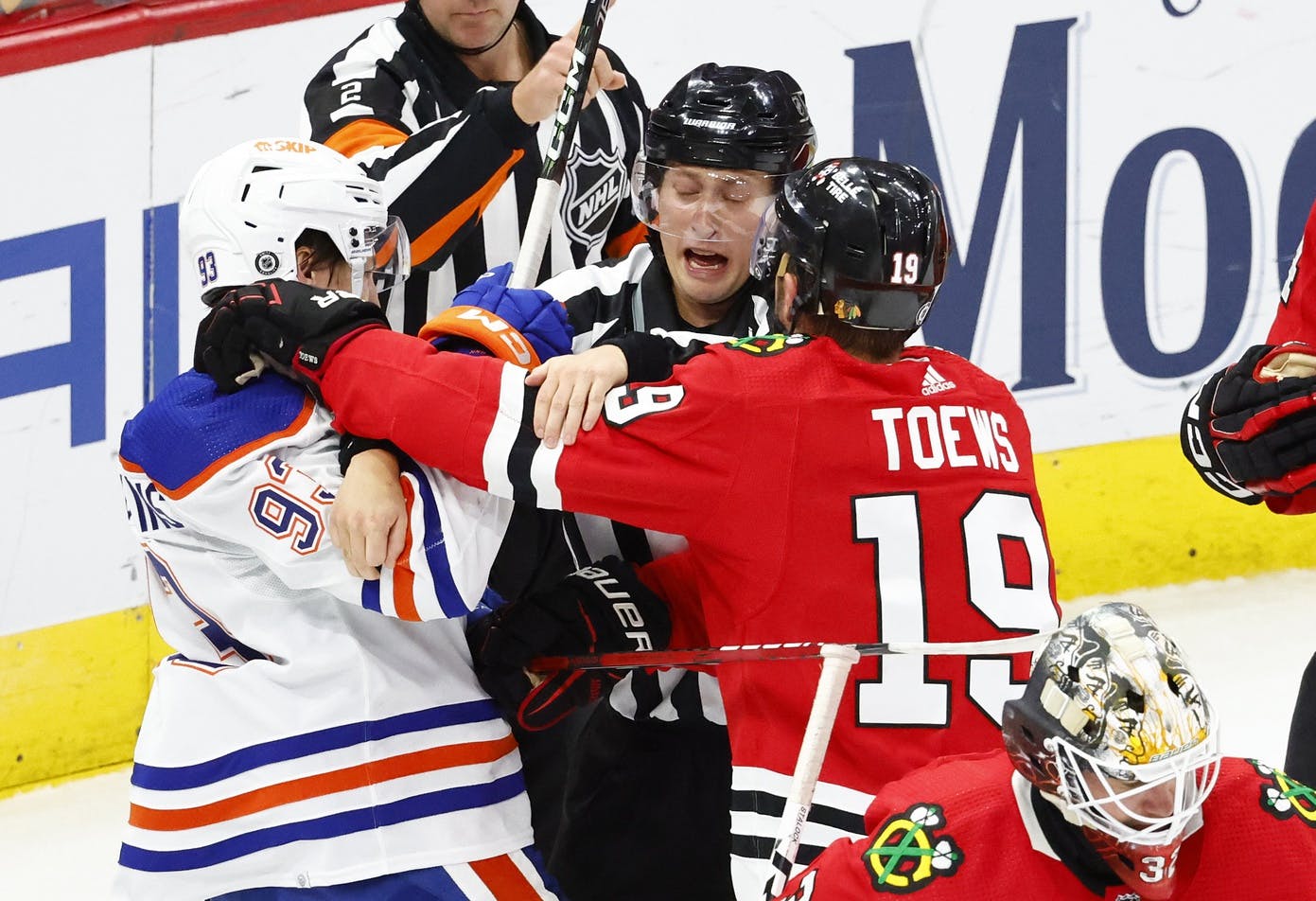 By Jason Gregor
1 month ago
Welcome to the game day coverage: Be sure to check out the latest Oilers game day odds from NHL betting site Betway.
The adage “Keep it simple, stupid” or “KISS,” is very apropos when looking at the best way to win in the NHL. It doesn’t matter if you are a good team, or a bad team, there is one simple stat that gives teams the best chance to win.
Score four goals. Of course, scoring isn’t easy, but after a quick look at all the teams in the NHL, it is clear how much better they are when they score four goals. The Oilers are 9-1 when they score four goals and 3-9 when they don’t. Chicago is 4-2 when they light the lamp four times and 2-9-4 when they score three or less.  Even bad teams like Columbus are undefeated (7-0) when scoring four goals.
Vancouver, Buffalo and Columbus have yet to win a game when they don’t score four goals. The only teams to win even half of their games when they don’t score four goals are Boston (7-2), New Jersey (5-4) and Seattle (5-3-2).
There is a lot of focus on not allowing goals, which is fair, but I find too often there is more of a focus on that than there is on scoring goals. And I think too often we don’t focus in on the need to bury good scoring chances. Offence is more prevalent today than in recent seasons, and with more of an emphasis on puck possession and skill it is vital to not only create scoring chances, but to finish them.
Chicago doesn’t have a lot of skill in its lineup. They don’t score many goals, sitting 31st averaging 2.48 goals/game and they also don’t defend well, allowing 3.62 goals against/game which ranks 29th.
Currently, there are 60 players in the NHL averaging 1.00 points/game or higher. There are 37 in the Eastern Conference and 23 in the West.
Edmonton, Buffalo, Colorado, Dallas, Tampa Bay, Toronto and Vancouver each have four players averaging 1.00+/game.
Boston, Carolina, Detroit, New Jersey and the New York Rangers have three.
Calgary, Chicago, Nashville, St. Louis and Washington have none.
The Oilers have Connor McDavid (1.77), Leon Draisaitl (1.50), Ryan Nugent-Hopkins (1.05) and Zach Hyman (1.00). Patrick Kane leads the Hawks at 0.76 points/game with 16 in 21 games. Edmonton’s top players are leading the way and they should be able to create a significant number of chances tonight. They just need to bury them.
Petr Mrazek has struggled mightily in Chicago. The Blackhawks are allowing the most quality chances against per game according to Sport Logiq, so it isn’t all on Mrazek, but he’s struggled much more than the other goalies and he won’t be starting tonight. In eight starts Mrazek has a .878Sv% and 4.27 GAA. Alex Stalock posted a .914Sv% and 2.93 in his six starts while Arvid Soderblom has a .910Sv% and 3.00 GAA in seven starts. He will get the start tonight.
He has struggled in his past three starts, allowing 11 goals on 82 shots (.865Sv%). Edmonton should have no problem generating quality chances against Soderblom, and they need to ensure they don’t make him look like Martin Brodeur for a night.

Draisaitl – McDavid – Hyman
Janmark – RNH – Puljujarvi
Benson – Shore – Ryan
Holloway – Malone – Hamblin
Nurse – Ceci
Kulak – Barrie
Broberg – Bouchard
Skinner
The only lineup change is Tyler Benson in for Klim Kostin, who is in Calgary getting a work visa. Head coach Jay Woodcroft will load his top line to start the game, rather than wait until midway through the game like the past two games. It makes sense. The Blackhawks don’t have much depth and the Oilers’ depth forwards need to play like they did v. Florida two nights ago. The bottom-six dominated possession time, shots on goal and scoring chances. They didn’t score, but they didn’t spend much time in their own zone, and they had positive shifts to keep the momentum in Edmonton’s favour.

Athanasiou – Toews – Kane
Kurashev – Domi – Raddysh
Khaira – Dickinson – Blackwell
Katchouk – Entwhistle – R. Johnson
J. Johnson – S. Jones
Roos – Murphy
McCabe – C. Jones
Soderblom
Chicago will load up its top line as well, but the Oilers’ top line should still have an advantage.
I’d take the over tonight. Most games the line is 6.5 and the Oilers have been over in 14 of their 22 games which is 63.6%. Only Columbus (66.7%) and Florida (65.2%) have hit the over more often. Chicago is one of the only nine teams who have been over (assuming the line is 6.5) in more than half their games. 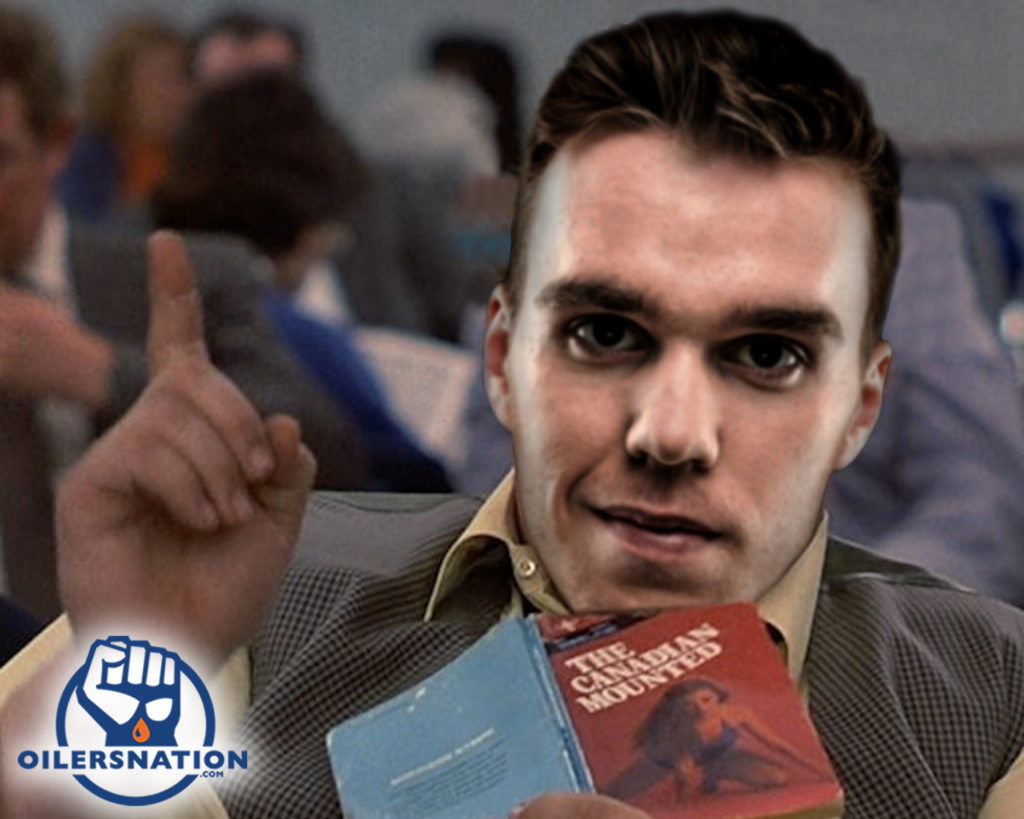 Photoshop: Tom Kostiuk
GAME DAY PREDICTION: Edmonton doesn’t take Chicago lightly and the top line has a night. Oilers win 5-2.
OBVIOUS GAME DAY PREDICTION: Zach Hyman scores twice. He has 18 shots in his last three games, but no goals. He’s played great but hasn’t scored. He gets rewarded for his relentless work ethic with a pair of goals.
NOT-SO-OBVIOUS GAME DAY PREDICTION: The unusual 8:40 p.m. start time in Chicago will benefit the Oilers. It will feel like the second period, and the Oilers will score first and score two goals in the first period for only the second time all season. Edmonton enters the game with a first period goal in only 11 of 22 games.
Editorials
Featured
Oilers Talk
Recent articles from Jason Gregor