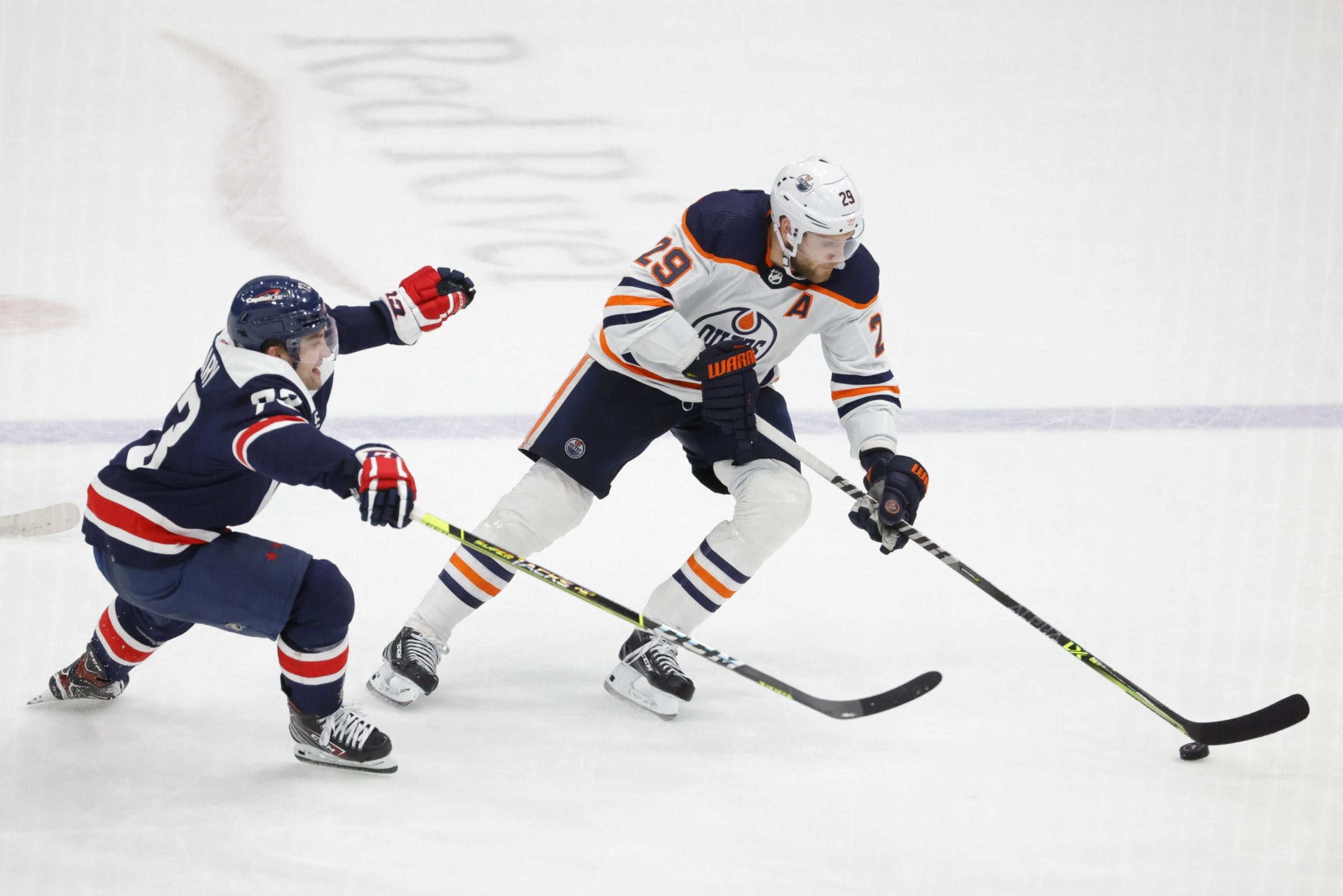 By Jason Gregor
1 month ago
Be sure to check out the latest Oilers game day odds from NHL lines site Betway
The Oilers’ penalty kill is definitely not “killing it.” The PK is 28th at 70.4%. The Oilers are 31st in PP goals allowed with 29 and they don’t make life easier by being short-handed the second most times/game at 3.92.
Washington defeated the Oilers 5-4 on November 7th on the strength of four power play goals. The Oilers’ PK was a horrific 67.9% through their first 13 games, and the Capitals game was the exclamation point on their struggles. The Oilers coaches changed their PK the following night v. Tampa Bay and had success.
They became more of a pressure penalty kill and instructed their blueliners to play closer to the net. It worked initially as over the next nine games the PK improved to 83.3% allowing only five goals on 30 kills. But the PK has slipped again over the past three games, allowing six goals in 12 shorthanded situations.
Overall the Oilers’ PK was 67.9% in the first 13 games and allowed 18 goals on 56 kills.
In their past 12 games, the PK is 73.8% and has allowed 11 goals on 42 kills.
The good news is they are taking fewer penalties, but the recent three-game skid is a clear sign the woes of the PK still exist. The challenge is there isn’t one simple fix. The goalies, defencemen and forwards need to be better. The Oilers’ PK was great the past few years, mainly because Mike Smith and Mikko Koskinen made a lot of saves. Smith had the best PK Sv% in the NHL and Koskinen was sixth.
Among the 40 goalies who have played 10 or more games, Stuart Skinner is 32nd in PK Sv% at .803 and Jack Campbell is 34th at .789. Both need to be better. Skinner got beat by Max Domi and Nick Suzuki on the short side on shots from the side. Those are stops they want him to make. But there are more issues than just the goalies.
“Some of it has been self-inflicted,” said Jay Woodcroft. “We go back to the past few games, and we’ve looked at a lot of film, and certainly there are some things we can control off faceoffs that we can be better at. We have the people to get the job done, and we haven’t done that recently.”
They will need to be better on faceoffs, and ensure they get the puck out when they have an opportunity. Most penalty kills struggle when players miss getting the initial clearing attempt out of the zone. It extends the PP time and the penalty killers become fatigued. Edmonton can’t give Alex Ovechkin and the Capitals extra zone time tonight.
Recently, the Capitals’ power play hasn’t been as dominant as it was from 2011-2021 when it was the best PP in the league for a decade. Last year the Capitals ranked 23rd at 18.8% and they are 22nd at 20.7%. They miss Nicklas Backstrom, but as they showed on November 7th, if you give them too many opportunities, and you don’t pressure them, they will make you pay.
Meanwhile, the Oilers’ power play continues to produce. Leon Draisaitl leads the NHL with 10 PP goals and Connor McDavid is tied for second with Kirill Kaprizov with nine. The Oilers’ top guns have combined for 19 goals. The Capitals have 19 PP goals. Edmonton has a clear advantage on the power play, but their penalty kill needs to improve to make that advantage count.

Draisaitl – McDavid – Hyman
Janmark – RNH – Puljujarvi
Holloway – Malone – Yamamoto
Kostin – Shore – Ryan
Nurse – Ceci
Kulak – Barrie
Broberg – Bouchard
Skinner
The forward lines are simply a projection. Kailer Yamamoto returns to the lineup after missing 11 games due to a concussion. He did skate with Draisaitl and McDavid yesterday, but Zach Hyman had a “maintenance day.” He is expected to play tonight and if he does, Woodcroft could just keep his top line together, or he could move Hyman on the left side with RNH and slot Yamamoto on the top line. Or he keeps Hyman on the top line and slots Yamamoto in lower. Yamamoto returns to the lineup looking for his first goal of the season, so slotting him on the top line would be a bit of a surprise for me.
Tyler Benson and Ryan Murray stayed out late after practice which is usually a sign they won’t be in the lineup. Warren Foegele is getting closer and could return later this week. The Oilers need to activate Yamamoto from IR, and they could simply activate him and move Foegele to IR retroactively to November 28th. Or they could send James Hamblin to the AHL.

Ovechkin – Strome – Sheary
Milano – Kuznetsov – Oshie
Johansson – Eller – Mantha
Protas – Dowd – Hathaway
Gustafsson – Carlson
van Riemsdyk – Jensen
Alexeyev – Irwin
Lindgren
The Capitals’ blue line is without two of its top-four defenders in Dmitri Orlov and Michael Fehervary. Fehervary was injured in the second period in Calgary and is on IR. Goalie Darcy Kuemper also left Saturday’s game in Calgary and won’t play tonight. He was elbowed in the head.
Washington has been decimated by key injuries all year, and the Oilers could really benefit from starting the game on time. Maybe the earlier start time will help them. 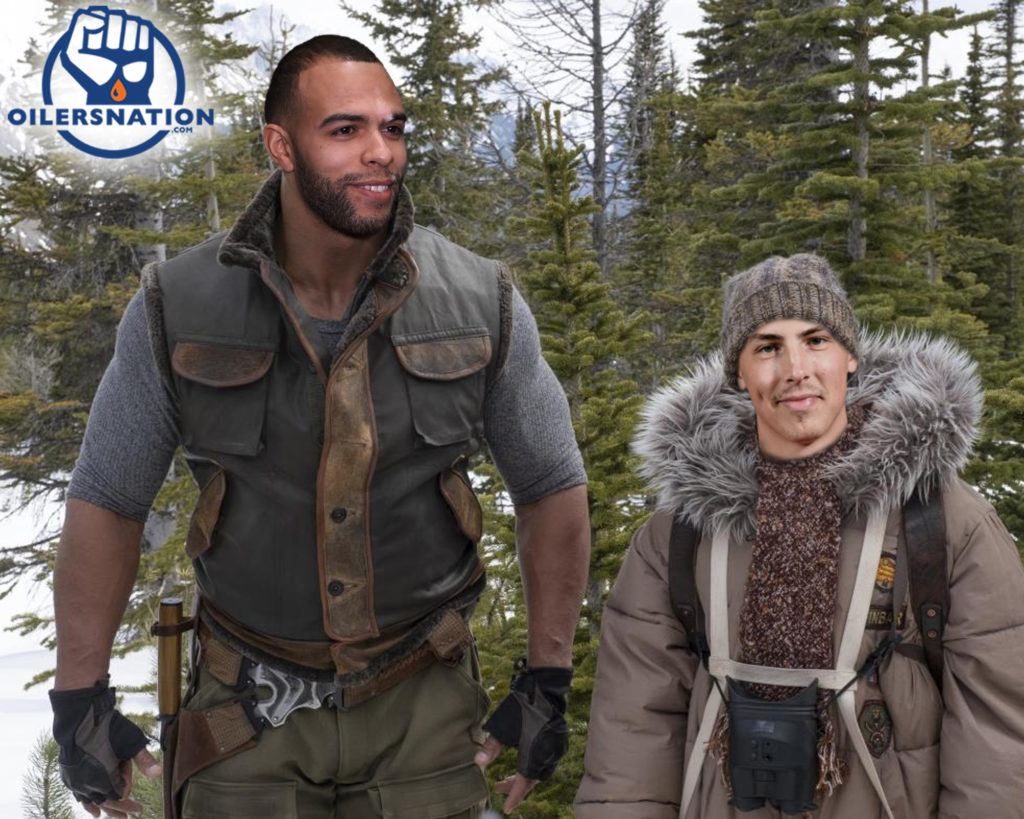 Thanks to everyone who donated to our Pyramid of Giving and to Nex Gen Transportation who agreed to match the $7500 pyramid. We ended up raising a total of $16,600 for the Holiday Hamper.
Day #3: Package #1: The Ultimate Made to Measure experience.