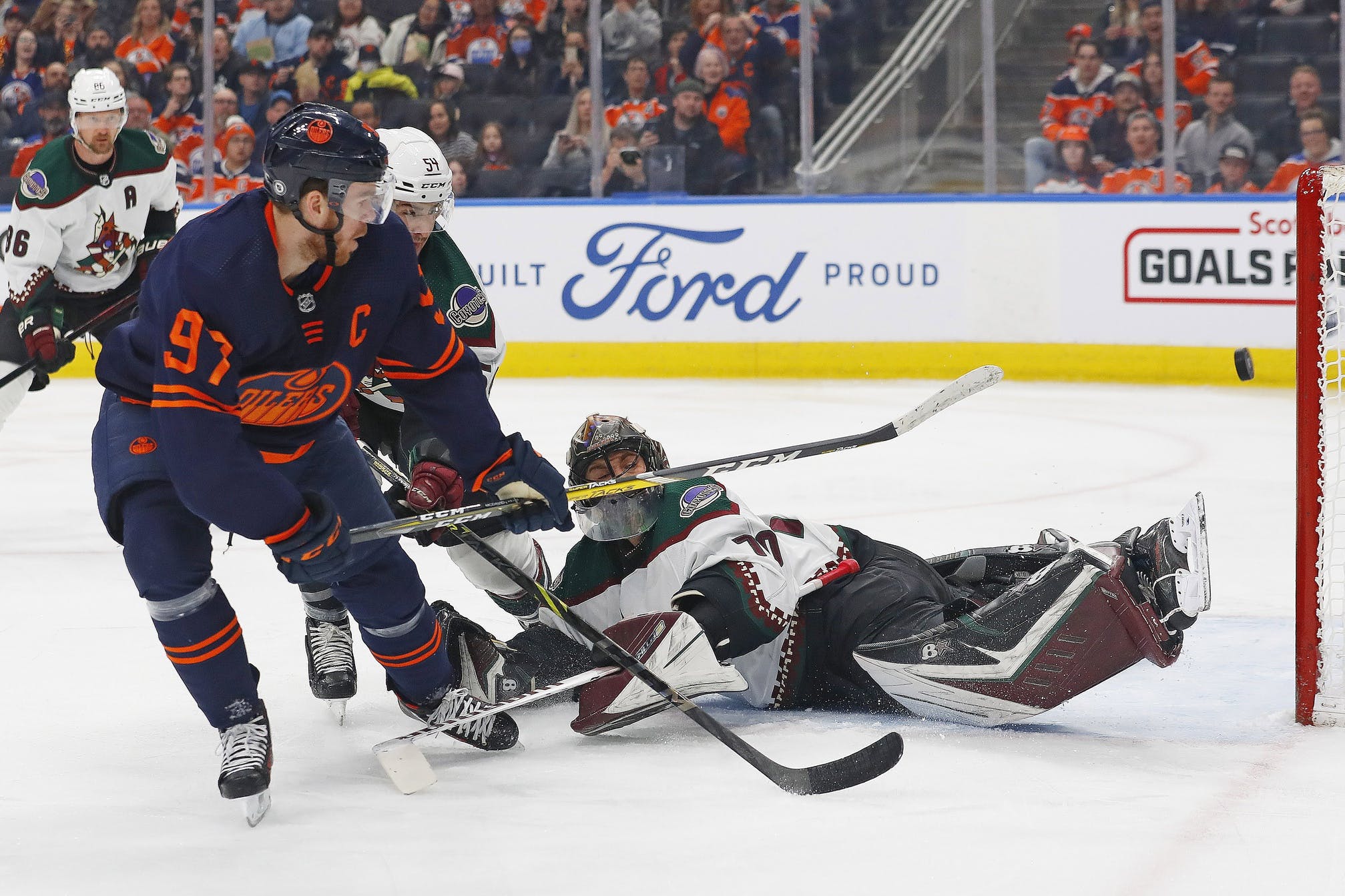 By Jason Gregor
1 month ago
Be sure to check out the latest Oilers game day odds from NHL lines site Betway
The temperature in Oilersnation seems unusually high considering the Oilers are in a playoff spot. They aren’t dominating, but a victory tonight over the 29th-place Coyotes would move Edmonton into a tie with Los Angeles for third in the Pacific Division. Edmonton hasn’t been as good as they’d like — or as many predicted, including myself, — but 26 average games don’t mean they need to blow things up.
I had people texting the show yesterday wondering if Jay Woodcroft is the issue. Seriously. I understand why some Oilers fans are frustrated. I’m sure if you gave the general manager, head coach and players some truth serum they too would be frustrated with their start, but I think there is a difference between frustration and desperation. Ken Holland shouldn’t be desperate right now, nor should Woodcroft, and I don’t think either are.
Since Woodcroft became head coach on February 10th the Oilers have the second most regular season wins in the NHL and have the sixth best points percentage. The Oilers have won 40 of the 64 games he’s coached. Edmonton hasn’t been as sound defensively in 26 games this season as they were through 38 last year with Woodcroft. That is accurate and fair, but any suggestion the coach is the problem is moronic, to put it politely.
The Oilers haven’t been consistent enough. Jack Campbell has struggled in goal, the team has struggled defensively and some players who produced last year are shooting blanks. I can’t blame the head coach for that, however, it is his problem to fix. And that is what they are working on. Woodcroft agreed this morning the team hasn’t played as well as last year. Ryan Rishaug asked him how last year the main focus was getting forwards tracking back to pucks to help the D and it worked. But this year they haven’t been as effective. Why?
“I’ve seen it for stretches but not consistent enough,” said Woodcroft. “It is an area we have to keep hammering on. When your game is connected, five pieces up on a forecheck or five tracking back to your own end, we are better.”
The coach knows where the team is struggling, but fixing it isn’t always quick or easy.
I’ve also heard some who believe Evan Bouchard getting benched is the first sign he will be dealt. I disagree. Very few players are untouchables, so Bouchard could be moved, but Woodcroft and Dave Manson have worked with him for years and they know what he is capable of. Sitting him on the bench for the final 13 minutes was more “tough love” than “patience is running out” from Manson.
Bouchard is still learning the NHL game. He has had great nights, but he’s also had some rough patches. Bouchard, like many young defenders, is still working on improving his defensive game, but he showed in the playoffs that he can be solid defensively as long as he brings intensity. Learning to bring it most nights is not easy. In junior he was more skilled than most players so he could get by on skill alone, but that doesn’t happen in the NHL where the gap between skills is minimal, except for the truly elite players like Connor McDavid, Leon Draisaitl and a few others around the league.
I think it is premature to think the Oilers are even considering moving Bouchard. I don’t sense they are. His playoff performance was very good, and he’s only played 128 NHL games. It is fair to say he needs to be more consistent, as do many other Oilers, but I wouldn’t read anything more into the benching that it being the coaches trying to get Bouchard’s attention. How he responds tonight and the next few games will be interesting to watch. I believe he will be better for it and respond well.
Despite some lacklustre play, the Oilers are still in a good position to climb the standings, but there are things that need to improve.
They need to play, as Woodcroft said, a more connected game 5×5.
Their PK needs to sharpen up. They’ve been good for years on the PK ,sitting eighth on the PK between 2020-2022.
They need better starts. This has been a concern for a few seasons. In the three previous seasons the Oilers scored first in 99 of their 209 games. That ranked them 21st. However, they had the best winning percentage in the NHL at .818 over three years going 81-13-5. They are dominant when they score first, they just have struggled doing it often enough.
And that has continued again this season. It is easy to say “Be ready to start the game.” The players have discussed it often, but the results haven’t improved. The truth is they don’t have to make a massive improvement. Calgary scored first in 53% of its games the past three seasons, and has scored first the sixth most times in the NHL. The Oilers did it at 47% of their games. If they could get up to 51 or 52% they’d be top-10.
This season they’ve scored first in 11 of 26 games (42%). If they scored first three more times they’d be 14 of 26 and at 53%. So it isn’t a massive ask. Just get on a run to score first, and tonight presents the best opportunity to score first.
The Coyotes are not good, and they are sick of being on the road. Tonight is the final stop on their 14-game roadie. That is brutal, and they are 1-6-3 in their last 10 on the trip after winning the first three. Fatigue and frustration has set in. They are ripe for another loss, but they won’t just hand it to the Oilers. Edmonton needs to get a first-period lead and slowly choke the life out of an already tired team.

Draisaitl – McDavid – Hyman
Janmark – RNH – Yamamoto
Holloway – Hamblin – Puljujarvi
Kostin – Shore – Ryan
Nurse – Ceci
Kulak – Barrie
Broberg – Bouchard
Skinner
Zach Hyman is back in the lineup after missing the last game due to illness. James Hamblin and Dylan Holloway have been moved to the third line and Stuart Skinner starts for the 9th time in 12 games.

Keller – Boyd – Schmaltz
Crouse – Bjugstad – Maccelli
Fischer – Hayton – Guenther
O’Brien – McBain – Kassian
Chychrun – Gostisbehere
Brown – Moser
Nemeth – Stetcher
Vejmelka
Vejmelka has played very well, but he doesn’t get much help. He has the 10th best save above expected and a solid .912Sv% despite facing a high number of quality chances. 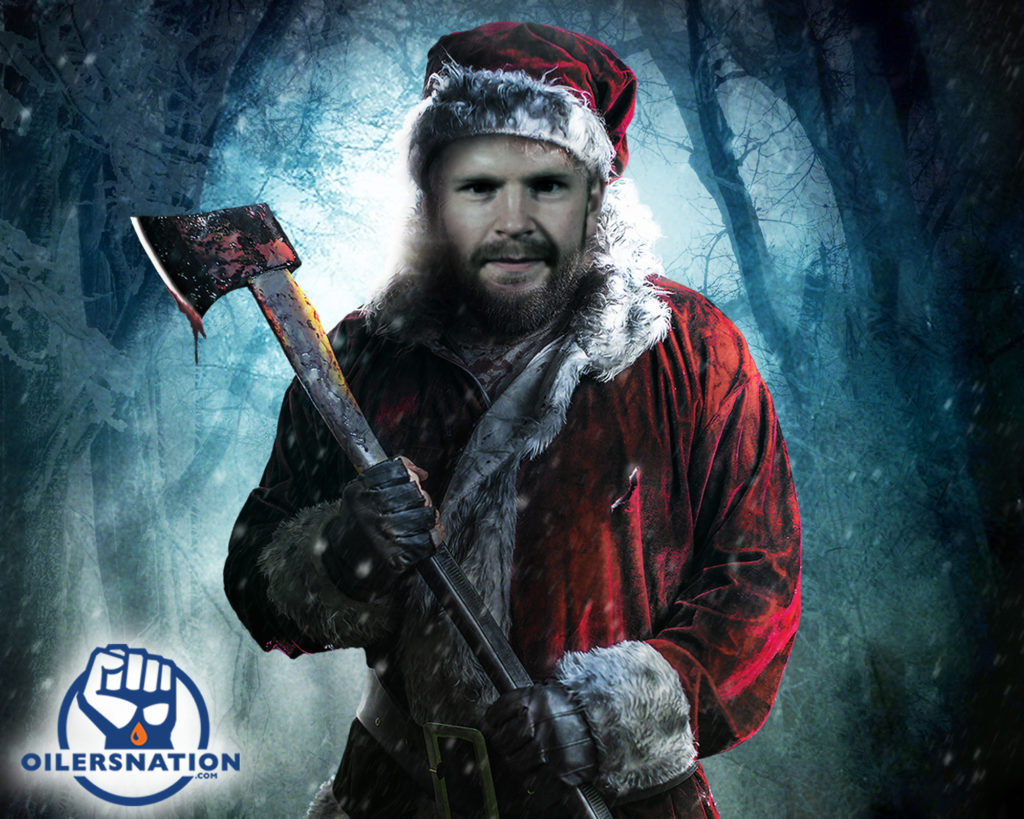 You can bid by listening to TSN 1260 between 2-6 p.m. today and calling 780.444.1260 or text 101260. All money raised will help out The Christmas Bureau. Thanks in advance.
Editorials
Featured
Oilers Talk
Recent articles from Jason Gregor