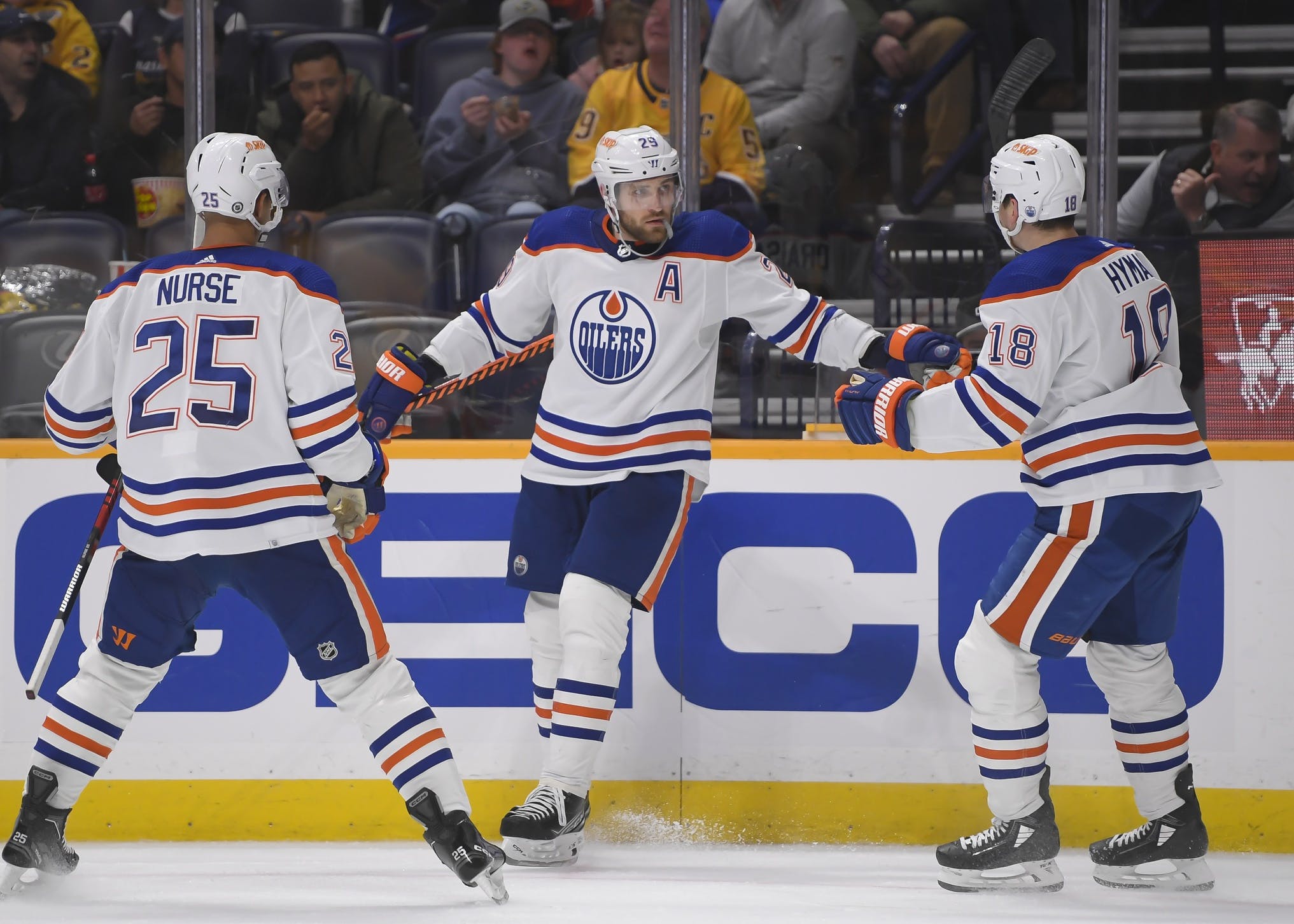 By Jason Gregor
1 month ago
Some results in sports are hard to decipher. You can look at many factors, and it is odd to see how much the Edmonton Oilers have dominated the Nashville Predators over the past five seasons.
Be sure to check out the latest Oilers game day odds from NHL betting site Betway
Since the start of the 2018-19 season the Oilers are 9-1-1 v. the Predators and have outscored them 46-26. It is a bit surprising because in that same time span the Oilers have a .577P% (173-123-27), which is exactly the same as the Predators’ .577P% (170-121-27). The Oilers have played a few more games, but their points% are identical, yet the Oilers have feasted on the Predators.
Nashville has the 10th best goals against/game in that span at 2.89, yet Edmonton lights them up to the tune of 4.18 goals/game.
On the surface, you’d say the domination must be due to Leon Draisaitl and Connor McDavid. That is correct, but it isn’t the only factor. Draisaitl has 20 goals and 30 points while McDavid has 6-18-24 in 10 games. McDavid and Draisaitl score against every team in the league, but their production is better v. the Predators.
The Oilers scoring goals for fun is a bit odd considering Nashville has Jusse Saros in net. In the past five seasons, Saros is top-10 in games started, 185, and he is sixth in Sv% at .918. Among the top-10 goalies in GP he has the third best Sv%, behind Darcy Kuemper (.921) and Andrei Vasilevskiy (.920). Saros hasn’t been awful against the Oilers with a .913Sv%, but that number does look better due to the 31-save shutout he had for their only victory in the past five seasons. In his other five starts, Edmonton scored 19 goals and he has a .897Sv%. He is one of the best goalies in the NHL, yet in five of his six starts the Oilers have lit him up.
The Predators have been a good defensive team overall, and one of the top teams in the NHL in 5×5 goals against, having allowed the eighth fewest goals/game at 1.83, while the Oilers sit 22nd at 2.13. The Oilers are middle of the pack (14th) in 5×5 goals (2.00/game), and Nashville is 16th at 1.98. Yet in their head-to-head matchups Edmonton outscored Nashville 27-19 at 5×5. Edmonton limiting the Preds to 1.72 goals/game while scoring 2.45 is an outlier compared to their other games.
Where Edmonton should dominate, and has, is on special teams.
Each team has had 40 power plays in the 11 games. Edmonton has 14 goals. Nashville has five. Edmonton’s PP is 35% while Nashville’s was 12.5%.
The Oilers’ PK is 87.5% and the Predators is 65%. Edmonton has scored two shorthanded goals to the Preds’ one.
Overall, Edmonton has outscored Nashville15-6 on special teams. This matches their overall play as the Oilers have the #1 PP the past five years while the Predators are 23rd. The Oilers are 19th on PK and Nashville is 22nd.
If Edmonton continues to draw penalties (they are currently fifth in the NHL at 3.72/game), this game sets up well for them to get back in the win column. The Predators’ PK hasn’t had an answer for Draisaitl or McDavid. Draisaitl has 11 power play goals, McDavid two and Alex Chiasson had one. Players not named Draisaitl and McDavid have scored 20 goals for Edmonton in the 11 games. If the Oilers get 1.81 goals/game from players outside of their superstars their odds of winning are quite high. They just need to limit the major defensive miscues that have plagued them the past two games.

Draisaitl – McDavid – Hyman
Janmark – RNH – Yamamoto
Foegele – Holloway – Puljujarvi
Kostin – Shore – Ryan
Nurse – Ceci
Kulak – Barrie
Niemelainen – Bouchard
Campbell
Dylan Holloway gets a look at centre and there is a lot of speed and size on the third line. I’ve liked Holloway’s game, and when Ryan McLeod returns, I wonder if we finally see Holloway get a look in the top six. Mattias Janmark is better suited to play in the bottom half.
Tyson Barrie has played excellent hockey for past 11 games. He has 13 points, second most among D-men in the NHL. At 5×5 he’s outscored the opposition 10-2 (76.7%). He has solid possession numbers, but most importantly he hasn’t made many, if any, glaring errors directly resulting in goals. He has been very good for Edmonton without much fanfare.
Jack Campbell defeated the Predators last Tuesday and will look to build on that tonight.

Forsberg – Novak – Granlund
Smith – Johansen – Duchene
Niederreiter – Glass – Sissons
Trenin – Parssinen – Jeannot
Josi – Gross
Ekholm – Carrier
Lauzon – Fabbro
Saros
The Predators are 0-4-2 in their last six games. They’ve been outscored 20-9. Their blueline is still without Ryan McDonagh, but Jeremy Lauzon and Alexander Carrier are back after missing last Tuesday’s tilt with the Oilers due to injury.
The Predators are hoping that spreading their skilled forwards over three lines will kickstart their offence. They are tied for 29th in goals/game at 2.41. Only Chicago is lower at 2.27. But Anaheim is tied with Nashville and the Oilers allowed them to score four with some crucial giveaways on Saturday. A repeat performance is ill-advised. 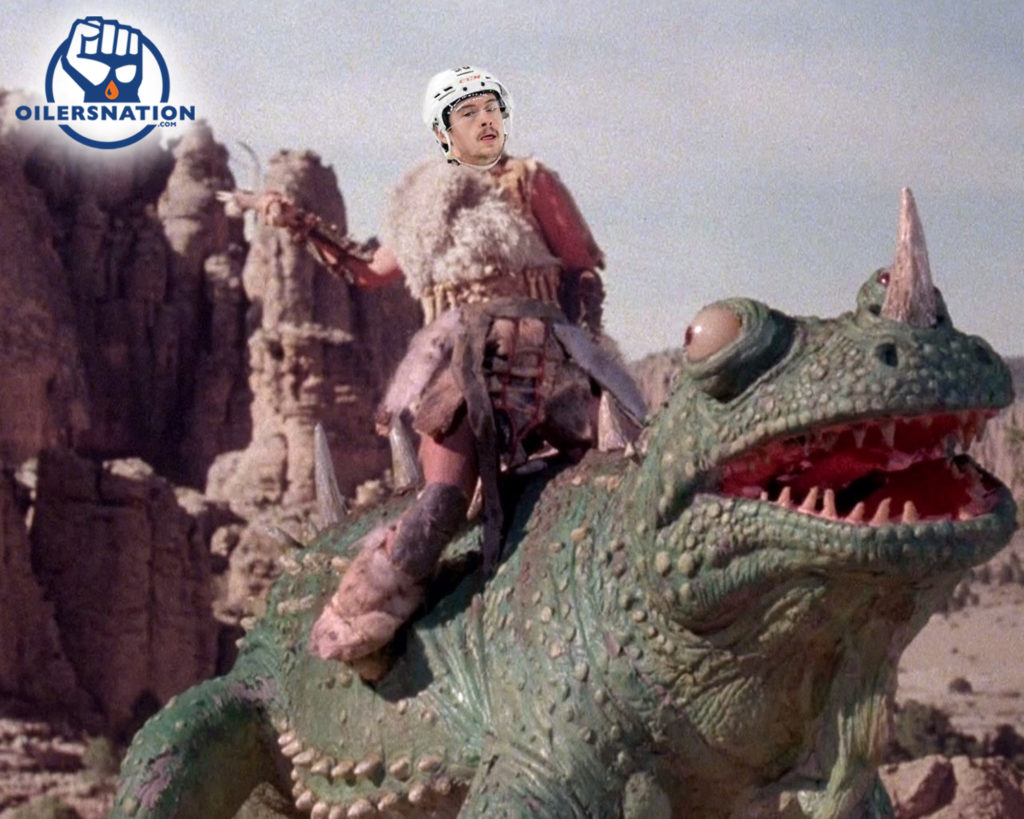 Thank you to everyone who donated in our Pyramid of Giving on Friday. We raised an incredible $20,600 for Adopt-A-Teen.
Day 13: Package #1: Air Ease A97MV Furnace from A-1 Heating.

Edmonton’s most exhilarating driving experience. Jump into one of their race-tuned cars and speed around one of Canada’s best racetracks, Strawberry Creek Race Way. It is a 4 km fully paved private racetrack. This package is for an ENTIRE day with everything included to learn high performance driving techniques. Embrace life in the fast lane on our 4 km track of pure racing bliss. Experience the thrill and power of racing speeds up to 180KM/h.
Your Race Experience Will Include:
Their Cars:
You can bid by calling 780.444.1260 or text 101260 between 2-6 p.m. to TSN 1260 today. Money raised will go towards The Christmas Bureau.
Editorials
Featured
Oilers Talk
Recent articles from Jason Gregor