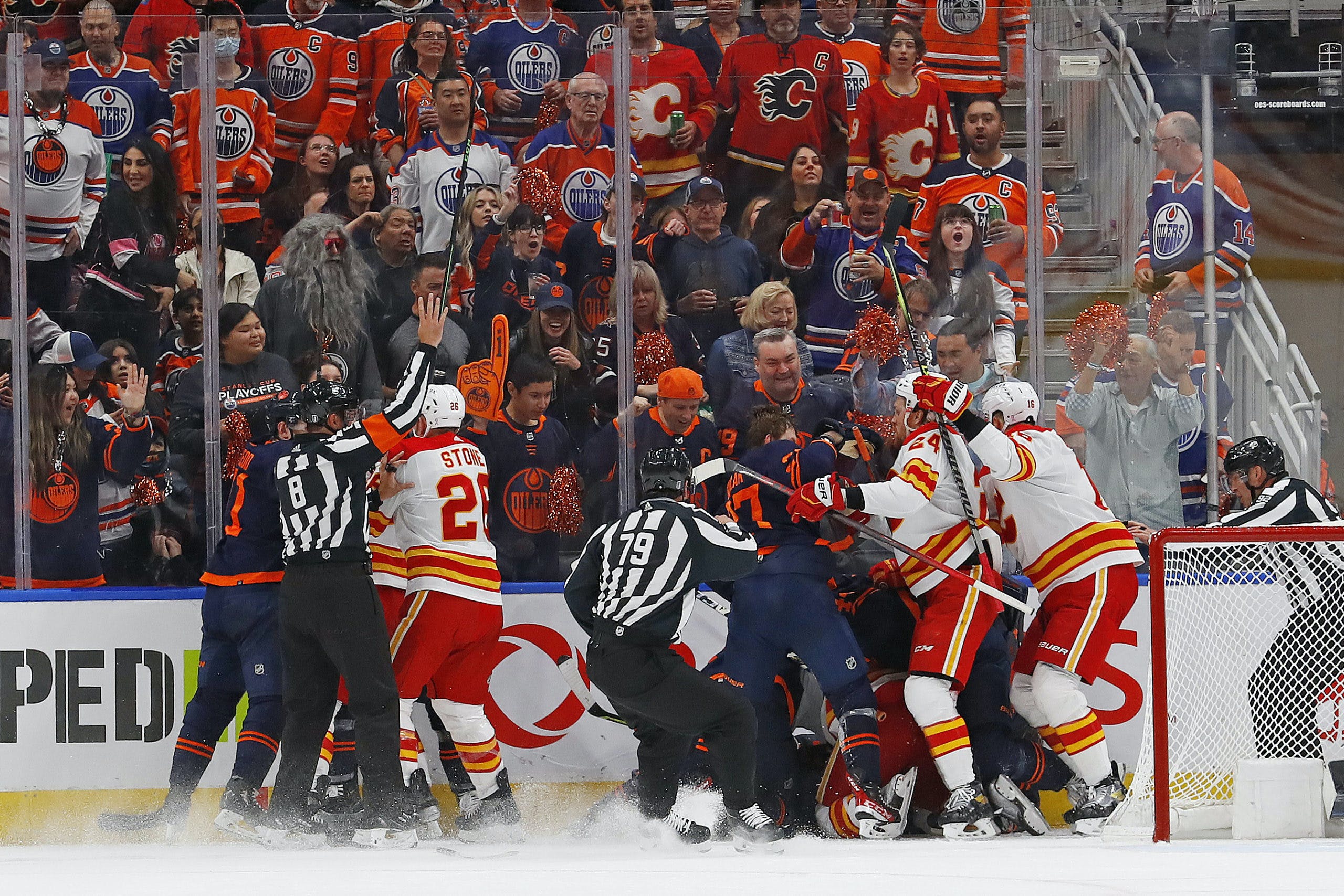 By Cam Lewis
1 month ago
It’ll be the reigning Battle of Alberta Champions going up against the Battle of Alberta runner-ups as the Edmonton Oilers host the Calgary Flames on Saturday night.
1. Saturday night’s match between the Oilers and Flames will be the first of just three Battle of Alberta games during the regular season. The two teams will play in Calgary on October 29 and they’ll again play in Calgary on December 27 right after the league’s Christmas break. After that, there won’t be another Battle of Alberta unless the Oilers and Flames meet in the playoffs, a very strange scheduling quirk from the league given how exciting this rivalry is right now.
2. The Oilers and Flames both opened their respective 2022-23 seasons with 5-3 wins, as Edmonton beat the Vancouver Canucks and Calgary beat the Colorado Avalanche by the same score. All of the Flames’ major additions from the off-season got involved on the scoresheet, as MacKenzie Weegar picked up two assists and both Jonathan Huberdeau and Nazem Kadri had an assist each in the win over Colorado.
Elsewhere… Johnny Gaudreau didn’t register a point in his first game with the Blue Jackets, as Columbus lost their first game by a score of 4-1 to the Carolina Hurricanes. Matthew Tkachuk scored an empty-net goal in his debut with the Florida Panthers, a 3-1 win over the New York Islanders.
3. The Flames had a bit of an advantage in their win, as Colorado opened their season at home with a win over the Chicago Blackhawks on Wednesday and didn’t arrive in Calgary until early in the morning on Thursday. The Oilers will be well rested after two full days off between their win over the Canucks and their game against the Flames.
4. Thursday’s win over the Avs represented the first time that the Flames won their season-opening game since the 2009-10 season, a streak of 12 consecutive years in which Calgary started the season with a loss.
The last time they won their season opener was a 5-3 victory over the Canucks on October 1, 2009. Mark Giordano, Rene Bourque, Adam Pardy, Brandon Prust, and Dion Phaneuf scored for the Flames and Miikka Kiprusoff made 39 saves in the win.
The first loss in Calgary’s 12-year season-opener losing skid? A 4-0 loss to the Oilers on October 7, 2010, highlighted by this gem from Jordan Eberle…
4. Head coach Darryl Sutter said that the Flames’ second line of Nazem Kadri, Andre Mangiapane, and Dillon Dube was the team’s best trio on the night…

“Thought they had a big effort every shift,” Sutter said. “When they were together, when we were able to get our lines in order, I thought they were clearly our best line.”

The Kadri line outshot opponents 8-to-4 at even-strength and beat the Avs 3-to-0 in high-danger chances. The top line of Elias Lindholm, Jonathan Huberdeau, and Tyler Toffoli was fairly quiet in the win, as they were outshot by the Avs 8-to-6 at even-strength and had just one high-danger opportunity.
5. Special teams will be an interesting thing to watch between these two teams.
The Oilers scored three of their five goals against the Canucks with the man advantage, going an impressive 3-for-4 on the power-play in the game. Edmonton also did very well on the penalty kill, allowing the Canucks to score just once during their whopping eight power-play opportunities, while also scoring a short-handed goal.
The Flames will be in tough against Edmonton’s elite power play, but they did a very good job at shutting down a similarly excellent Colorado unit, as the Avs scored just once over their four opportunities. The Flames also scored two goals on five opportunities with the man advantage in their win over the Avs.
6. The Oilers made a roster move on Friday, sending Devin Shore to the AHL while bringing up defenceman Philip Broberg. Shore going down means that the Oilers only have 12 forwards on their roster, so it’s safe to assume that one or both of Kailer Yamamoto and Warren Foegele will be good to go against the Flames.
If only one of Yamamoto or Foegele draws in, we could see Jay Woodcroft and Co. roll with the 11 forwards, seven defencemen lineup that they’ve used before in the past. Broberg wasn’t on the ice with the team at practice on Friday but Markus Niemelainen could suit up in order to give the Oilers an added physical presence in the defensive zone.