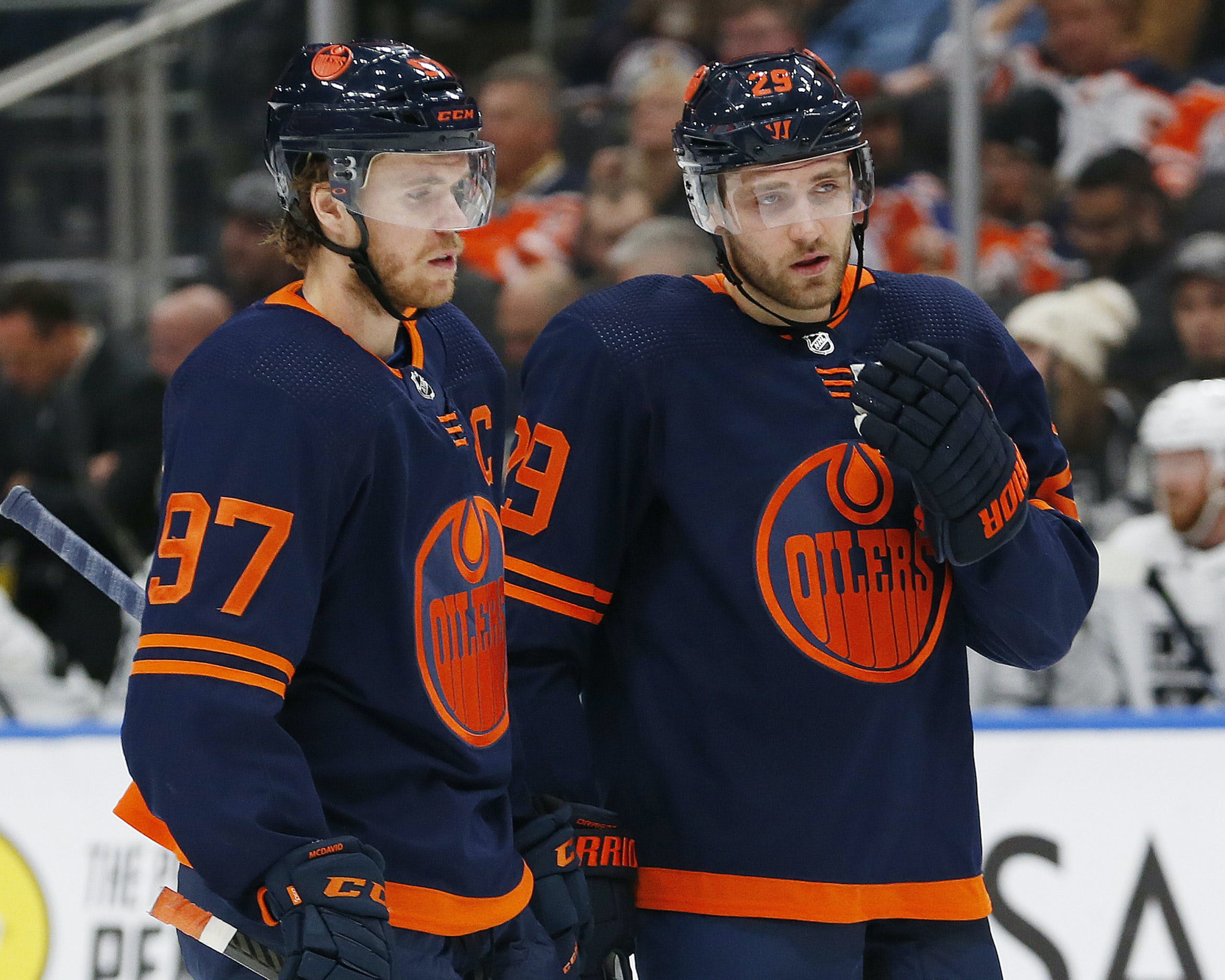 By Jason Gregor
9 months ago
The Oilers woke up in Los Angeles fresh off a stifling defensive effort against the San Jose Sharks with an opportunity to move into a tie with the Kings and the Anaheim Ducks for third place in the Pacific Division. A regulation win will give the Oilers 55 points and they’d still have one game in hand on LA and two on the Ducks. Edmonton is in the midst of a tough stretch with five games in seven days, however, the schedule maker did give them a few breaks.
— San Jose hadn’t played in two weeks prior to last night’s loss and it showed. Their passing was off and outside of the first five minutes they were unable to generate much. The Oilers only allowed one scoring chance off the rush, and that came in the final six minutes of the game. The Sharks are 28th in the NHL in scoring chances off the rush, so it wasn’t like Edmonton stifled the Colorado Avalanche, but the Sharks usually average 5.2 rush chances per game. Edmonton almost pitched a perfect game in scoring chances off the rush.
—  They did have the perfect game in not allowing one odd-man rush. Impressive. Edmonton has had games where they allowed, 1, 2, 3, 3, 3 and 4 odd man rushes, but this is the first this season allowing none. It illustrates how well they played. Dave Tippett often talked about the gap between his forwards and defence was too big and that led to chances off the rush. However, they never fixed it. Jay Woodcroft and Dave Manson have presented different options and the Oilers have been much better in limiting the Islanders and Sharks with speed through the neutral zone. It is only two games, and the Sharks and Islanders are 24th and 29th in offence so we need to be a bit cautious in anointing the Oilers a defensive juggernaut. But no doubt there has been a noticeable change in their defensive play in all three zones.
— I think much of it is starting in the offensive zone and how they read plays. Last night when the Sharks had possession, the Oilers had a few different plays.
1. Sharks had possession just inside their blue line. Look how deep Connor McDavid is. He was almost in his own zone as the Oilers had three players at their blue line.
2. On this play San Jose has the puck in the middle of their zone, and Edmonton has one forward pressuring them, but the other two have peeled back in the neutral zone and Edmonton has four players on their side of the red line.
3. Here the Sharks have clear possession deep in their zone. Ryan McLeod pressure and swings to the side with the puck, while Tyler Benson swings the opposite way to have pressure on the right side (Sharks attacking right side), while Draisaitl swings and comes back up the middle of the ice. San Jose has no play in the neutral zone and has to dump it in. But because Benson and Draisaitl were swinging and coming back with speed that allowed William Lagesson to and step up at centre, while Evan Bouchard had been playing in the middle of the ice and then he slides over to the left boards at the Oilers blue line and steers Cogliano into the corner.
— The past few years when I interviewed Woodcroft discussing the Bakersfield Condors, he spoke often about how defending starts in the offensive zone. We are seeing that in these first few games. The other biggest difference I’ve seen is how much better the forwards are coming back. There aren’t big gaps between the forwards and the D-men all the time. But that doesn’t mean that sometimes the defence will still back in. There has been a lot of talk about the Oilers’ blue liners not holding the line enough. At times that occurs, but often it is due to no back pressure, but sometimes even when you have forwards hustling back the smart play is to not to step up at the blue line. Here is a good example of Broberg letting the play come to him. He senses no real threat, as it is a two-on-two, and he sees two teammates back checking hard. Another play off the rush that results in nothing dangerous for the Sharks.
— Sticking with odd-man rushes, when the Kings defeated the Oilers 5-1 on December 5th the Oilers only had one odd-man rush. The Kings did a great job limiting the Oilers’ speed through the neutral zone, and limited their chances overall. LA had 22 shots from the slot to the Oilers 11. LA had seven scoring chances off the rush while only allowing two. Despite more quality chances the score was 2-1 with seven minutes remaining, but then Connor McDavid was given a five-minute boarding major and the Kings scored three power play goals to blow the game open. LA’s main strength is defending. 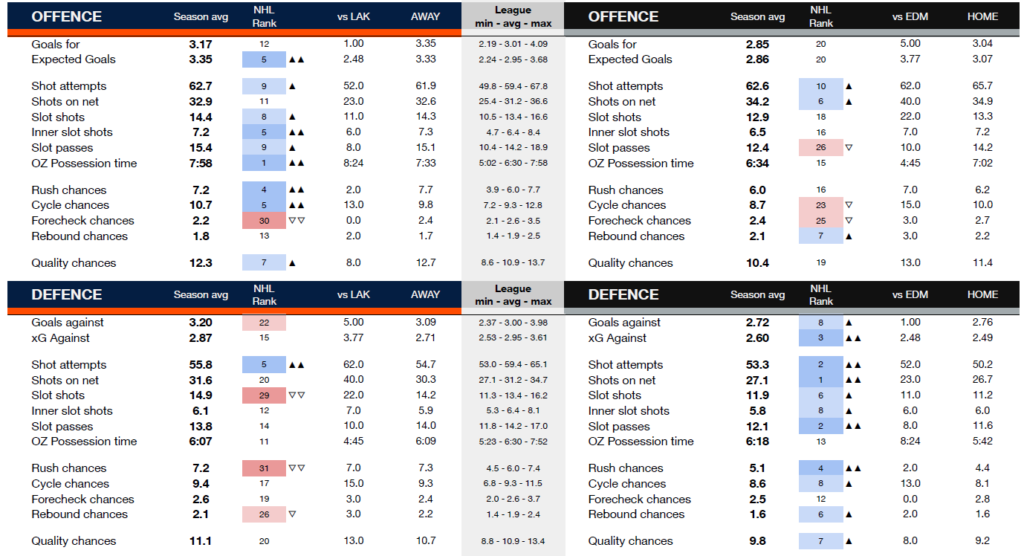 The Kings rank top-10 in 11 of 13 defensive categories, while the Oilers are top-10 in 10 of the 13 offensive categories.
— The Sharks hadn’t played in two weeks last night and it showed. Their passing was off most of the night. They struggled completing passes. Tonight is the Kings’ first game in two weeks as well. They last played February 2nd. They might have an initial surge or adrenaline like the Sharks did last night, but as the game goes on I won’t be surprised to see rust in the finer details of LA’s game. Edmonton needs to take advantage of this. Jason Strudwick mentioned last week how he felt the first game back after the All-Star break was always more difficult for the home team. We saw it for Edmonton v. Vegas, and last night for San Jose. If that trend continues it will be good news for the Oilers.
— @Stuart Skinner picked up his first career shutout last night. What a thrill for the 23-year-old. He made some key stops in the first five minutes, and then wasn’t really tested until the final 10 minutes, but he remained focused and sharp all game. Since 2000 the Oilers have had nine shutouts where they allowed fewer than 20 shots. The most recent was November 19th, 2013 when Devan Dubnyk stopped all 14 shots from the Columbus Blue Jackets. It is rare to limit the opposition to under 20 shots and to get a shutout, as going long stretches without facing any rubber can be challenging. Full marks for Skinner.
— @Mike Smith likely starts tonight, but I wonder if Skinner’s performance will have the Oilers keep Mikko Koskinen on COVID protocol until after the weekend. I’d have to think they will want Koskinen to have at least one full practice before playing him in a game at Winnipeg (Saturday) or home to Minnesota (Sunday). It would make more sense to run Smith and Skinner and then you could activate Koskinen when they go on the road trip. Or they could just keep Skinner and Smith on the roster and waive Koskinen. After listening to Ken Holland mention a tandem of Smith/Koskinen last Thursday, I’d be surprised if they waive Koskinen. But if Skinner plays well again this weekend, I can see the argument as to why they could consider it.
— @Darnell Nurse scored his 50th goal of his career last night. He is the fourth Oilers defenceman to score 50 goals in the blue and orange.
Paul Coffey had 209 in 532 games.
Charlie Huddy scored 81 in 694 games.
Kevin Lowe scored 74 in 1037 games.
Nurse has 50 in 445 games.
He will pass Huddy and Lowe in the coming seasons, but he’d need to average 15 goals a year for 10 seasons to get close to Coffey. Unlikely.
— Nurse didn’t score a goal in his first 16 games, but he has five in the past 23 games. That ties him for fifth most goals among NHL defencemen since December 5th. Cale Makar (8), Noah Dobson (7), Roman Josi and Mike Matheson (6) are ahead of him, while Victor Hedman, Brady Skjei, Shea Theodore, Shayne Gostisbehere, Devon Toews, Rasmus Dahlin and Evan Bouchard are tied with five.
— Since the start of last season Nurse is tied with Josi and Aaron Ekblad for second most goals among D-men with 21. Makar has 22. But Nurse leads all D-men with 19 even strength goals.
—  Woodcroft is a big fan of Nurse. “Darnell is money in the bank with being able to play big minutes on the back end against the best players in the world,” he said. “He’s somebody who has really grown his game. I would use the term he burns with purpose. He comes to the rink every day with a purpose in mind to be the best he can be. He’s somebody who is serious about his craft and I really believe he’s only scratching the surface.”
—  Nurse turned 27 earlier this month. He’s just entering his prime years. I’m still surprised how many fans complain about his contract despite him only making $5.6m this season. Nurse improved last year and after a slow start, he’s played quite well overall. If he continues to play like this, or improve as his head coach believes he can, then he will live up to his new contract next season.

LISTEN TO THE LATEST EPISODE OF REAL LIFE

On the Monday episode of Real Life, the guys looked at everything from potential trade targets to the all-star game.