By Jason Gregor
10 months ago
The Edmonton Oilers need to end 2021 with a win. With only three wins in their last seven games, they are going the wrong way in the standings and need to stop the slide against the 25th-place New Jersey Devils.
— You know the saying: “Excuses are like a$$holes — everyone has one and they all stink.” Well, excuse time is over. Edmonton needs results, and with @Darnell Nurse and @Jesse Puljujarvi returning to the lineup, this is the healthiest the team has been since game three. They need a consistent effort, from all players, like they did v. Seattle. Play sound defensively, stop gifting goals and winning becomes much easier.
— Dmitri Samorukov had one of the toughest NHL debuts I’ve seen in St. Louis. He was clearly nervous, which is normal, but he let his nerves get to him. He made plays he’d never make. He didn’t look comfortable. Jim Playfair gave him one more shift after he’d been on for two consecutive goals against, where he made bad reads, and Samorukov allowed the Blues to attack again down his side of the ice with ease and almost score. Playfair had no choice but to give the young defender the rest of the night off. It was unfortunate, but the game was only 2-1 at that point, and I don’t think they could risk allowing Samorukov more chances to find his footing.
— Many players deal with adversity at various stages of their careers. One game won’t define Samorukov. He will learn from it and be better prepared the next time he gets an opportunity.
— With Puljujarvi back in the lineup, @Kyle Turris should come out. At this point, I don’t see any reason to play him unless the Oilers have no choice. He isn’t making plays. I don’t see what he can offer that helps them at this juncture of his career. He had a very good career, but right now he isn’t helping them.
— In 81 games in 2021 Ryan Nugent-Hopkins has 10 goals and 23 points at 5×5. That ranks 206th among forwards in 2021 and he’s played much of that time with Connor McDavid or Leon Draisaitl, who are first and second with 76 and 62 points at 5×5 respectively. He has three goals and nine points in 29 games this season. He needs to be more productive to remain in the top-six. I honestly believe if the Oilers can find two top-six wingers then RNH is best served to be the third line centre. If I was building the team that is what I’d be looking to add. But until then, RNH needs to be hungrier around the net at 5×5.
— One of the most impressive aspects of @Evan Bouchard’s game is his ability to get pucks on net with velocity, but without a big wind up. His goal against the Blues was a perfect illustration of how he can get pucks on goal quickly, before goalies are set. He is most comfortable in the offensive zone at this point, and if the coaches want to put him on the power play, I’d be leery of keeping him paired with Nurse. Adding more minutes could fatigue him, and hinder his play at 5×5. I think if they feel the need to make a change with Tyson Barrie on the PP, then Barrie will play with Nurse 5×5. I wouldn’t ask Bouchard to do both at this point. His defensive play isn’t his forte yet, so asking him to play more minutes overall won’t help him when it comes to defending. I can see the logic with just playing him with Nurse and not on the PP for now. The power play isn’t an area of weakness of the team. Limiting goals 5×5 is.
— Here is a quick look at the strengths and weaknesses of the Oilers and Devils. 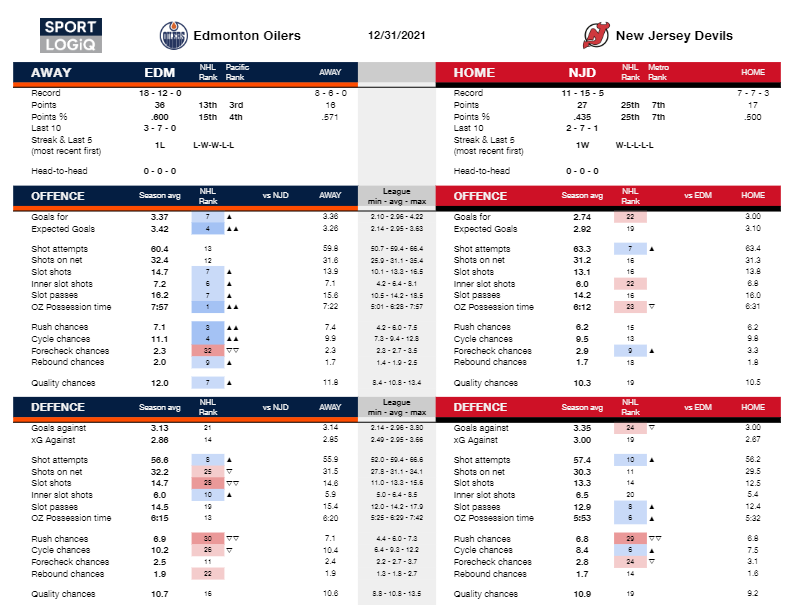 Edmonton has no problem scoring, but limiting goals (broken record, I know) is still their main weakness, although if you buy into expected goals against, the Oilers are 14th. Their main weakness continues to be they make egregious errors that lead to “easier” goals against. It has been a problem all season. I’m not sold it is a system issue, either. Because it is different players at different times. It isn’t the coaches’ fault, but it is their problem and Dave Tippett and Jim Playfair need to help figure it out. Until the “gift” goals are reduced it will be difficult for the Oilers win four or five games in a row.
— @Jack Hughes scored three points in Tuesday’s 4-3 victory over Buffalo. He has 11 points in 14 games. He has been much more dangerous this season, but he’s only played 14 games. If he can stay healthy he is starting to look like the dangerous offensive player he was projected to be when he was drafted first overall in 2019. The Oilers need to be aware of him and his linemates, Jesper Bratt and Yegor Sharangovich. They are highly skilled, but they do struggle defensively. Force them to defend more and the Oilers should be able to create some chances against them.
— Hughes has only played 28 minutes on the power play this season and only has one point. They are 31st in PP% at 13.8%. Whether Hughes is on it or not their power play has really struggled. Edmonton’s PK has struggled in December (10 games) at 73.3%. So it isn’t a guarantee they will shut down the anemic Devils PP. Edmonton needs to get its PK back on track.
— Edmonton is 3-7 in December. I wonder how much of that is due to injuries/COVID on the blueline. Darnell Nurse missed three games, Cody Ceci missed four, Kris Russell five, Duncan Keith seven and Slater Koekkoek eight. It isn’t an excuse, just a fact, but with Nurse returning today they are back to their regular top-six defenders. We’ll see if that helps calm the waters.
— The Oilers PP is 19.4% (17th in December). Not good enough for their talent. The biggest difference is they aren’t shooting as much. And their best players aren’t shooting. In the first 20 games Draisaitl had 31 shots and McDavid had 27. They were averaging 24.76 and 21.96 shots/60 respectively.
In December Draisaitl is down to 19.64 shots/60 and has three goals in 10 games after scoring 10 in the first 20. He wasn’t going to score 40 PP goals, so a dip was expected, but he’s still shooting at a good rate. However, McDavid is down at 12.04 S/60 and has no goals. He had five goals PP goals in the first 20 games. His shot totals have dropped significantly and it is easy to connect why he hasn’t scored a PP goal. It might sound too simple, but if I’m Glen Gulutzan I’m showing McDavid videos of him shooting and encouraging him to get back to firing the puck. When he does I expect Oilers PP will start scoring at the rate they are accustomed to.
— And at some point RNH needs to score a power play goal. He has zero PP goals in 114 minutes of PP time. He has 14 assists, but only two in December. He needs to be more of a factor on the man advantage. Last year in 218 PP minutes he had nine goals, so I don’t buy the suggestion he is just a passer on the powerplay. He needs to start scoring like he did last year.
— In their first 20 games Edmonton averaged 3.05 PP opportunities/game, and in December they were at 3.10. So it isn’t a lack of opportunities. And in case you are wondering, the Oiler PK averaged 3.10 PK/game in first 20 games and was down to 3.00 in December.
— I’d really want to say THANK YOU to all the companies who donated packages for the Month of Giving and to all those who bid on packages, or just made donations during our Pyramid of Giving days. It was great to have so many listeners and readers get involved this year. We raised an amazing $153,550 in 17 days. Awesome. That pushes our total to almost $1.1 million raised in 11 years. We are at $1,098,849. Words aren’t enough, but thank you, thank you, thank you. You’ve helped many families and individuals in need. Bless you.
— I want to wish you all the best in 2022. Thanks for reading and commenting on my articles. I truly appreciate it. Happy New Year.