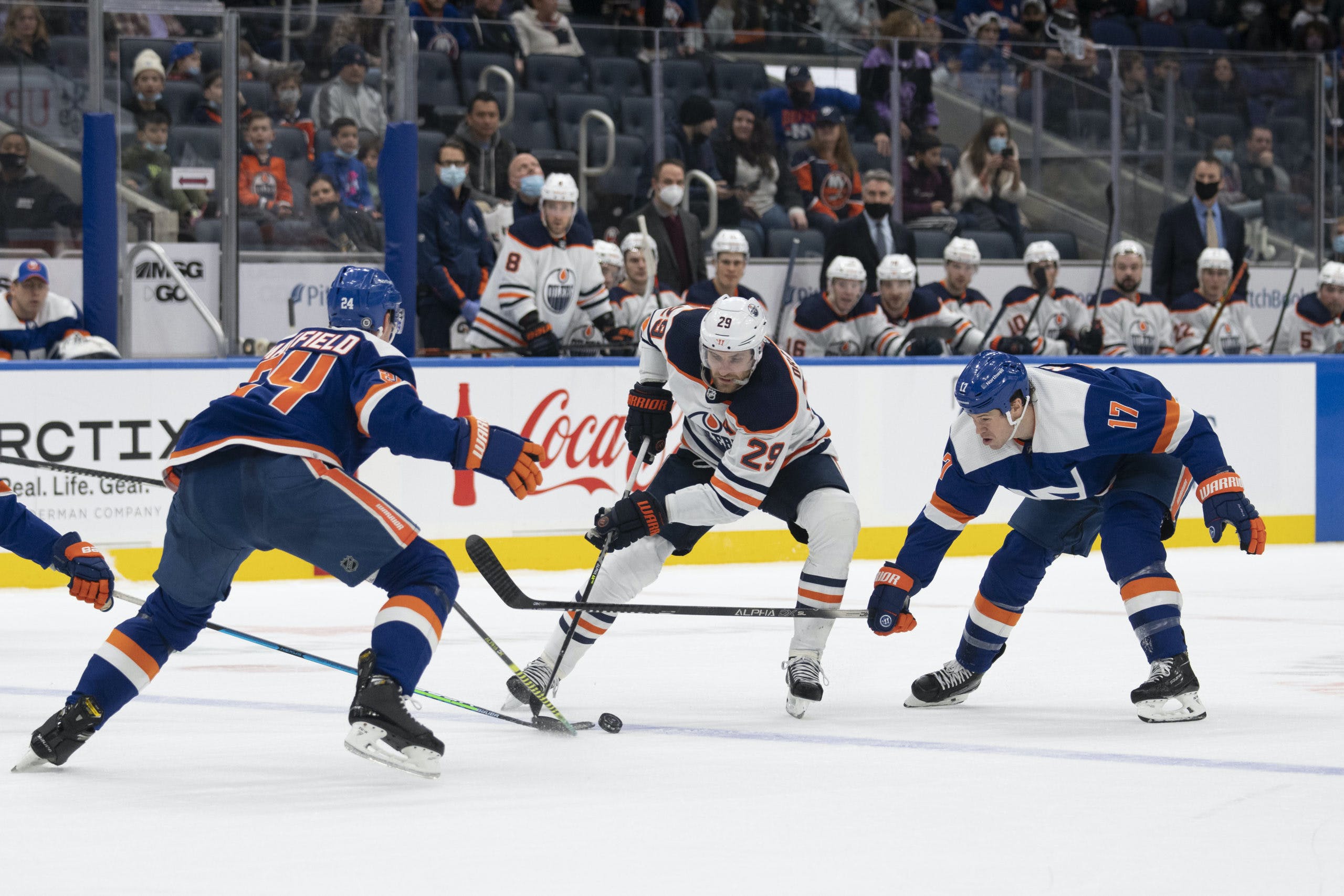 By Jason Gregor
2 months ago
Through 19 games the Oilers have yet to find a consistent defensive game. Even when they won five games in a row, they had two games where they allowed four and five goals against. Their entire team has struggled to find consistency in their own zone, and they need to wake up and play smarter and with more conviction.
— Their willingness to play Santa Claus and gift easy goals to the opposition needs to stop. Stuart Skinner has played very well this season, but his miscue gave the Devils a 2-1 lead and changed the game significantly. “That’s a tough one,” Skinner said. “If that didn’t happen, who knows. I definitely needed to make a better play.”
Skinner is far from the issue, however.
— Edmonton gives up the blueline too easily and too frequently. The Devils’ fourth goal was a prime example as they allowed the Devils easy access into the zone, and then Barrie turned the wrong way which allowed Tomas Tatar to go untouched to the net and bat home the insurance goal.
— I thought Darnell Nurse played the Devils opening goal far too loosely. He just backed in and left Jesper Bratt wide open. I realize it is on the penalty kill, but Nurse didn’t need to back in so deep and leave so much space in the slot. There was no threat for the Devils to attack around the net as they entered. The D-men are backing more than they should.
— The Oilers’ defensive woes have been an issue all season, and it isn’t just the goaltenders and defenceman. It is a complete team effort, and the entire team needs to play better. Adding one new D-man via a trade won’t solve all the issues. That is the easy suggestion, but not the solution. Over their final 38 games, last season the Oilers had the sixth-best GA/GP at 2.76. They outscored team 93-73 at 5×5 and had the fifth-best GF%. They had solid goaltending with a .922Sv% at 5×5. They limited chances of the rush and cycle and forwards helped out with consistent back pressure.
In 19 games this season the Oilers aren’t close to that.
— They are 28th in GA/GP at 3.63. They have been outscored 43-33 at 5×5 (27th in GF%). They are 18th in 5×5 SV% at .913. Sure, it would be great to get some depth scoring, but scoring isn’t the main issue for Edmonton. Limiting goals is. Edmonton only has four players who have been on the ice for more goals for than against at 5×5. Kailer Yamamoto (9-5), Devin Shore (3-2), Evander Kane (10-7) and Markus Niemelainen (5-4). Due to injuries and playing time they rank 12th (Kane), 14th (Yamamoto), 17th (Niemelainen) and 18th (Shore) in 5×5 TOI.
— The entire team is allowing too many goals against.
— The team needs to reduce their turnovers, make smarter reads, manage the puck better, and not be passive and allow the opposition to gain the zone so easily. They also need to protect the slot, and inner slot better.
— The Islanders are still a solid defensive team, but their offence is much improved from last year. They were 23rd in GF/GP last year (2.79), but this year they are scoring a half a goal more per game and sit 12th in GF/GP at 3.30. They don’t have a dominant offensive star, but Mathew Barzal (22 points in 20 games) and Brock Nelson (20 in 20) are consistent producers. They have nine skaters with 4+ goals.
— Edmonton has given its opponents too many easy goals lately. “You want to make sure that the other team beats you, not you beating yourself. Tonight, I thought we made too many self-inflicted errors,” said head coach Jay Woodcroft after Monday’s loss. The losses will keep occurring, if the Oilers don’t tighten up their defensive structure.
Editorials
Featured
Oilers Talk
Recent articles from Jason Gregor