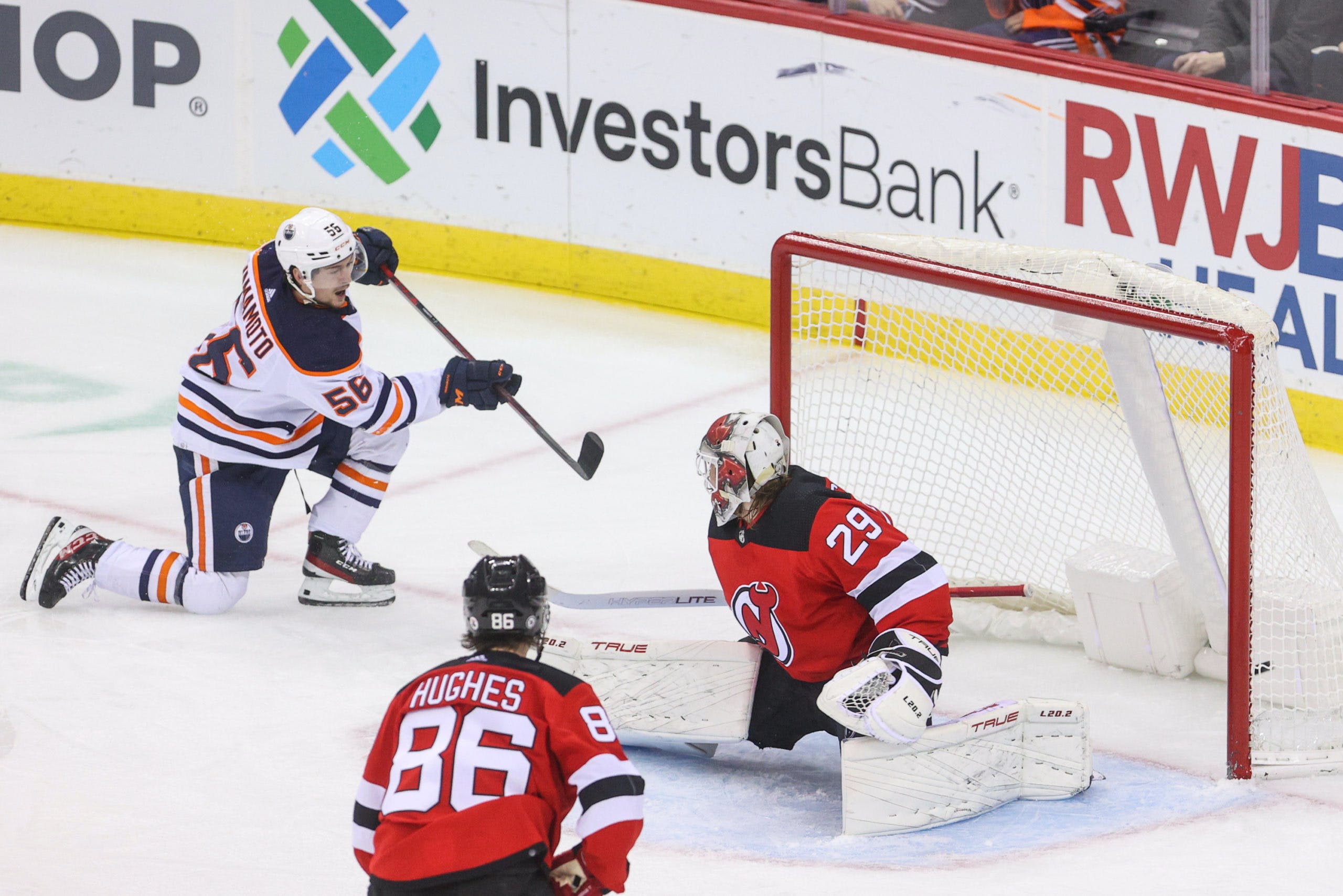 By Jason Gregor
1 month ago
The New Jersey Devils and Edmonton Oilers haven’t had much of an on-ice rivalry in the 41 seasons the Devils have been in New Jersey. The most memorable moment between these two organizations occurred on November 19th, 1983, when Wayne Gretzky ripped the Devils after defeating them 13-4. Gretzky produced the first eight-point game of his career, but it came against one of his good friends, Devils goaltender Ron Low, and Gretzky didn’t hold back his criticism of the Devils organization.
“How long has it been for them? Three years? Five? Seven? Probably closer to nine. Well, it’s about time they got their act together. They’re ruining the whole league. They better stop running a Mickey Mouse organization and put somebody on the ice. I feel damn sorry for Ron Low and Chico Resch,” Gretzky told Dik Chubey. It might have been the only time Gretzky said anything remotely aggressive, although he was correct in assessing their quality of play. He did issue an apology to the Devils the next day, but it did ignite a rivalry for a brief time. The Oilers played in New Jersey two months later on January 15th, and it was Mickey Mouse night. Fans showed up wearing Mickey Mouse ears and sweaters and held many signs. The game was competitive, and the Oilers won 5-4.
But that is the extent of any rivalry between the two teams. Geography plays a factor, but the main reason is the teams have rarely been good at the same time.
— The last time both teams made the playoffs was in 2006. New Jersey lost to Carolina in the second round while the Oilers lost to the Hurricanes in the Cup Final. The only other seasons where both teams won a playoff series was 1997, when they each won one, and in 1988 when the Oilers won the Cup and the Devils lost in the third round to Boston (the Devils upset the Islanders and Capitals in the first two rounds).
When the Oilers were one of the top teams in the late 1980s and early 1990s the Devils hung out on the fringes of making the playoffs, and when the Devils became a force in the mid-1990s to the early 2000s the Oilers were the team fighting to gain the seventh or eighth seed (or missing the playoffs). In 1988 Edmonton had 17 more points than the Devils, and in 1997 the Devils had 21 more than the Oilers.
— The only season where both made the playoffs and were within six points of each other was 2006. New Jersey had 101 points and Edmonton finished with 95. They only met one time that season and New Jersey won 2-1 in a shootout. It was not an entertaining or energetic game.
— These clubs aren’t rivals, and likely will never be, but for now, both teams are competitive, and tonight’s game should be entertaining. The Oilers and Devils have identical 7-3 records after 10 games. They are tied for the third most points in the NHL with 14. Edmonton sits third in GF/GP at 4.10 and New Jersey is seventh at 3.60. Connor McDavid and Leon Draisaitl are first and second in league scoring with 22 and 21 points, while the Devils’ Jesper Bratt is fifth with 16.
— The Devils don’t give up much defensively. They are third in GA/GP at 2.50 and have yet to allow more than 25 shots on goal in a game. Philadelphia had 25 shots in the Devils’ first game, and since then the Devils have allowed 22, 20, 17, 22, 22, 22, 24, 21 and 23 shots against.
— The Devils are killing teams on the shot clock. Here are their SF-SA from each of their first 10 games: 37-25, 39-22, 41-20, 43-17, 36-22, 41-22, 41-22, 23-24, 53-21 and 37-20. They’ve been outshot once, but they’ve outshot opponents by an average of 19.3 in their other nine games. On the season they’ve outshot teams 39.1 to 21.8.
— The Devils have been dominant defensively and offensively thus far. 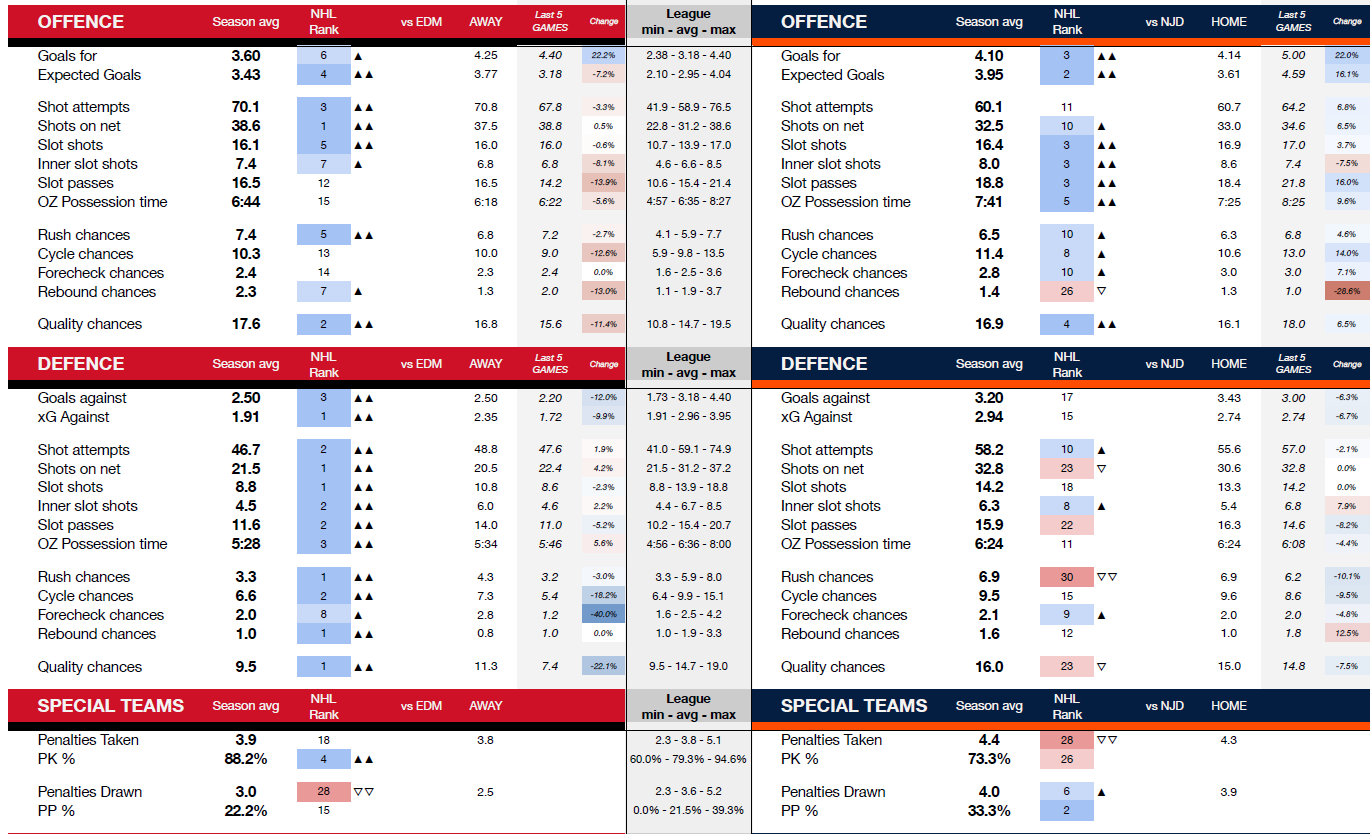 — The Devils have been very good, but they’ve also only played two teams that made the playoffs last year. They defeated Colorado 1-0 and lost to Washington 6-3. However, they are 7-1 in their last eight games and have outscored teams 32-14, and six of those goals against came in the loss to Washington. They might not have played great teams, but they have dominated them in possession time and on the scoreboard.
— Edmonton has played seven teams who made the playoffs last year and are 5-2 against them. The Oilers have won five in a row and have outscored teams 25-15 in that run.
— Edmonton hasn’t been as tight defensively as New Jersey. The Oilers sit 23rd in quality chances against at 16 per game, while the Devils lead the NHL allowing only 9.5. But the Devils have not faced an offence like the Oilers this year.
— Edmonton has the most explosive top-six in the NHL right now. Currently, 37 forwards have 11+ points, an average of 1.15 per team. The Oilers have five in McDavid, Draisaitl, Ryan Nugent-Hopkins, Evander Kane, and Zach Hyman.
Colorado and Toronto have three.
Boston, Buffalo, Dallas, Detroit, LA, Minnesota, New York Rangers, Ottawa, Pittsburgh and Tampa have two.
Anaheim, Carolina, Florida, Montreal, New Jersey, New York Islanders, Philadelphia, San Jose and Vegas have one.
And 10 teams have none (leading scorer totals in parenthesis): Arizona (10), Calgary (10), Columbus (8), Chicago (10), Nashville (10), Seattle (10), St. Louis (9), Vancouver (10), Washington (9) and Winnipeg (8) have none.
— Which leads to McDavid’s 11 goals through 10 games.
— This should be a good matchup between the Oilers’ power play and the Devils’ penalty kill. Edmonton is fourth in PP chances/game at 3.90, they are second in PP efficiency at 33.3%, and first in PP goals with 13. New Jersey has the fourth best PK at 88.2% and is fourth in PP goals allowed with four. They sit 14th in times shorthanded (TS) at 3.40/game.
— The Oilers get many power plays, but they are tied with Dallas for most TS/game at 4.50. Part of that is due to being shorthanded 18 times v. Chicago and Vancouver. In their other eight games, they are averaging 3.37 TS/game, but in 20% of their games they’ve been in the box way too much.
— The Oilers’ penalty kill is their main weakness right now. It is 73.3% allowing 12 goals on 45 kills. They’ve only had one game where they didn’t allow a power play goal. They’ve only had two games above 80%. It isn’t one bad game that has skewed their early season numbers. They can’t stop bad power plays. The Predators skated into Edmonton with the 30th-ranked PP two nights ago. Nashville promptly went 2-for-2 and improved their PP% from 8.5 to 13.2. Improving the PK has to be a focus, but it won’t be easy. You can’t just flip a switch and be good. The killers likely aren’t that confident right now and they step on the ice thinking “don’t get scored on,” instead of “we’ll kill this off.” They need better goaltending, more active sticks to disrupt the passing lanes, harder clears, and RNH, Ryan McLeod, and Derek Ryan need to win more faceoffs. They are a combined 8-25 in the dot.
— I’d start Stuart Skinner tonight for a variety of reasons. Jack Campbell has started seven of the first 10 games, which puts him on pace to start 57 games. That is too many. If Skinner starts, on average, four of every 10 games he’ll finish the season with 31 starts and Campbell would be at 51. I could see stretches where Skinner and Campbell each start five games.
The other reason I’d start Skinner tonight is he is playing more consistently right now. That doesn’t mean he will be in a month or two because goaltending is highly unpredictable. Last season 26 goalies started 40 games — yes, only 26 — and 17 of them had .910Sv% or higher.
Thatcher Demko had a .915Sv% last year, but he’s at .876 in eight games this season.
Jack Campbell was a .914 last year and sits at .881 this year.
Jacob Markstrom was .922 last season and .903 so far this season.
Andrei Vasilevskiy was .916 last year and .902 this campaign.
Tristan Jarry was .919 last year and is .904 now.
Then others have improved significantly.
Connor Hellebuyck was .910 last year and is .931 this year.
Carter Hart was .905 last year and sits at .943 so far this season.
Ilya Samsonov was .896 last year and is .920 early on.
Outside of a few truly elite goalies, we often see big changes from the rest, often year-to-year. Campbell has played great for stretches but also has struggled with his rebound control. Right now, Skinner looks more comfortable and poised so I’d ride him a bit while he’s hot. Hopefully for him, it lasts all season, but history tells us that is unlikely.
Campbell hasn’t played as well as he’d like, but he’s winning and that is ultimately what matters early in a season. Edmonton doesn’t have a goalie controversy, but rather a goalie competition, and Oilers fans should be excited about it.
— Doors open at 5 p.m. tonight because the Oilers Hall of Fame induction ceremony for Lee Fogolin and Ryan Smyth begins at 6 p.m. For those watching at home, Sportsnet will show the ceremony live-to-tape starting at 7pm.
Editorials
Featured
Oilers Talk
Recent articles from Jason Gregor