By Jason Gregor
3 months ago
Tonight will be the 10th head-to-head meeting between Sidney Crosby and Connor McDavid. McDavid has dominated the individual matchup, while the Penguins have won the majority of games. Edmonton is 3-3-3 in those games, while the Penguins are 6-2-1 (perfect example of why the loser point makes things look better for the losing team). Edmonton has actually outscored Pittsburgh 26-24 in those games, and McDavid has been heavily involved.
— In their previous nine meetings McDavid has produced 5-13-18 while Crosby has 2-3-5. McDavid has dominated Crosby head-to-head, and Edmonton is hoping that continues tonight. The Oilers have won the last two meetings and McDavid scored 1-3-4 in each victory with Edmonton winning 5-1 and 5-2.
— Both superstars are off to great starts this season. McDavid and Crosby each have 10 points in five games and watching them go head-to-head tonight should be great. McDavid is 10 years younger and is playing over five more minutes per game. Part of that is due to the Penguins having leads in most of their games and not trying to tie the game in the third period.
— The Penguins have arguably been the most dominant team early this season. They are 4-0-1. They lead the league with 5.20 goals/game and they are fourth best in goals against/game at 2.20. They’ve outscored teams 26-11. They defeated LA 6-1, Arizona and Tampa Bay 6-2, Columbus 6-3 and lost to Montreal 3-2 in overtime.
— The Penguins have six forwards — Crosby, Jake Guentzel, Danton Heinen, Evgeni Malkin, Bryan Rust, and Kasperi Kapanen — averaging at least one point per game. Eight skaters have at least two goals and 14 have scored once. They have 18 skaters with at least one point. Chad Ruhwedel only played one game and he didn’t score a point in his 9:28 of ice time. Every skater is chipping in offensively and playing sound defensively.
— Conversely, Edmonton has three skaters at one point/game in McDavid, Leon Draisaitl, and Ryan Nugent-Hopkins. They have five players with two or more goals, eight skaters with one goal and 12 skaters with at least one point. Edmonton is 14th in GF/game at 3.20 and 23rd in GA/game at 3.40. The Oilers played much tighter defensively v. St. Louis on Saturday and will need the same defensive awareness tonight. Tough break for the Penguins who will be without Jake Guentzel for a second straight game.
— Sidney Crosby is 19th all time in scoring and should be 15th before the end of this season. Crosby is 502 points behind Jaromir Jagr for second all-time. If Crosby scores 90 or more points this season, he will be 410 points shy of Jagr. I can see him playing another five seasons, maybe more, and if he does, he has a legit shot to pass Jagr. 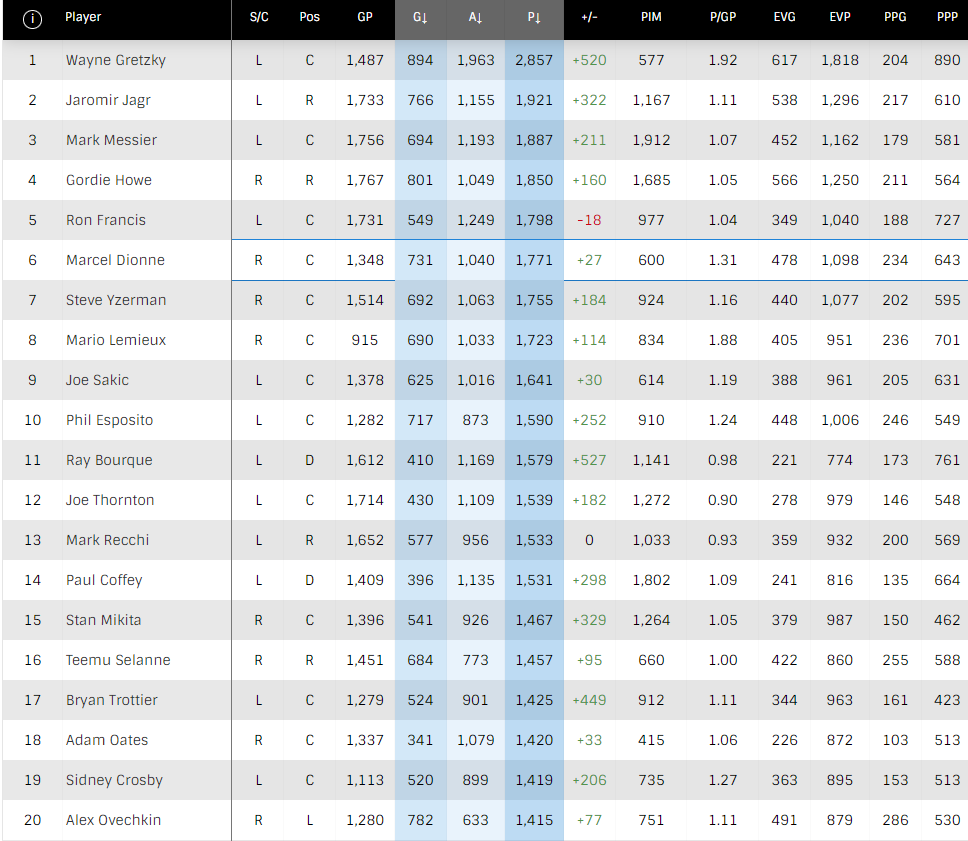 — And then in 10 years, if he doesn’t have any injury issues, we will be talking about McDavid pushing to catch Crosby. Elite players are maintaining their elite level of play longer than ever before due to the advanced education on equipment, training, rest, nutrition, sports psychology, and more. It is great for fans because the truly elite players are able to play at an elite level longer than ever before.
— Edmonton and Pittsburgh are struggling on the penalty kill. The Penguins are 23rd at 73.7% and Edmonton is 24th at 72.7%. The Pens have allowed five PP goals on 19 kills, while the Oilers have allowed six on 22. Edmonton is tied for second with two shorthanded goals. The Oilers PP is fourth best at 35.3% (six goals on 17 chances) and the Penguins PP is 10th at 26.3% (five of 19).
— Former Edmonton Oil Kings, Tristan Jarry, is off to a great start in goal for the Penguins. He is 4-0 with .941Sv% and 2.01 GAA.
— The Penguins have done a great job limiting chances around the net. They’ve allowed the third-fewest inner slot shots and second-fewest passes to the slot and the sixth-fewest rebound chances. 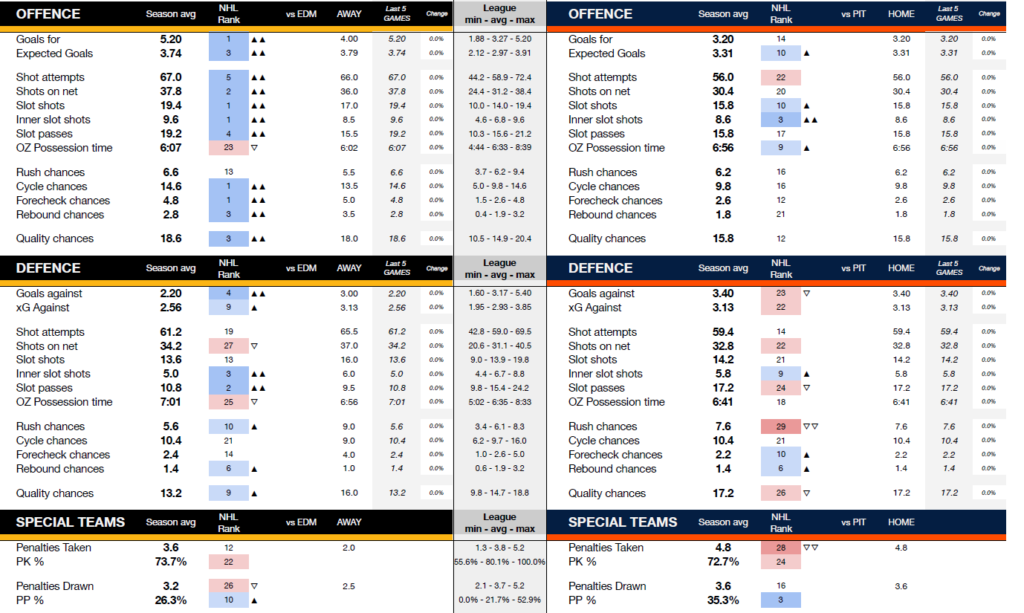 — Edmonton can’t be one-and-done offensively tonight if they want to score on Jarry. They need to get to the net, stay there, create traffic, and out battle the Penguins defenders in tight.
Edmonton has been around the net a lot thus far. They are third in inner slot shots, and that isn’t because of the power play. The Oilers are 30th in PP time on ice. They are 21st in PP chances/game, but their PP is good and often scores early on the man advantage so their overall PP TOI is low. They’ve only had 22 minutes of PP time this season. They’ve done a good job of creating shots from the inner slot (most dangerous area), they just need to bury more of them.
Editorials
Featured
Oilers Talk
Recent articles from Jason Gregor