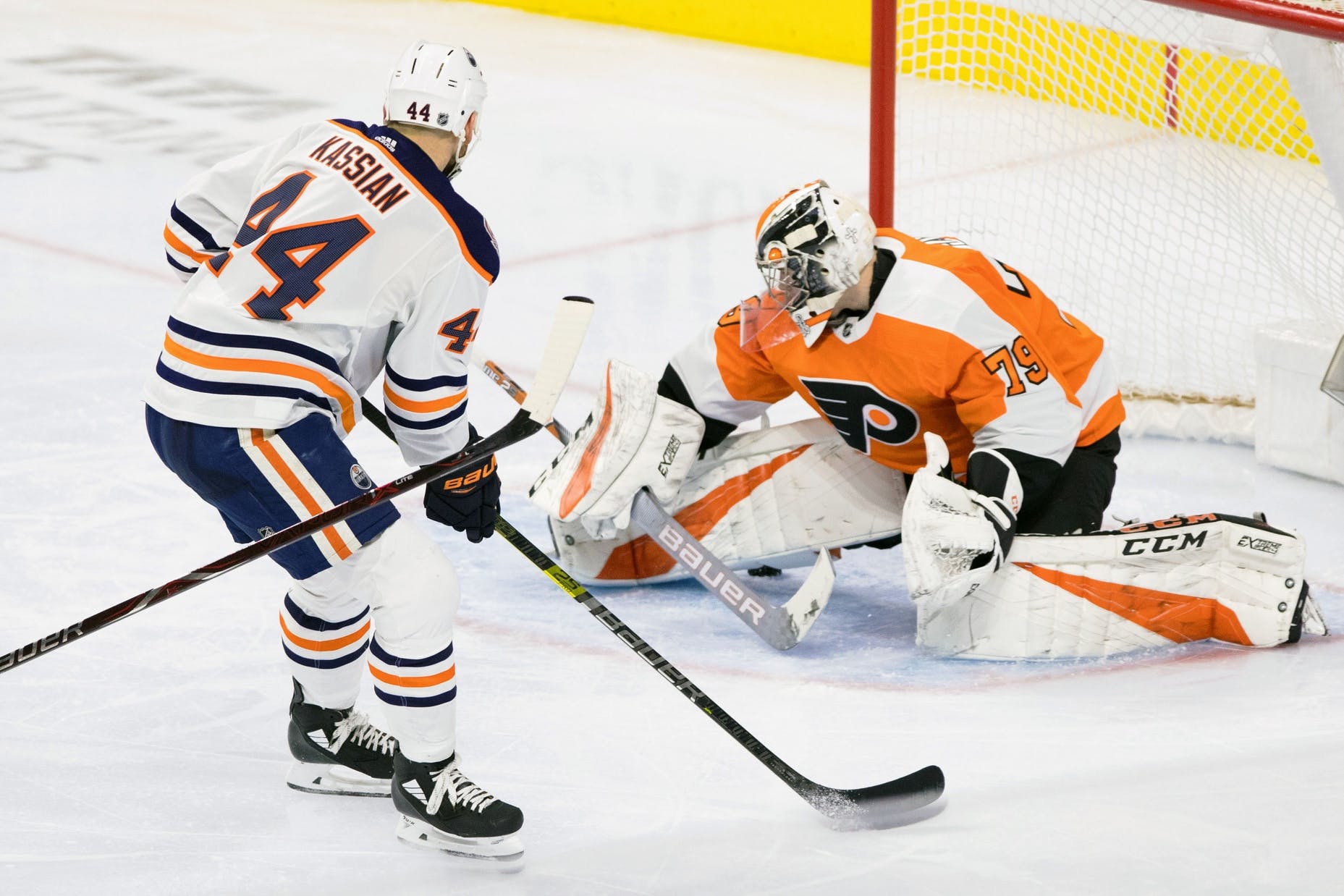 By Jason Gregor
1 year ago
After four days off which consisted of golfing, watching an NFL game and having two practices, the Edmonton Oilers look to extend their season-opening winning streak to six games tonight against the Philadelphia Flyers.
— The Flyers are also well rested. Their last game was Saturday v. Florida. The Flyers are 2-1-1, yet they are in the basement of the ultra-competitive Metropolitan division.
— The Oilers have six skaters averaging one point per game, while the Flyers have eight. Edmonton is averaging 4.6 goals/game (23 in five games) while the Flyers have scored 4.5 goals/game (18 in four games). There is no shortage of offensive confidence on either roster.
— The NHL has seen 42 different teams start a season 5-0, and four of them happened this season. It is the first time in NHL history four teams started 5-0 in the same season. On Monday night, Florida became the 25th team to start the season 6-0. Only six times in NHL history have two teams started 6-0 in a season, and only once have two teams started 7-0 (Toronto and New Jersey in 1993/1994).
— Edmonton can improve to 4-0 on home ice with a win. The franchise record is six consecutive home wins from the start of the season. They’ve done it three times with the most recent coming in 2006/2007.
— The last time the Oilers won six games in a row was December 2nd to 14th, 2015. They did it in 2011, also in 2002 and set the franchise record with nine consecutive wins in 2001. It has only happened four times in the 2000s — twice in the 1990s and 12 times in the 1980s. I wouldn’t scoff at a six-game winning streak if they happen to pull it off tonight.
— Darnell Nurse’s next point will move him into seventh place all-time on the Oilers defenceman scoring list with 161 points. He needs 29 points to pass both Janne Niinimaa and Randy Gregg who have 188 points. He likely will pass Steve Smith for fourth next season, but it will be a few more years before he catches Charlie Huddy (368) and Kevin Lowe (383). He isn’t catching Paul Coffey (669).
— Nurse needs two goals to move ahead of Steve Smith (46) and into fourth place on the all-time goal scoring list for Oilers defenders. He will surpass Lowe (74) and Huddy (81), but catching Coffey (209) would require him to average 18 goals/season for the next nine years. I don’t see it, but being second behind one of the best offensive D-men in NHL history isn’t that bad.
— I had an enjoyable conversation with Evan Bouchard on my TSN 1260 radio show earlier this week. It was funny how a few fathers listening to the show texted in saying Bouchard sounds like a guy you’d let your daughter date. Despite looking older than he is, he said he never tried to buy beer prior to turning 18. He joked he would have been too nervous. And it turns out he is just as calm behind the wheel of his car as he is on the ice. He’s never had a speeding ticket. But he did have many parking tickets because “I couldn’t read the signs in Sweden,” he said. You can listen to the entire interview here. It was a mix of hockey talk and off-ice topics.
— Did you know Connor McDavid has the fourth highest assist/game average in NHL history (minimum 300 GP) at 0.94 assist/game? Only Bobby Orr (0.98), Mario Lemieux (1.13) and Wayne Gretzky (1.32) are higher. McDavid has averaged 1.29 assists/game since the start of last season and he’s averaging 1.13 assists/game since the start of the 2019/2020 season with 142 apples in 125 games.
— Only 11 players in NHL history have recorded 90+ assists in a season. Gretzky did it 13 times, Lemieux (5), Joe Thornton, Adam Oates and Bobby Orr (2) and Paul Coffey, Ron Francis, Doug Gilmour, Pat Lafontaine, Peter Stastny and Steve Yzerman did it once.
— Only three players had 100 assists in a season. Gretzky did it an amazing 11 times, while Lemieux (114) and Orr (102) did it once. McDavid was on pace for 105 assists last season. I think 100 is attainable and will be something to watch for when April rolls around.
— McDavid’s 72 assists in 56 games last season was the 11th highest assist total in a season since 2000.
Thornton had 96 in 2006 and 92 in 2007.
Nikita Kucherov 87 in 2019.
Sidney Crosby 84 in 2007.
Henrik Sedin 83 in 2010.
Evgeni Malkin 78 in 2009.
Peter Forsberg 75 in 2003.
H. Sedin 75 in 2011.
McDavid 75 in 2019.
Marc Savard 74 in 2007.
McDavid 72 in 56 games in 2021.
The lowest GP among the others was 75 games for Forsberg. McDavid seems destined to have an historic season.
— Courtesy of SportLogiq, here is a look at where the Oilers and Flyers rank offensively and defensively. 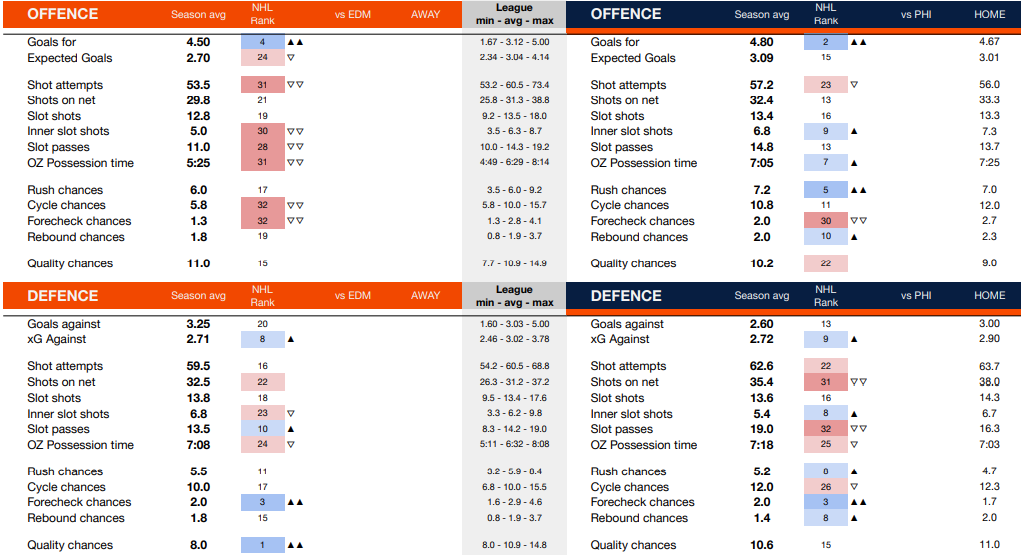 It is interesting to note how low the Flyers rank in shot attempts, inner slot shots, Oz possession, cycle chances and forecheck chances, yet they’ve scored 18 goals. They have a league-best 15.5 team SH% overall and they are third at 5×5 with a 13.4Sh%. They are on a heater, and while the odds say the Sh% will drop, you don’t know when. Edmonton has to be leery of a group with confidence. Of course the Flyers need to be leery of the Oilers offence as well. They are top-10 in five categories.
— Defensively the Oilers are top-10 in five categories (xG against, Inner slot shots, rush chances, forecheck chances and rebound chances), but they are bottom-10 in five categories as well: Shot attempts, shots on net, slot passes, OZ possession time and cycle chances.
They allow a lot of slot passes, but not many shots from the inner slot. That is something to watch. Are they simply collapsing quickly on the shooter and not allowing shots through? Or are they allowing passes into the slot where the recipient isn’t in a position to shoot?
— Currently, the Flyers are first in allowing low quality chances, while the Oilers are 22nd in producing quality chances offensively. Will Philly be able to limit Edmonton’s quality chances?