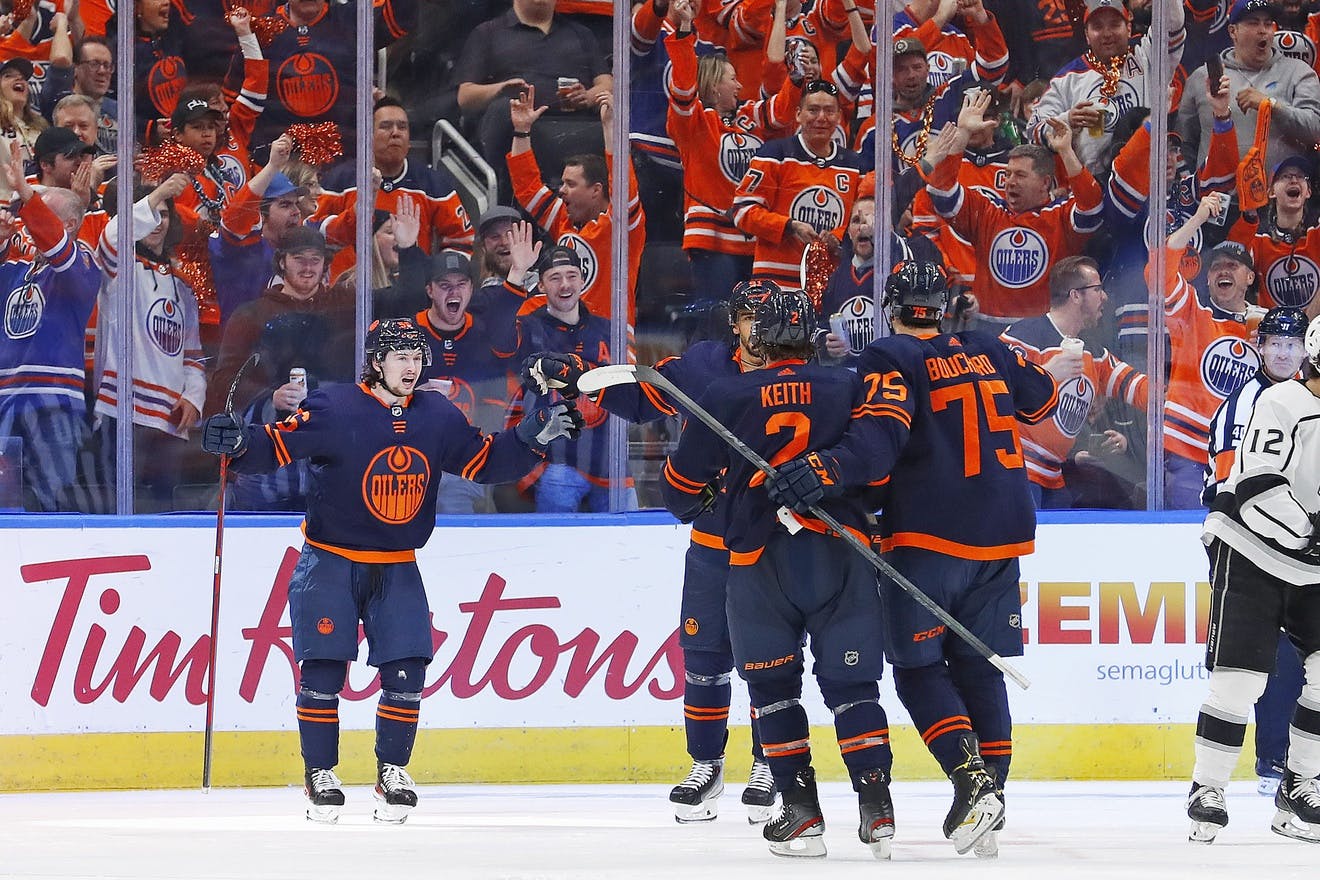 By Jason Gregor
9 months ago
Kailer Yamamoto is always smiling. His youthful exuberance and fun-loving personality make him a popular teammate. But when the game starts his on-ice persona is much different. He becomes Kailer Ratamoto.
Despite his diminutive size, Yamamoto has become extremely annoying to play against.
He’s always around the puck, he hounds opposing players and according to his linemate Leon Draisaitl, Yamamoto possesses a skill set very few players have.
“He plays inside guys. He gets in their equipment, sometimes under their legs (smiles),” said Draisaitl with a subtle jab to Yamamoto’s height. Make no mistake: Draisaitl enjoys and respects how Yamamoto plays.
“I couldn’t play how he does for a full season.”
And Yamamoto is the most annoying type of rat — a skilled rat. He just had his first 20-goal, 40-point season and produced 1-1-2 in game one v. the Kings. He annoys opposing players with his relentless pursuit of the puck, which is often followed by a devilish grin.
The fact Yamamoto plays such an aggressive game is surprising considering he’s only 5’6″ and 155 pounds. He uses his lack of size to his advantage. He has great balance and low centre of gravity and that allows him to win puck battles against bigger players regularly.
“I try to get in guy’s equipment,” said Yamamoto. “It is difficult to play when you are in there and you are getting them a little pissed off. That is what I try to do. I learned from last year (playoffs) not to get too high or too low. I was so amped up and I wanted that physicality all the time that I forgot about the puck. This year I’m trying to still play that way, but focus on the puck more. You can’t score if you don’t have the puck.”
Was Yamamoto too amped up early in game one when he took an unnecessary penalty?
“I definitely think so,” he smiled. “That was the first time I played in front of the fans in the playoffs. The fans were unbelievable. I don’t think I’ve seen better fans anywhere I’ve played before. The intensity got the best of me in that moment.”
But he calmed down and was one of the Oilers’ most effective forwards the rest of the game. “Calmed down” might be misleading. He just became more controlled, because he was still aggressive and was involved all game. He scored a goal, added an assist, had four shots on net, two hits and played 3:04 on the PP and 1:14 on the PK. Jay Woodcroft uses him in every situation.
Yamamoto has spoke often about how competitive he is. He needed to be at a young age because he was always the smallest player on his team. Playing against bigger players is normal for him. He isn’t intimated. The heightened physicality of the playoffs is something he relishes and believes he can excel in. He also spoke openly about how he views the one-on-one battles of the post-season.
“I think what comes around goes around. If I’m going to take one I’m definitely going to be looking to get somebody back,” said Yamamoto.
Spoken like a true rat.

Kane – McDavid – Puljujarvi
Hyman – Draisaitl – Yamamoto
Archibald – RNH – Ryan
Foegele – McLeod – Kassian
Nurse– Ceci
Keith – Bouchard
Kulak – Barrie
Smith
Josh Archibald will start on a line with Ryan Nugent-Hopkins and Derek Ryan, and Kris Russell comes out as Woodcroft will go 12 forwards and six defencemen.
Archibald received a medical exemption from his cardiologist, which means he is eligible to travel with the team and is available for every game. Woodcroft inserted him into the lineup because he likes his speed, physicality, and ability to kill penalties.
Woodcroft used five of his top-six forwards on the PK in game one, and he’d like to reduce that burden a bit. Inserting Archibald in the lineup illustrates Woodcroft wants the Oilers to be more aggressive on the forecheck tonight and try to wear down the smaller, inexperienced blue line of the Kings. It is why Archibald and Kassian are starting on separate lines. Woodcroft wants a physical presence on both bottom-six lines.
And speaking with Woodcroft, the coach was not disappointed in Jesse Puljujarvi’s game. His low minute totals were more circumstantial than how he played. With so much PP and PK time, and two minutes of 4×4, that was almost 1/3 of the game that Puljujarvi isn’t involved in. The coach would like Puljujarvi to finish more, but he felt the rest of Puljujarvi’s game was fine.

Athanasiou – Kopitar – Kempe
Moore – Danault – Iafallo
Grundstrom – Lizotte – Brown
Lemieux – Byfield– Kaliyev
Anderson – Roy
Edler – Durzi
Maatta – Spence
Quick
The Kings’ second line dominated at 5×5 in game one and they will need more of the same tonight. The Oilers will try to be more physical on the Kings’ defence. The Kings have blueliners with a combined four NHL playoff games. Edmonton will still be a possession team, but I expect them to chip and chase more tonight and that is why Archibald is in. 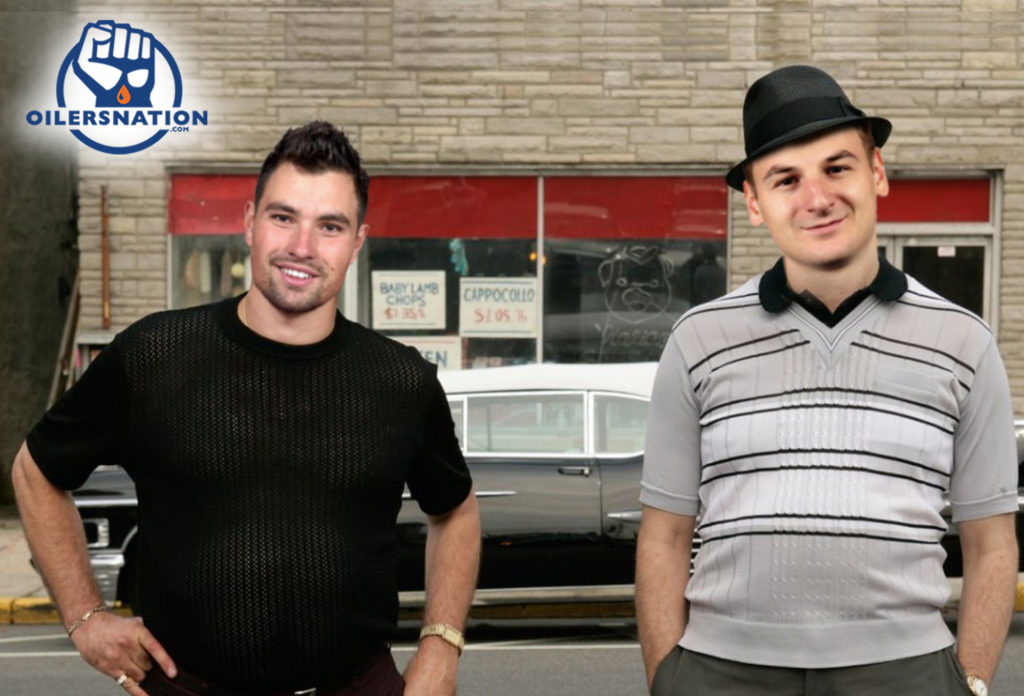