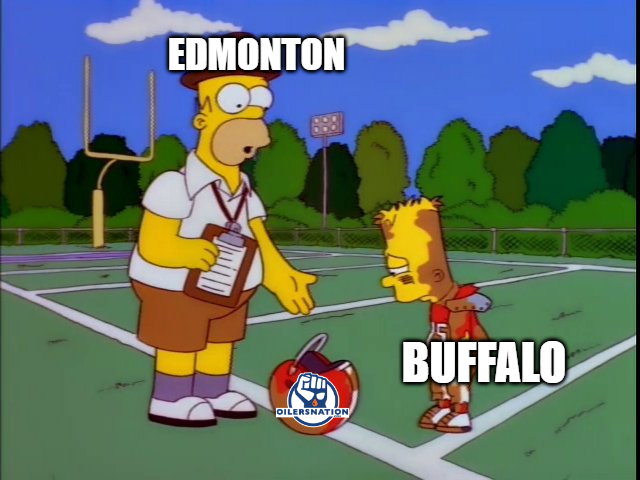 By Zach Laing
8 months ago
That might’ve been the most boring 6-1 victory I’ve ever seen, but how sweet it is.
The Edmonton Oilers came into game four of this five-game home stand knowing that their chance at making the playoffs very well was lying in the wake. Washington, Tampa Bay, Detroit, and Buffalo tonight were no slouches. The first two are among the best out east, and the latter two — while bottom-feeder teams — have been tough to play against and have eked out some big wins.
And Edmonton took nobody lightly. They won the first two with a big comeback win against Washington and a strong performance against Tampa Bay. Detroit was a gutsy win, while tonight’s game against Buffalo… well, it went about as you would’ve hoped.
Edmonton basically dominated all night long keeping Buffalo to the outside in the Oilers’ end all night. In Sabres’ end, however, the Oilers dominated. They controlled offensive possession for the overwhelming majority of the night and it showed. The Oilers scored when they needed to and put on an absolute defensive clinic.
Mike Smith allowed just one goal, a medium danger shot that was rifled past him on a one-timer, but he didn’t face much danger. Sure, Buffalo had 28 shots by the end of the night, but according to moneypuck.com, the Sabres had exactly zero high danger shot attempts and 0.0 high danger expected goals against. He had very little to do.
All in all, the Oilers managed to walk away with one of their easiest wins of the entire season and boy, will they take it. Next up will be the New Jersey Devils coming to town for a Saturday afternoon matinee. See you there!

The Oilers didn’t seem to realize the game started at 7 p.m., but thankfully neither did the Buffalo Sabres. Leon Draisaitl, however, had the first great look just under five minutes into the first frame. Driving to the net, he took a shot short side put it pinged off the iron. Linemates Zach Hyman and Jesse Puljujarvi got a few whacks at it but couldn’t capitalize.
It was, however, Kailer Yamamoto who truly got the party started. He gained the offensive line dropping the puck to Cody Ceci, who quickly played the puck along the wall to Connor McDavid. Yamamoto got to a open spot in the high-slot and McDavid found him, and he quickly one-timed the puck into the Sabres net.
For Yamamoto, it marked the fourth straight game he’s scored a goal.
Guess who else ended up with a goal in his fourth straight game? Connor McDavid. He put in some work down low at the goal line and at the side of the net before banging in his own rebound.
All in all, it was a good first period for the Oilers. They looked a little tepid early in the game but they definitely found their stride as the period went on.
Moments like Zach Hyman at the end of the first frame working down low like a bull in a china shop was the exact type of game the Oilers played. They were strong, and they wanted to control the pace of play.
The Oilers carried it into a second period that saw them add two more tallies in thanks to Leon Draisaitl, who scored his 40th of the year, and Darnell Nurse.
Both goals were much like Hyman’s work late in the first. On Draisaitl’s goal, the Oilers lost the draw but the puck fluttered towards the Sabres’ net. Draisaitl picked it out of a pile, took it to his forehand firing a shot on net.
While the first one was stopped, the second one wasn’t. He stuck with the play and scored as he got knocked down.
Nurse’s goal, too, was some great individual effort. He fired a shot from the point that was blocked, but as Nurse stepped down towards the net the puck came to him and he was able to fire home his own rebound.
As the third period rolled around, there was no shortage of action. Buffalo got themselves on the board just under four minutes in when Victor Olofsson got to open ice and received a one-time pass he lasered past Mike Smith.
Edmonton scored two more times to extend their lead as well. Shorthanded, Tyson Barrie threw a hail mary to the middle of the ice where Devin Shore was, and he won a puck battle against a Sabres defenceman for the breakaway. Shore made no mistake rifling one home through the five-hole.
Barrie’s night continued when the Oilers were on a double-minor powerplay opportunity. He one-timed a cross-ice pass home for his first goal since November 20th.
Zach Laing is the Nation Network’s news director and senior columnist. He can be followed on Twitter at @zjlaing, or reached by email at zach@oilersnation.com.
News
Oilers Talk
Post Game
Recent articles from Zach Laing