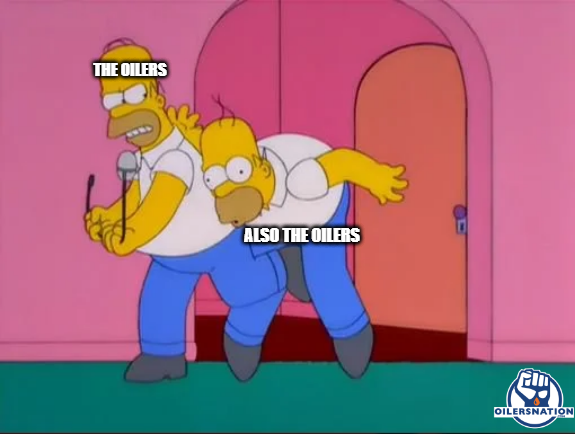 By Zach Laing
10 months ago
With the Oilersnation crew at the Saddledome for a Nation Vacation, I seriously wonder how many citizens jumped into the Hot Tub Time Machine because this game felt like one from the ’80’s. 32 seconds into the game, the first goal was scored and it only got crazier from there.
In the end, the Oilers couldn’t hold things down in the slightest. Sure, the Oilers played maybe the worst defensive game of the 15+ years I’ve been following this team, but man… it would’ve been great to see a save or two from Mike Smith and Mikko Koskinen. They allowed a combined nine goals at 5×5 last night — the first time it’s happened since at least the 2007-08 season when it could be tracked by Natural Stat Trick.
Both goaltenders were flat out terrible and the play in front of them wasn’t much better. Nobody, and I mean nobody, played a solid game in their own zone tonight for the Oilers.
It’s a true hit to the armour in what has been a great stretch for the Oilers under Jay Woodcroft. Coming into this game, the Oilers controlled an impressive 58.33 percent of the 5×5 goals scored (49-35). After tonight, that dropped to 53.68 percent (51-44).
The Oilers have a chance Monday night to rebound in a big way when they see the Arizona Coyotes come to Rogers Place in what needs to be a statement game from the Oilers. Tonight’s performance was flat out awful, and they need to find their way sooner rather than later as they continue to push for the playoffs.

Hard to argue with the start to that one, hey? Just sitting at home you could feel the electricity in the Saddledome tonight and both teams were sure up for this one. Derick Brassard did the thing jut 32 seconds into the game giving the Oilers the start they were looking for.
And right after, boy could you feel the game open right up. Milan Lucic laid a hit on Leon Draisaitl and pinballed right off the German down to the ice, while the Flames and Oilers both traded end-to-end chances. After Mikko Koskinen made two or three huge saves, Calgary was able to get one that counted.
The Oilers let Elias Lindholm behind their defence and he made a nice move to flip the puck on net. While Mikko Koskinen got a piece of it, the puck still was able to squirt past him to tie the game up at one.
With just over five minutes left in the first, things got a little hairy. Darnell Nurse kicked a puck into his own net and 15 seconds later, Kailer Yamamoto left Mikael Backlund alone all in front as the Flames took a 3-1 lead. A tough spot, no less, but Leon Draisaitl got one back. After some physical work in his own zone, he managed to break behind the Flames defence after a beautiful Ryan Nugent-Hopkins pass to make it 3-2.
Edmonton was pressing as the frame wound up, but it was Backlund who found himself on the scoresheet — only this time, it was for taking a run at Connor McDavid. He laid a cheap open ice hit on the Oilers captain when the puck was nowhere near him. Draisaitl and Evander Kane took exception, and the first frame ended with the Oilers on the powerplay.
So uh… the second period didn’t let up either as six goals were scored in the first… 9:18 of the period. Leon Draisaitl finished off his hat trick with two goals in the frame while Ryan Nugent-Hopkins went bar down on the powerplay. All the while Matthew Tkachuk scored twice and Oliver Kylington got on the board for the Flames.
Hard to recap the chaos that was, but offence was flying on all cylinders for both teams. Koskinen was pulled after the 5-4 goal, but it didn’t seem to matter a whole lot as the Flames got another on in short order.
Defence, however, was absolutely nowhere to be found. Evan Bouchard was fighting it in his own zone falling overhimself allowing Tkachuk to score his first of the frame. Not long after, Darnell Nurse continued to fight the puck too and was caught wildly out of positon on Tkachuk’s second goal of the frame.
In the third, things just got even worse. Elias Lindholm, Mikael Backlund and Dillon Dube all got on the board in thanks to more defensive zone lapses from the Oilers.
Zach Laing is the Nation Network’s news director and senior columnist. He can be followed on Twitter at @zjlaing, or reached by email at zach@oilersnation.com.
News
Oilers Talk
Post Game
Recent articles from Zach Laing