By Jason Gregor
20 days ago
Welcome to our game day content presented by NHL Odds site Betway!
Dylan Holloway has only been on the ice for 72 minutes. It is difficult for any player, let alone a rookie, to make an impact when averaging 7:17/game, but tonight he’ll start the game on the second line and should play the most minutes of his young career. Even in limited minutes, his production has been solid.
He’s played 68 minutes at 5×5, and he has two assists. That puts him fifth among Oilers forwards in points/60.
The more minutes you play the more difficult it is to maintain the same P/60, unless you’re Connor McDavid. Holloway’s biggest assets are his speed and size. He skates very well, and he’ll get a great opportunity skating alongside Leon Draisaitl and Zach Hyman tonight. I’m sure he’ll be excited and nervous. He will also be facing tougher competition than he’s used to when skating on the fourth line, so the promotion will be an adjustment.
Tonight, and moving forward, Jay Woodcroft will have to manage results with development. He wants to win, but with Evander Kane out for 3-4 months, he needs someone to step in and fill the void. No one should expect Holloway to fill it entirely, but if he can chip in with a goal here and there, be physical on the forecheck and limit key turnovers, he could get a long look. It is the NHL, so he will have to perform to stay in the top six, but considering Jesse Puljujarvi and Kailer Yamamoto’s slow starts, Holloway could get a long leash.
Yamamoto, Warren Foegele and Ryan McLeod played well as a trio v. Tampa Bay. I think it was Foegele’s best game of the season, and Yamamoto was around the puck more. I’d keep them as a trio for now and give Holloway a few games to get comfortable. He’s played 10 games, but he’s only played more than 8:30 twice, which makes it difficult to find his rhythm and offensive confidence. I don’t know if Holloway is ready to be a top-six player, but I’d like to see what he can do in that role for at least a few games.

RNH – McDavid – Puljujarvi
Holloway – Draisaitl – Hyman
Foegele – McLeod – Yamamoto
Janmark – Ryan
Nurse – Barrie
Kulak – Ceci
Murray – Bouchard
Niemelainen
Campbell
Yamamoto didn’t skate this morning, so not 100% he’ll play, but if he is, then he’ll be on the third line. Janmark and Shore didn’t stay out late for morning skate, which tells me if Yamamoto can’t go both will play. Warm up will give us a better indication of who dresses.
Jack Campbell starts, which makes sense considering how well he played in Tampa. They’d love to get him on a bit of a roll.

Terevainen – Aho – Jarvis
Svechnikov – Kotkaniemi – Necas
Martinook – Staal -Fast
Noesen – Drury – Stepan
Slavin – Burns
Skjei – Pesce
Coglan/de Haan – Chatfield
Kochetkov
Freddie Andersen was injured in practice earlier this week and Pyotr Kochetkov was recalled. Antti Raanta started last night in Florida for the Canes, so Kochetkov could make his first start of the season, and third of his career, if Andersen can’t go.
“He’s highly skilled, as most Russian goalies are,” said Kevin Woodley when I asked for a scouting report on Kochetkov. “In a small sample size, he has the worst adjusted numbers of the Carolina goalies the past few seasons. He has struggled with screens and broken plays the most, so traffic (around him) is a key part of making him uncomfortable.”
An NHL goalie coach texted me this: “Very athletic for a big goalie. Strong on his posts. He gets caught chasing the game at times and has youthful mistakes with his reads. I think he is going to be solid, just needs time and growth.”
I know Oilersnation is leery when Edmonton faces a third string goalie, and I understand why based on recent history. Edmonton needs to get traffic in front of him and make him uncomfortable early. Attack the Hurricanes like Tampa did to Edmonton in the first eight minutes on Tuesday — but score first, which Tampa didn’t do, which allowed Edmonton to gain confidence when Foegele gave Edmonton the lead on their first shot of the game almost eight minutes in. 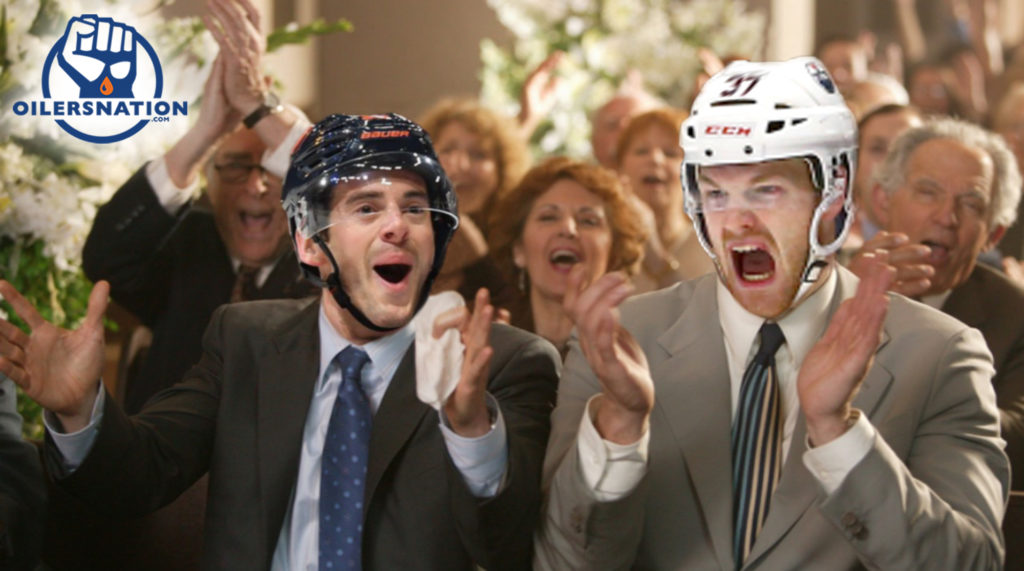 GAME DAY PREDICTION: Since the NHL changed back to playing Eastern Conference teams twice each season, the Oilers have only swept the season series once. That was the first year in 2013-14. Since then, the series has split 1-1 five times and the Hurricanes swept it twice, including last year. Edmonton gets the series sweep for the first time since 2014 with a 3-2 win.
OBVIOUS GAME DAY PREDICTION: Aho and McDavid each pick up a point.
NOT-SO-OBVIOUS GAME DAY PREDICTION: Holloway scores his first career NHL goal.
Editorials
Featured
Gameday Previews
Oilers Talk
Recent articles from Jason Gregor