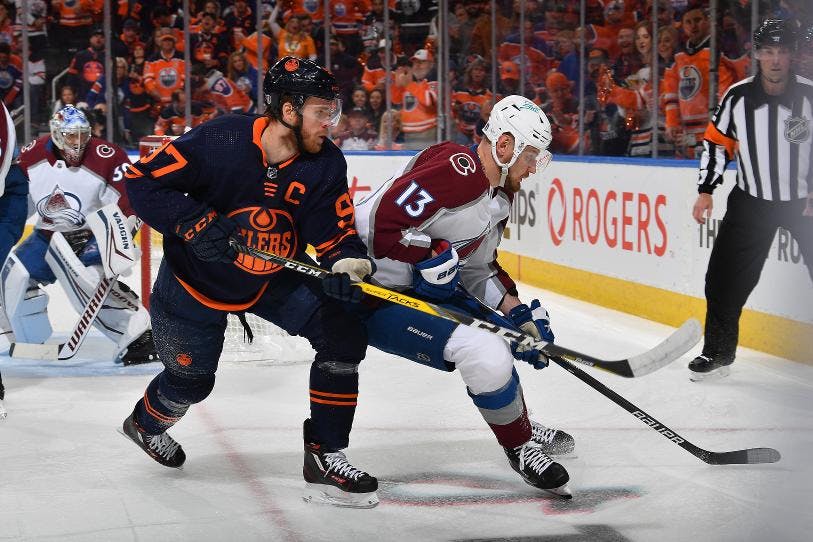 By Zach Laing
6 months ago
Heartbreaker.
If there was one game the Oilers truly deserved to win so far in these playoffs, it was game three in Edmonton. Instead, they fell 4-2 in the game, and 3-0 in the series.
Edmonton played about as good of a game as you could ask them to. In fact, they absolutely dominated play at 5×5. They controlled: 60 percent of the shot attempts, 75 percent of the scoring chances, 81.25 percent of the high-danger scoring chances and 61.63 percent of the expected goals.
But, they controlled just 33.33 percent of the goals scored. That was the killer.
Edmonton wasn’t able to bear down when it mattered most and while Connor McDavid and Ryan McLeod found the back of the net in key moments, they couldn’t get a save when they needed it.
A tough bounce on Nichushkin’s first goal that deflected off Darnell Nurse’s stick, Edmonton needed Smith to make the stops on Nichushkin’s second, or the weak Compher backbreaker.
Sure, he made some acrobatic stops throughout the game, but the truth of the matter is that he let in some weak goals. It didn’t help that on Nichushkin’s second, Duncan Keith drove early to the point while Evan Bouchard missed the goalscorer. Or that on Compher’s goal a tired Bouchard was caught out on the ice against fresh legs out of the box.
Edmonton stayed strong in moments. Like when Evander Kane took Nazem Kadri out of the game minutes in with a boarding that landed him in the box for five minutes. The Oilers killed that five minutes off.
Even come the second and into the third, the Oilers had tons of good looks.
The Oilers now find themselves in the toughest spot imaginable: a 3-0 series deficit. The silver lining in it all is that the Oilers have home ice for it, but Colorado’s a team that hasn’t lost a single game on the road in these playoffs.

If you liked chaos, then that first period was for you.
On his first shift of the game, Connor McDavid broke things right open by jumping off the bench, grabbing the puck out of a scrum and firing home the 1-0 goal. It was just the start the club needed.
But less than a minute later, things took a turn.
Evander Kane caught Nazem Kadri with a crosscheck, sending the Avs forward hard into the boards. while the later left the game, the former was sent to the penalty box for five minutes. Kadri left the game and didn’t return.
Edmonton kept up the pace all period long dominating the play at 5×5. So much so that Colorado only got one shot at 5×5, compared to the Oilers’ six.
Zack Kassian had a few good looks on the Oilers’ top line, while Mike Smith stood strong.
With just under four minutes to go in that first, Valeri Nichushkin put a pass towards the front of the Oilers net which was deflected into the Oilers net by Darnell Nurse. However, it didn’t take the wind out of the Oilers’ sails.
They kept pushing, but weren’t rewarded. Then, four and a bit minutes into the second, Nichushkin scored again. Duncan Keith had erroneously iced the puck the shift before forcing the Oilers back to their own zone. Colorado, meanwhile, was able to win the draw getting the jump when Nichushkin fired one home.
The Oilers never let up. They continued to dominate the scoring chances, but again, just couldn’t find the back of the net.
Come the third, it was much of the same. Edmonton pushed, but couldn’t get their chances. Then, it was Ryan McLeod.
Slashing from the Oilers zone through the neutral zone, McLeod walked into the Avs’ end and fired a shot upstairs on Pavel Francouz. All of a sudden, the Oilers were rewarded for their hard work and were all tied up at 2.
Three minutes later, J.T. Compher got rung up for tripping Leon Draisaitl, sending the Oilers to a powerplay where they could put the game away. As the seconds died down, Evan Bouchard walked in and rung a shot off the outside of the post. Andrew Cogliano put the rebound into the neutral zone, allowing Compher to get to as he came out of the box.
He beat out a tired Bouchard in a foot race through the neutral zone, firing a soft short through Mike Smith’s five-hole all but ending the game.
Mikko Rantanen put the game away with an empty netter.
Nation Takes
News
Oilers Talk
Recent articles from Zach Laing