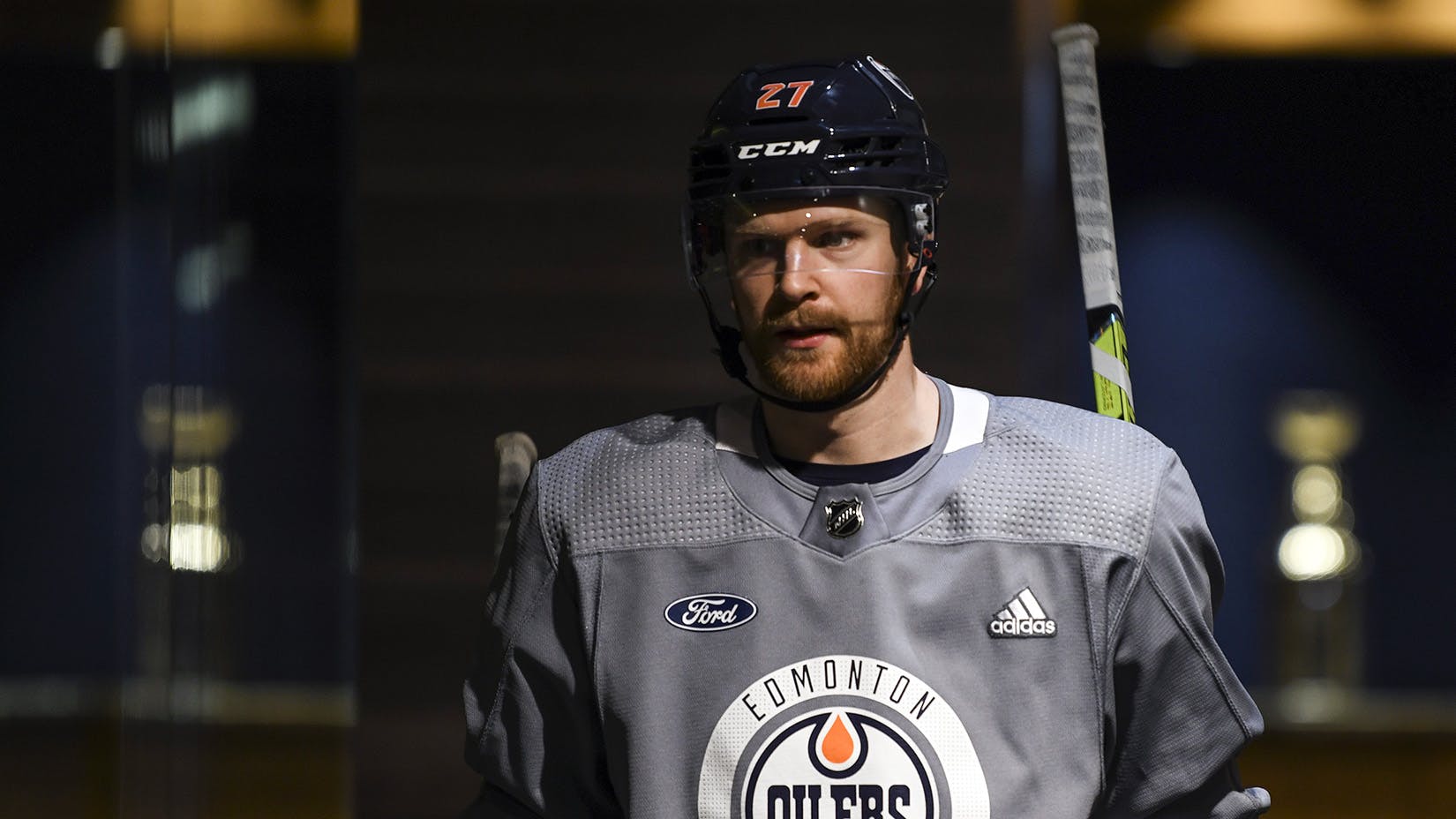 By NHL_Sid
8 months ago
Ever since the Jay Woodcroft and Dave Manson hirings, things look much more positive and encouraging for the Edmonton Oilers.
Under Woodcroft and Manson, the Oilers possess a record of 13-6-2, largely due to a significant improvement in their 5v5 performance. Since February 10, at 5v5, Edmonton ranks:
Due to these results, I thought that Ken Holland should have gone all-in at this year’s trade deadline, with the 1st round pick and several top prospects on the table. I feel that Woodcroft’s Oilers genuinely have a decent chance of contending, considering their excellent 5v5 performance under him thus far.
Holland decided not to go all-in and instead made two relatively minor moves. First, he dealt a conditional 2nd round pick, defenceman William Lagesson, and a 2024 7th round pick to Montreal for Brett Kulak. In addition, Holland also dealt a 2023 4th round pick to Philadelphia for Derick Brassard.
I think both deals are pretty solid (although the Kulak deal may be a marginal overpay if Kulak doesn’t re-sign), and I’m quite fond of Kulak and Brassard as individual players. In this piece, I’ll take a deeper look into Kulak and Brassard’s metrics, where they could/should slot in the lineup, and how they can impact Edmonton’s roster.
*All stats via EvolvingHockey, Natural Stat Trick, PuckIQ, and all microstats via Corey Sznajder
*Note: I recently developed analytical player cards for skaters, which I will frequently use in this article, and future pieces. If you’re perplexed on what some of these categories mean or represent, here’s a piece thoroughly explaining them 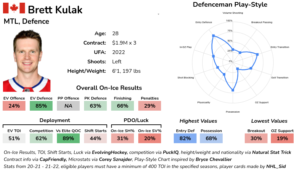 I discussed a bit about Kulak in my Trade Deadline Preview last week. Overall, he’s an exceptional defensive defenceman.
Kulak is only marginally above-average in his own end, but his defensive results are primarily caused by his skating abilities, superb entry defence metrics, and good possession numbers. In addition, Kulak can effectively play against top competition and produce strong results.
In regards to the PK, Kulak wasn’t Montreal’s most frequently-used penalty killer relative to their other players; he ranked 15th among Montreal players in SH TOI. In the short-handed minutes he did play, Kulak was a fairly reliable asset, with his PK xGA ranking in the 66th percentile.
Kulak additionally has the ability/experience to play RD. When Edmonton is protecting the lead late in the 3rd period, there is the potential option of deploying Kulak at RD to defend the lead, rather than utilizing a high-event RD such as Bouchard or Barrie.
As for Kulak’s downsides, he’s relatively poor at breakout passing. His Neutral Zone Shot Assists/60 ranks in the 43rd percentile, and his Defensive Zone Shot Assists/60 ranks in the 10th percentile. In addition, Kulak doesn’t excel at supporting forwards in the offensive zone either, with his OZ Support score ranking in the 19th percentile. He’s an excellent skater, but expect limited offence from him.

Regardless, Kulak is an amazing fit in Edmonton for several reasons, one of them being Duncan Keith’s play. 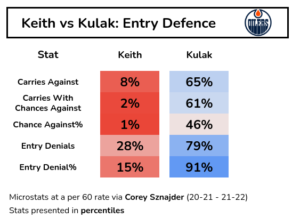 To his credit, I think Duncan Keith has surpassed my expectations this season, as I expected him to be considerably worse. However, I don’t think he’s performed exceptionally at all either, and his most significant and notable weakness has carried on from his tenure in Chicago; defending the entry.
Keith is one of the league’s worst defencemen at rush defence, and consistently allows chances against when attempting to defend the blue-line.
On the contrary, Kulak’s entry defence is his primary strength. His Entry Denial% ranks in the 91st percentile, and his overall entry defence score ranks in the 82nd percentile, which would rank first among current Edmonton defencemen by a considerable margin (Ceci ranks 2nd with his Entry Defence score ranking in the 54th percentile).
Furthermore; 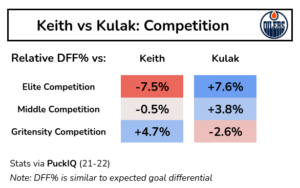 I wrote about this in detail several weeks back, but Keith’s dreadful results against top opposition are largely due to his above-mentioned weakness of struggling to hold his blue-line. His poor foot speed and gap control are consistently exposed against elite transitional players and skaters.
However, his metrics see a vast improvement when playing against 3rd/4th liners, as he can excel in a more sheltered environment. Relative to other Edmonton defencemen, Keith’s results are the most reliant on the type of competition he plays.
I feel Keith is an intelligent player, and he generally performs fine at defending in his own zone, but his mind just can’t catch up with his declining foot speed and skating at this stage of his career.
Meanwhile, Kulak’s results against various types of competition are quite peculiar, as they’re almost the exact opposite. It’s fascinating that he performs below-average against 3rd/4th liners, yet his results are excellent when he plays against the NHL’s best. Kulak has posted positive metrics against elite QOC in each of the past four seasons.
Consequently, it would be wise for Edmonton to play Keith in a limited role on the 3rd pair, while Kulak should be granted more difficult assignments, alongside the Nurse pair of course.

There are several pros and cons as to who Kulak’s partner should be, assuming Ceci is paired alongside Nurse. I developed some play-style similarity charts recently for forward lines and defence pairs, and here’s how Kulak – Bouchard looks. 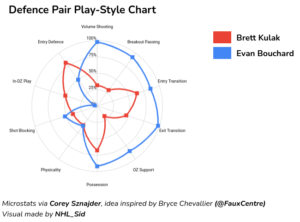 As expected, Bouchard seems like a dynamic offensive defenceman, who excels at moving and passing the puck, but is dreadful at defending in his own end. In comparison, here’s the play-style chart for Kulak – Barrie. 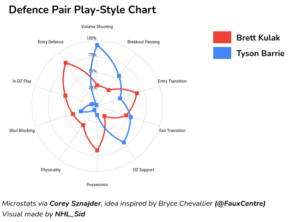 At glance, it evidently seems like Kulak – Bouchard is the superior and more well-rounded pair, but that would leave a 3rd pair of Keith – Barrie, which may be the worst defence pair in the NHL at defending the rush (Keith’s Entry Defence score ranks in the 5th percentile, Barrie’s Entry Defence score ranks in the 2nd percentile). Keith and Barrie do possess good results together, but it’s in a limited sample of merely 55 TOI, not enough to deduce an accurate conclusion.
Deploying pairs of Kulak/Bouchard and Keith/Barrie could succeed as long as the latter is extremely sheltered, while Kulak – Bouchard faces more strenuous competition.
An alternative is pairing Kulak with Barrie, and Keith with Bouchard, which is what Edmonton did against San Jose on Thursday.
This season, Keith and Bouchard have posted a 58 CF%, 64 GF%, and a 57 xGF% together, but they’re dead-even in high danger chances; in other terms, although Keith – Bouchard is dominating the possession battle, they’re OK in terms of high-quality shots. This may indicate that the duo could struggle against stronger teams.
As for the other defence pair, Barrie is above-average at breakout passing and “OZ Support,” which are Kulak’s primary flaws. It could still certainly be a fine pair from that perspective. However, Kulak isn’t an exceptional in-zone defender, while Barrie is a dreadful one, so that pair may experience troubles in the defensive zone.
There’s also the option of splitting up Nurse – Ceci, and running Kulak – Ceci as a shutdown pair with exceedingly difficult defensive deployment, while Nurse – Bouchard is deployed solely as an offensively-inclined pair. With that said,  Bouchard mightily struggled the last time he was placed on the top pair (I think it’s worth mentioning that this conundrum is exactly why I was a vocal advocate for dealing Barrie for a defensively-inclined RD).
Consequently, there are lots of different options available for Edmonton, with various advantages and disadvantages for each.
The defence core remains weak, but the acquisition of Kulak gives Edmonton much more flexibility and superior options. He can provide value to Edmonton as a solid shutdown defenceman, and I certainly feel that Edmonton should be open to extending him. 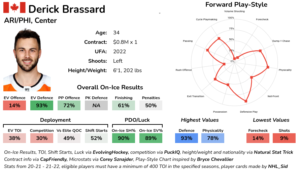 Derick Brassard is also a fascinating player. His scoring chance suppression numbers are excellent in a fairly sheltered role. In regards to microstats, Brassard’s DZ Retrieval Success Rate ranks in the 67th percentile. Numerous signs point to Brassard being a fairly reliable defensive bottom-six forward.
Here’s a breakdown of some of Brassard’s specific offensive and transitional microstats; 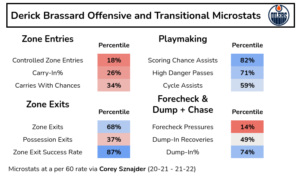 Some notes:
His overall even-strength offensive impact at generating offence is in the 14th percentile, meaning Edmonton shouldn’t expect a lot of offence at 5v5 from Brassard unless he’s deployed alongside the correct players.
In regards to the power play, however, Brassard could be a potential option for Edmonton’s PP2 unit. His PP GF/60 ranks in the 72nd percentile in the past two seasons.
As for the penalty-kill, Brassard hasn’t played over eight minutes of short-handed TOI in a single season since 2015. Twenty of Edmonton’s skaters, ten of them forwards, have played more than 8 PK TOI this season alone, so he isn’t really an option there.
Brassard isn’t a volume shooter, as he seldom shoots the puck, but his finishing impact looks good on paper. However, it’s worth mentioning that Brassard has been exceedingly lucky this season; his shooting% (14.6%) is at the highest it’s been since 2015, and his PDO is at a career high.
For those not aware, PDO is the total sum of a player’s on-ice SH% and on-ice SV%. Barring exceptions, such as players like Leon Draisaitl and Patrick Kane, most players with a PDO higher than ~1.015 or 1.02 will considerably regress in terms of goal differential. Currently, Brassard has posted a phenomenal 67% goal share at 5v5, but a PDO of 1.067, which is exceedingly unsustainable.
In regards to career-finishing, here’s how Brassard’s finishing ranks in the prior four seasons in terms of percentiles; 44%, 39%, 69%, 65%. He was a fine finisher in 17-18 and 18-19, but his most recent years suggest that Brassard will likely be an average or below-average finisher in Edmonton.
Regardless of his inflated goal share, Brassard is a useful defensive 3rd/4th liner, and should continue playing alongside RNH and Puljujarvi for the time being. Solid addition.

How good were Kulak and Brassard’s debuts in an Oilers jersey?

Kulak and Brassard’s first impressions against San Jose on Thursday were quite encouraging.
Kulak was on a pair with Tyson Barrie, and he played a total of 18:01, just 15 seconds less than Darnell Nurse. In those 18 minutes, Kulak had a 74% shot attempt differential (20 – 7 in CF), a 69% expected goal differential (0.8 – 0.3 in xG), and a 75% scoring chance differential (9 – 3 in SCF). He had just one offensive zone shift start all-night long.
Overall, I thought he had a splendid game. His smooth skating ability popped out to me.
Playing alongside Kulak, I thought Tyson Barrie had one of his best defensive efforts of the season against San Jose. If this can somewhat sustain, that’s excellent news for Edmonton.
As for Brassard, he played on a line with Ryan Nugent-Hopkins and Jesse Puljujarvi, and I felt that line was absolutely dominant. That trio posted a shot attempt share of 79% (19 – 5 in CF), an expected goal differential of 82% (0.6 – 0.1 in xG), a scoring chance differential of 80% (12 – 3 in SCF), and they were +1 in goals. They were also the only line to not allow a single high danger chance against.
Brassard scored the eventual game-winning goal, although it was a bit of a lucky bounce, deflecting off a San Jose defenceman in front of the net; nonetheless, that line was phenomenal all night, and I feel that bounce was deserved.
I think this trio can succeed in the long term, in regards to possession and scoring chances. RNH, Puljujarvi and Brassard are all exceedingly responsible defensive forwards. Puljujarvi is a below-average passer but excellent forechecker, while Brassard is the exact opposite in that sense, so they could complement each other well. However, the primary flaw with this trio is their lack of finishing, so it’ll be interesting to see how they perform in the long-run in regards to goal share.
In conclusion, although I personally would have preferred if Holland pursued superior-impact players, I certainly like the additions of Brett Kulak and Derick Brassard. Edmonton is definitely a superior team with them.
What are your thoughts on Kulak and Brassard? Where do you think they should be deployed in the lineup?
Find me on Twitter (@NHL_Sid)
Nation Takes
Oilers Talk
Recent articles from NHL_Sid